Big Fin: You know this guy.....Doc Tom holds up a Whitetail buck I shot on the Powder River in SE Montana 28 years ago this fall....our field pic taking abilities have improved a little since then!!.......grin!!
Click to expand...

Very cool buck Pat. Would love to find one like that......someday.

Doc told me he was going out last week for a big muley, not too far from where this buck was probably taken. Haven't heard how he did.
B

Doc snapped the shutter on this one....about 1980. Back then in parts of SE MT you could shoot a mule deer buck and a whitetail using your "A" tag on either or and your"B" tag on a whitetail buck.

We had some great trips down there back in the day!! Looking for more pics to scan!!
B

Dude, did you used to drive a camaro back then? You know the one with the big eagle on the hood?

I don't have any really cool vintage photos, but here's one from 1983. My first buck..

Oh, and where's the 09 elk picture? Aren't we living in the "Good 'Ol Days' for BIG elk? I don't expect to be disappointed. All the raghorns out here have escaped me.
B

Doc's whitey from one of our early 80's hunts to the Powder River.....

No Camaro....just an old beater F 250 with headers....they could hear me coming fron two counties away!!
B

My first antelope.....1971. Dad took me north of Forsyth the 2'nd weekend of the season. We were hunting out of his 61 International Scout. It had rained for two days and we had to chain up all four to get around...back then nothing was posted and you hunt about anywhere you wanted. We were'nt looking for big ones, just filling tags....I can only imagine what was runnig around out in that country back then!

That lope photo is great!
B

Doc poses with a haul from the Powder River....man those were some good times!!

Good times, I will say so.

Never knew Doc when he sported a beard. Wish we could do the one muley and one whitetail buck now, but that would be a disaster. Ah, the good 'ol days, for sure.
B

Whitetail or Mule Deer? Hmmm.....what would you choose to hunt if you had to choose only one?

Pat, that buck was 181 gross and 160 net. I think he had a 174 frame as a 5X5, but the forked eye-guards killed his net score. I have his sheds from the year before. I probably won't ever have a chance at one that good again.

Here's a shot of my first antelope - near Vida MT.

skinning whitetails in the yard with friend and sisters.. early 80s.

Awesome pics guys, love the one with the 4 bucks in the truck.
B 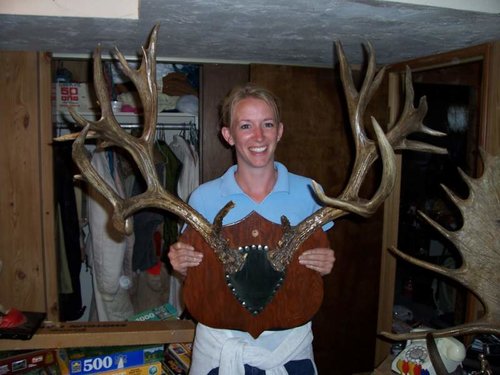 Ok I had to bribe the wife to post this picture. She had just been camping and had no makeup or hairdoo at the time. She's pretty particular about how she looks in public. Now the buck in the picture. It sits in a basement closet in Blackfoot Id. It belongs to my brothers wife's uncle (jack). This buck is in the "Idaho's Greatest Mule Deer" I believe it was shot in the late 50's near Soda Springs. If I remember right it scores in the 230's? It is an abosolute hog as you can see. What a shame that Uncle Jack won't get it mounted. Was awesome to get a shot of it on camera though. 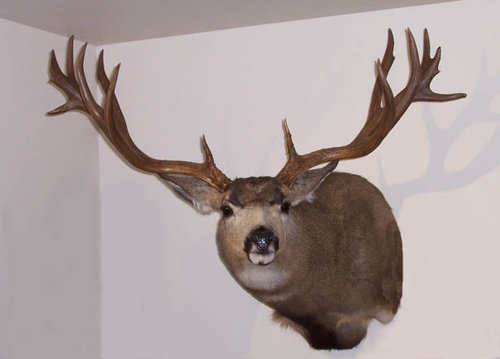 Ok this is my wifes Grandpa's buck from Soda Springs as well. Shot in the early 50's not too far from the first buck. This buck is also in the above mentioned book. I had the honor of having this buck on my wall for about 3 months. It has totally ruined me for judging mule deer. Nothing I will ever see will come close. This buck was on a plaque above his computer forever. When I saw it I couldn't believe it hadn't been mounted. I brought it home and had Jerry Andres mount it for me to give to him for Father's Day. He about cried when I gave it to him. He said it looked just like the day he shot it. He said that when he walked onto it that it had it's head down looking "sneaky" at him. It was cool to see him reflect on the hunt that gave him this buck. The crazy thing is that this isn't even the biggest deer he had shot. He had one that someone talked him into entering a "Big Buck" contest. Well it won and he never saw his horns again. He said it was an absolute monster. He told me of the numbers of huge bucks they shot and cut the heads off only to pack out the meat out He's an awesome guy with some incredible mule deer stories. I'll try to dig up an old photo of his father with a big one. I saw it once at a family reunion. Just in case your wondering. His buck is 37" inside I think Fred King scored it at 221. Enjoy
B

Awesome bucks Lawnboy, cool to be able to look them up in Idaho Muley book as well.

Pat, I've always liked the looks of your unit 11 Idaho buck as well since I basically grew up on that mountain.