A lot of guys have pics and stories of themselves, their parents, or grandparents, that date back a few years. It is always fun to hear those stories and see the old pics.

If you have some things you want to share from "Back in the Day," post 'em up. We will see how well this is received.
D

Here are a few of my favorites from day's gone by: Grandpa, Mom and Me. I also have the pleasure of owning all the rifles in the pictures, Mom still gives me chit about my camo wasn't big back in the day!

Lets see what you got Fin.

I know most have seen these pics of my grandpa and his 37.5" buck from way back when but I figured I would post them again because I never get tired of looking at it! This is an Idaho buck shot with an old Remington model 760 .270 pump action rifle with iron sights. I don't know what year but I think it was back in the 50's. 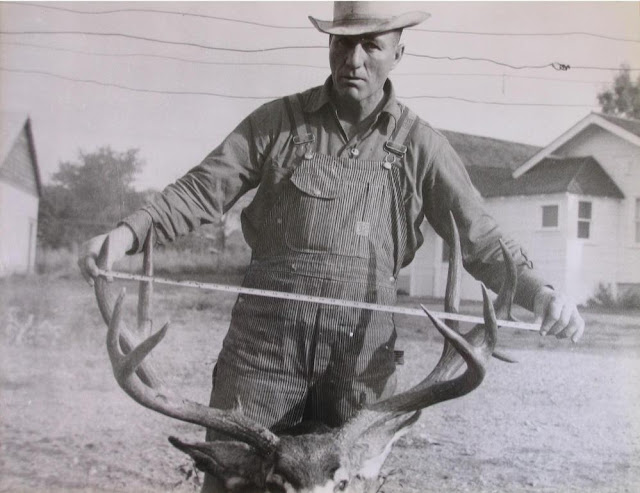 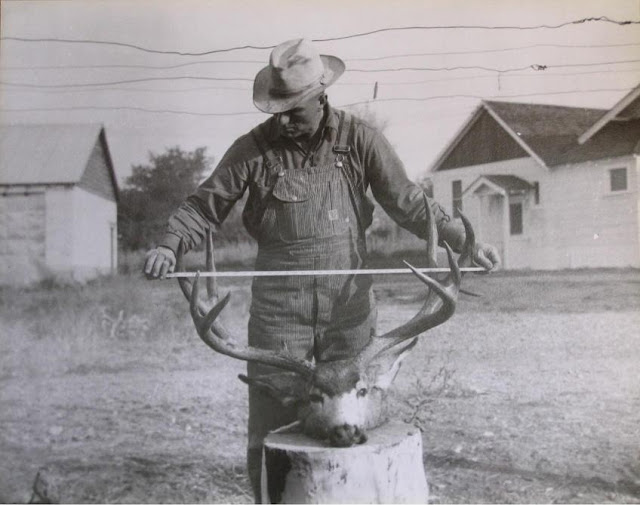 Cool stuff guys. Glad we started this one.

I don't have much old stuff, but love to read and see that from other guys.

Don't have a story for this pic. I didn't come across it till after my grandpa had passed.

But the buck was taken in the Bear Lake area in the 50's. The pic was snapped in Montpelier Idaho.

my grandpa and his brother.

Here's one of my prized photo's from way back. Some of you will know this ram as the "Chadwick Ram" On the left is Roy Hargraves, on the right is Frank Golata....this is the only field picture I've ever seen of this great ram. It was given to me by the late Duncan Gilchrist. This world Record Stone Sheep is considered by many to be the greatest trophy ever taken in North America. Both horns are over 50" long!!

Wow that is awesome breaksrunner thanks.


I'm your "Huckleberry":hump:... now I will start looking
C

awesome pics guys. I wish I had some left, but fire took everything that my dad had a few years back. thanks for sharing.

Here is a short tale of a Hunt in the late 60's, no pictures. When Whitetail deer started being hunted big time in Louisiana there was Open Land everywhere because the Timber companies let you hunt on their land. It was sorta the same as what you have in the west as far as opportunities to hunt.
I was 13 or so when this took place, my uncle Marshall was the Head Huntsman for a group of Uncles, brothers (He was 1 of 18!!!!) cousins and people he worked with at the Paper Mill in Monroe, Louisiana. It always started with loading up the big dogs into the pickup and getting the horses saddled and loaded. Then everyone met at the Mt. Ida Baptist Church or at Whorley Hill. I can remember the old red clay roads and some of the people even today.
This day was a little different in that it was a Doe day, one of maybe 2 per season. We went to be put on "Stand" as I was a stander today as usual which I didn't mind because about mid morning Aunt Betty would come by with thick ham sandwiches and a hot sweet potato and hot chocolate. It was a festival during those holiday hunts!
As I am standing there a man and his son-in-law come by with a secret device....a ladder stand! This thing could not have been 6' tall with a flat plywood seat! The Old man had made his son-in-law drag that thing to a spot he knew about in the woods just before the dogs were turned loose. The old man had shown us his single shot shotgun before the hunt and his 5 shell wrapped in wax paper, an 8 guage!
As the hunt started I could hear the dogs headed mu way then turn towards where the old man (80;s) was sitting when BOOM! I tell ya the leaves started falling, here comes the son-in-law to pick up the old man and when they come out there lays a Forkhorn on top of his dog box. Those were some Good Ol Days. John

Some great bucks and good stories! Keep them coming!
B

That's me holding the rifle...one of the first Ruger M77s ever built....late 60s. Buck was killed in the Crazy Mountains, Montana

1966, South Texas Whitetails. My Mother in these photos. 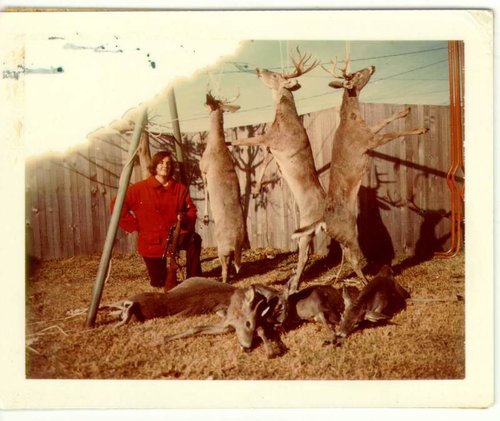 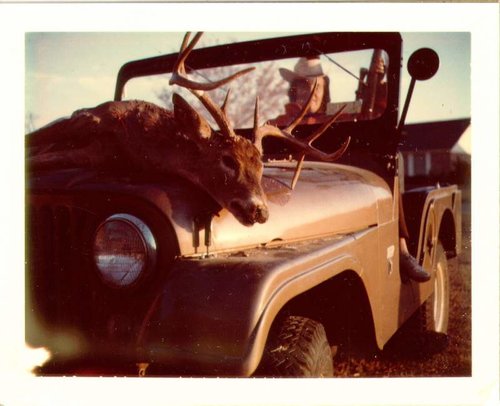 Wow, I love all these old pics. Great idea for a post.
B

Big Fin: You know this guy.....Doc Tom holds up a Whitetail buck I shot on the Powder River in SE Montana 28 years ago this fall....our field pic taking abilities have improved a little since then!!.......grin!!
B