Europe said:
not that come up over you head---ie: when crawling through grass (-: (-:
Click to expand...

I was walking through an area north of Douglas, WY and hear a rattle that was similar but a little different from the grasshoppers I had been hearing so I froze until I was able to determine where the sound was coming from. 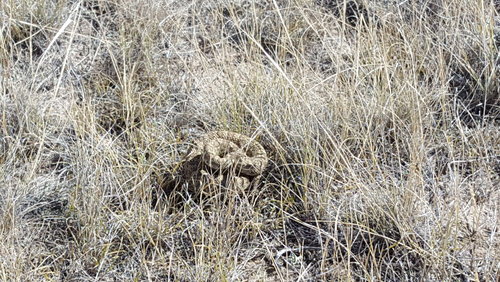 JeffJ said:
Think I'd take the Marcus approach, at least once.
Click to expand...

A recipe I copy and pasted from another page:

You are being redirected...

I found this guy two weeks ago at 5,000ft in the Sierra. He just wanted to bask in the sun, but I followed him for a bit until he decided to coil up so I could get a photo. 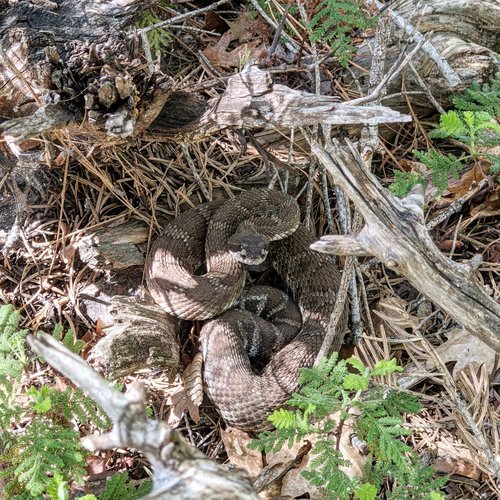 Here is a pic of a Rattlesnake I caught at the lake just north of home.
Lake Pleasant in central Az.
He was swimming along and I caught it bare handed.Threw it back and it
swam right back to the boat.(the only cover around).I threw it back again
and when it came back my uncle Joe to my right grabbed it mid-body and it struck
at him and missed.
I was then blamed for a near catastrophe in the family...I didn't tell him to pick
up a live Rattlesnake-Geez!
I should have had my bird dogs with me! 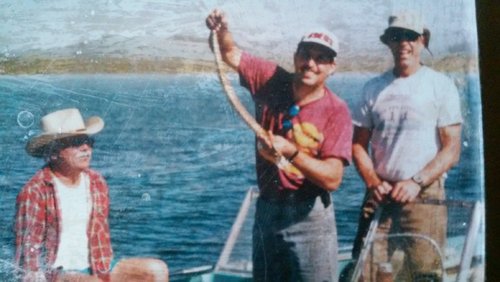 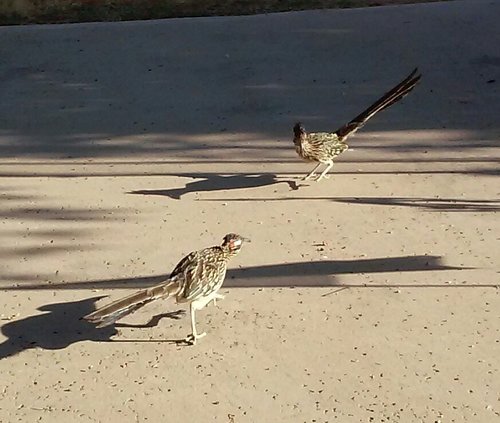 I was muzzleloader hunting in northern New Mexico about a decade ago. Lots of sage and tended to be in thick patches. Some of the sage was waist-high and other about mid-calf. I was walking though a basin on the along the hillside and the rocks were a rough go side-hilling so dropped into the waist-high sage at the bottom of the shallow basin on a windy day. I wear hearing aids and the technology has greatly improved now but back then wind gusts could make them whistle and even when no wind interference what you heard was directionally hard to pin down. Anyway, am about 10 big strides into a thick patch of sage where you walk by zig-zag but really can't see much including your feet at times. 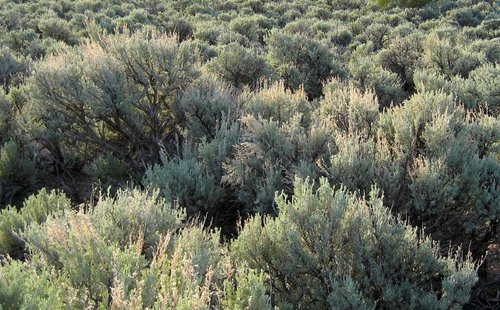 I clearly hear a buzzing rattle. Was definitely a rattle as had bumped two smaller rattlesnakes on this hunt and I saw them each before they rattled so I gave them a wide berth.

So, I freeze in the sage patch. Wearing shorts, no snake gear. I have no idea if the rattle is behind, in front, to left or right. I freeze. I can see patches of soil but not my feet and no snake is obvious. A few seconds go by and more rattling as the wind gusts and my hearing aids act up. The rattling seems more vigorous and maybe closer. I only have a day pack on and the muzzleloader so I am relatively light-footed so with adrenaline pumping I hop-skip-jump back out of that sage. Not sure if was better than my high school efforts but I was clear and inspected my shins as they had scraped the sage or were they bit? Just sage. I pick up a rock and toss near where I was in the sage. Rattling.

Not ever seeing that snake messed with my mind. Could have been the smallest rattler in NM or the largest. I never have looked at a patch of sage as nonchalantly ever again.
G

I like snakes myself and have only killed two. One to see what it taste like (pretty good) and one to protect my dog. 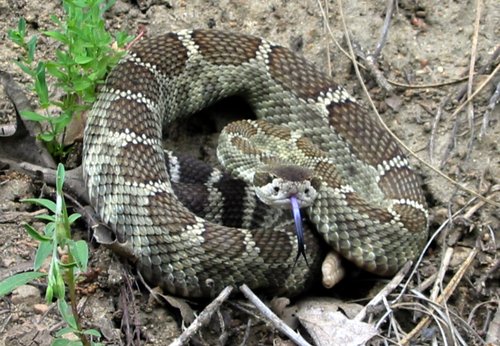 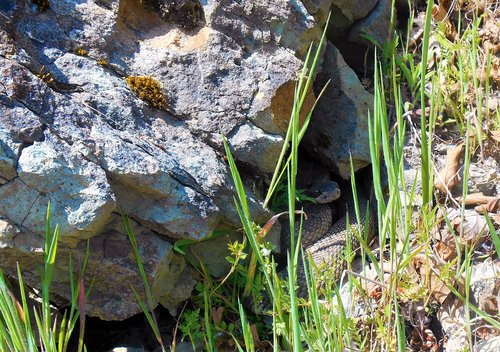 No pics from this past weekend cause I was hiking too fast to stop while looking for elk sheds, but I had 2 different rattles at my feet when climbing up and over a rocky slope, I jumped the hell outta there and got off that rock slope in a hurry!

We've had a few encounters with rattlers over the years but didn't take many pics. I've seen them as high as about 8,000 ft in the Ruby's of NV. We seen them pretty regularly when dove hunting in the desert near waterholes.
We found this guy during an Aug. bowhunt in southern NV. He was under a bush right next to the only water we could find for miles around probably waiting for a small meal to come get a drink. 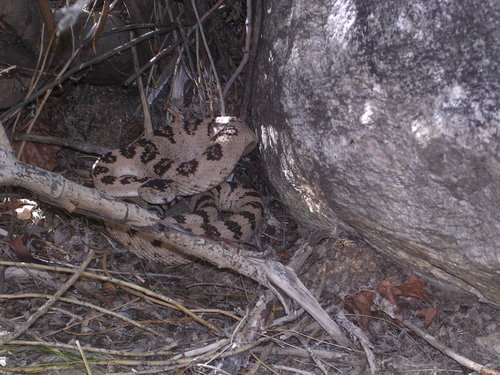 Nope, nope, nope. South Dakota does not have them, it is all a lie!

I try to keep an eye out for them, but I have been lucky to never come face to face with them!

My feeling is you should be able to hunt non-endangered rattlesnakes and other snakes on a small game or special license. Some of us do enjoy hunting and eating them. 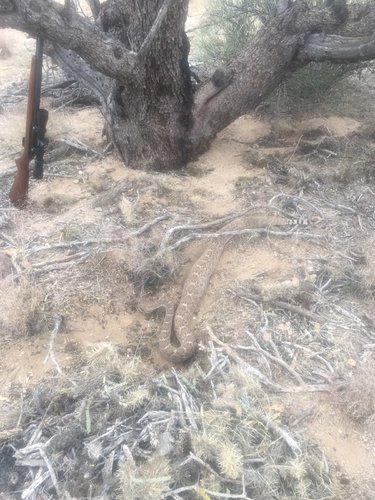 Sonoran western diamondback. SOAZ. Stumbled up on him when we stopped to dress a rabbit out on Turkey Day 2018. This brute is just over 5ft long with 14 buttons. Very dull skin and he couldn't hardly see. Sniffer was working tho as he slid down into the packrat nest hole the loop of body is over. I went and watched the other exit of the nest and mister packrat zipped on by pretty quick. The largest WD the Sonoran Desert museum has a record of was only 4.5ft long. We just look and leave them be. Not worth the risk to mess with them. However had it been a bright Mojave Diamondback freshly shed at 2ft or so it would be a hatband now. Later in Jan '19 I stepped right over another WD in the trail. No pic of that one tho. The Mojaves are the most vicious and lethal. They tend to be green in color. If your not aware anti-snake vaccine runs at $80k or more per dose. If bitten get an ambulance ASAP and get to a hospital. Don't go to urgent care because your insurance wont cover the cost of vaccine. Snake bite is a true emergency and must be treated immediately. If out in the backcountry call in a lifeflight. Insurance will cover everything.
Last edited by a moderator: May 22, 2020

JDH said:
I was walking through an area north of Douglas, WY and hear a rattle that was similar but a little different from the grasshoppers I had been hearing so I froze until I was able to determine where the sound was coming from.

I had a similar experience hunting outside of Douglas years ago. I was standing still glassing a small river bottom when I heard something fly by my ear twice — or so I thought. I started looking around thinking I was getting dive-bombed by some kinda bird. Turned out it was a rattler hissing at me. It never rattled until I made eye contact with it.

I don’t mind snakes too much but I generally ignore them. They do come in useful sometimes though...

I came across a huge one a few years ago, and he was just too aggressive and near a popular hiking area, so he got a facefull of 3.5" steel BB. Why was I carrying a SBE II full of 3.5 BB? Well, I just bought it and wanted to see how it carried, and what kind of fool carries an empty shotgun? Turned out bad for that buzz worm.

I have ran into several while out coues deer hunting in AZ during the October and November hunts but never taken any pics.
I was packing out a mule deer from the Nov hunt in NM with my gear and I ran into these lovers. I actually jumped over them somehow when I almost stepped on them. If someone was there to watch that scenario I am sure they would have died laughing. 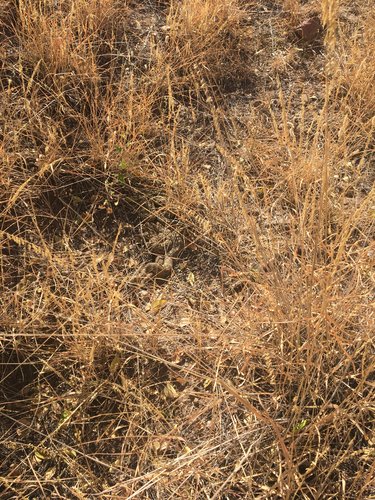 Jim/Wa said:
I had a similar experience hunting outside of Douglas years ago. I was standing still glassing a small river bottom when I heard something fly by my ear twice — or so I thought. I started looking around thinking I was getting dive-bombed by some kinda bird. Turned out it was a rattler hissing at me. It never rattled until I made eye contact with it.
Click to expand...

Rattlesnakes Hissing???
Only in Wa!!,Ha!,Ha!

Yes, rattlesnakes can swim! No pictures, but I was kayak fishing on the Texas coast and paddled up to a sandbar island for lunch and a beer. I was not thinking about rattlers at all, and walked right by about a 4-5' snake. I never heard him rattle due to the sound of the waves hitting the island. My fishing partner being from west Texas saw the snake right away, and clubbed it with his stake out pole.
S

You guys south of the border and your snakes are crazy...

If you told me unit A was loaded with grizzly and unit B was full of snakes I'm going head first into unit A no question. I dont know what it is but I am deathly afraid of snakes!
You must log in or register to reply here.
Share:
Facebook Twitter Reddit Pinterest Tumblr WhatsApp Email Link
Top