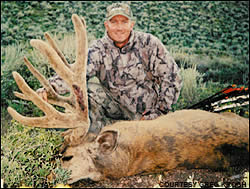 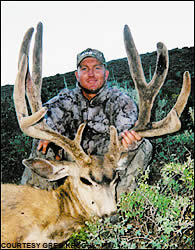 Nevada muley could be among archery's best

For archers who love to chase hat-racked mule deer around the West, this is a story that surely will make you envious.

Described as a velvet-antlered basic 4X4 typical mule deer with eye-guards,
the deer recently was green-scored. Aside from the typical frame, it sports one abnormal point that measures less than 1 4/8 inches in length.

That all results in a huge typical mule deer buck with a green gross score of 211 1/8 inches and a green net score of 206 0/8 inches, according to Krogh.

While Krogh admits he loves mule deer bucks sporting fuzzy antlers, he is unsure of which of the Pope & Young Club's two typical mule deer categories he will enter the deer.

Either way, the buck appears to have the potential to claim the top spot in the P&Y record book.

If Krogh strips the velvet off the buck's antlers, the hard-horned deer could threaten to unseat the current P&Y world record mule deer buck, a 203 1/8 inch buck killed by Bill Barcus a quarter-century ago.

“ If it had been anyone else other than Randy Ulmer describing this buck to me, I wouldn't have spent 29 days chasing this buck without seeing him. ”
— Arizona bowhunter Greg Krogh

Should Krogh elect to keep the velvet, the deer has the potential to unseat the top fuzzy-horned mule deer, a 202 6/8 inch 5X5 arrowed by Joe W. Schmidt near Saskatchewan's Goose Lake in 2001.

Krogh went to great lengths to make it understood he isn't claiming his buck to be a new world record, only that the buck appears to be in that neighborhood.

He still must endure the completion of the mandatory 60-day drying period and the obtaining of an official entry score after drying, as well as possible future panel scoring efforts.

He also was careful to note he wouldn't have even known that the massive mule deer even existed had it not been for his good pal, Arizona bowhunter Randy Ulmer.

"This buck was originally found by Randy Ulmer while he was elk hunting with me in August 2003 in central Nevada," said Krogh, owner of Arizona's Mogollon Rim Outfitters.

Ulmer also is one of bowhunting's top archers, especially when it comes to tagging big bull elk and mule deer bucks. On the elk hunt described by Krogh above, Ulmer shot a massive Nevada non-typical bull that scored 409 7/8 inches, the largest such archery bull ever harvested in the state.


Krogh had been visualizing the muley buck for a year since it was first described to him.

But it was the monster muley that Ulmer saw during that particular elk hunt that kept Krogh's mind spinning for the past 12 months.

"Between the time that Randy saw the deer in August 2003 and the time that I killed him, I spent a total of 29 days looking for him," Krogh said.

"If it had been anyone else other than Randy Ulmer describing this buck to me, I wouldn't have spent 29 days chasing this buck without seeing him."

As this year's archery mule deer season approached, Krogh finally laid his own two eyes on the massive buck.

"I finally found him three days before I killed him," he said. "Upon seeing him for the first time, I realized why Randy was so excited that night a year ago."

Krogh also was quick to express thanks to his pal Doug Bodhaine of Kentucky, who traveled to Nevada to help Krogh during his hunt.

Bodhaine sat and glassed while Krogh stalked the gagger-size buck, providing hand signals when necessary to let the stalking archer know what the mule deer was doing.

The classic Western mule deer spot-and-stalk bowhunt ended when Krogh finally got archery close for a mid-morning shot at the buck.

"I think he was just as excited as I was even though he was looking at the buck through binoculars," Krogh said.

And deservedly so. As the record books prove, mule deer bucks of this world-class magnitude are rare, even in the monster-muley-rich state of Nevada.
E

That is fuggin awesome! Thanks for passing on the pictures and story.

Nice buck and story
You must log in or register to reply here.