I was lucky enough to punch my tag opening week in western MT. I found my hunting grounds by going over my maps looking for areas with little or no road access. I immediately found a good looking area within an hour or so of home so I ground checked it with Google Earth. What I saw looked good, a steep 1/2 mile would put me on a ridge above a series of remote basins walled in by cliffs, with good water supplies in all of them. The next chance I had I went up and did the 1/2 mile hike in the dark. I called into the first two basins with no answer, and reached the third by about 8 am. I called into that basin too but no answers. I sat and glassed for a good hour or so before I spotted elk bedded 450 yards straight down the cliff/rock slide below me. The wind was swirling so hard I didn't dare get on the same level with them so I sat and watched. All told I sat for 6 hours before I made my move. From what I could tell the herd had a couple spikes, 1 cow, and 2 or 3 branch antlered bulls. One of the spikes and the cow were "together" through most of the day while a couple bulls spent most of the day bedded within 20 yards of each other. Towards mid afternoon I figured they would get up to feed and my chances were better with them up and moving rather than being bedded. The wind had calmed considerably so I started down into the basin. It was only 1/4 mile below the ridge to where the elk were but it has to be the steepest 1/4 mile I've ever done. As I dropped down I spied one of the bulls still bedded at 200 yards with his eyes closed....exciting! When I reached the bottom of the basin I did my best to sneak quietly into the timber the elk were hanging in all day. After a short time an elk walked by me within bow range, it was the spike and the cow was right behind him. I watched them feed by for a couple minutes until I could barley see them through trees before I continued sneaking on. I soon reached the last spot I had seen the branch antlered bulls and was standing in the shadows with an arrow knocked when I saw some movement below me that turned out to be my bull's antlers sticking out from behind a tree as he fed. I ranged him and drew back, after a few seconds he stepped forward and he gave me a perfect broadside shot. He tipped over within 22 yards of where he was standing when I released my arrow. I quartered him and built a makeshift rack on some downed logs with branches and set the quarters on them to cool and strapped the head on my pack for the hike out that night. One of the great things about hunting in the middle of the week is that everyone else is at work, one of the bad things about it is when you need help packing meat everyone else is at work. I ended up packing out the bull solo, 161 pounds for just the meat on the butchers scales. I was pretty dang happy to be able to pick a spot off a map and kill a bull my first time putting boots there, sure makes up for the long elkless days. 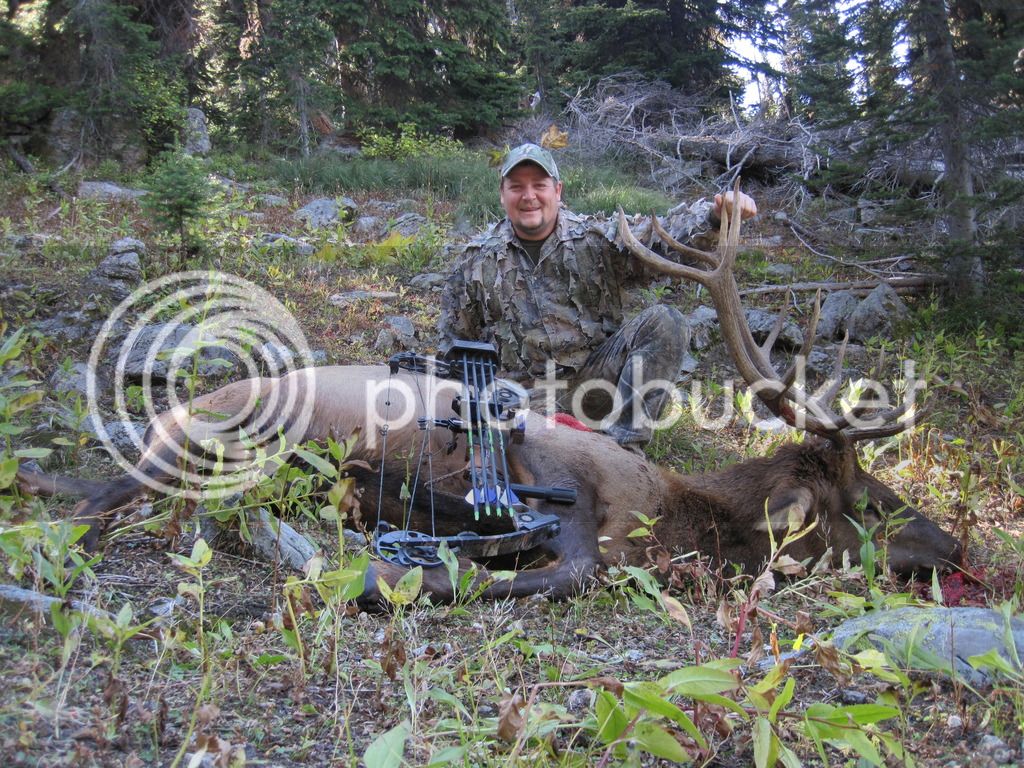 Attaboy! Congrats on the elk.

Nice! Wasting no time and getting it done!
There's definitely cons that go along with the pros on mid week hunting! However, the pros win!
Congratulations on a nice bull!

Dang, first off a beautiful buck and now this! Congratulations man!

Very nicely done. Thanks for sharing.

Congrats on your bull. Exciting when it all comes together!

Sounds like a perfect hunt. Congrats on the nice bull!

Awesome sounding hunt, congrats! Nothing better than hunting elk in September, shame it only comes once a year.

Looks like a perfect shot. Nice job! Had to be fun packing him out by yourself.

Very nice, good job of getting it done..
R

That's what I love to see, Thanks for sharing.
R

Throwing caution to the wind while his hunting partner is beyond reach, he #keepshammering #beastmode style. He scales into the rocky crevace to slay the antlered beast.

The baby fat really came of that kid, wow.

Congrats on the bull! There really isnt a better feeling doing your own research and immediately finding game in the area you've been looking at.

Way to go, Ryan! I
You must log in or register to reply here.