Lets see your first deer pics!! this could be fun!

Lets all dig out our first deer pics, or first deer that you have a pic of. I will scan one here if i can find it to start it off.

Lets also post some funny pics if you got them

O.K. check out this young strapping 12yr old with his first deer. It took like a million years to top it. Check out the moon boots! remember when they were popular???

Man i found a couple funny ones here in an old album. i will get time later this weekend to do some scanning. The memories come back to me when i see pics of me wearing "treebark" camo. Man did that stuff suck! old army camo was way better but the treebark was a fad, unless you hunted in grey trees

Luck was on my side with my first buck taken the last 10 minutes of the hunt driving the road to leave hunting camp
33 inch outside spread craby forks but the 29 inch main beams made up for it 182 net
and I wone a 270 savage in the local big buck contest with this buck
http://www.ontargetoutfitters.com/firstbuck.htm
E

This is sure to get a laugh! 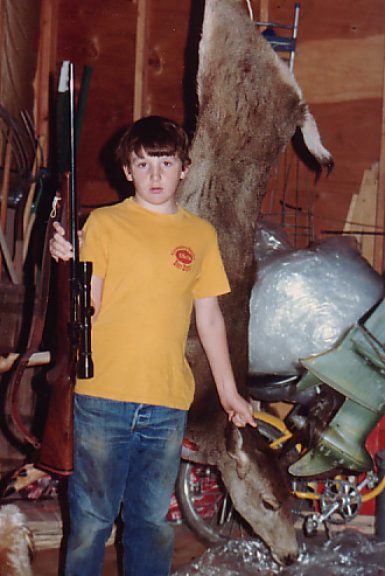 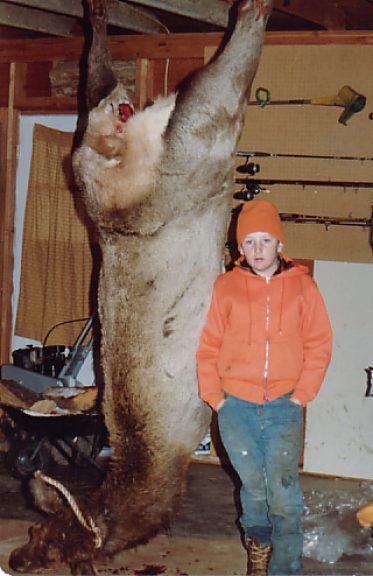 I can't help but notice how happy Buzz & schmalts look.

I wish I could find a picture of me with my first deer. I remember I at least had a smile of joy and happiness.

Here's my first, at the ripe old age of 14. I look a little happier than the others. Guess I just hadn't mastered the cool, nonchalant look.

Buzz, my first elk pic looks almost exactly like that, except the elk was already skinned!

Oak, you sure that wasnt last year?? LOL You look the same!!!

My first buck was a little whitetail. Got him with a 12 gauge slug in the river bottoms.

This is my first buck 3x3 western count i was 17 my dad would not let us hunt big game till we were 16. taken on onion MT near Camp verde AZ 1971

This feels like a thread worth reviving. Dusting off this one because it never got the traction it deserved.

This is Dad and me with my first deer in the Absaroka-Beartooth Wilderness north of Gardiner, MT. I was 12. 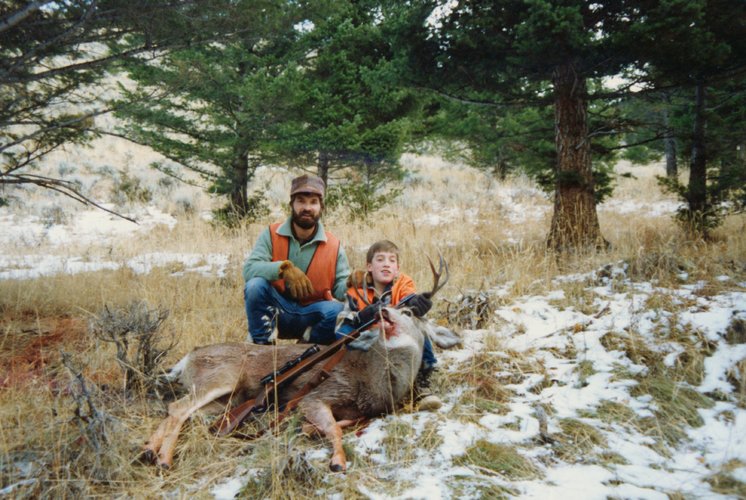 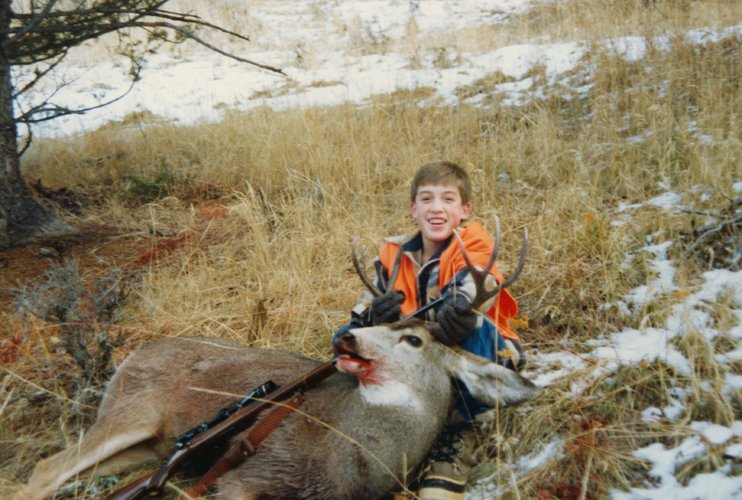 Man it sucks this thread is so old a lot of the pictures are gone. No picture of me with my badass moon boots
S

schmalts said:
Man it sucks this thread is so old a lot of the pictures are gone. No picture of me with my badass moon boots
Click to expand...

not you but me with my moon boots. Last day of 95 season. A lot of snow poor deer could not even run I shot over it 4 times but the fifth time was a charm and my 12 year old self was so proud.

My first deer when I was 12, north central Montana. 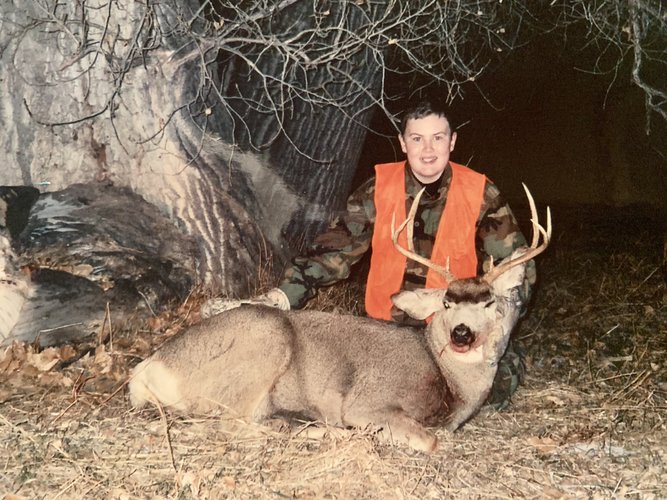 Man, I got a late start compared to you guys. I shot my first buck in the first hour of my first day deer hunting. Boy I thought he was a monster at the time! I think this was 2008 so I was 28. Back when I didn’t even have a “hunting” rifle. 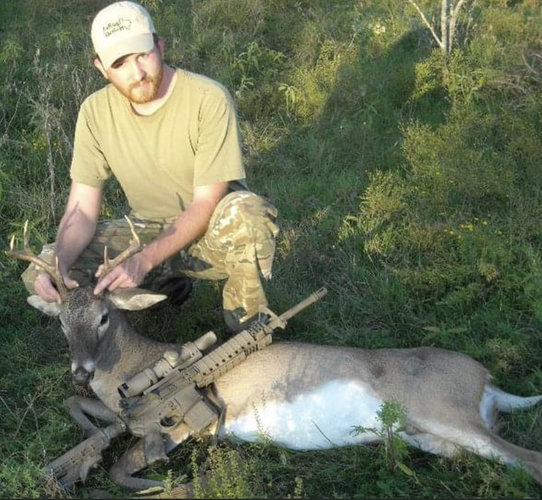 Man, this might be the oldest thread I've had the opportunity to contribute to: 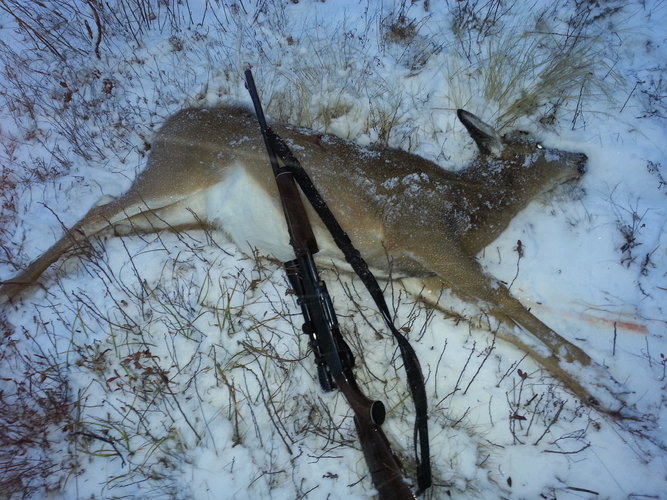 I left my knife up on the mountain after dressing this deer and had to hike back up after it. Looking at it now, that's not a big rifle which makes it an even smaller deer than I remember lol 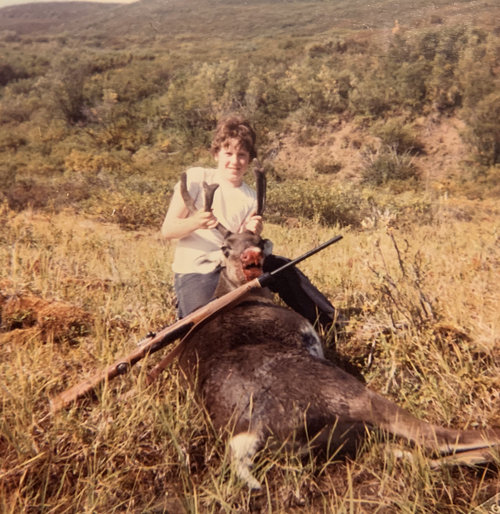 it happened so fast , I was alone, dad was taking a nap in the tent , it was like mid day I went to go exploring around camp and dad told me to take my rifle I don’t know how long I was gone but there was some kind of a hole that was full of water I came across and I just remember standing there staring down into it and then I look up and there’s this Caribou like 30 or 40 yards away that just appeared out of no where and he was just staring at me I was probably the first person it had ever seen in its life, I dropped to one knee and shot it, next thing I know you see dad‘s head popping up over the bushes looking left looking right trying to figure out where I was and he makes it over to me and he was kicking himself because he didn’t get to see me kill my first big game animal and I don’t think he really thought that I was going to shoot one.

So he sends me back to camp to get some stuff while he starts messing with the animal and I remember running back to camp and when I’m almost to camp over the ridge just 50 yds or so in front of camp on the rise above our tent walks the biggest freaking Caribou with the sun behind it and you see this giant shadow of this lone bull on the hillside looking at us with this massive rack and he just stands there and I’m yelling back at dad look at that thing and he just stood there staring at me and it just walked off that was my first Caribou hunt.

I don’t even remember if that was a male or female Caribou we don’t have the rack anymore and little did I know you’re not supposed to shoot the first thing you see on a hunt like that , dad was asleep I blame him

, I did get a decent size Caribou when I was 16 which hangs in my house today and little did I know then that would be the last one I ever got because we left Alaska a year later and I’ve never been back except once for a vacation

Don't have pics of my first buck, but i do have a picture of my first mule deer buck, unfortunately my dad was not the best photographer. 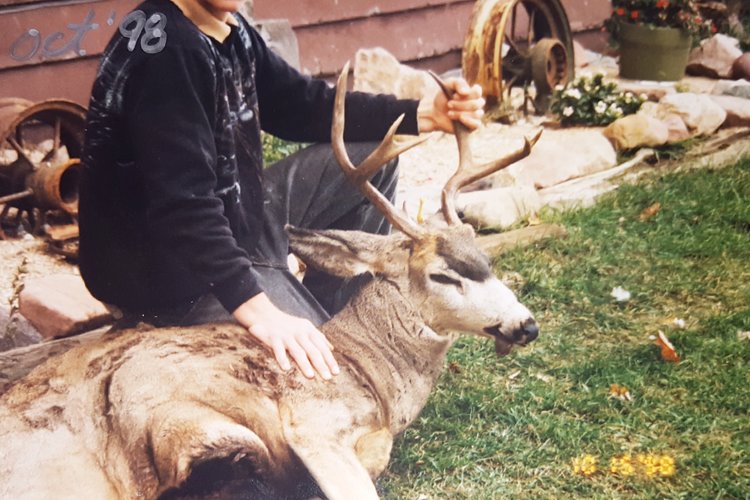 I don't have a picture of my first deer or my second. I didn't take any hunting related pictures until I was 17 or 18. this was my third deer and some other trophies. 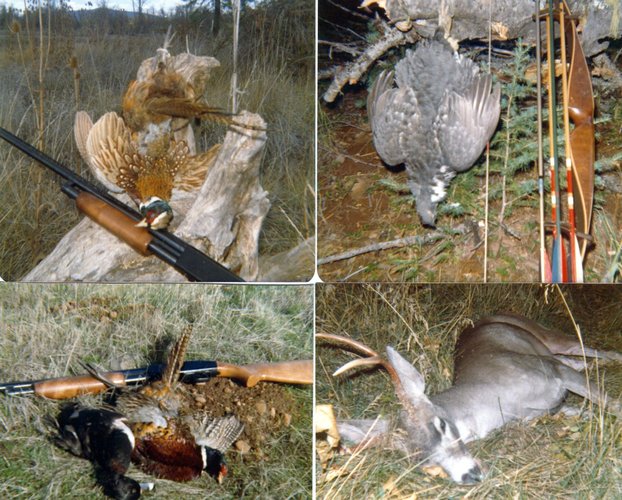 I didn't get the hunting itch til I was 31. Ater coming up empty in my first hunting season of my home state of CA, i made the trip to my good friends place in Ohio for a 5 day hunting spree. There i tagged my first ever deer, and its an adrenaline rush like no other. He aint got a huge rack, but i couldnt have been more proud of him (and myself) nor could i argue with the 75lbs of meat i got to bring home.

P
One of the best days of hunting of my life