I have a very nice used Kimber Montana in 300 wsm for sale. the gun looks new and is in very good condition. The only flaw that I can see is a small mark on the under side of the barrel. I don't know how it shoots because I've never shot it. I bought it 3 weeks ago and have to sell it because I just bought a new Howa Alpine Mt rifle. I have lots of pictures if anyone is interested. Asking $950 I don't cant do flickr here at work so i'll try to attatch a photo and see how it goes. I'm in the St Louis Missouri area or can ship. 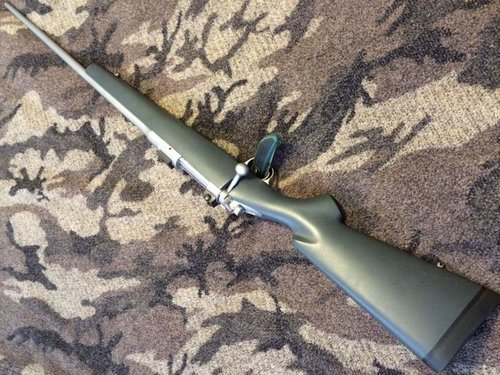 Great looking rifle. I'd be tempted if my safe wasn't already overflowing into a 2nd safe; which is already full! Which, is not a bad thing.

These rifles are awesomely light weight and from what I've read, shoot very well. They carry even better with being about 5.5# and sporting a 22" or 24" barrel. Would be around 6.5# after mounting a new Leupold VX 3i either 2.5-8 or 3.5-10; maybe with CDS. Somebody should jump on this.... quickly!
M

I was looking hard for a Kimber Montana in .308 and came across this one and couldn't afford not to buy it even though I wanted the lighter in weight .308. This 300wsm is right at 6lbs 2 oz on my scale with a 24" barrel. Fortunately and unfortunately last Friday I stumbled upon the Howa Alpine in .308 on gunbroker that I had been searching for and had to buy it. That purchase made rifle #3 in the last 2 months. so I'm going to try to unload this Kimber. Its a very nice gun, comes with the Kimber bases that work with Leupold rings. the trigger is very nice and crisp. If I cant sell it I wont be heartbroken since it will be a super nice gun to have. it looks like it was used very little.

Awesome platform for an awesome round IMO. Wish you could keep it....coz you're gonna wish you had.
M

noharleyyet said:
Awesome platform for an awesome round IMO. Wish you could keep it....coz you're gonna wish you had.
Click to expand...

I know! I kinda hope I cant sell it. I would like to keep it

Whatever you do, don't shoot it. I had one of those moments where I figured it wouldn't hurt to make what I thought was a low-ball bid on a Kimber Montana (in 325wsm) at an estate auction. Next think I knew I owned a gun that I didn't think I could justify, but I decided to just try one box of bullets. I thought it would kick like a mule and wouldn't be very accurate. Both assumptions were dead wrong and now I can't give it up. Its time to start planning some hunts that will justify owning it.
1

Melman said:
I know! I kinda hope I cant sell it. I would like to keep it
Click to expand...

It would make a dandy 6.5 SAUM!! I had a Kimber 300WSM that I had intended to rebarrel, but sold it one fall when I drew too many tags.

What is the weight and barrel length?

One piece of advice I learned along time ago" buy guns, don't sell them" you'll regret it forever......
M

sneakypete said:
One piece of advice I learned along time ago" buy guns, don't sell them" you'll regret it forever......
Click to expand...

I agree with you. I put it on gunbroker this weekend and already hope it doesn't sell. Its just too nice of a gun and I got it for a steal, only paid $825 for it!

Seems I can never find the buyer that's as hot for what I'm selling as I was when I purchased it. 825 sounds like a keeper if it shoots.
M

Schaaf said:
Looks an awful lot like a Howa Alpine mountain I saw in another thread haha
Click to expand...

HA, yes it does. speaking of the Howa. I got the new cerakoted floorplate and a hat from Matt at Legacy sports yesterday. was nice to see they value their customers at LSI.
M

noharleyyet said:
Seems I can never find the buyer that's as hot for what I'm selling as I was when I purchased it. 825 sounds like a keeper if it shoots.
Click to expand...

I agree, unfortunately the Howa Alpine I bought also required a scope and rings and this Kimber will need optics as well. pretty soon $825 becomes well over $1000 and the wife doesn't understand the necessity of a 300wsm when I have 7 other rifles in the safe. in her defense, she did say "keep it" so I have that going for me

You got the word from the boss, remove it from gunbroker!

I forgot to take a picture of it with the Leupold VX-IIIi 4-14x scope on it from Schmalts, but did manage to get it sighted in this week finally. It seems to like the lighter bullets over the 180's but I think it is going to work. Just under 1" if I'm measuring it correctly. Better group than anything I've ever gotten out of my 7mm Rem Mag Browning A-Bolt and according to the scale this setup is right at 2 pounds lighter! 7 lbs 6 oz with the scope mounted. 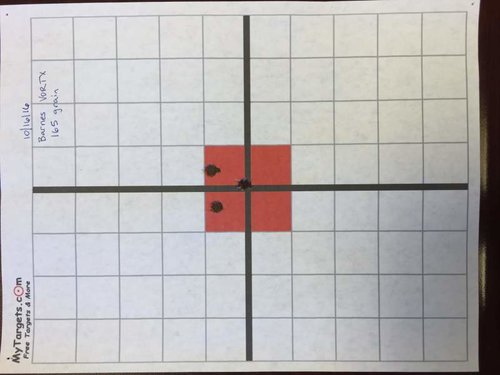