I love the sound of turkeys in the morning

So far this spring, every time we’ve planned to try turkey hunting there’s been a blizzard. I’m currently sitting at home because the office still has no power almost a week after the last blizzard. Having no access to most of my work files is all the excuse I needed today to run out and harass gobblers.

Scene 1: Went in mostly blind, but could hear one in the tree from the first place I stopped to listen, so I wandered out in the dark and set up. As it got lighter, more started gobbling beyond the one I was set up on. Uh oh. He responded to me right up until he hit the ground. Then he left in search of the flock of real turkeys down on the creek. Eventually they all ended up across the creek, so I left those ones alone for another morning. Strike one.

Scene 2: Driving to look over another location where I saw turkeys yesterday while out visiting sage grouse leks. Lo and behold, there’s one gobbler and three hens sitting in a little saddle above the road. Sneakable, but I’ll have to come at them with the sun in my face. 15 minutes of fast hiking later, I come up perfect but looking into the sun it takes just a moment too long to find the gobbler. Miss. Strike 2.

Scene 3: Starting to make my way towards home, and what do I spy in the road but two gobblers duking it out and a big flock of hens milling about watching the action. They scatter, running all over the place. I keep driving, park, and walk to a spot I can glass and see what they do. Let it be known, I’m no turkey calling purist. I love spotting and stalking just about anything, and this was looking like I had a chance. They headed down towards the creek bottom, and the bank was just tall/wide enough that I could probably sneak along it to intercept them. Maybe. Hopefully.

I hustled down the creek bottom, pretty sure the spooky cows, and then spooky deer were going to bust all the turkeys right out of there. I peeked a couple times, and could still see a fan out in the sagebrush flat so I kept going. Eventually, I figured I had to be past them but there was such a sheer drop off to the bank that I didn’t have any play. I had to keep going to a place I could ascend the bank and by the time I found such a place, I was sure I was too far past the flock. But if they wanted to cross the creek, I was now on the most obvious path to do that so there had to be a chance they’d come down it. Right?

I heard a gobble way off to my left. As I feared, I was way past them. I snuck up to the edge of the lip, feeling confident I was going to see that big gobbler fan way out to my left in the sage and much too far away with no way to close the distance. Except instead, I saw a turkey walking on the exact trail I am standing on, about 20 yards out and partially screened by sage. It stopped, and stared. It was backlit and facing me, so I wasn’t positive what I had until it turned and I could see a beard. It putted once, and I didn’t wait. Finally, score one for me. 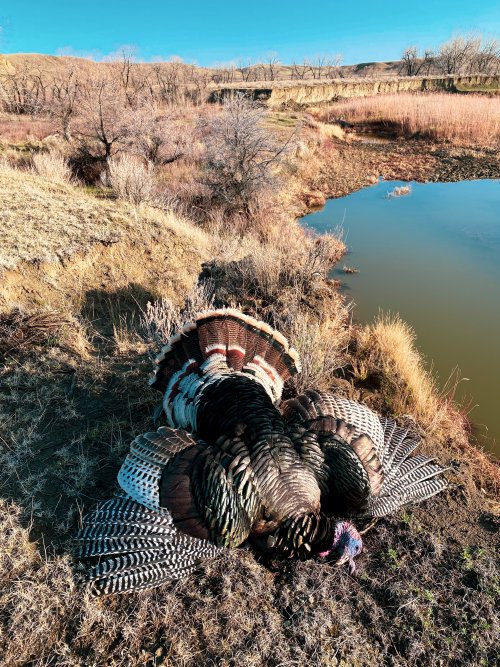 Hunting Husband will be jealous he missed it, but I now feel sufficiently satisfied to sit through an afternoon of webinars.

Congrats! Those are sooo pretty. A great hunt as well. 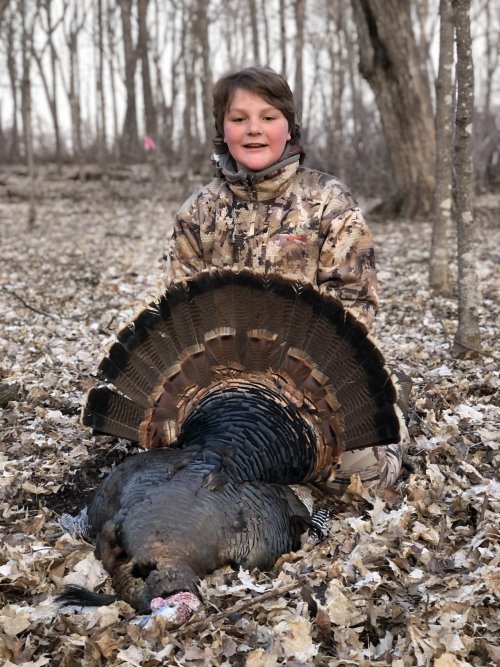 Pretty birds, but I think yours have better coloration.

He looks so peaceful like that. I shall name him Mulbert. 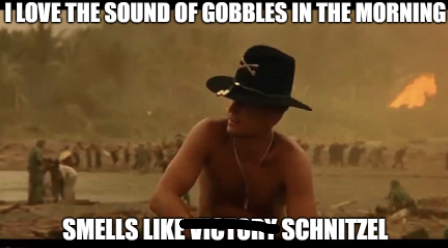 Well done on the gobbler and the thread title!

Very nice! I need to actually figure out how to do that one of these days.
W

Pretty birds, but I think yours have better coloration.
Click to expand...

I agree, our Meriams are quite pretty.
Nice turkey there!

Ben Lamb said:
He looks so peaceful like that. I shall name him Mulbert.
Click to expand...

Before he got peaceful, he almost flopped off the side into the drink. Would have been named Mudbert then.

Not only is sitting and calling mind numbing, but it doesn't feel like hunting to me.

Not only is sitting and calling mind numbing, but it doesn't feel like hunting to me.
Click to expand...

Mudranger1 said:
Now if this isn't one of saddest things I've read on an actual hunting topic of late
Click to expand...

You want to sit in a blind for 8 hours hoping one walks by knock yourself out, I'd rather ride my bike

Not only is sitting and calling mind numbing, but it doesn't feel like hunting to me.
Click to expand...

I agree sitting blindly in a field calling is boring. But chasing a gobble getting close than closing the deal by calling in the last hundred or so yards that sir is what turkey hunting is about! But to each his own.

WildWill said:
I agree sitting blindly in a field calling is boring. But chasing a gobble getting close than closing the deal by calling in the last hundred or so yards that sir is what turkey hunting is about! But to each his own.
Click to expand...

100%, Hunter's ed defines that as "stalking". This is why I like to do, find them, get close call them to range... like elk hunting.

Sitting in a blind is like icefishing with a gun.

Definitely! At first I thought you meant no calling just straight spot and stalk.

When calling works, it’s super exciting. I think this is actually the first one I’ve killed that wasn’t called in. But some days they just aren’t having it. Or they’re pressured and educated. Or they were spooked, like this one. Then I resort to alternate methods

I know what you mean about just sitting though. I have much too short an attention span to sit in a blind for long. Mostly why I haven’t taken up bow hunting…yet.

Your first quote is a lie then....I like you a little again