After a couple OTC CO archery elk hunts in years past, I cashed in a pile of points on a muzzleloader hunt this year to celebrate my 40th birthday. I drew a bull tag and my nephew drew a youth cow tag, and hopes were high that we'd be able to hunt elk during the rut with limited hunting pressure. I drove out from IA on Thursday and overnighted in Denver to start acclimating, then arrived in unit on Friday and drove a few roads, while checking some trailheads from my E-scouting to start figuring out what we might be able to access / hunt and what to cross off the list. Took a short hike Sat morning to scout before I needed to head back down to Denver to pick up my my brother (designated sherpa for this trip) and nephew who had flown in Friday night. Came across a beautiful spot that I thought we might make it back to soon: 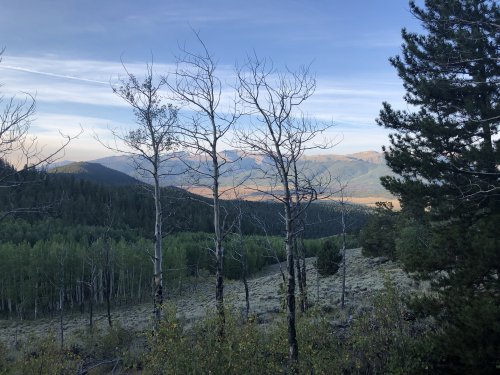 This was my nephew's first western hunting trip so we had rather umm... wisely?... chosen a high-country backpacking elk hunt to break him in right.

Based on E-scouting and what I'd seen so far, we spent the first couple days in the north end of the unit, and found some elk in a high alpine basin at the edge of the wilderness boundary that looked promising on Google Earth. On the afternoon of Day 2, I was hunting solo and glassed a smallish 5x5 with 4-5 cows feeding out above timberline across a canyon, but even from 1.5 miles out I could tell he was not the bull I was after this early in the hunt. Also spotted a separate group of 3-4 cows but never saw a bull with them. 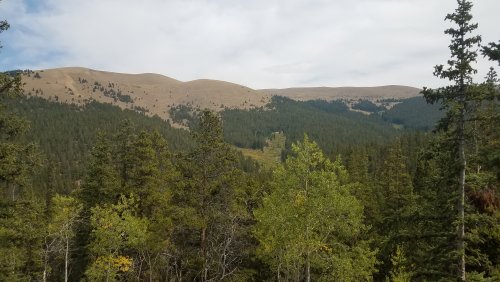 From my glassing perch I did manage to cow-call in a spike to under 10 yds and shot him with the camera. 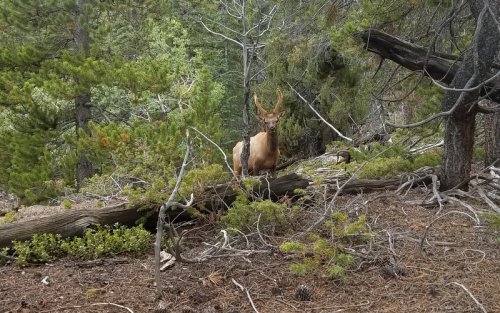 As shadows started growing long in the depths below me, I bugled and a bull responded from my right near the head of the canyon. I answered and he responded again, closer this time but still a ways off and several hundred feet below me in the timber. Light fading fast, couple miles from camp.....dive in or wait until morning? I bugled again and the bull immediately screamed back with a chuckle that made the decision for me--I dropped down into the timber to get on his level. As I navigated the timber we traded a few bugles and the distance closed to less than 200 yards, then he evaporated....the thermals seemed good and I'm not a good enough elk hunter to know exactly what went wrong. But it left me with a character-building, 2.5 mile bushwhack through the timber in pitch black darkness to camp.

The next morning the three of us returned to the area but all was quiet. We ran into a couple local hunters, super nice guys and it turned out to be the area DOW wildlife biologist I had spoken to on the phone while e-scouting, along with his dad, so we felt were in a good area but the bigger bulls weren't there. The biologist had helicopter photos of several monstrous bulls, including a 7x7 that had been using that drainage about a month prior, but neither they nor us found them in there and, knowing an outfitter would be moving into some nearby wall tents the following day, we all moved locations.

I managed to coax my truck up another butt-puckering "road" to a different trailhead, and we hiked a mile or two into an area I had circled on the map and set up a spike camp. Some elk sign but not heavy, we got into a couple more bugling bulls but couldn't close the deal. One night we had two bulls bugling all night between 20 yards and 200 yards from the tent -- that morning I crawled from the tent as silently as I possibly could and within 100 yds of my sleeping bag had a bull bugling in range, but never could see him and with one gloriously well-timed swirl of the wind he shut up / disappeared. 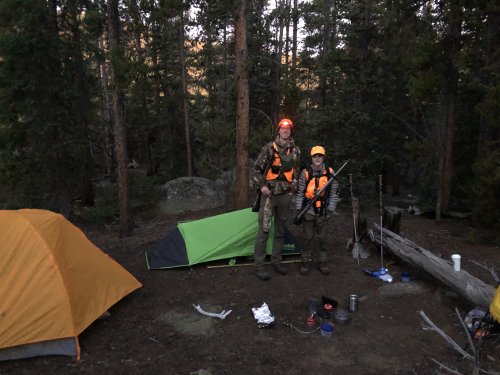 My nephew and I at our first backcountry spike camp -- me demonstrating how to make headlamp batteries last as long as possible. 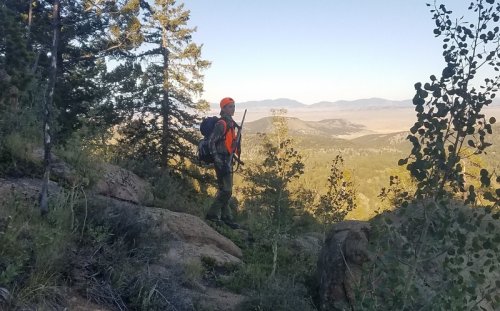 Maybe my favorite photo from the trip -- my nephew was a trooper the whole week, carrying his own weight.

After a couple days in area #2 without much action we made the decision to move again. Along the way we came across a pretty decent antelope buck, cool to see above 10K feet: 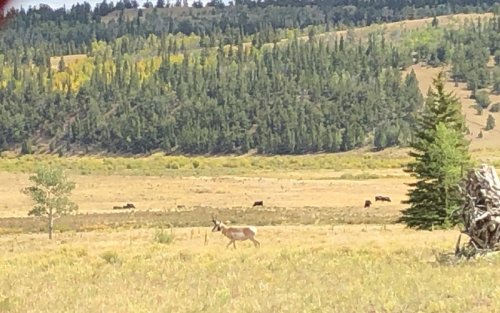 This is now Thursday afternoon, and from the trailhead we worked our way west and then north on an unmarked pack trail into the wilderness area. We pitched our tents at 10.5K' near a spring and some beaver ponds, and waited for downhill thermals to kick in. 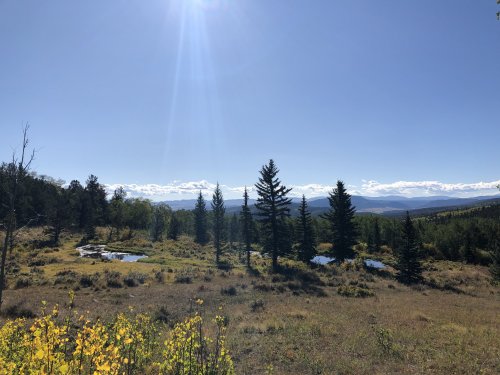 We still-hunted our way up the trail and walked up on a cow and calf moose at 50 yds, which was very cool. Then we set up and did some cow calling but only heard a faint bugle or two. That night we had a bull bugling all night less than 300 yards above our tents. Every 30 mins he'd light off a bugle with a raspy, throaty finish...very little sleep for me. I lay in my sleeping bag and shivered, even though it wasn't that cold. Perfect thermals all night, feeling good. About 30-45 minutes before the earliest gray beginnings of dawn, I heard coyotes roll in on the herd, yipping, yowling, and the elk disappeared. Frustrated, disappointed.

Also had a bull moose by the tent that morning, close enough to smell him and we could hear his antlers rattling the brush and him grunting a bit, but he worked his way off before light came up enough to see him. We started hiking and I was surprised after the coyote fiasco to hear a couple other bulls bugling farther up the mountain.

We reached an area of aspens filthy with elk sign so we set up and cow called a bit. We could still hear some faint bugling, and as my brother was calling I heard a branch snap above and behind us. I crawled a few feet to a small ridge and peeked over to see a decent 5x5 that at that point in the week I was very excited about the possibility of taking -- he looked tasty. He trotted towards us, angling in from my left, but hung up at 60 yds through the aspens not giving a shot. Me with ML cocked trying to find opening for a shot and my brother a few yards below me tossing an occasional cow call downhill....twice the bull whirled to leave and twice I turned him back around with cow calls. The second time he stopped briefly broadside with a small opening between the aspens and some brush close to him....I put the front bead on vitals and let it fly. Honestly I probably rushed it a bit....one clipped limb, no hair, no blood, and no body after lot of searching in the area and I can only hope it was a clean miss. I was disappointed in my shooting after a hard week of hunting. The winds rose to 15-25 w 35 mph swirling gusts that day, temps were going to fall to 20F overnight, and winds were to continue the next day or two. I felt I had put my partners through enough at that point (they were blistered and bruised, and we were about to run out of food) so we made the very difficult call to leave the mountain and spend Saturday fishing the Arkansas River.

Turned out to be a good decision and my nephew did catch some nice trout on his fly rod: 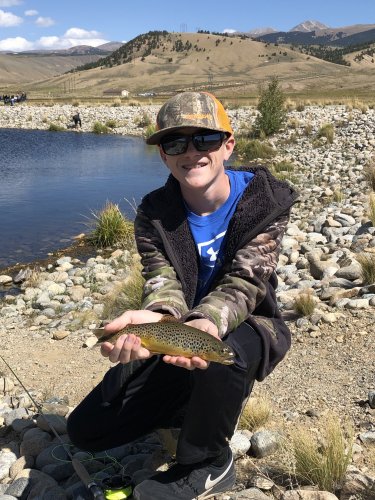 On this hunt we very rarely saw other hunters away from the (relatively) nicely maintained roads down low and mostly had the woods to ourselves. We got to chase bugling bulls without interference from other hunters, had screaming bulls just outside the tent multiple nights, and that was what I had hoped for. In one day we saw a really nice buck antelope, several mule deer, and moose all less than 100 yds, then had elk bugling nearby at night. For the first time, we didn't come home with elk, but we successfully navigated our first backpacking hunt and backcountry experience, I can't wait for the next time I get to shoulder a pack and head out for another hunt.

Thanks for the write up. Hopefully your nephew enjoyed the action enough to keep coming back. Sounds like a great time out there.

Awesome to see that pronghorn
S

Great write up. Sounds like a fun hunt.
You must log in or register to reply here.