Finally got an Elk (Cow)

Well I have never connected on an elk until this year. First year tried for a Bull in Colorado, then last year a late season cow elk here in SD.

I guess I didn't learn my lesson last year and put in for the same season this year.


Let me tell you this year was a bit of a wild ride. I'll skip all the boring days of not seeing anything and just jump right to the good day.


In the morning we came across another tag holder, he had seen a bull and cow/calf combo. This was good news because up until this point we had only seen a solo bull in three days of hunting.

Decide to go to another area of the unit and check out for tracks. That lead to no where, but ended up running into the same guy on the way out. He said he just saw 150 elk that were all on private.

This peaked our interest, let's go take a look at them and figure out if we can make a play on them. We take a guess where we think he may have been looking and pull out the spotter.


Sure enough, there about 3.5 miles away is a decent herd of elk. Can't tell bull vs cow, but with 100+ elk, you know there are some cows in the mix.


Now the hard part, are any of them on public land? We get to looking and I notice some three phase power lines running right through the public, pretty close to the boundary. I can use that, plus Onx, to triangulate where they are to confirm they are indeed just barely on public. About a dozen are the only ones on the public side at this point, but that's good enough for me!

Here is the current scene:

Were (me and my buddy) on the far left at the glassing point, overlooking the green forestry land. The main body of the elk would be north of the bull marker, but the dozen elk are between the bull marker and the cow marker.


Now, how do we get in there? Sure looks easy on Onx, right? I mean look at all those nice trails leading right to the public land?! Ya right, all those cross private land with no trespassing signs.

We do ask the closest house to the south of the trust land if we can walk across his property. He's not the land owner, just a hired cowboy. But he calls the landowner who confirms we'll have to ask another feller who guides on their land (the other neighbor we could have walked through to public). The cowboy was super nice (typical rural South Dakotan) and called the guide, no answer. So he also tries the scheduling gal (total guess, but that seems like what her role was). She lets the cowboy know they don't give anyone permission that isn't guided. But says we can call the guide to confirm.

At this point, we decide not to call the guide. We just get the feeling that if we do, six "guided" hunters are going to pop up on the elk were trying to get after.


So what's left to do? We'll figure out our nearest access point, and figure it out soon because its about 1:30pm and the sun goes down at 4:21pm and its the last day I am going to have a helper (pack mule haha) with me.

We have two options, drive to a small corner that gets us into the forest land, or try for a long driving hoping that some of the roads that cross private land leading up to the forestry land are open to the public. At this point its simple, we can pick only one. Not enough time to drive to test the road and come back to the small corner if they are private.


Now, why wouldn't we just jump at the for sure access point(red truck below)? Well its simple, that point is about 5 miles from the elk, whereas the other option (blue truck below) is more like 2ish mile once we drive in. 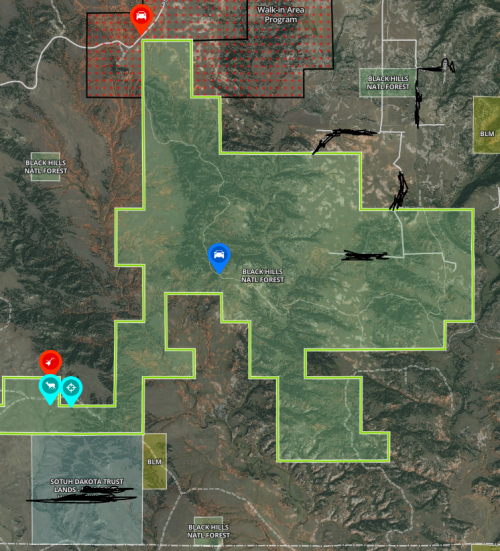 Well we weigh the options and go with the sure thing. We get to the red truck spot at about 2pm. We have two hours, give or take, to hike in 5 miles and shoot a cow elk. How hard could it be?

We drop down to the bare load in my pack, grab the gun and take off.

I won't bore you with details, but basically we took off at a very fast walk. I ended up ahead of my buddy and got to the general area right about 4:15pm. So five miles in two hours. Not bad, but not fun.


I get to a small patch of trees overlooking the prairie, and wouldn't you know it, there is a group of 8 bulls at 175 yards. Are you freaking kidding me? hike all this way in, and the bulls are the ones on public land?!?! I sit there hidden in the trees stewing in rage. I decide to slide down a little further and figure out where the closest cow is and how I can sneak across open prairie with a group a bulls blocking my way.

And wouldn't you know it? Here are three loner cows hanging out past the bulls at 275 yards. A tough further than I'd like to shoot, but it's all I got.


I look them over confirming no small antlers hiding somewhere and try to decide which to shoot. There is a cow/calf pair that is a touch closer, than a solo out at 285yds. I decide she's the one as she's mostly broadside to me.


I get all set up and shoot. I get the whack response back and all the elk just start looking around like they don't know what to do. I can see the cow I shot at stumble a bit, but I can only see her head, the rest is behind the hill. I decide to wait and see what happens. She disappears and the rest of the elk move off 50 yards.

I wait for the pack mule, I mean buddy, to arrive (he took a wrong turn) and we head down the hill. We find our cow in the bottom barely breathing. I put her out, snap a photo and start to skin. 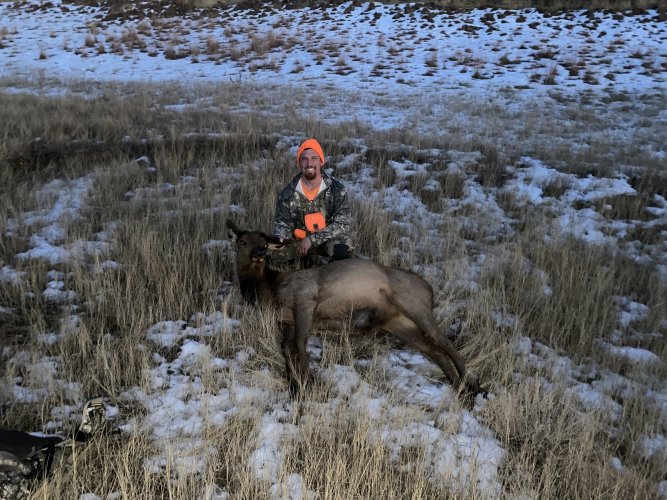 I think there are probably much larger Cows out there, but I am more than happy with finally getting on the board.


Now I break her down and start the hike out. Turns out to be an absolute misery. The weight wasn't terrible, it was the cramping. Both of us were totally cramping up our quads at least every half mile. but after 3.5 hours of packing we finally make it out to the truck, dead on our feet. Not going to lie, there were several points where dropping the meat and coming back tomorrow sounded like the best plan, but a couple mins of stretching out the quads every half hour made it so we could complete.

Made it out in one trip, two guys.

Spent the next day resting in the camper before driving home Christmas day. Got home and started packaging up meat. Ended with 100# of boneless meat off of here. Made a lot into steaks, and fronts/scrap meat for future ground meat.

Couple more photos from the trip: 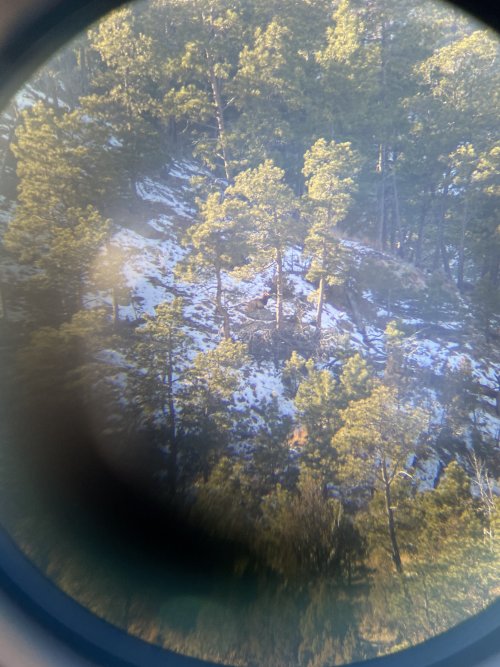 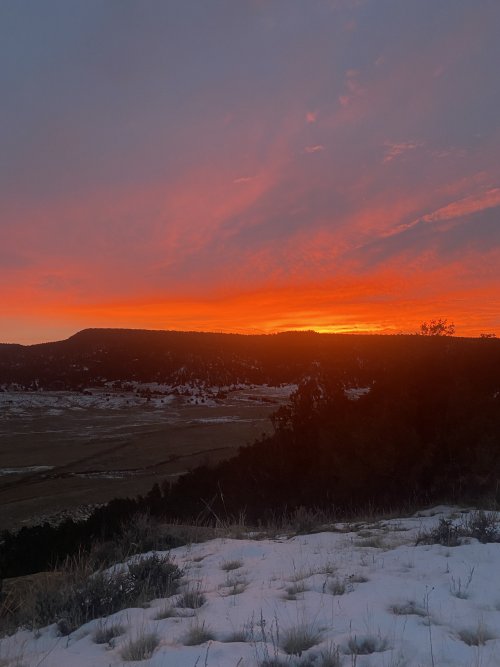 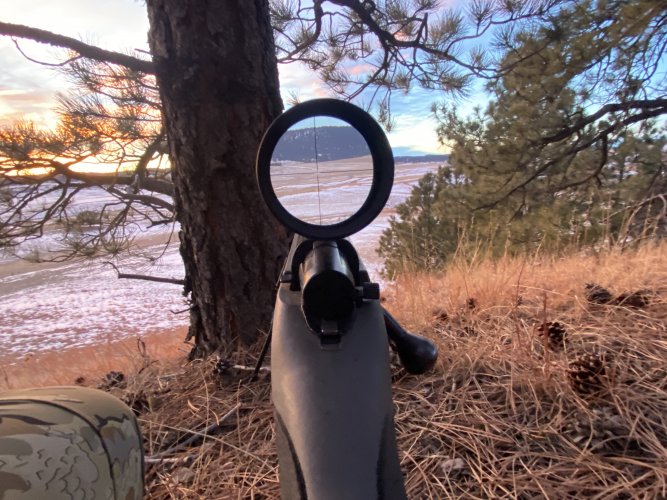 Bulls after I shot and they didn't really know what to do: 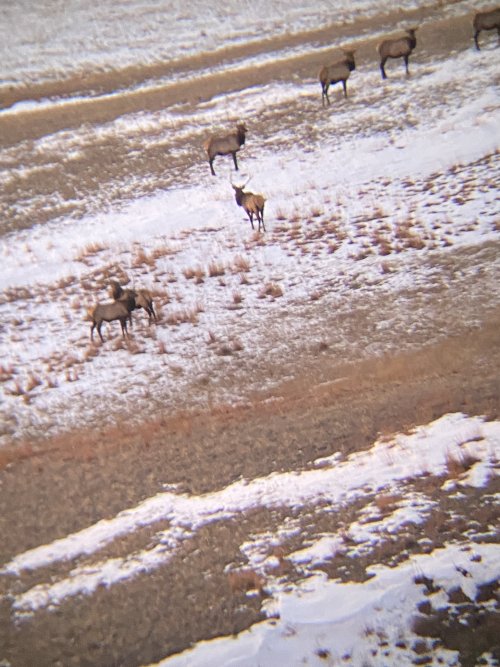 The hike out, plus side of being a prairie state, no huge hills...: 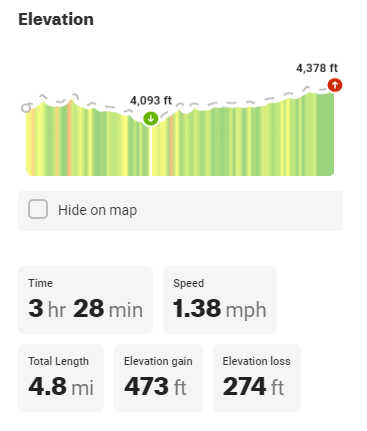 Congrats, thanks for sharing.

How much meat did you carry out?

How much meat did you carry out?
Click to expand...

We were probably split 60#/40# sure did feel heavier on the back, but that's what the scale at home said

Any elk is a trophy, great job!

SD_Prairie_Goat said:
We were probably split 60#/40# sure did feel heavier on the back, but that's what the scale at home said
Click to expand...

Trying to figure out how much this is going to need to be trained for.

I don’t live in the mountains or elevation. Driving truck though, I can get out that way and have been walking at heights over 4000’. I know I struggle over 11,000’ and have to come back to 7000’ to feel better.


Lot different than walking at 950’ or less at home.

Congrats on the success!
K

Congrats on the success! Sounds like a well earned reward!

Way to go!!! First one will always be special!!

Congrats! Looks like all your hard work paid off!

Congrats on a great cow. Elk hunting sure is fun.
U

A younger cow is the best meat there is! Congratulations!
You must log in or register to reply here.