That third evening at dinner we had to decide our next move. Even the owner reluctantly agreed it was probably hopeless pursuing his bull any further. The old bugger knew we were after him. At this point the best we could hope for would be to catch him making a mistake ... and he didn’t seem prone to making mistakes. It was my decision and I opted to try for a fresh bull on the other property. The next morning we arrived at the new farm an hour after sunup. And what a farm it was! Remote operated iron gates, fancy electrified double fences, surveillance cameras every half mile. This was no ordinary sheep/game farm. The owner was also breeding rhinos! He met us at the main road and we followed him to the hunting section ... or rather sections. This place was enormous! Once inside the gate we all piled into his truck. There was good reason why we didn’t proceed in our vehicle. The rhinos knew the owner’s truck, they did not know ours. And he had lots of them. Almost all had their horns trimmed off. Only the breeding bulls kept their horns and they were very closely watched. In broken English the owner explained keeping their horns intact was necessary for the bulls to protect themselves from cows during mating. Rough sex? At least that’s what I think he said. 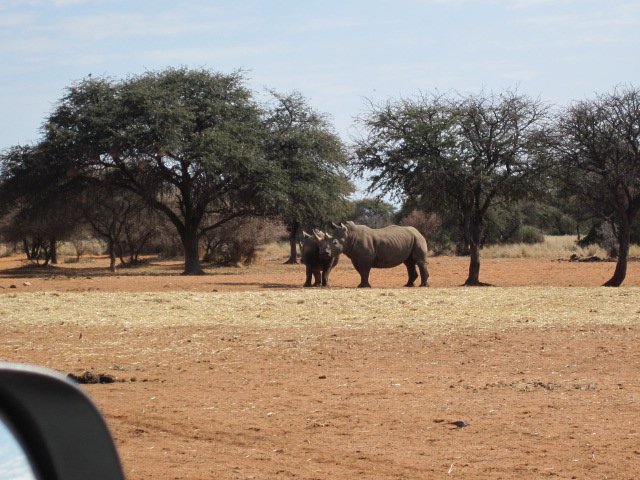 The rhinos were being cultivated to restock areas where poaching has exterminated them. They seemed to be everywhere. The farm also had an abundance of buffalo. However, like the other property, a specific bull was the designated target. Well past prime, it needed to move on to make room for new blood. The owner showed me a photo of the replacement bull. Wowee! Its “drop” (downward drop in curl) was incredible. Hard to believe that bull could run without getting tangled up in its horns. We didn’t see him but did encounter several herds of cows and calves. Finally, after searching for an hour, Glen spotted a pair of buffalo moving through a large opening a quarter mile away. The owner confirmed one bull was the shooter. The other one definitely was not. it had a tag in its ear. He figured they were headed to water and dropped us off as close as possible to an interception point in broken cover. Glen spotted the two heading towards us. I was on the sticks and ready. We could hear them coming ... or rather we thought we could hear them coming. Suddenly a cow and calf rhino broke through the cover in front of us at full gallop. And she was headed in our direction. Glen was about to holler a warning when she caught sight of us and guided her little one away to our left. White rhino are interesting in that the cows push their calves ahead of them. It’s like the little buggers have some kind of mental telepathy with their mothers. Black rhino cows lead their calves. And right behind the rhinos came our two buffalo bulls also galloping in the same direction. They were almost a hundred yards away and it was impossible to pick out a tag on the fly, so no shot. They ran past the water hole into a long, low, wide, brush filled draw that went on for miles. We pursued, dodging rhino everywhere, but the two bulls were gone. As we were making our way back to the track, the owner radioed that he’d spotted them hiding in thick acacia near another track that crossed the draw a mile away. He dropped us off two hundred yards from the bulls and we finished the stalk on foot. Though we knew exactly where the bulls were hiding, it was impossible to see them in that crap. But they could see us! Finally, when we were within fifty yards they broke out. The first bull ran across the track at about sixty yards. “Is that him?” “I don’t know.” Then the second one hit the opening with a tag clearly visible in his right ear. By then the first bull was back in the thick stuff and gone. Too bad we didn’t have the sense to ask the owner which ear had the tag. Now we at least had a good look at both bulls. The shooter was actually much larger bodied than the tagged bull. They both appeared to have very nice horns with heavy bosses. The owner picked us up and we drove to a high spot where we could glass the gully. No sign of the two bulls. He said that’s it, no one pushes up buffalo more than two times. They’re spooked now. May as well give it up. So we headed for the ranch complex ... but hadn't gone far when the top of the truck cab received the familiar three taps from our tracker. He spotted our two bulls laying in the shade of an acacia tree a couple hundred yards from the track. 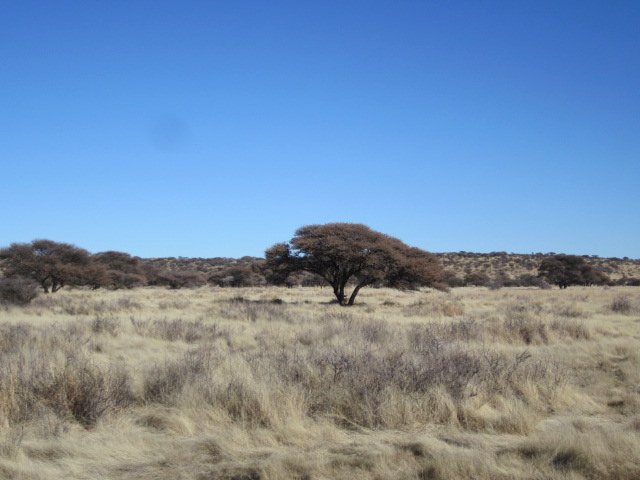 Behind some cover we baled out while the truck was still rolling and the owner drove on. It would not be an easy stalk. For some reason the bulls had doubled back and left the thick cover. We would have to crawl through tall grass part of the way then leapfrog from bush to bush and hopefully get close enough for a shot. Finally, Glen put up the sticks and motioned for me to get on them. “They’re right there in that acacia bush. Sixty yards.” I had the scope cranked down to 3x but I couldn’t see anything. Then a bit of movement in the bush. Then a huge horned face poked through looking right at us. I can’t see a tag but I can’t see that there isn’t one either. I kept the scope on him. He broke right and I got off the sticks keeping him in the scope. He’s clear ... and there’s the tag. The second bull was already out ahead of him and I swung on that one now running at a full gallop. Glen could see what I was doing and said nothing. I floated the .375 just behind its shoulder and fired. Thump! “Well, you hit him, Pat! Where?” I said behind the shoulder because the bull was just turning away. The two bulls immediately separated which was a good sign. Glen told the tracker to keep an eye on the tagged bull while we went after the other one. It didn’t go far, maybe a hundred yards and stopped behind a low bush. Glen glassed it. “I can see blood from his mouth and nose. Great shot!” Our tracker came up to report the other bull was gone and we closed the distance to fifty yards. On the sticks I tried to shoot it in the boiler room through thick brush but that didn’t work. A clear miss, which was a little hard to believe. That 250 gr Barnes Triple Shock must have hit something substantial to deflect that much. The bleeding bull didn’t go far before stopping again, this time facing us. Uh oh! Sticks went up and I shot him in the chest. The bull jumped and spun around half a dozen times before going into a sit position and then toppling over. Two very weak bellows followed and it was all over. 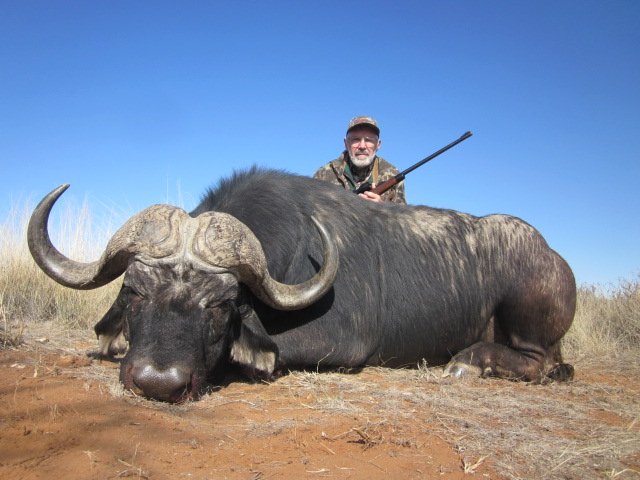 The second shot deflected on impact and exited at the bottom back end of his rib cage, shattering his left hind leg at the knee. The first shot entrance wound was exactly where I called it, just touching the back of the bull’s right shoulder. That one was the killer. Skinners later found the bullet lodged in the opposite ribs underneath the left shoulder. It went through both lungs. The second bullet somehow missed the bull's heart and actually did little damage except break a leg ... which kept him from charging ... if he even had enough gas left to charge. Given the number of times he spun around before going down, I’d say that was a distinct possibility. 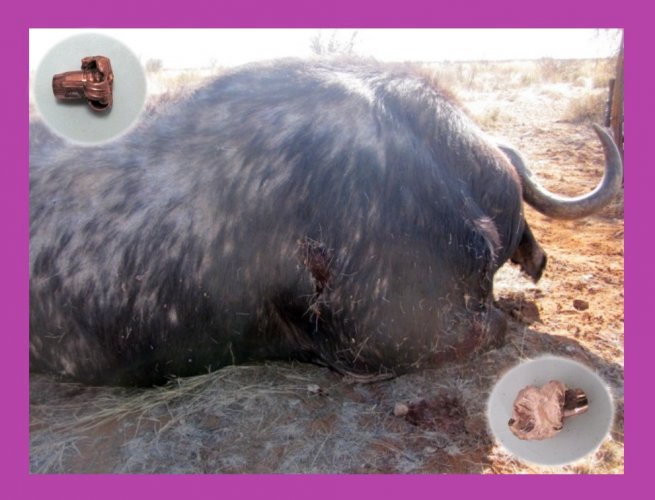 While waiting for the owner to return with a front end loader, we got the big animal posed for a photo and then sort of field dressed. Over there when field dressing, the trackers usually leave everything above diaphragm inside till the animal gets to the farm's processsing shed, Trackers and skinners consider heart and lungs a delicacy ... and the stomach if an animal is brought in whole. Both bullets were recovered. The perfectly mushroomed lung shot bullet lost only two grains after impact. The other bullet lost four grains and was severely deformed, no doubt from colliding with the leg bone after exiting the bull’s chest cavity. The owner told Glen we were welcome to look around for something else to shoot while the bull was being processed for the cooler, but he also told his staff they could take the day off (Sunday) so we had to deal with skinning and quartering the big monster ourselves. 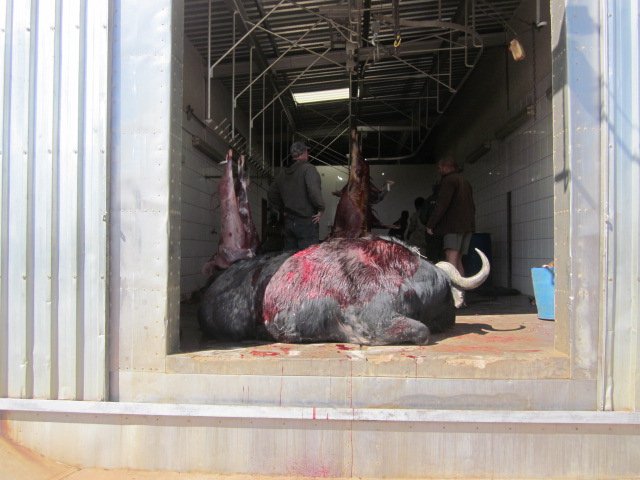 Way too much for our tracker to handle on his own. By the time it was done we had to hit the road for the five hour drive back to the lodge in East Cape. Damn shame too. Got to the main road and a dozen warthogs were watching us from just inside the fence. Three boars had spectacular tusks! Gold medal SCI for sure. Hard to find nice hogs like that down in the drought stricken East Cape. Most old boars have either died or broken off their tusks rooting in parched ground. Oh well.

Later over a beer at the lodge I broached the subject carefully: “Glen, you didn’t say anything so I took that running shot. I know it’s not really allowed with buffalo but I was damn tired of chasing those spooky buggers. They seem to know when I’m on the sticks is the time to run. Three days of that was enough. I want to hunt other things too.” His reply: “Pat, you’re the only client I would let take a running shot at a buff that’s not already been hit.” Not sure if he was blowing smoke up my butt, but I don’t think so. The previous afternoon at the other property when the eland-spooked bull took off, Glen did tell me not to shoot it in the butt. The next day his silence when the bulls busted seemed to indicate he expected me to take a running shot. Glad I didn’t disappoint. I’ve hit two bull elk in the head that were on the move but that perfectly placed shot into a deadly dangerous cape buffalo running full tilt will probably be the one feat that means the most to me. 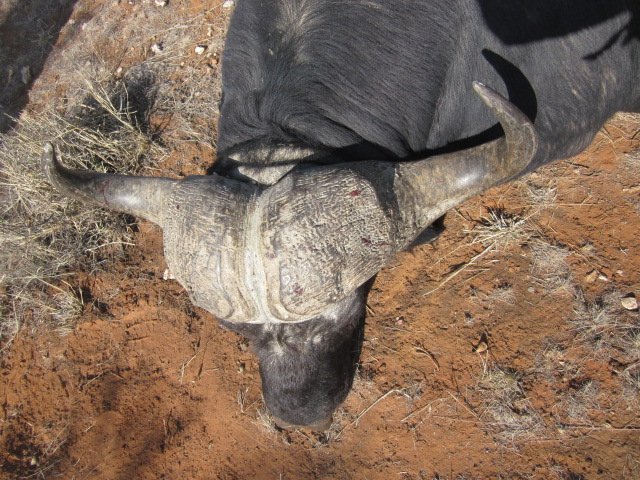 Did you go alone? Next time take your grandson!

Yes, alone this time. Parker is only eight. Hmmm. Maybe just a management hunt. Heck, by the time I can afford to go again, he'll be ten. Project for the coming year is to open the ceiling in the living room for more space to hang trophies.
Last edited: Sep 8, 2021
W

Wow what a story. Those things look mean!