On the last leg home from my African hunting trip. About to catch my final flight. Here's the kudu. My second one. A bit better than the last. They are a lot of fun to hunt. Very wary and rough thick country. Shot this guy in the boiler room at 440 yards with my PH's 270 WSM. He dialed it in seven clicks short and the bullet hit a bit low but bull only went around the bush and laid down. This guy had a huge body, probably a third larger than my last one. About the size of an elk skinned out. Ate some of him last night and it was pretty good. Gotta run and catch my plane. 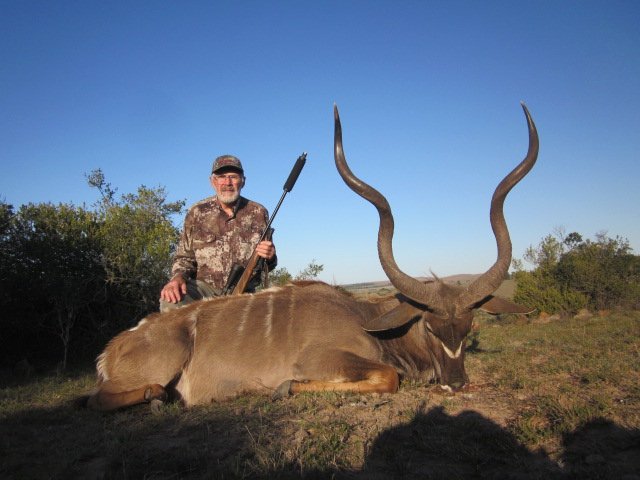 What happened to your old 06? Hope all went reasonably close to plan

We are going the end of April, looking forward to your report.

He's a nice one Pat. Looking forward to hearing more

Happy Myles said:
What happened to your old 06? Hope all went reasonably close to plan
Click to expand...

Still stuck on the tarmac five hours after my flight should have left Toronto. Grrr. I missed the last plane waiting almost two hours for gun to get unloaded by baggage apes from my Frankfurt flight so I could get it through customs and checked in again.

The old Springfield threw a great group with its new barrel the day before I left. Then it went in the crapper when shooting my hartbeest. My fault. It came loose from rushed bedding job. Damn. Rather than mess with fixing it I shot my PH's lovely CZ 270 WSM. And I shot it very well. Black wildebeest at 350 meters in a hard wind ... through the neck right behind the ear. Down he went in a cloud of dust. I'll have plenty of time to get the old Springfield sorted out before going to Montana in October.

Shooting prone off the bipod or offhand worked better for me than the sticks. Seemed every time I got on the sticks the animal took off. Happened so many times with buffalo that after three days of frustration I finally said to hell with the sticks and shot my dagga boy offhand ... on the fly. You don't shoot at moving targets on the sticks. PH said I was the only client he was comfortable with shooting at running buffalo (unless it was wounded, then everyone throws as much lead as they can).
Last edited: Aug 29, 2021

Congrats on what sounds like a great trip. Be safe and God’s Speed getting home sir.

Finally home late last night. I barely stayed awake through church this morning and slept the rest of the day.

Time for the kudu story. While getting another kudu was on the list, it was not top priority. My PH took me to a massive property that only he can hunt with clients. The rancher's son was a school classmate. When I say massive property, I mean horizon to horizon. Much of it is not huntable simply because it's inaccessible. 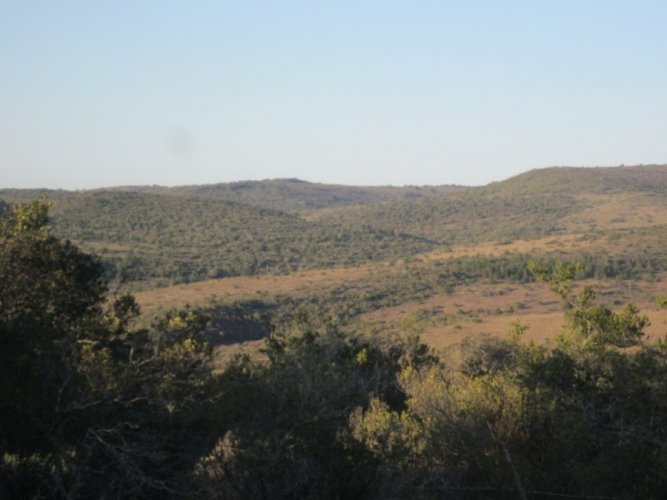 I hunted this place on my last trip, taking four animals before lunch the first day. Waterbuck was on the menu this time ... and a kudu if one showed up. The ranch's steep rocky hills with broken openings in thick brush provide excellent habitat for both species. On arrival we were greeted by a fog rolling over the hills, similar to the Scottish highlands. The ranch manager told us one of the hands saw two waterbuck bulls in a large draw east of the ranch complex. After parking the truck at the head of the valley we worked our way down a ridge. Several warthogs, impala, and a couple of waterbuck cows pushed out around us. Finally, near the bottom our tracker spotted a waterbuck bull peeking through a hole in the brush on the skyline above us. My PH Glen decided it was good enough to shoot and set up the sticks. I scoped the face-on bull with borrowed 30-06 CZ and somehow missed an easy 250 yard shot. Then a kudu bull busted a hundred yards to our left and ran down the valley. Glen moved downhill for a better view to see if he was a keeper. The bull saw him and stopped behind some acacia brush. I could see ivory tips on its horns but had to wait for Glen's okay. By the time he could give it the kudu was off and running again. I had a clear shot as it bounded through a small opening. Unknown to me there was an old fence hidden in the brush on the lower edge and the bull jumped it just as I fired ... right under his belly. In the space of a few seconds I muffed filling both hunting objectives.

Both animals took off east and we pursued them for a while but no luck getting another shot. Went back to the truck and hunted a section south of the ranch complex. Hundreds of animals roamed the hills around us: wildebeest, impala, warthogs, baboons, a jackal (that Glen missed ... twice ... so I didn't feel so bad), eland, hartbeest, kudu cows, a few giraffes, blesbuck, bontebuck, and a couple of waterbuck bulls but nothing shootable. After lunch we returned to the first spot with ranch manager and owner's son glassing from distant hills. Glen spotted the morning's bull waterbuck returning to the same ridge. The other guys watched him bed down in some acacia on a rocky plateau above us and provided directions via radio. The stalk was on! It would not be easy scaling a rock outcrop and getting the drop on him in the thick stuff. 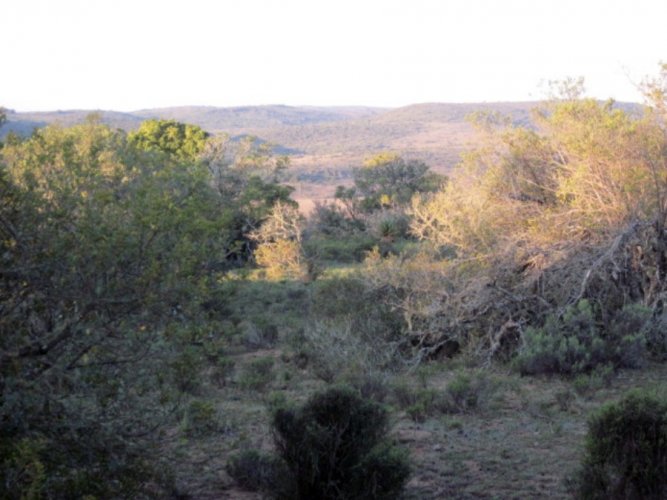 At the base of the outcrop the radio crackled: "Kudu on the opposite ridge!" It didn't surprise me. I had been watching a group of impala bedded over there when they suddenly stood looking up the draw in front of them. Glen spotted the kudu's horns and we quickly moved out of the open and back to that side of the draw. The kudu was watching and stood up for a better look at us. Glen judged him to be very good, the same one I'd shot at earlier. The nervous bull clearly wouldn't let us get any closer so I elected to try a prone shot with Glen's longer shooting 270 WSM using bipod instead of sticks. After I got on the bull with 5x Glen dialed the scope to 20x and 400 metres. "Remember Pat, it has a light trigger." Pop went the supressor ... wait ... wait ... thump! "You got him." The spotters reported the bull only went around the bush and laid down. We gave him fifteen minutes to expire before heading up. Impalas busted us and the bull took off into the thick stuff. We split up with Glen taking the bottom while tracker and I cruised the top. My tracker somehow spotted the kudu standing downhill in heavy cover forty yards away. I finished him with a neck shot. He had come to the same ancient fenceline but didn't have enough gas to jump it. Before shooting I asked the tracker if he was sure that was my kudu (I couldn't see its head). "Yes. Your kudu, sir. SHOOT!" So I did. As we walked up I could finally make out a horn. Turning to the tracker behind me I shouted: "Gawdamit! That's a COW!" 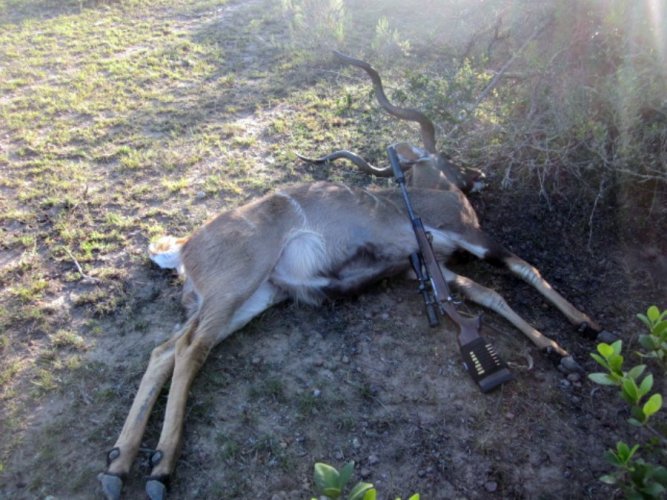 He almost soiled himself. Then I laughed and slapped his back. A rare smile nearly cracked his face. I don't think many clients try to have fun with him. We developed a very warm rapport before I left. He is a hard working little guy with eyes like an eagle. And he genuinely loves the hunt.

First shot hit the bull just behind the shoulder where it should have ... but about ten inches low. No exit and the bullet deflected into guts. That night Glen discovered he had dialed the scope seven clicks short of 400 metres which explained the slightly low hit.

Kudu was finally loaded up as the sun was setting. The ranch manager's truck punctured a sidewall on the way out and I watched as they made repairs in the field. I would have thought that kind of injury would be terminal but they fixed it and drove back to the ranch with the patched tire. Those South African farmers are amazingly resourceful. In the US they make laws to keep farmers from being resourceful. 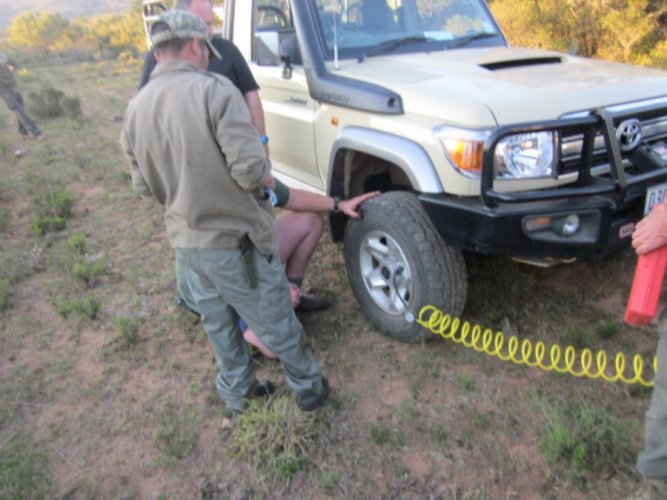 In reference to your post number 6. Did you shoot a Cape Buffalo also ? You mentioned shooting one, I think, and perhaps that story is yet to come. If so, what rifle did you use? Glad you enjoyed your trip and hunt.
Last edited: Aug 31, 2021

In reference to your post number 6. Did you shoot a Cape Buffalo also ? You mentioned shooting one, I think, and perhaps that story is yet to come. If so, what rifle did you use? Glad you enjoyed your trip and hunt.
Click to expand...

Thanks. Yes, I'll try to get to the buffalo story in the next day or two. Still trying to get caught up with overdue chores. For buffalo I used my PH's personal CZ 550 Safari Magnum in .375 H&H, shooting 250 gr Barnes Triple Shock bonded solids. He backed me up with his other CZ Safari in .458 Lott ... which was not needed. When guiding for plains game he uses the .375 as backup.

A sneak preview: "Pat, you're the only client I would feel comfortable letting shoot at a running buffalo that wasn't wounded." I didn't disappoint. (Oops. Sorry for repeating myself ... an elder moment).
Last edited: Sep 1, 2021
You must log in or register to reply here.