Well fellas, I am back at home resting some weary muscles. First I have one thing to say: Who put a 2000' sand dune in the middle of Wyoming. Serious, the mountain I hunted was just that, covered with a few patches of sagebrush and some cedar thickets. Now, on to my story...

Me and my buddy, Don (a great gunsmith)Woke up opening morning and spent the next 4 hours glassing hillsides and the streambeds. No luck, just saw a bunch of lopes being lazy. Caught a glimpse of some elk on the opposite mountain (about 1500-2000 yards) at about 9:30, but then saw a few hunters come out of the same trees and figured that they had chased them off. Not much else happening so we decided to move around the backside of that little range for the afternoon. On th way back I happen to glance up and see about 10 elk busting across the mountain slope about 800 yards off. I thought, hmmm, wonder if that is the same herd I saw this morning.

It had been about 2 hours and 3 miles since I saw the others. Then, I saw some more hunters walking around the mountain. They were talking loud enough that I heard them over the famous Wyoming wind. I decided I would try and cut off that herd by jumping a few ridgelines, but they had other plans.

As I rounded the ridge I wanted to jump them on I saw them going back toward the same mountain that I saw elk on earlier. I then figured that they were going to where I wanted to be. So after lunch we began to head toward that mountain. It was after 3 by the time we approached the first peak in a line of about 7. These were little rock tops spread out every 50 - 100 yards. As we approached the first one we jumped a cow and calf. They just kinda fast trotted out of the area, but didn't make much of a fuss. We continued up to the top and began to glass. What I found just amazed me. There were more cedar thickets and holes that I thought could be in such a small area. We could not see any of them from across the valley. Immediately upon looking around the area we saw 1 spike and 2 cows. I have already killed a spike, so I was holding out. We then decided to try and work our way along the peaks, stopping at each one to glass.

It is more tiring trying to avoid all of the elk eyes than actually hiking up the mountain. Each time we stopped we saw more and more elk. In all, we saw 7 cows w/calves, 2 spikes, 1 large bull waaaaaaaaayy off (decided not to go after him), a few raghorns, and the one I ended up taking. To the good part...

I saw a little raghorn 4 point that was just feeding around at about 100 yards and decided to take him. I was perched on some rocks without a real stable shooting position due to the angle. Just as I was about to pull the trigger on him, Don says "Wait, there is another bull. He is bigger, take him quck." THis bull was trying to head around another little ridge and I didn't want to lose him. I whipped my rifle around, and just as I was squeezing one off, my left foot slipped on the rocks. I ended up hitting him in the right hip. I quickly chambered another round and put one through his upper chest, angling down to exit in fron of his left shoulder. (was kinda looking down on him). Just as I drew cross hairs on him again to finish the job before he got out of sight, a spike moves between us and blocks my shot. We wait a few minutes and begin to track. Sand makes tracking very difficult. THe blood just disappears in it.

We saw the bull laying under som cedars at about 100 yards so I look at him through my scope. HE WS STILL ALIVE!

I put another one through his lungs and he stande up and begins to thrash at the bushes around him and going nuts. I thought I might have messed with the wrong bull. I then put another one through his lungs and he lays back down and looks around. I decide to just wait for the inevitable. A few minuted later we approch him VERY CAUTIOUSLY. He was finally dead. I began to look him over and sure enough, he ended up with 3 bullets through the lungs. THe last 2 were within 3" on entrance and 8" exit. It then took us a day and a half to get him off the mountain.

Wasn't the biggest 6 point, but it is my biggest. This is surely a hunt that I will remember forever. I will get pictures posted soon, my scanner is down.

Glad to hear you had a successful hunt, Tim. Looking forward to your pictures.

Nice going on the bull Tim

, and good story...Did your partner get his elk??

Way to go on the bull and it sounds like an awesome hunt having to contend with all those other pesky elk getting in your way. Wish I could have trouble like that.

My buddy didn't draw that area for elk, he did get his antelope there however. A nice little buck, 13" up, 8" bases

One other thing: I am not impressed with the Barnes X bullet. That is what I was using in 180 grain. When I inspected the carcass to see bullet path the entrance hole and exit hole was the same size

THere was very little shock damage going through. I am guessing that the high velocity of a close range shot didn't allow for expansion. Any bullet suggestions for me?

try the Nosler partion bullet in 180 grain.
I use this for my 30-06 and at 40 yds it expanded nicely to drop my bull last Nov.
About 5-6" hole coming out the opposite rib cage.

Also,it worked great on my muley in Oct.
M

Forgot to mention.
Nice story, could almost imagine I was there!
W

Great story! Congrats on the bull.

Way to stay with it Tim. Congrats on a nice Bull.
I

Congratulations and thanks for the story.
E

Congrats on the bull and a good story. Now hurry up with the pics.

Congrats on the bull Tim,great story.
B

Tim, congrats on the bull.

Now to answer your question...

But despite that I'd shy away from the barnes X bullets, your story sounds very similar to the only reliable information I've gotten from people who have actually shot game with them. I think they're just another gimmick, and I'd never use them. I work too hard to find game animals I want only to have it messed up by poor bullet performance.

I've used noslers and killed all my elk/antelope/deer with them. They have performed flawlessly. ALWAYS open up nice and ALWAYS retain 60ish percent of their weight (on the very few I've recovered) and almost always exit.

Check out this rock that the bull I shot Friday ran by about 10 yards from where I hit him...he was laying about 10 yards past the rock. Perfect shot through the lungs, busted a single rib on the exit side, about a tennis ball sized exit hole. This is typcial performance from the 250 grain Nosler Partition from the 338. 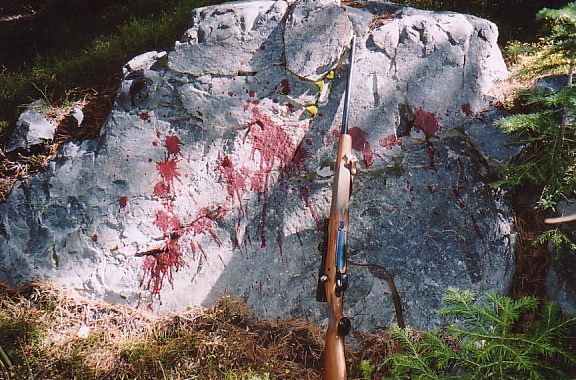 Also, if you're shooting one of the 30 mags, I'd highly recommend the 200 grain Partitions, I've seen them in action, with smashing results.

To go one step further I would move up to the 338ish line of calibers if I was planning on doing lots more elk hunting down the road.

All the sub-30 calibers are iffy for elk at best for all kinds of reasons. I wont get into any of that, but I've killed enough and seen enough elk killed, to know that its pure bullshit for anyone to argue that the smaller calibers "work just as good"...because they dont, and thats a fact.

Congrats on the bull

Congrats on your Bull! Were you lucky enough to be one of the few to draw unit 100 for elk? From your mention of sand dunes and cedars im assuming you drew this hunt?? I live righ there in Rock Springs and watch those big bulls all summer. Congrats!
W

First off, my scanner is broken and I am trying to find a replacement, or some other wat of getting them on the computer.

Second: I am using a 300 WinMag. Never had this problem using the Winchester Power Point (original, not PP+). Those were all one shot kills. I am definately swapping to a new bullett.

Third: My hunt was unit 111. Pathfinder area. I was hunting on Bear Mtn/Muddy Mtn. I have heard that the herd there is similar in behavior to the desert herd.

Thanks for the replies, and the pics will be up soon, I promise.
You must log in or register to reply here.

Tuesday at 11:00 AM
StrongmanHuntsBigGame
S