Curious what kind of exits and blood trails you guys are getting with the Etips at 7mm-08 velocities?
D

On which shot?
F

Broadside behind the shoulder shots. Or for that matter any of them. They shoot really well in my rifle but I have never shot any game with a mono bullet.

I’d assume about a quarter to half dollar size exit hole. Blood trail would depend on where you hit them

I don't usually have huge blood trails with rifle shots. There have been a few times I brew up something's heart and had blood gush out while they ran about 40yds.

My wife's buck from last season was heart shot w a 7-08 at 250+ yds. Ray Charles could have followed the blood trail. Exit hole the size of a quarter 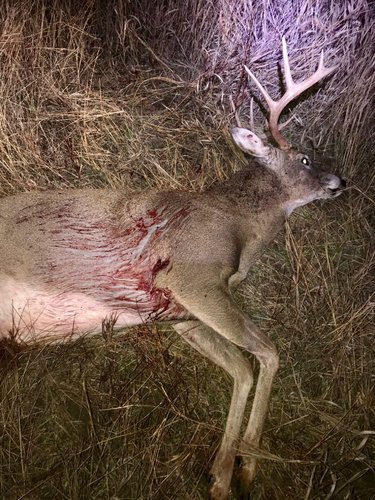 I shot barnes tsx bullets from my 7mm Rem Mag on a plains game safari in South Africa. It was the first time I had used all copper bullets on game. As other guys have noted, I observed smaller exit wounds than with standard lead core bullets, maybe the size of a quarter. Also less bloodshot area/damage when the game was skinned. Blood trails depended on shot placement. Penetration was amazing. When shooting large animals with a smaller caliber, the copper bullets really improved performance. I had complete pass thrus on kudu, gemsbok, and hartebeest, often breaking shoulder bones on the way thru. On the smaller antelope, I was less impressed, pencil hole sized entrance and exits. I'm sure the bullet was expanding, but it did not look like much. With lead core bullets I had always experienced "bang, flop" on deer sized game. My grey duiker took a double lung hit, ran maybe 100 yds, and the tracker had to dispatch him with his knife when he found him.

Firemedic92 said:
Broadside behind the shoulder shots.
Click to expand...

I've never made that shot and had to worry about a blood trail...

Coreloks - couldn't get them to group, period (9 inch groups at 50 yards)
Barnes Match - exploded, worked ok in broad side shots, but not a good hunting bullet
Partitions- They did fine, used them on 1 elk, 1 pronghorn, and 2 deer. They came apart in the animal, only the shot on the pronghorn and elk had pass-throughs
Swift A-frames - Phenomenal bullet, clean pass throughs on broadside shots, decent sized exit hole
Etips - Only used them once so far, on a bear, seemed to be similar performance to the Swift A-frames

Personally I don't like bullets that don't pass through on a broadside shot, as to me that suggests they wont make it far enough on a high shoulder shot or pass through the hind quarter on a poorly placed quartering away shot. I don't recover the vast majority of my bullets for this reason.

Hoping to have more samples this fall.

Shot a sow lastnight at 100 yards, behind the ear, bang flop.

Glad I click into this post bc my son shoots a 7mm08 and I am going to get a couple boxes of diff ammo that was suggested on here to see how he shoots and see if there is any difference in patterns.
N

I've never used Etips, but have used Barnes Vortx ammo and Federal Trophy Copper pretty much exclusively. I've never needed a blood trail for any recovery as animals have never gone far. The all copper bullets are very good at complete pass throughs which is really the only way to get a good blood trail IMO. My only 7mm08 experience was last year on an antelope with 120 grain barnes. Dropped like a stone and didn't budge.
You must log in or register to reply here.
Share:
Facebook Twitter Reddit Pinterest Tumblr WhatsApp Email Link
Top