This is the hardest I have ever had to work for a bull. Three of us packed in 7 miles on horseback for a 6 day hunt. After three days and no elk heard or seen (just wolves) we decided to pack out and try another location. We went to another unit that I had only e-scouted and never stepped foot in. We rode many miles and glassed tons of country for another three days. We only saw one glimpse of an elk going over a ridge. I thought I saw an antler but wouldn't stake my ex-wife on it. Okay maybe. lol We had been dealing with hot, dry weather, and a full moon. We decided to bale from that spot and try a different unit after the weather was supposed to change that weekend. We stayed at my friend's cabin that really isn't horse friendly, so we decided to leave them home. Bad idea. We left Saturday morning since we were still recovering from out last 6 day adventure. Again this was an area I have never hunted, but another friend pointed me to a gated area that he had seen/heard elk the previous week while spike hunting. We parked the 4wheelers and took off in the dark. About a mile into the walk it started snowing. Both sides of the logging road were steep and thick. I knew if an opportunity was going to happen it was going to be fast. I was caring my rifle like a shotgun ready for a bull to "flush". As I rounded a corner there was a cow standing in the road that had just come down the hill at 40 yards. I immediately mounted the rifle while I flipped the scope caps up. As soon as I had her in my scope I could see the bull's head behind her. She saw me and and dove off the edge of the road giving me a clear shot at the bull. The 160 grain Nosler Accubond out of my Remington 700 SS 7 mag hit perfect and he only ran about 30 yards. Thankfully he stayed on the road! I was early and my buddy still had a tag. I told him we should tag and gut my bull and keep hunting for his. We walked another 9 miles cut some fresh tracks, but never saw another elk. When we got back to my bull we decided to just bone it out and take him out in one trip. We had about a mile of road, then about 1,000 yards straight up the hill to the 4 wheeler. I had the hind quarter in my backpack, and carried the neck meat, front shoulder, tenderloin, and backstrap gunnysack style. My buddy had the same. About 1/2 way through the pack I was really wishing I hadn't left the ponies at home. When we got back to the 4wheeler we had been out for 8 hr and 46 min. Walked 11.2 miles and gained and lost 2,600' of elevation. We were both wiped out. He's not my biggest or smallest bull, but defiantly the most hard earned. In an OTC unit with only 6% success I feel very grateful for the whole experience and the final outcome. Hard work and persistence 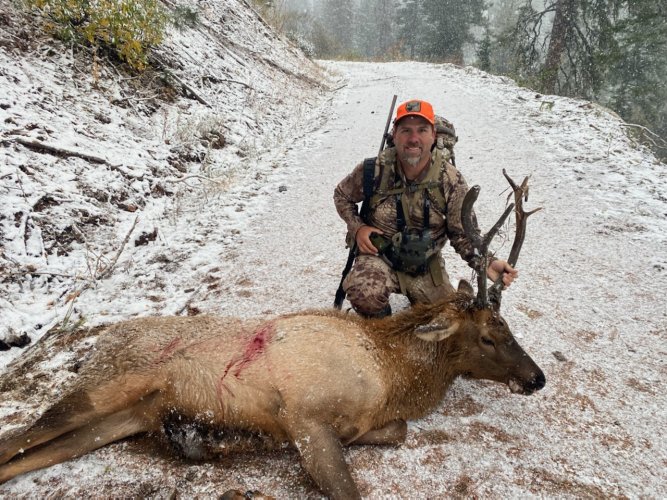 Love it when they die on a road. Even if you can't drive to them, it makes it nice for butchering. Congrats!

Congrats
You must log in or register to reply here.