After a lifetime of applications We finally Drew Moose Tags in our home state of Washington. Complete chaos followed finding out that We had drawn coveted Moose tags. We were both out of control. Google maps, on the phone every night, PM's to Moose savvy hunters, reading, watching videos, Moose, Moose, and more Moose.
The conversations always ended up talking about Moose.
It is funny when someone draws THE TAG. You see a friend and say "hay did You here that so and so drew (?) tag". "Oh Yah, I herd that". Well last year We were the "so and so".
With Washington's draw results coming out in June we only had until October 1st to start the hunt. Neither of us had ever hunted Moose and neither of us had ever hunted the Moose unit. We had our work cut out for us.
We arrived and set up camp three days before the hunt started. Scouted each day and saw four Shooter Bulls.
Opening day came and so did other Moose hunters. It seemed they had all seen the same bulls as we had. Us two tag holders split up and went in different directions. Mark and I went to the North and Butch (the tag holder), Glenn and Kevin (Butches boys) went to the South.
It was very warm and We had not seen anything opening day. About 11:00 am We had stopped to glass and heard some brush breaking below us and a faint grunting of a Bull Moose. The wind was very bad. We drove around to the west side of the commotion to get good wind and while driving, Mark spotted a cow and a calf. We parked and worked our way down the draw. Mark stayed back a couple of hundred yards and called while I worked my way down the hill. I stopped and raked a tree with a limb and within seconds a Bull with one horn came running into the noise. He was pissed, fire eyed, snot running out of his noise and posturing like He was about to kick some but. He was about 15 yards from me and He looked very big (Probably 36" to 40" if He still had two horns). I passed the shot and shooed Him away. Mark continued calling behind me and seconds later a smaller Moose appeared (maybe 30").We walked back to the truck drove away and talked about all of the excitement we had just had. All of a sudden We remembered We had herd a Moose answer from behind Mark when We had set up before. Mark was driving, he turned the truck around and headed back to set up again. It was 1:30 pm and we had just had some action so we thought we should try again. Most people say "give it up at 11:00am no need to call they will not come to the calling" We thought what the heck lets give it a try. As we rounded the same corner we had set up at a Moose stepped out into the road. I looked at it and was deciding if I should shoot, Mark affirmed with Shoot, Shoot, it is a Shooter. I asked if He was sure and He said Shoot. Mark had hunted the previous year in BC for Moose and had a lot better idea of a shooter than Me. I shot. The Moose went about 100 yards down the road and crumpled in the ROAD. As I walked up to Him He got bigger and bigger. No ground shrinkage at all.
We called Butch to let Him know We had scored, took pictures for a few minutes, Mark set His camera on a tripod to take a picture every minute or so and we got to work deboning and breaking Him down. Within the hour Butch, Glenn and Kevin were with us celebrating the harvest. What a great bunch of Men. We are all very particular about meat care and kept the meat butcher shop clean. Once we got back to camp We hung it in the enclosed trailer and the temperature dropped down to the high 20's that night. Wow, how perfect.
I will try to get butch to add to this post with His story and pictures of His Awesome Bull,
Now I will try to post pictures, (technically challenged). (No luck will try tomorrow)
Thank You for reading,
John
B 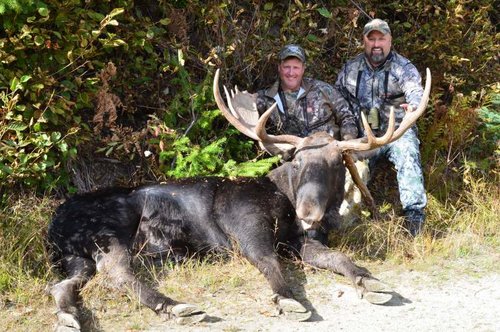 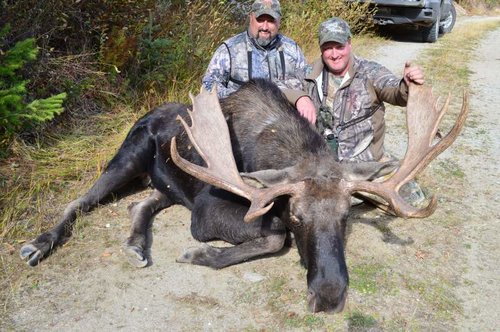 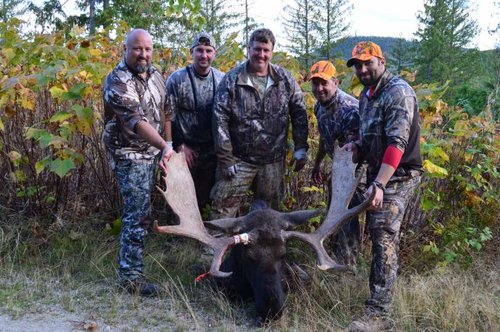 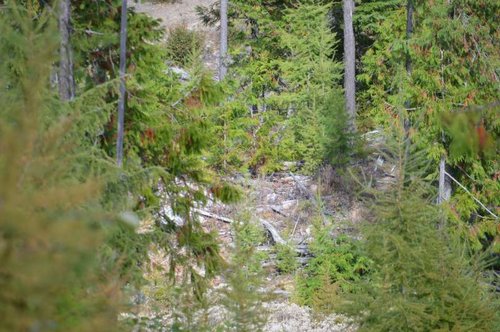 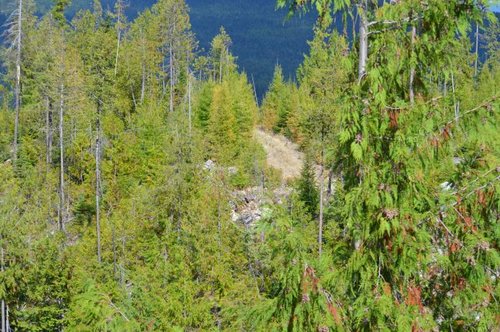 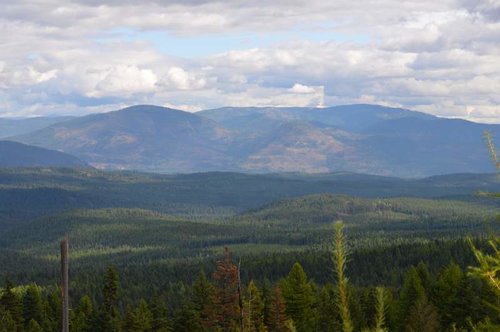 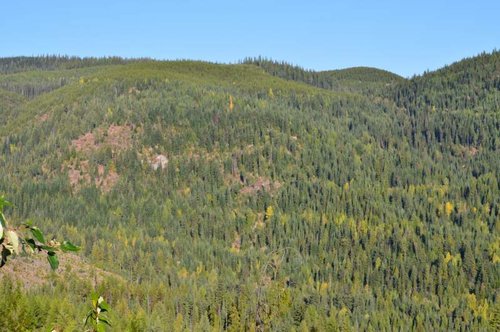 Getting a moose tag, finding a big moose, and connecting successfully are all highly unlikely. But then he dies in the road!

Thanks for sharing and Congrats!
B

Great moose! On my short list of hunts to do.
B

Thank You all. It was a dream hunt for us.
John
2

Congrats on another tag John, can't wait to see how you guys do. Later
B

Congrats on another tag John, can't wait to see how you guys do. Later
Click to expand...

Yah, We are a couple of ugly bas***ds but that keeps us safe at camp. Sort of!
I heard You caught some fish too.
See You soon,
John

Looks like a great hunt, can't beat it dying in the road either!
2

Damn auto correct, re read the message, I don't even know what it says! Ya we caught fish, never have gotten shunned with Mark. Love this time of the year, hopefully I get a oil tag. Later
B

257 Wby Mag said:
Damn auto correct, re read the message, I don't even know what it says! Ya we caught fish, never have gotten shunned with Mark. Love this time of the year, hopefully I get a oil tag. Later
Click to expand...

Good Luck Judd! I hope You draw a good one.
John
B

Thank You Randy,
John
B

Getting a moose tag, finding a big moose, and connecting successfully are all highly unlikely. But then he dies in the road!

Thank You Nameless. I do feel very fortunate to all the above.
John
You must log in or register to reply here.

Wednesday at 7:44 AM
Dust Rider