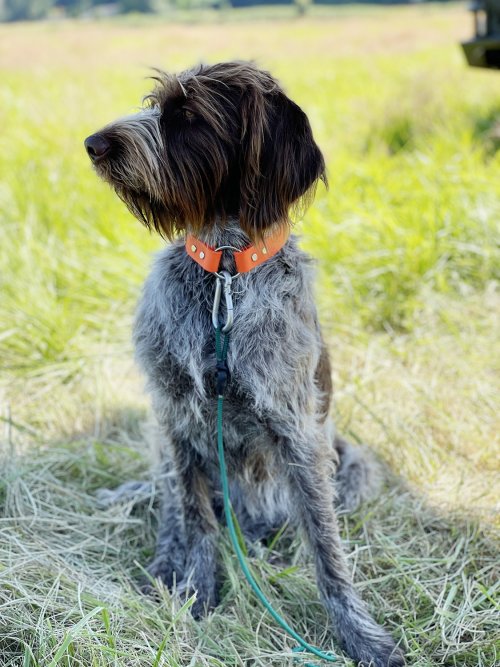 Last Friday was the date for Ruby's NAVHDA Natural Ability test. While I knew she had potential to be able to accomplish the tasks needed, expectations were not super high due to the fact that I was only able to make the 6 hour drive round trip twice to get her to organized training days. I did set up three other sessions with a trainer closer to home, as I didn't have a way to work on gun intros or get her in front of live birds after April. For the most part, her training was going out for hikes among wild pheasant, quail, and huns over the winter/spring. I think she learned a ton just chasing those birds around and something started to click on the last session with pigeons in launchers a few weeks ago.

Fast forward to last weekend, and it took everything to not telegraph my nervousness to Ruby as we headed out for the field portion of the test with the judges. As she usually does, she started off slow and deliberate, but she followed our lead as we switched directions to test her cooperation. We passed by the first planted chukar undetected, even after circling back around to get her downwind. Other than stopping to look back at me for a moment, she did not react to two shots from a 20 gauge behind me, happy to see that her work with a starter pistol had paid off. As we pushed up the field, Ruby ducked into some tall grass under a tree and obviously caught some scent. A few steps further and she stopped hard into a beautiful point. I asked the judge, "Is there a bird there?" (She often points butterflies, leaves and other things) She responded "Let's go find out." Much to my surprise, Ruby held completely steady on that point with no input from me, allowing me to walk the 20 yards to her side, and then in front to give the chukar a nudge with my toe. She got to chase the bird for a bit and then we moved on. Even if nothing else went as planned, that one point/hold made my day. She ended up pointing two more birds in the 20 minute walk. Number two was a sight point. The judge further back saw the bird before she did, he said he was impressed with her restraint, as she held steady as the bird was moving around a lot. I almost got my hand on her collar when it ran and she gave chase. The final bird was out in the middle of the field, and her point was rock solid. The judge laughed, because for some reason when we got to the chukar it was laying in the grass on its back, feet up in the air. Ruby almost got ahold of it, but we grabbed it in time. I was absolutely elated after that 20 minute hunt. She just put it all together like she's been doing this for years.

After some time in the shade, we moved on to the tracking portion of the test. I've only done limited work with tracking, mostly dragging a pheasant skin around the yard and hiding it in the bushes a handful of times. I was told to not overdo it with tracking, it can affect their desire to point. She never practiced with a live bird. When I first released her at the feather pile, she ran straight out, nose down. Eventually she came back towards me, almost all the way back to the feather pile. She ended up leaving the track, searching for scent. She found a different track from a previous bird, and spent a bunch of time investigating that. I had no idea how she did or how they would score her. She did track the bird, but kind of got distracted at the end. I assumed she would at least get some points for her initial effort.

Again back to the shade for a bit and then on to the final test, water entry and swimming. Ruby absolutely loves the water, it's harder to keep her out of it than to get her to go in. As expected, she charged in with gusto, swam out and brought the bumpers back to me. There was a volunteer there taking photos and he captured an amazing shot of ruby charging in. 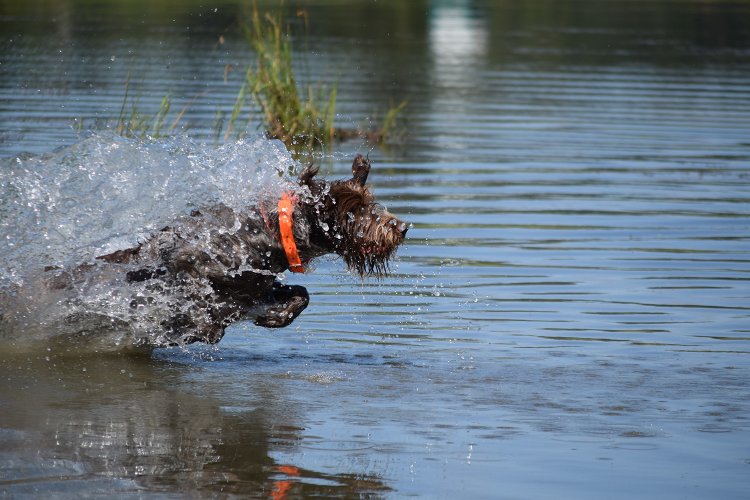 When all was said and done, I had hopes that Ruby might get a Prize 2. I figured her tracking score would keep her out of the running for a Prize 1. When they announced Ruby's scores, my jaw about hit the ground, she received perfect scores in everything, except for a 3 out of 4 for tracking. Little Ruby Dooby Doo earned herself a score 110 Prize 1.

Holy moly, I am proud of this doggo.

Right on! It sounds like you did just the right amount of training. How great a feeling to get a better score than expected.

I've been training two pups, a French Brit (9 months) and a Drahthaar (7 months). The Brit pup has her NA test mid-August. The Draht is in the German system so it won't be until spring for his first test. It's interesting watching how differently they have progressed, they are just extremely different dogs. Each has their own niche but if I had to choose just one I'd definitely keep the German dog, he is a tracking, pointing, swimming machine. I think they fit my personality better. Thankfully I don't have to choose though!
You must log in or register to reply here.

O
The Adoption Is Final!
2