After not drawing Colorado I decided last minute to put in for Idaho.
I was pretty lucky in getting a late season tag for the southern part of the state.

I had planned to spend 10 days in the middle of the season, but when season rolled around I had a unforeseen family medical stuff come up and my trip was going to be 2 quick days or nothing.

I had scouted a few days in August and saw pretty much nothing, but everyone said it’s a weather dependent hunt and the deer will be there when the snow starts pile up.

Well the snow never came. It was low 60-mid 50s almost every day.

The first day I saw two deer so I moved. The second day produced way more deer but Only little bucks.
At the end of the second day I glassed this deer up at around 500 yards from my truck. With my situation being what it was I knew he was a shooter.

He was just standing in the brush with some does. I Patiently got my stuff ready, with the plan to move 200 yard closer and shoot off a point.

Soon as I started getting ready he took off straight away on a full run, leaving his does behind.

He was gone and I was really bummed. He was The best deer I had seen by far.

After getting home and tending to things I started trying to figure out how I could go back.

I was able to carve out another three days, so I made the 8 hour drive back.

I glassed this deer up at 800 yards the second evening in almost the exact same spot I had seen him over a week ago. Once again I moved around to shoot from the point, when I got there him and the does were completely gone.

I camped near by so I could hopefully turn him up on my last morning.

Morning only produced some does and one 14 inch 3pt.
I decided to drive about 45 minutes to the next area that had a decent amount of deer.

Before I got there I glassed him up again. This time he was on the move and didn’t seem to have a care I was there.

Set up on him and squeezed the trigger, hunt went click, all kinds of things flashed in my head for a millisecond.
Had I forgot to put a bullet in?
Had my firing pin given out?
Opened the bolt and out popped and full round.
But the second round worked like a charm and my hunt was over.

One kinda kicker to the whole hunt,
I was pretty fortunate to beat the odds to get this tag, but forked horn tags are otc in this unit.
This would have Been a super nice deer on a otc forky tag. 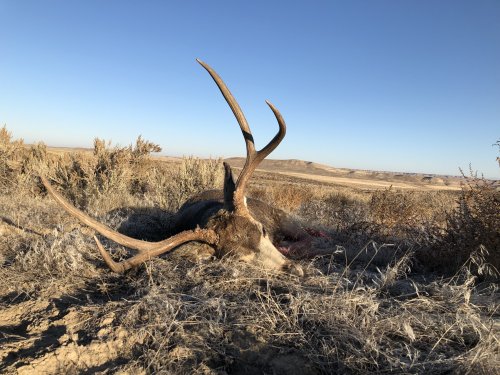 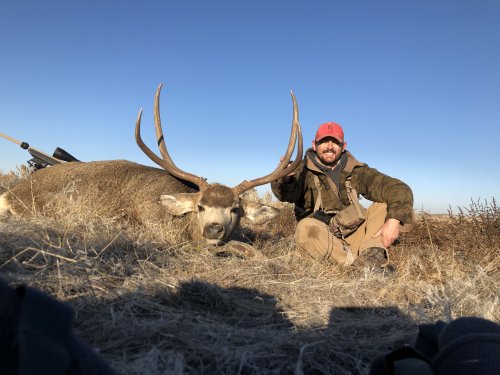 One of the biggest forkey I’ve ever seen. Congrats!

congrats on a nice buck!!
H

2x2=WOW That's one heck of a buck, congrats!

Duckslayer to the courtesy phone. I know you need to see this. Nice buck, and congrats on finding him again.

Cool buck! Would be a no brainer for me.

Gotta love a big forky like that. Congratulations!
S

Have to be a record forkie!! Congrats

Holy deuce! That is awesome.

Really really really tough year to have that tag. November was 1/3 normal recorded precip. Not a late tag in the state I’d have wanted in 19’.

There are some huge 2 points in those units, congratulations on a really cool buck!
N

That would have been awesone on a forked horn only license.