It's been a couple of years coming. My son loves the outdoors and loves going on hunts. However, he hasn't been able to claim his first big game animal, let alone his first deer. This year, he has had a whitetail doe tag in WY and a buck tag here in the Kamas unit of UT. We went up to WY in September and got on numerous deer, but my son unfortunately missed a couple shots. He's always been a pretty good shot, but was really struggling with controlling his adrenaline. Over the last month we worked on shooting by practicing making a routine, breathing, dry firing, and actual shooting.

We weren't able to head out for the early rifle season until Wednesday evening because of work constraints that I had. We worked hard for 3 days, but were only able to get onto does and fawns. Numerous times when we found does, I would have him practice his shooting and breathing routines and practice taking the shot as if it were a buck.

On the third morning, we found a group of 4 deer. At first glance, it appeared to be a couple does and a couple fawns. However, when one of them turned it's head I said "that's a buck!" It was a 1.5 yr old forkie. My son went through his routine, but the buck moved behind some brush and didn't present a shot. I continued talking him through breathing and concentrating, but adrenaline started to get the better of him and he began to shake.

He said later he began to talk to himself and tell himself that he was fine. When the deer moved again and presented a shot at 72 yards, my son squeezed the trigger on the Savage 7mm-08 and the 120 gr Barnes ttsx passed perfectly through both lungs and the buck was dead within 15 seconds, not 5 yards from where he was shot.

I was one heck of a proud dad. 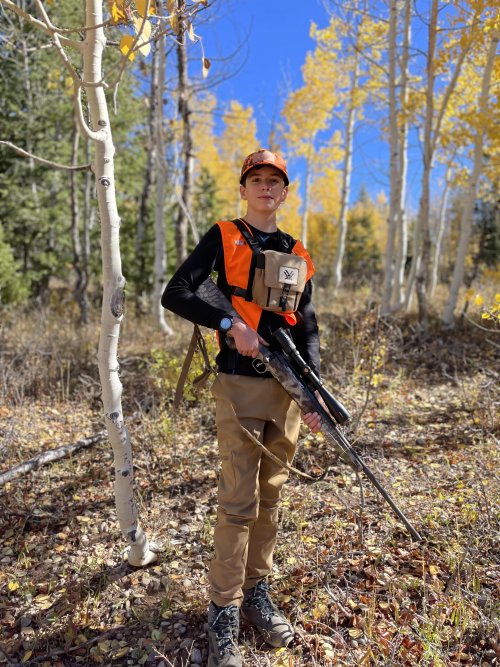 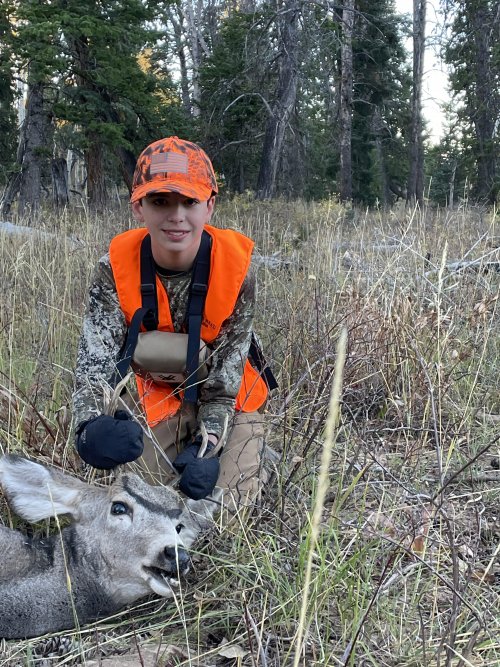 Good job dad and great memories created!! Those are memories that he will remember forever!

Doesn't get much better than that. Congrats to both of you.

Congrats! Love that rifle and stock

Congrats to you both!

Way to go boy!! That is awesome. Dad you did great. When your child fills their first tag it brings back all of those emotions and memories you've felt through the years watching them grow up.

Memories for a life time. That is awesome!

The posed photo looks like you green screened him into an ideal fall scene (by that I mean it’s looks almost to good to be true).

Congrats to your son on his deer and congrats to both of you for making some quality lifelong memories!

That's good stuff right there. Neither of you will forget that day.

Awesome job! Great first buck for the young man. Thanks for sharing

Nothing too fancy. It's a Savage Axis II in 7mm-08. Best shooting rifle I've had and only cost me around $300 when I bought it. The camo is Kryptek's Highland pattern.
Click to expand...

Hunter4Life78 said:
Way to go boy!! That is awesome. Dad you did great. When your child fills their first tag it brings back all of those emotions and memories you've felt through the years watching them grow up.

I was probably even more excited than he was. It really is cool to get to see your kids accomplish cool things.

The posed photo looks like you green screened him into an ideal fall scene (by that I mean it’s looks almost to good to be true).

I hope you and he have many many years together doing adventures together
Click to expand...

Yeah. Many years there is already some snow up in the area we were at. But this year, all of the Fall colors were still going and it was in the 60s during the day and 30s at night. Absolutely gorgeous. Hard to describe how much the scenery and location can help make a hunt that much more memorable.

Congrats! It's a great feeling seeing your son get his first buck!

jbseamus83 said:
I was probably even more excited than he was. It really is cool to get to see your kids accomplish cool things.
Click to expand...

And there is such a greater feeling when it hits you they took an interest in something you love to do and there's that verification that they do listen. May not remember to pick up their socks, but they listen when comes to hunting lol. Some of my Happiest times and my memories are in the woods my eldest daughter.

So awesome - congrats!! Sounds like you’ll have a hunting partner for years to come!
O

Congratulations to you both.
J

Congratulations young man! And you too dad for getting the young ones into a great way of life.

Very cool!
You must log in or register to reply here.

Both My Youth Hunters Got It Done
2

T
One day was enough