I have been hunting a handful of days here in Missouri. Bow season has been pretty good for my family and friends so far. I am luck enough to have a handful of acres to hunt within walking distance of the house. It has produced some pretty nice whitetail over the years. The bad part is that my brother inlaws have always had those nice deer. I am not a trophy hunter by any means. Any picture I have would show that.

This year I have put a lot more time into hunting smart. I have scouted with cameras and well before season started. I have also paid alot more attention to the wind and weather conditions. Around the first of Oct I shot a nice young doe to help put some meat in the freezer. 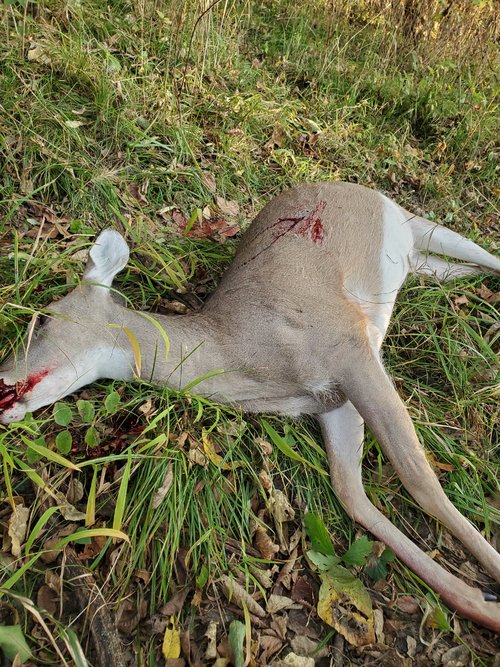 Fast forward to the morning of Halloween. I had a great south wind for the stand I wanted to hunt. Temperatures in the low 40's couldn't have set the scene any better. My brother inlaws have always had good luck on Halloween. I sat and as the sun started to light up the sky I had a small 4 point work his way in and make a rub. He milled around in front of the stand for a little while in no hurry to leave and never knowing I was watching him. After a while he worked his way to the south and out of view. He was gone for about 10 to 15 minutes when I decided it was time to get out the rattling antlers. I have been getting pics of bucks chasing so I knew there was a good chance I could attract some attention. I proceed to bang and rake and rattle the antlers of a small 8 point I shot last year. I went for about 25 seconds when I see a flash of brown coming down the trail towards me. I set the antlers down and to my disappointment its the same 4 point from a few minutes ago. I watch as he comes in looking for the action. Since there is nothing to watch and the action was coming from 15 foot in the air he decides to move on. I watch as he works of to my NE. As I turn around to look in front of me I see a flash of brown and rack. As fast I see it, it disappeared behind some brush moving quick to the east. I knew by the amount of rack that this was the big 10 shooter I was hoping to see. I get my bow in hand and watch as I see a flash of brown here and a flash there. He was doing what smart bucks do and making his way down wind of the sound and not coming out in the open. I finally get a good look as he comes out of the brush at about 40 yards straight to my left. He is well within my comfortable range but this stand is in some of the thickest brush on the property. He has no idea that in a matter of a few steps his life could come to an end. One that I am sure is wise as any. Has seen so many situations that he made the right call to keep him self alive and become a mature buck. I think in my head today is the day I am finally gonna punch the tag on a whitetail big enough to mount on the wall. He steps behind some cedars and I draw back and come set. He is closing the distance quick looking for the "bucks" that made so much noise fighting. 25 yards from my stand to the biggest deer I have had an opportunity to take a shot. I look through the peep and see my pin on his vitals as he is quartered to me. But between him and I that pin is not just on his vitals its also on a mess of twigs coming off an old dying tree. Do I shoot or should I wait for him to move. I didnt wanna take that shot I hoped he would move. When he finally did move it was to spin straight away and disappear into the thick brush he came from. My heart sank and I hung my bow back up and sat down. Since that encounter I have replayed that opportunity some many times and everytime i still tell myself I wouldnt shoot. I realize after that encounter this is why I love the chase and the hunt. Its not always about punching the tag or being able to post a grip and grin. Its more about the opportunity that we can have in the woods and see how or what makes these bucks/bulls so smart. Hopefully my next thread will be with the one that got away. Once conditions are right I will be back after him again.

Pretty sure this is him.
M

I know that feeling! It’s tough to resist not taking that shot. Keep at it. You will get a crack at him again! Good luck!

Better to wait for a sure kill shot,it sucks to track a badly hit buck and never find them!
You must log in or register to reply here.