When shooting a bear from spot and stalk, or over bait. What is your preferred shot placement? Do you go straight for a killing shot in the heart and lungs, or the point where the front leg meets the spine to break him down or someplace else?

All the big bad bear hunters we have here and no replies to your question?????

While I'm not much of a bear hunter, I have killed three of them, all with lung shots. I pretty much shoot them the same as I would a deer, elk, antelope, etc. right behind the shoulder. I've heard lots of crap about shooting them through the shoulders, etc. but I dont buy into that at all for several reasons. One being its damn tough to line up an animal perfectly and bust one shoulder, let alone both. Plus, I dont like taking chances shooting that far forward on any animal. I plug them right in the center of the lungs if possible, gives me some room for error. But, thats just me, others have much more experience hunting bears and probably know more as to where to shoot them. To me, they're just another animal with a heart, lungs, and hair, they die about the same as everything else I've shot.

I went grizzly hunting with a buddy from AK and he shot his bear behind the shoulder with a 338. The entrance side he just barely nicked the shoulder blade exited about 6 inches behind the off shoulder. The bear ran about 50 yards after the hit and fell over dead.

Heres a picture kind of showing the shot placement: 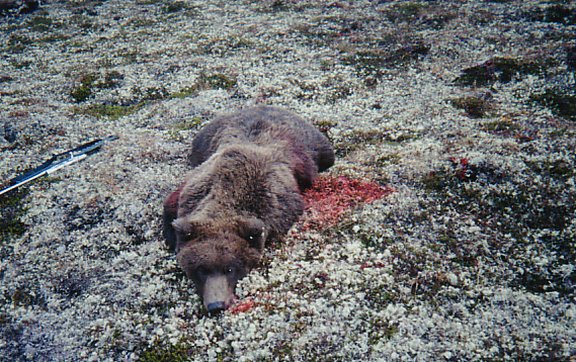 My shot is ALWAYS the Lunch area. Errrr, I mean LUNG area.. Lunch area would be the Guts

The best place to put anything down is Definately the Spine of Course but the Shot placement it a Tough one. I like the Area right Behind the Front shoulder quartering away. I like that shot on Any Animal. Even a Bear.

We've come to learn that the Vitals on a Bear are a bit lower then on a deer ort Elk. I don't know why but they seem to be. I'm sure someone has a Link to a bear Vital Chart ? I used to but can't find it off hand.
S

The lungs!
give it a rest nuts, I don't work weekends!
T

I've made the shot under the ear from a rest, and I've even shot one up close and slobbering personal, but I prefer to punch a round right behind the shoulder through the lungs and boiler maker.

Location
In a box under a bridge

Grizz I've all ways been told to "bustum down first" Then killem! If your gun is big enough blast them right through the shoulder,first then a head or heart shot. The only bears I've taken were Blacks and I put them down in there tracks with a shot just behind the shoulder, just remember there heart is quite low and wall protected on a bear
You must log in or register to reply here.