A year one of y'all that tried to go hunting on the east side of the Bridger Mountains, utilizing a FS road, encountered a private landowner's outfitter who locked the gate, cutting off access that had previously been there before, though there was no easement with the FS. He called, I found all the landowner information and got in touch with Lisa Stoeffler at the Forest Service. She confirmed all the information I researched, explained what had been transpiring with this landowner, all the negotiations they were trying to have with him. Get this, he was demanding the FS maintain that road, but refused public access.

So finally, the FS explained that they could simply bypass his place, improve the road, restoring the public's access to all the land north of there. He still would not budge, so the FS now has this out for public comment. The road will not only not be on his land for that almost 1/3 of a mile, but it won't even touch his land either, do you know what that means for him?

Here is the Forest Service page. You can see the map and the close up, how this road change would actually benefit the public, bypass the privatizers land and stick it to them. Public Comments are due about December 16th. 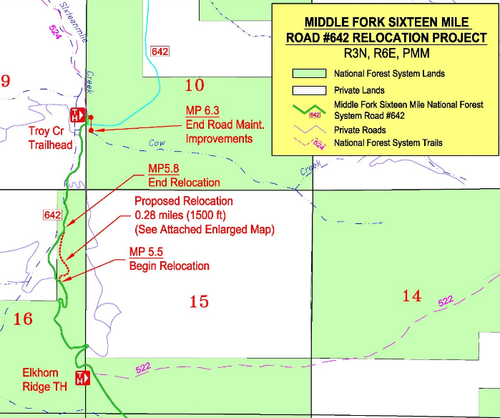 That outfitter definitely kills some great bulls up there, based on his web page.... 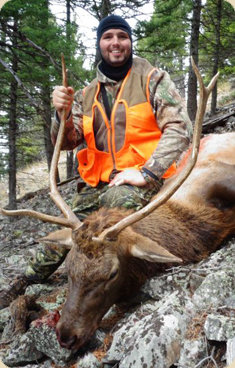 That outfitter definitely kills some great bulls up there, based on his web page....
Click to expand...

My thoughts as well.

I think this is a road, not a trail. Is motorized traffic allowed?

Just avoiding the private seems to make more sense if possible. Are there considerations that would prevent supporting this? Will the new route create any additional burdens (like climbing a steep hill, etc)?

The only problem with moving it off the private land is, the dickhead wins...
K

It is a public access county road - Petterson Rd., supported by fuel tax, up to a point, then shortly before it enters on to Logan's private land, it is a FS road. The private land just north of Logan's does have a FS easement. Logan only owns that 130 acre parcel, but it is strategic, in that it was one of the only ones without a previous FS easement.

Based on my calls with FS and the satellite, it is supposed to be a better route, reduced grade, and yes, it is motor vehicle. My red dashed line is an approximation, based on their map, over a google satellite.

I don't think the landowner will be winning, as the road change occurs before his land and there is no other access. He would have to negotiate with the FS for access. 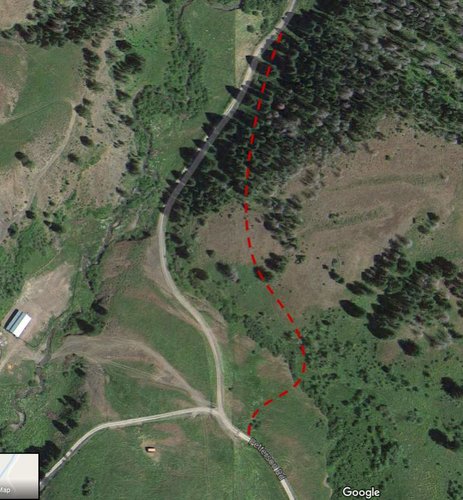 iI think a large ditch on the other side of the road where it connects for the re-routing of the road would be good. I mean a big DITCH! John

the forest service should not have to allow any access off of the new forest service rd, at any cost, the guy can own one on them "landlocked parcels"

why would anyone be against this new road ?
C

Get this, he was demanding the FS maintain that road, but refused public access.
Click to expand...

I generally am not surprised when I find someone is trying to screw the public. What I do object to, however, is when they expect us to help them do it.

Thank you, Kat. We are very lucky to have you on our side.
K

Corax said:
Thank you, Kat. We are very lucky to have you on our side.
Click to expand...

Thank you, and the thanks begins with the hunter that made the time to do something more than just walk away grumbling about it (I can't remember his name without finding that stack of notes from last year, but he is a HuntTalker). The only way that we are going to gain our access back is to say and do something about it when it happens, to the authorities.

I have been doing all this research for a State Access history for a PLWA article over the last month. Reading through all these legislative histories, years of State Land Board meeting minutes, I am seriously disgusted on how much access may be on the books in theory, but repeated testimony of hunters/anglers as to the reality of blocked access. It put me in a seriously pissed off mood, which I channeled into a State Lands public information request.

This is good news. Thank you Kat!

katqanna said:
Thank you, and the thanks begins with the hunter that made the time to do something more than just walk away grumbling about it (I can't remember his name without finding that stack of notes from last year, but he is a HuntTalker). The only way that we are going to gain our access back is to say and do something about it when it happens, to the authorities.
Click to expand...

You have inspired me. I may do something similar . (inside joke)
S

Kat, PLWA is an organization that does the same type of research and work to maintain and reopen such access to public lands and waters and has done so for three decades in Montana. Your collaboration with that organization could exponentially enhance the public access efforts. Are you in contact with PLWA?

Kudos to you for all your hard work Kat.

Appreciate your hard work and dedication Kat. I Can't see why anyone would oppose this reroute. I think there should be a you tube documentary done the day the dozer shows up! The Look on that poor landowners face...
K

Straight Arrow, I have been doing independent contract work for PLWA for about a year now, with their Constant Contact, website articles (we are developing a whole new website - I needed to be able to do far more than the older platform would allow) and their hard copy Key newsletter. That is the state access history I am researching and writing currently for the next Key that will come out shortly. I needed to create an archive of legal documents and such for the public, researchers, journalists and law students to reference. So I have been searching and purchasing law cases and legislative histories, access the founders like Schoonen and Atcheson, to scan what they have before it disappears. We need these resources to fight back. I do this in between my EMWH work. I enjoy the access work.

Southern Elk, Gerald, and Team Hoyt thank you, this work really is alot of fun for me.

Oh, and I should also mention, thanks go the employees of agencies who do help to uphold the public trust. They are always an inspiration.

Rob, should I tell them?

Rob boldly scouted and hunted on a very old FS trail that a landowner has cut off access to and had the pleasure of having a sheriff waiting for him when he came out the second trip. This will be a good legal opportunity to push back legally. I have giant ass maps with all the blocked off trails on the Crazy's and a huge FOIA with documentation, which will help a number of us that have decided to push back in certain areas. If they think they are going after a single hunter by ticketing Rob, they are sadly mistaken. Rob, you should share your hearing date with them.

There's no way the FS will landlock him. They can't afford to be confrontational like that.
Last edited: Nov 30, 2016

If someone typed "Big Sky Outfitting Wilsall, MT review" I wonder if this thread would come up in search results?
You must log in or register to reply here.

Does anybody really regulate outfitters on USFS lands?
2 3