Once in a lifetime Idaho moose

cool story! definitely would have loved to see that going down the road.

Spend any amount of time on this website and you'll say "now I've seen it all" more than once or twice, especially when it comes to hauling out moose. This thread was one of those times. Congrats on punching the tag.

Did the Elk get to ride the carrier too? Congratulations on both hunts! Cheers to full freezers!

bucdoego said:
Did the Elk get to ride the carrier too? Congratulations on both hunts! Cheers to full freezers!
Click to expand...

No, the elk rode in the back of the big truck. I thought I had a buddy's flat deck trailer at the bottom of the mountain I could borrow for the moose, or I would have brought the big truck for that one also. But buddy at the bottom of the mountain had the flat deck off somewhere the day I got the moose and hadn't told me until I called asking to borrow it.
B

@NorthIdahoDude How much moose meat did you get in pounds after butchering?

brymoore said:
@NorthIdahoDude How much moose meat did you get in pounds after butchering?
Click to expand...

Don't know yet, still butchering! I'll ballpark and say well over 300, but won't know for another week.

I sure hope you have 3 or 4 freezers to hold all that meat! Congrats on the moose and elk!

Assuming we didn't miss a few bags somewhere in all the insanity (a distinct possibility, there was around 300 individual freezer wrapped packets of meat, stored in 3 separate freezers, that we were taking out in bags of around 5lbs each to weigh), the final weigh-out for the meat in the freezer was 292lbs (not counting the ribcage or meat we ate in the meantime). Between my wife and I and friends we've had over in the meantime, we had already ate about 20% of one backstrap and the tenderloins by then, and some ribs, which was probably another 15lbs or so. So the real net was comfortably over 300, but not by all that much.

Guesstimating I probably got between 40% and 45% yield in terms of cut/wrapped ready-to-eat meat vs live weight, that puts live weight at somewhere around 700 to 750lbs, which (from what I read on the internet) probably about right for not-a-monster but not-a-baby Sharis bull.

Which also means I probably was over the weight rating of my hitch carrier - I don't think there was more than 100lbs in the guts I pulled out of him before we drug him home, so 500lb hitch carrier had about 600lbs on it. oops.

Missed this one, congrats on the moose!!!! Helluva a job on getting him home whole. Damn good adventure with the wife in tow! Great write up!
Matt

NorthIdahoDude said:
So, for the last 18 years I have been putting in for a moose tag in the Pacific NorthWest. I am not a traveling hunter, so the tags I put in for are close to home, wherever that may be that year. So after 18 years of no tag, you could have knocked me over with a feather when I got the email from IDFG saying I had successfully drawn a moose tag in Unit 2, my home unit!!!! For dates that coincided with the peak rut no less!!!! I have been saying for years, if they would just give me a moose tag in Unit 2, they might as well cut and wrap it for me too. Not so much in the far north part of Unit 2, but in the central to north-central parts of Unit 2, it's a rare deer hunt I've been on where I didn't also see a moose. So let's just say I was pretty stoked!

Work and life has been insane this year (word to the wise: never build a house, it will suck up all your spare time, money, and energy for years), so I didn't get to scout near as much as I would have liked. However, having seen a lot of moose while deer hunting over the years, I still had a pretty good idea where to start. My only scouting consisted of driving around an area I hadn't hunted in about 10 years to re-familiarize myself with it, and pick where wanted to be on opening day. Found a great spot, fairly high elevation for the area, where a massive spring water flow comes out of the side of the mountain, enough so that it serves as the headwaters for a year round creek. There was also some roads and skid trails in the area to facilitate extraction if we got one there, and the foliage in the area also looked like great moose food, so I marked that on my GPS as my preferred day 1 spot.

Day 1 finally came, and I headed out into the dark morning, with The Wife(tm) in tow. She and I have been hunting partners since the day we started hunting many years ago, so while she could not call or shoot on this hunt, there was no way was I going to leave her sitting at home for this adventure! We setup overlooking a clear section of hill/mountain side about 500 yards from the main water source, and using some rolled up birch bark, I commenced to doing my best impersonation of a horny cow moose. I called about every 15 minutes, till noon time rolled around and we had to bail out. Before we left, I got up and did about an hour of boots-on-the-ground scouting through the nooks and crannies of the hill/mountainside we were on. That was very instructive, as I found out that we had somehow set up in the worst possible spot - I saw moose tracks about 500 yards off our right (out of sight of where we had set up), and off to our left, more/less right around the spring water area, was covered in moose tracks (also, out of sight of where we had set up). I made mental notes of all that, and we called it a day.

Day 2, had to do some house stuff in the morning, so we didn't get rolling till around noon. This time we set up more/less directly above the water source. It was a lot thicker over in this part of the hillside, so while I did have some good shooting lanes out to around 200 yards, there was a lot of brush and branches I would have to watch out for when taking a shot. As with the previous day, I did my best impersonation of a horny cow moose about every 10-15 minutes as we enjoyed the beautiful afternoon on the mountainside.

This had been going on for about an hour and a half, when my wife and I both heard that classic "muwah, muwah, muwah" of a bull moose off in the distance. Of course, he's coming from our downwind, which is blowing UP the mountain, which also puts him coming in from exactly the direction I am not setup to take a shot. I shut up all calling and waited, hoping he'd pass by us and give me a shot. The "muwah, muwah, muwah" got closer, and we started hearing brush crunch as the bull came in, but we still couldn't see him. Then he went silent and stopped calling, and I could just see a flash of him crunching through the trees, moving at a pretty fair clip down the mountain. Damn it, I bet he caught our wind, and he's GTFO'ing!!! I cupped my hands around my mouth and gave him a quick "muwah, muwah" of my own and then set the rifle on my mono-pod shooting stick and waited. Sure enough, that got his attention, and he turned and came out of the trees so he could get a look at me. He came till just his head and shoulders were sticking out of the woods and gave me a "muwah, muwah" and swung his head back and forth looking for the source of the call I'd just given. That was all I needed to happen, and after kind of leaning back and forth a time or two to make sure I was not going to wing a branch or brush with my bullet, I dropped the hammer on a perfect quartering-to shot, with him about 100 ish yards out.

He lurched forward at the shot, but he was moving like he was hurt bad, and I was fairly confident I had hit him pretty solid. He made about 30 yards and the stopped, full broadside to me with no branches or brush in the way, and looked up at me again. I was about 95% sure he was about to go down right there, but I wasn't going to take any chances on having maybe had my bullet deflected somewhat on the first shot, so I pulled the trigger one more time for insurance. He stumbled about 2 steps at the second shot, and then he hit the dirt hard and never moved again.

Right up until that moment, I had been calm, cool, and collected, with a laser focus on getting the job done. Once he hit the ground and was obviously not twitching, I took a couple of deep breaths, let go of the mental grip I had on myself, and the adrenaline took over and the shakes flowed through me. I looked over at The Wife(tm), and I think she was shaking harder than I was. Did that just happen? Oh HELL YES, THAT JUST HAPPENED!!!!!! She told me later that she had been shaking since she heard him calling as he was coming in. This was not the first time The Wife(tm) and I have shared an adventure like this, but this one will definitely be right up there in the top 3 coolest hunts we've ever done together.

It was about 2PM, and I have friends who live at the base of the mountain we were on. A few phone calls later, a buddy with an ATV and a winch and a long piece of rope was on his way, and The Wife(tm) and I set about to gutting him and packing the body cavity with ice. We were just wrapping up the ice packing job when he showed up. Even with the ATV and the winch, it was still a lot of manhandling, brute force, and ignorance involved in getting him back to the 4runner, but we got it done. Unfortunately, my other buddy from down the hill who had promised a few days earlier to let me borrow his flat-deck trailer if I got a moose was a no-show. Hrmm... what to do... well, I've got a hitch-mount carrier that's rated for 500 lbs, and this isn't the biggest Shiras moose anyone ever saw, so let's see what we can do here. Son of a biscuit, turns out you can load whole moose onto a hitch-mounted carrier, and haul him home that way. I am fairly confident we exceeded the weight rating of the hitch carrier, but probably not by all that much, LOL. It was straight up north Idaho redneckery at its finest, but I am not in any way ashamed of that.

I was hurt bad enough from getting him off the mountain that I called another buddy so I'd have help skinning and quartering him when I got home. Thank God for good friends!!! I'll post postmortem notes here in a bit.

Anyway, I know, I know, pics or it didn't happen.

Finally got the euro mount back from the taxidermist. Came out great, IMHO! 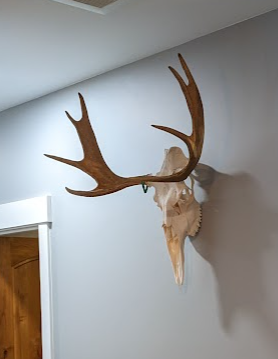 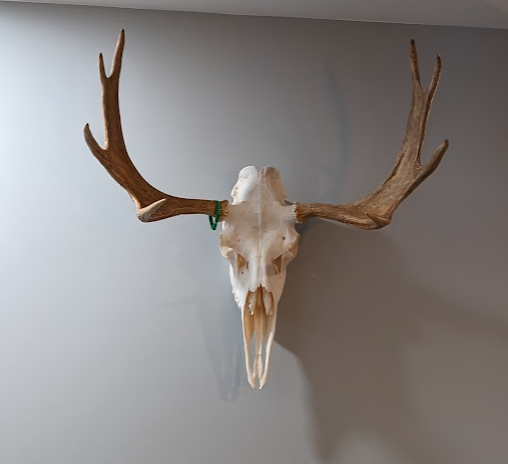