So I thought I would share a few words and some pictures from a couple North Idaho moose hunts. My 11yr old son and 14yr old daughter each drew moose tags for different units here in in the panhandle. My cousin from Salmon, who’s age I will not disclose out of respect, also drew a tag for the same unit that my daughter had drawn in. Needless to say I’ve had the opportunity to be with family as they’ve hunted moose this fall. 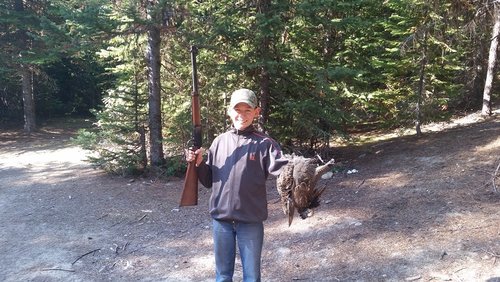 While looking for a bull moose big enough for my son to shoot we did take out our frustration on some of these.

After hunting hard for three days and nearly being eaten by wolves, we were rewarded with a 200ish yard shot on this bull. My son used a stump to help him make a steep uphill shot dropping the bull where it stood. 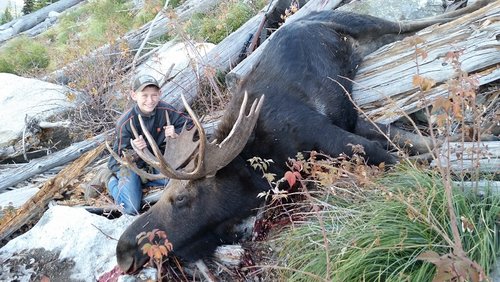 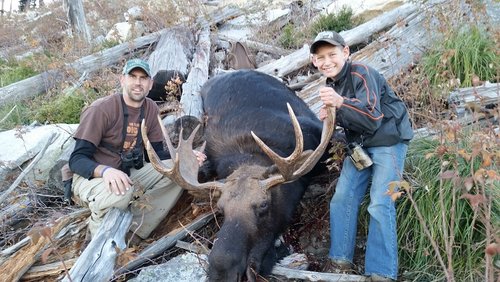 The bull tried to stand back up and I told him “shoot him again!” He did and the moose died. A 350 Rem Mag with 225 grain partition hand loads kills on both ends according to my 11yr old son. One happy kid and one proud papa! 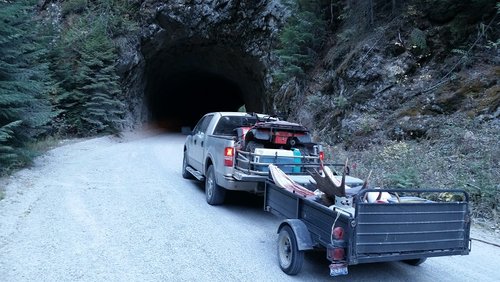 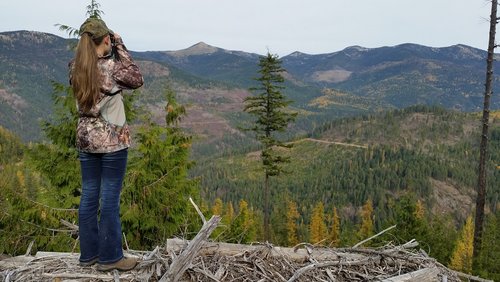 Two weeks later looking for a bull for my daughter. Some moose spotted but none big enough that she wanted to end her hunt on quite yet. 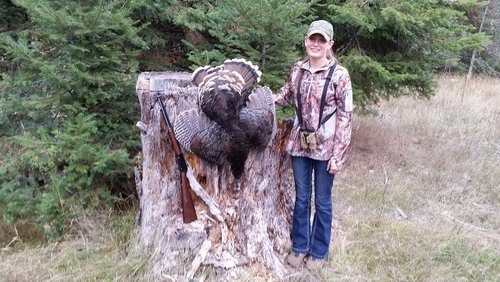 We did give the 22 another work out and shot the biggest blue grouse known to man! We didn’t take a picture of it so instead we did of this turkey. 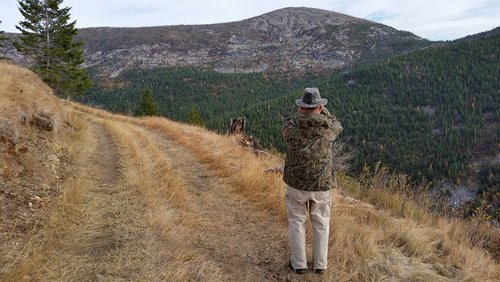 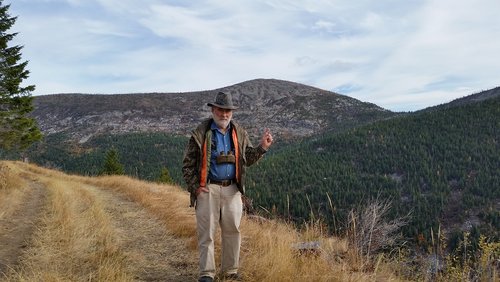 My cousin John looking longingly at 45 plus inch bull moose. Trust me, it’s right on top of his index finger and was one dandy of a bull. I think he wanted to give me the other finger when I told him I didn’t want to pack a moose down from up there! 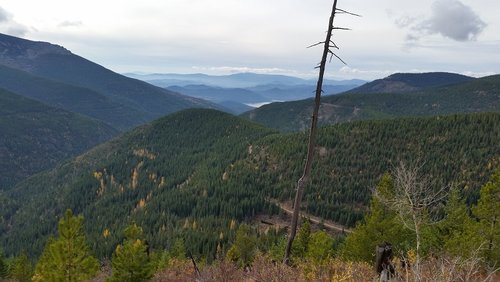 Complementary scenery pictures of North Idaho with part of secret lake in the background! 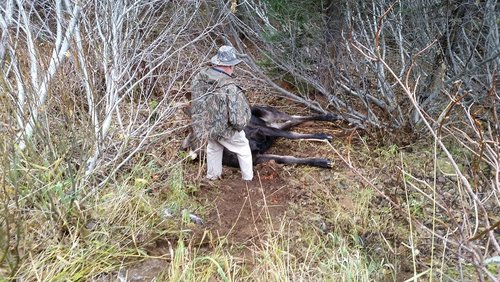 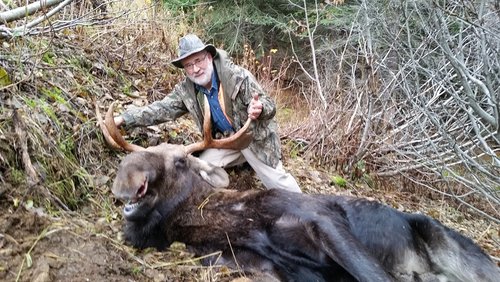 A bull moose that stood on the side of the road to long and John thinking “What have I done?!” Me thinking “I love what you’ve done!” A snatch block, tow strap and some cable = 1 whole bull moose loaded in the back of the truck. 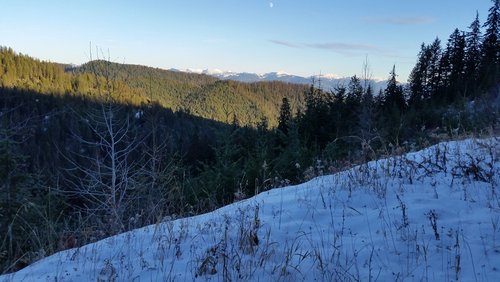 More daddy daughter trips out in the woods with no big bulls spotted. Little brother shot a 41 inch bull and I think she wanted to best him. Took her out last Friday which was the last day we could hunt before the season ended. Saw several moose but none wearing any headgear.

Took a short walk down a skid trail late in the afternoon and found tracks in the snow. Walked a little further and find a fresh moose paddle in the snow. 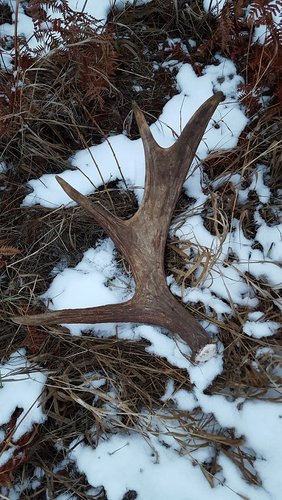 Walk a bit further and spot 2 small bulls. We look them over and discuss what she wants to do. Last hour of daylight we can hunt before the season ends for her. She can wait and hope to draw another tag or kill a moose right now. We watch the moose a bit longer before she says “I think I will shoot that one.” The 350 Rem mag does quick work and I have one very happy 14 year old! 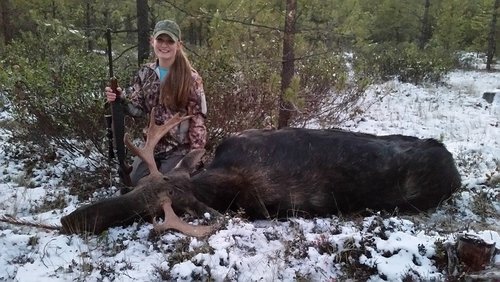 It’s been a great season with many great memories made being in the woods with family, looking forward to next year!
Mica Man

Heck of a season for your family. So awesome that both your kids were able to shoot moose in one season. Very cool that your cousin got a moose out whole too. Holy cow. Good job and congratulations to all!

Wow, what a dream hunt! Congrats to you all.

Tell us about the wolves...
Congrats!

That is awesome, Congrats to you all!

With your sheep hunt and all of this, are they going to make you go through orientation at work again after all the seasons close?
1

Mucho congrats! I'm guessing the freezer at your place "runneth over"! That is A LOT of meat. Thanks for sharing.

Very very cool!!
Congrats to all!

Man, you are set for meat for the next 5-6 years! Congrats!

That's a lot of moose hunting, but looks like a lot of fun as well.

Is it legal to have that much fun in one season? Congrats to you and your family.

congrats, that was great to hunt with your family

man,, your family is lucky in moose draws!!

And that is a PILE of moose meat! Good thing moose meat is awesome!!

What an awesome fall. Congrats on the epic season.
B

Wow...great stuff
You must log in or register to reply here.