Quick report as I catch up on a thousand or so work emails and issues.

Returned from the Gila late Tuesday. My best bud drew 16C this year (I had the early rifle tag in 2016 and he and our other buddy were both there with me. Our turn to return the favor).

We knew it would be dry, but it was worse than I could imagine (until Monday night). There had been no measurable precipitation in 72 days before the season started. Nearly all the tanks and springs were dry. Couple that with elk that have been hunted for ~2 months, sustained 20kn winds for a couple days, 3X the tags of 1st rifle, no advance scouting, and some other issues and you had the makings of a tough elk hunt in a great elk place.

Those 2 got in early Thursday and I arrived right at dark Thursday evening. Given what we learned last time, we checked initial plans A,B,C on Friday. Plan A - a string of wallows between a tank that's not on any maps and a pond that everyone knows about - was dry. The pond had 25% the water it normally does, and a handful of cow and calf tracks around it, but when 2 trucks pulled by in the 30 minutes we were there, we wrote it off. Plan B is an intercept/ambush area in steep ponderosa where a natural spring creates some large pools and feeds a couple tanks on nearby private. All the tanks were empty and the pools we found last time didn't have enough water for a family of mice. Plan C is near Plan A. We knew there was private water nearby. Plan C became plan A. 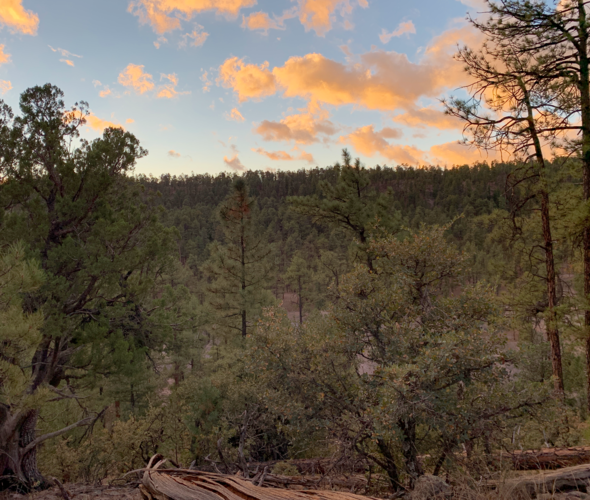 I'll shorten the first few days of the hunt into 'lots of looking and no activity'. We found relatively fresh sign here and there, but not a lot and not enough. The nearest camp to us was also hunting (4 tags) in the same general part of the unit. They took a nice 320-ish bull opening morning about 4 miles from where we were, which got our hopes up a bit. We went to plan 'D' which is a gnarly canyon complex that sees little human traffic that we'd sniffed out last time. It's a horrible "road" for 4-5 miles and then another few on foot to the promising area, a big bowl with small creeks exiting in 3-4 places, and some not-well-known springs on the back side of it. Glassed til dark Sunday night to no avail and were back in position Monday an hour before light. Nothing but a coyote that came to investigate me eating my sandwich as dawn came up. We hiked the additioanl couple miles to the springs - which had small amounts of water, but no fresh sign. One big pool, but the tracks were about a week old. 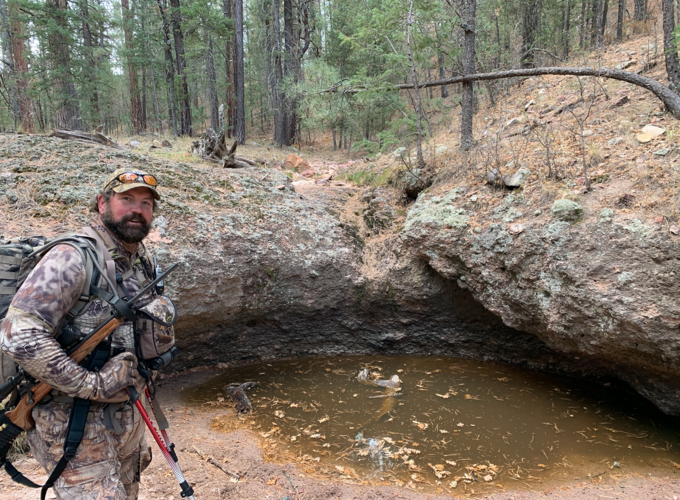 Monday evening, with weather coming in, we were back near our opening day spot but down the slope/out of the timber a bit to watch travel routes through the P-J. I'd gone walkabout for a bit sunday morning while the guys watched the 'main' meadow at the edge of timber, and found a string of cuts and openings in some P-J that sloped down to a dry creek/arroyo that provided a perfect evening travel route (into the wind, towards water). The largest opening was filled with rubs and ripped up trees. Tagholder got comfortable on top of that one, myself and other guy flanked slightly above him on narrower openings to his right and left and had cow calls ready for a quick chirp if we saw activity. About 1h before dark, I hear some commotion, then a shot, then 3 bulls come racing past me nose-to-tail at 20 yards. A big 5, a smaller broken 6 and a really broken 3x4. I marked their line of travel and went to collect the shooter. First thing I asked was 'how many bulls were there?' - hoping to hear '4'. 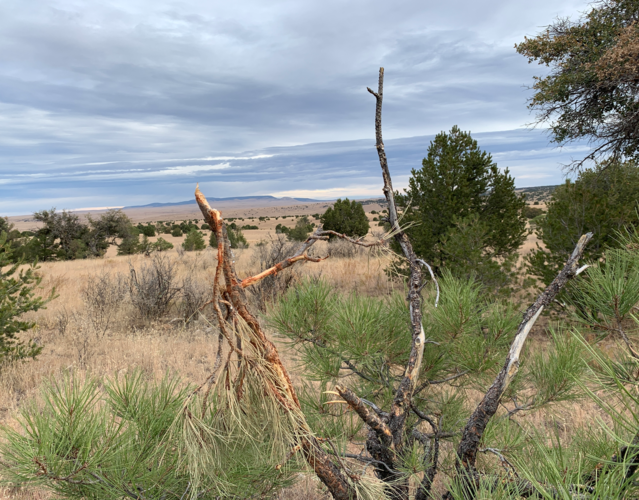 Alas, the answer was '3' and they were in the same order when they loped past him. They were moving quick (as it turned out, a ranch guide and his client were chasing them) and he wasn't confident in the shot at all, said the bull didnt react/didnt slow down, no hair, no blood. We spent the next hour finding their tracks (found all 3 sets), looking for blood (none), evidence of a struggling bull (all three sets of tracks were normal spacing and went up a grade, over rock outcroppings, etc), and when they'd run past me, none looked worse for wear. Right at dark (probably a little after, tbh), we heard a series of shots from the private that they'd run towards. We followed the tracks to the border while one guy went and scoured for blood again. At that point it was dead dark and starting to spit rain, but through all that, I didn't see or hear any evidence that he'd hit the bull. He had shot offhand and with running elk - we (including the shooter) are positive he shot right over the middle bull. A quiet hike back to the rig. Then - the rain turned to sleet (which is a major problem on those roads), and turned to snow a couple hours later. Buddies were spent and with their 23h drive home, the tagholder decided to call it and leave the next morning instead of Wednesday as planned. I understood (and honestly, if it warmed up and melted that 6-8" of snow, we'd have been extremely limited on locales).

I remain awestruck by the Gila. Such an amazing place that represents so much of what we are about as Public Land advocates and hunters, and full of elk with plenty of big ones. But it is no pushover hunt. Late rifle in C in particular.
Last edited: Oct 30, 2020

Thanks for sharing your hunt. Sometimes the elk win....I reckon that's why it's hunting and not shooting. The way it worked out, the ground was so warm that only a few inches of snow stuck. Mud and ponding the next day wasn't an issue, where I am anyway. It was unusually hot in the 16s and the flies were horrible. The bull I harvested (in another 16 unit) was on his way to a wallow. He was covered from ears to hooves in dried mud the way it was. About 25% of the watershed tanks had any water at all. Under the best of conditions, 5 days isn't very much time to harvest a mature bull.
H

Thanks for update,sorry for finale.
Been extremely dry in SW NM. I got 6"of snow out of that storm and it's dry just about again. 1st moisture in 70+days here.
Glad you & Gila did find some water to check.
You must log in or register to reply here.