So...This spring my wife's friend was over at the house with her husband. We took her deer hunting last year for 2 days. That's the extent of her hunting experience. She asked me," What's the most fun hunt you've ever been on?"

With that question my hunting season was going to change. Long story short she put in, and DREW an Idaho moose tag. We've been hunting on days off and have seen cows. Last night we saw a NICE bull. Probably 40" 3 fronts on one side and 2 on the other. 13 points on both sides. I think... here's the problem. That's the first and only bull she's seen. She was rather confused on if she should shoot or not. I told her it was a little bigger than mine and that she should really consider shooting it. Without a good reference of what a good Shiras is, she hesitated. She doesn't have the experience to know what a good shiras looks like. So I can't blame her. It's the first one we've seen and have 2 months of season left. Plus I'm a touch rusty on judging them. I really think it's a good one. But I'm not sure. It turns out from scouring the internet that there aren't that many pictures with spread and score to show her. There's a few. Most of the stuff is on Alaskan moose. I think she looked at pics of those and doesn't know what a good shiras looks like. But not that much on field judging Shiras when talking to a hunter with very little experience.

If you could post some pictures of your shiras with a spread and total score so we have something to compare it to that would be GREATLY appreciated. Especially hunt photos with hide on. So I can sit down and go over field judging with her using ears, eyes, head length, etc.

This is my moose. It doesn't help that it's the only one she's seen up close and it's 138 inches with a 40 inch spread. Imagine the first time you've gone fishing for a species. Catch one and look around like, "Is this a good one?" Pretty much where she's at...

Good luck to her, but stories like this make me more convinced I’m never going to draw a moose tag in this state! I think I figured out I’ve drawn one tag(75% odds deer tag) in 28 years of applying for things

40 plus wide is a good Shiras but if you’re concerned about how it scores it’s a must to have at least two brow tines on each side. The length of palm has a huge impact on score. If your wife is new to hunting she should be thankful that she drew such a coveted tag and shoot a good representative animal. Good luck.

The one in the snow is my Idaho bull. 39.5 inches wide, nothing special. Backcountry unit ...ten days of hunting...only bull. Bang!

My wife's bull was a bit over 40 inches with more going on. The little girl in the pic just turned ten and drew that same tag her mom got and hopes to add a moose to her winter lion she got in January....so maybe I'll have more pics in the coming weeks.

Good luck. I am trigger happy and not often too patient. I would have gone after what you described, but many guys think there is something wrong with me.... mentally.

2015 hunt here in Washington after putting in for 38 years. One shot in front of the hip and out through the far shoulder with a 338..solo and about a mile + from the road. He was only 39", but he's all I would have wanted to cut up and pack out alone!!! 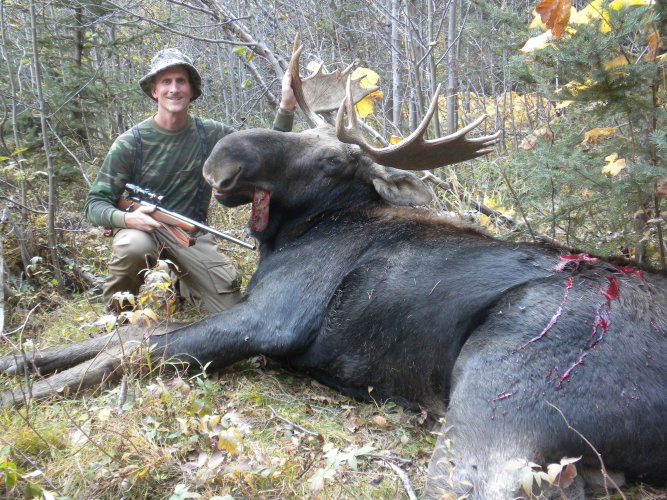 Moose aren’t easy to judge. I spent a lot of time last summer and fall scouting and hunting for a Shira’s moose and have some pictures and other successful hunts. 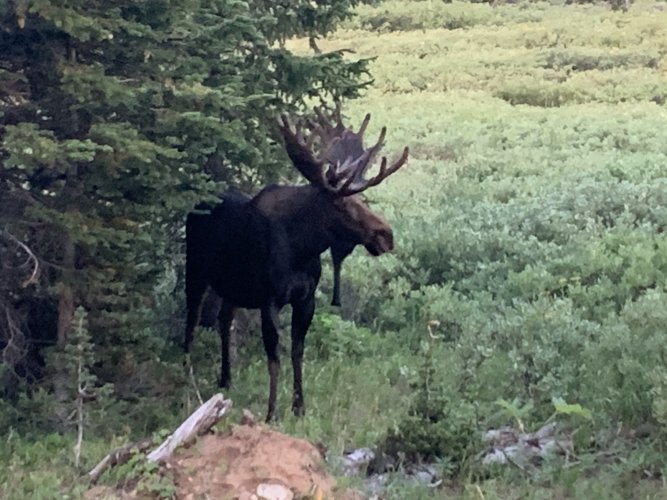 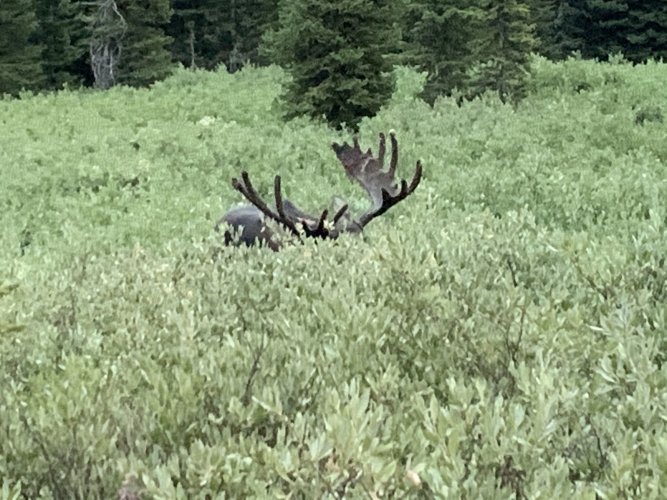 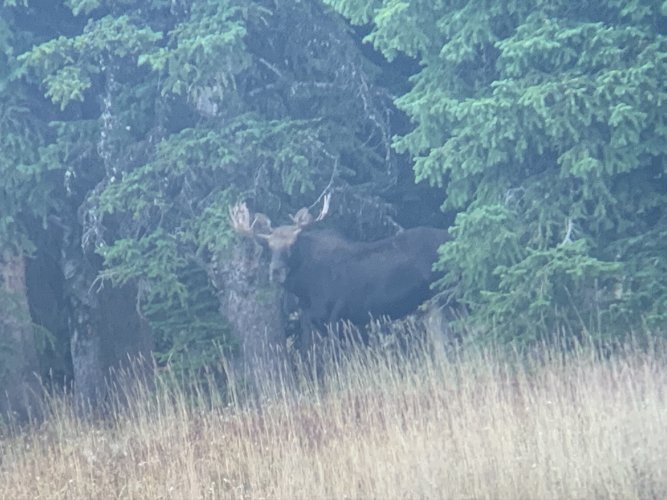 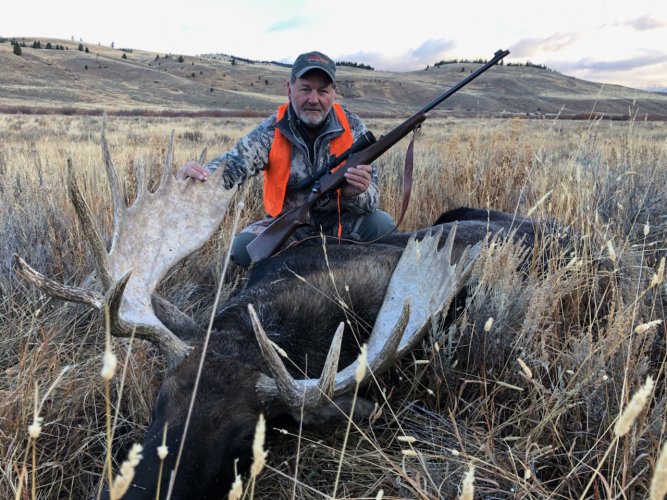 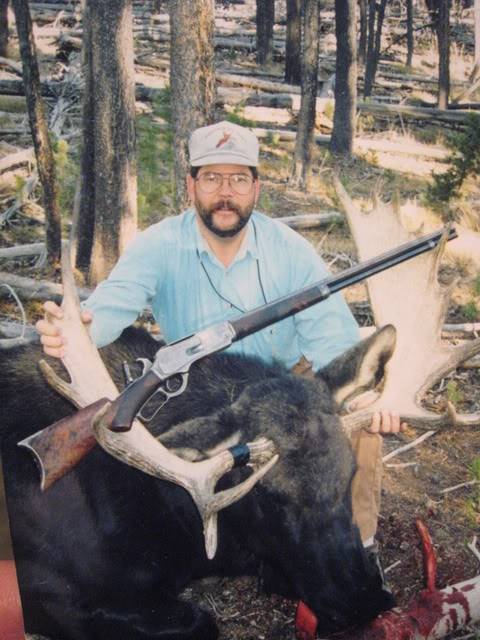 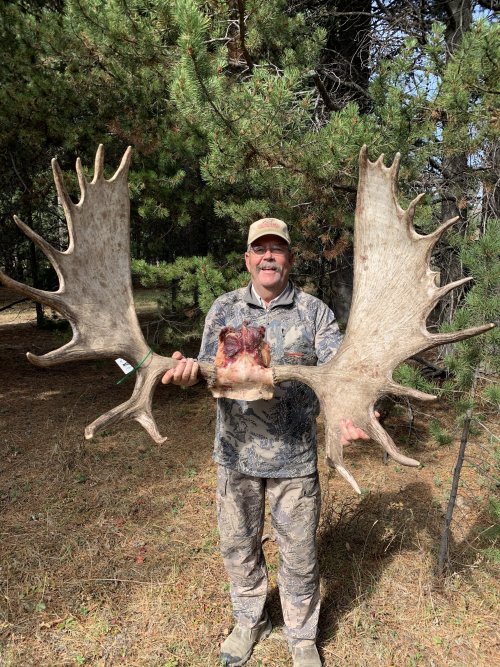 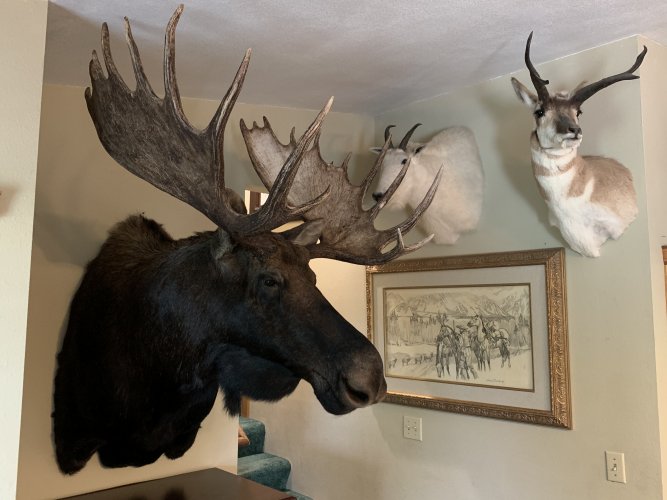 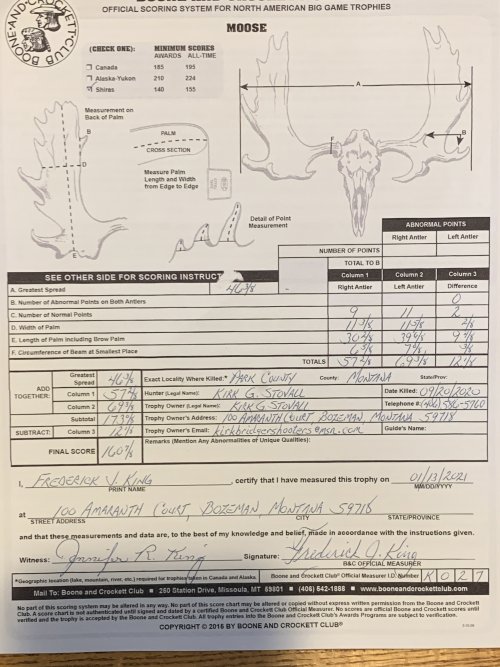 Great pics and congrats on your Booner Kirk. 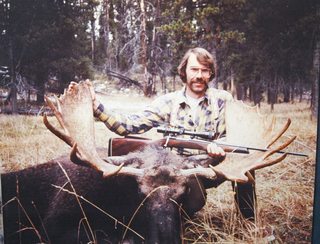 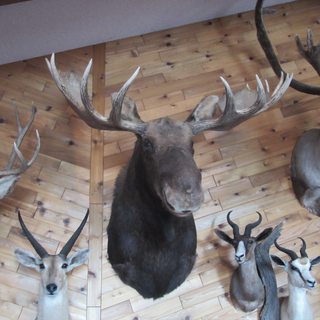 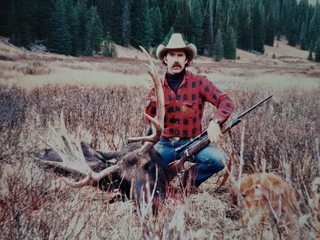 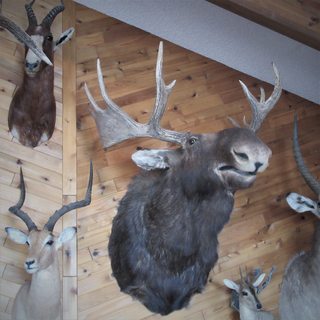 I also took a friend moose hunting in the mid '80s, and opening morning he shot a bull that was 49" wide, I believe 12 points on each side, and scored 175. At that time he was #4 in Montana.

buffybr said:
Great pics and congrats on your Booner Kirk.

Has George shown you that big bull in the Powderhorn that is from Montana and scores in the 170’s? It is a nice bull...

shrapnel said:
Has George shown you that big bull in the Powderhorn that is from Montana and scores in the 170’s? It is a nice bull...
Click to expand...

Was that one shot by Ken Slaght?

Brow tines? Moose have 'em? Mine didn't. Was near where could park the truck, though, so there was that factor of an easy pack out. Idaho a few years ago. 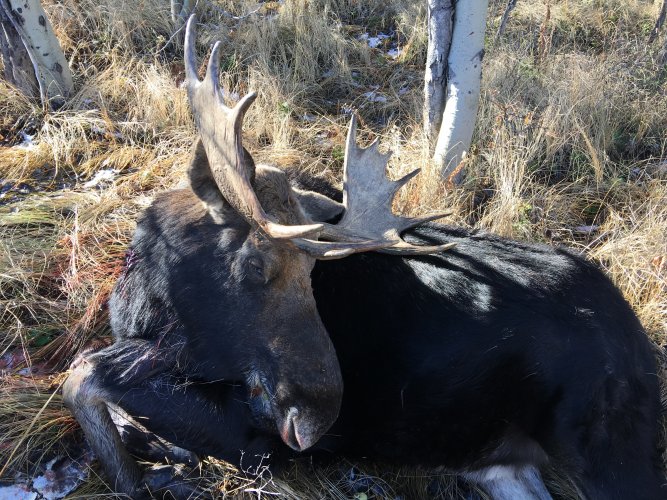 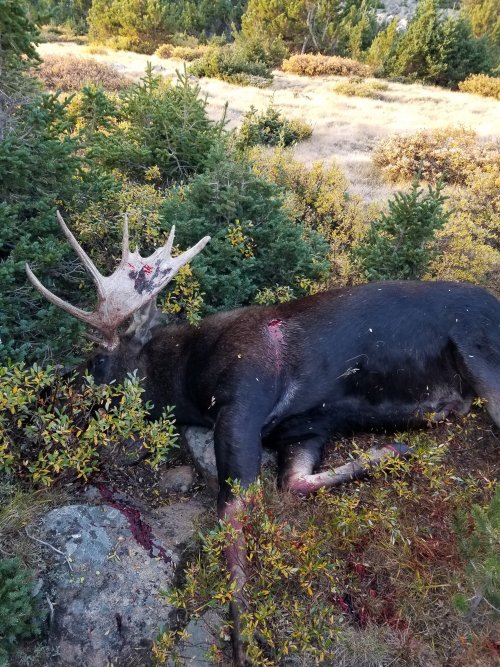 starting to get addicted to these picture threads! Nice bull!

Rules of thumb for a B&C min moose from what I've seen on 10+ shiras moose hunts plus scoring 20 or so for B&C.

13x13 with multiple brows is a "plug your ears" bull in my mind. 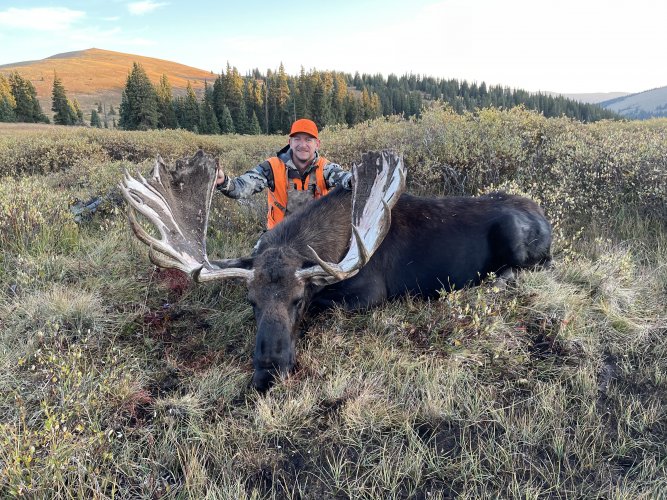 That is awesome
E

congrats on some awesome bulls! Seeing these pictures has me even more worked up for my SE Idaho moose hunt in 2 weeks!

A great bull, congrats!!
You must log in or register to reply here.

A blonde, a brunette and a red head go hunting....