River has been slow lately, so I went to the "pintail" spot, which is a much longer drive, then requires a 30+ minute paddle. Main goal was actually mallards, I needed 4 more to reach a personal goal I have for each duck season. Overall, this season has been a bit below average, but it was made worse by a knee injury I sustained in mid-November, missed several hunts during prime duck season. Otherwise, I probably would have reached my mallard goal a week or two ago, I admit I was feeling some pressure yesterday and I hate that. I normally reach my mallard "goal" mid-season, or maybe 2/3 way through, it's just something I keep track of, don't fret over it, but this year was different.

The "pintail spot" has been a bit of a rollercoaster this year, some great days and some mediocre ones. And lately the ducks have developed a pattern of flying off somewhere early in the morning and not returning till later in the day, with "later" becoming later and later.

I can normally cash in on a few ducks early, but not yesterday, screwed up my only chance at mallards on a jump-shot, then nothing was flying. Got to the cove I've been hunting recently, put out a few decoys, and waited. Cove is about 200 X 200 yards with not much cover, main lake off to my west side. But the south shoreline is steeper, and I've made a "blind" by mostly hiding in the shadow of a large rock about 10 yards uphill from the shore. It's also about 15 feet higher than the water level, so it's kind of neat being able to sometimes look down on ducks decoying. Made it a better hide by digging down into the sand a foot, and creating a tumbleweed wall in front, hunting in the desert is different! But hours went by with nothing flying, not even a teal.

About 10:30 I saw a lone canvasback drake swim into a group of redheads, gadwalls, and widgeon, about 1/2 mile out into the lake. Eventually 3 redheads and the canvasback swam apart from the rest of the group and I thought I'd try a boat sneak; it's been several years since I shot a canvasback and I wanted that duck. Looks like it's going to be at least another year, because I didn't get within 100 yards before they took wing. As long as I was out there, I figured I'd paddle around the lake looking for more targets. Passed up some teal against the shoreline, and thought I was in range of another group of redheads but got nothing when they took off. Later, back at the blind a pair of Mexican ducks lit in the grass on the north shoreline of the cove. Thought I had enough cover for a boat sneak, but they took off at 60+ yards and I stupidly fired a shot in frustration.

So 0 for 3, not a good start. Just hoping the afternoon pattern would develop. And it eventually did. About 1 PM a few teal started buzzing me, but I was going to hold out for mallards at least for a few more hours. Finally, about 2 PM a mallard flew over a bit high but it's a shot I can normally make. Looked like I hit him but he kept flying, a few curse words echoed across the cove. But I kept my eye on him, he started sputtering a bit and lit out in the lake 1/4 mile away. Watched him with binoculars for a while, he wasn't dead but didn't move any either. Waited about 30 minutes, then paddled up and finished him off. Thought he might be well enough to fly off before I got in range, but he didn't. So Whoo-hoo, cha-ching, finally got a duck!

Then things started to pick up, teal really started bombing me and some bigger ducks (mostly gadwalls and a few mallards) started showing up. But most of the big ducks started keying on the north (opposite) shoreline. I figured a few would eventually fly down my shoreline like they did on previous hunts, but I was starting to lose patience. After a few more veered off just out of range I decided to go sit in my duck boat in some grass just off the south shoreline, which got me closer to the flight line, I'm now 30-40 yards west and a bit north from my original spot. So naturally the next pair of mallards circled around to the east, turned west and flew right over my rock "blind"! This was off to my right side, which is a tough shot sitting in the boat (if you're right-handed), but I managed to kill the drake on the 3rd shot, after he flared over in my direction. Thinking that might happen again I turned the boat about 45 degrees towards the rock, and sure enough a single drake did the same thing and I got him. So now only one more mallard to go, I'm thinking maybe I should just go sit back at the rock when a redhead swung out in front of me and I shot him. So after the redhead I decided to stay put for a bit in the boat. Then after a little lull a single pintail drake circled and flew right over the rock, DOH! Looked like I hit him good, but he recovered and flew off aways, then died mid-air and crashed into the lake 200 yards away. So my shooting was a bit off yesterday, but as they say dead is dead! That was the only pintail I had in range all day (not counting the ones I paddled up on going back at sunset). So one more duck/mallard needed, after retrieving the pintail I got back to the shoreline and was waffling on staying in the boat vs going back to the rock. Pair of mallards sailed over my left shoulder going east and went straight to the decoys in front of me, finished out a great limit and got my mallard quota for the year. Was able to paddle back to the truck before it got dark, flushed 100's, maybe a 1000 ducks on the way. Long tough day, good finish!

Home today (Sunday), season closes Monday, will probably go to the river (which is a much easier hunt) and just hope to shoot a duck or two for my dog to retrieve, she can't go to the "pintail" spot when I hunt out of my little duck boat. I'll try to remedy that next year if the conditions are the same at the "pintail" spot, but they will probably be different. Last year she was able to go with me there because I had a spot I walked into, most days. 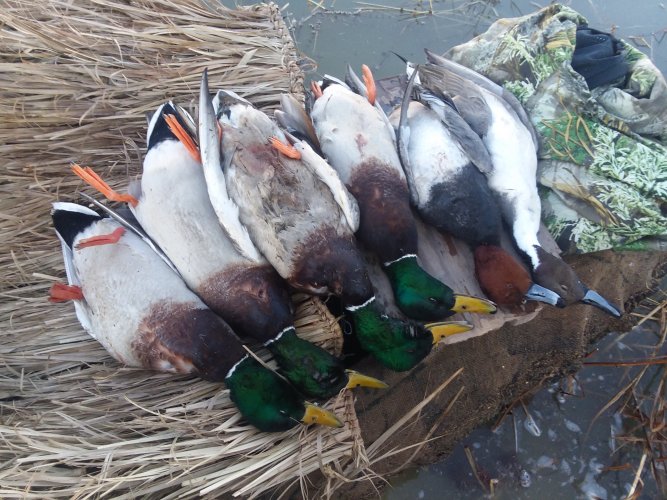 Well done again sir. You always seem to get on those pretty ducks in NM, I'm missing out!

seeth07 said:
Well done again sir. You always seem to get on those pretty ducks in NM, I'm missing out!
Click to expand...

Well, I didn't post the photo of the ratty looking spoonbill I shot 2 weeks ago, you only get the good stuff!

Great looking group of ducks. We all have days when our shooting isn't perfect and the ducks zig when we zag. Way to stay with it!

Damn fine limit right there. Congrats on reaching the personal goal. I like your style.
S

I'll take that limit any day of the week!
Pretty birds
M

Great ducks! Good hunting.
You must log in or register to reply here.

Oh, what a beautiful mornin'

Its in the books.