My trip has come and gone, and I have finally found some time to write about it.
I stayed with Nick Blanco at Driftwood Wilderness Lodge in Larsen Bay

I landed on kodiak after two days of flying. While in the shuttle to the hotel, I saw the the one and only bear of my trip on the side of the road. I realized I had left my neck gaiter and water bottle at home, so I stopped by Big Rays to buy some, I also picked up another base layer for my legs.

Day one:
Took off the following day for a quick flight to Larsen Bay. I met my hunting partner on the flight up. 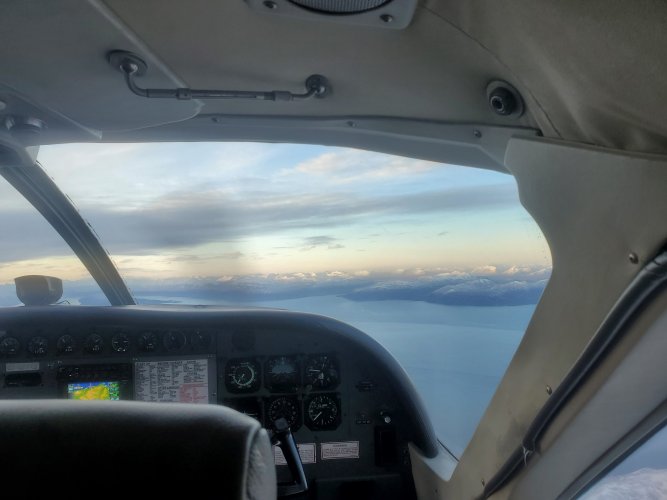 We checked our zeros and headed out for the rest of the day. It took us an hour and 30 minutes to get out of the brush. We saw a doe at 70 yards on our way to a glassing spot 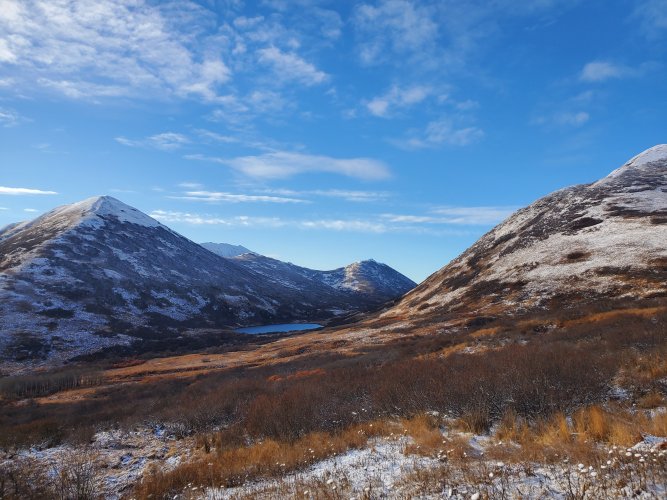 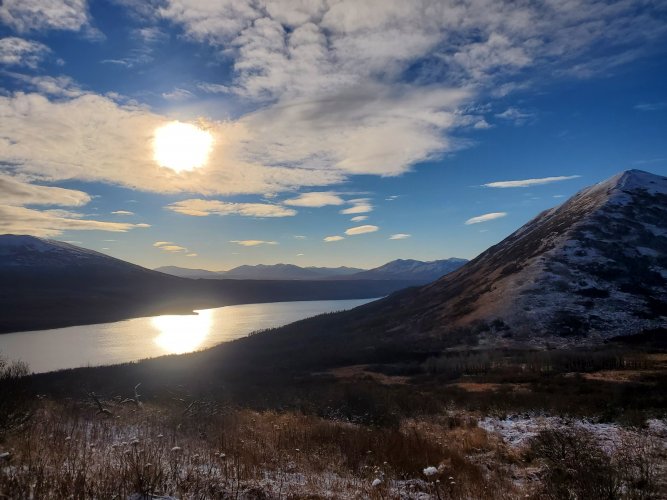 We sat for a few hours and saw nothing. About 20 minutes before we left, we let out a fawn call and a doe popped out of the grass at 50 yards. They can just dissappear in that stuff. We found an easier way down and headed back in for the night. 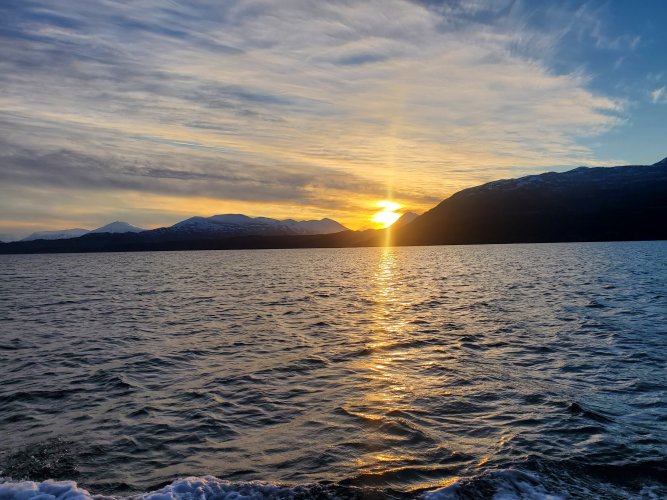 Day 2:
We were dropped off where a stream ran into ocean with a few options on where to go. Spent about 30 minutes going in one direction before deciding it was too thick. We scooted along a log with bags on our feet to cross the stream. It was still super thick on this side, but it was doable. It took a while, but we finally got to a glassing spot. Had lunch and used the call again, brought a doe within 8 yards. We moved to the other side of the mountain to glass again. Saw 3 does and a smaller buck, we watched for 30 minutes before spotting a nice fork horn buck. We left our packs and moved closer to 630 yards, partner missed 2 shots high with his 6.5 creed. We moved up to 490 and hit high. Deer didnt move until the last shot, and the rest of his ammo was in his pack. The sun was going down and then the hill was alive with does. We found an easy hike back to the beach and were picked up.
Later he looked and discovered he had the wrong weight bullet in his calculator 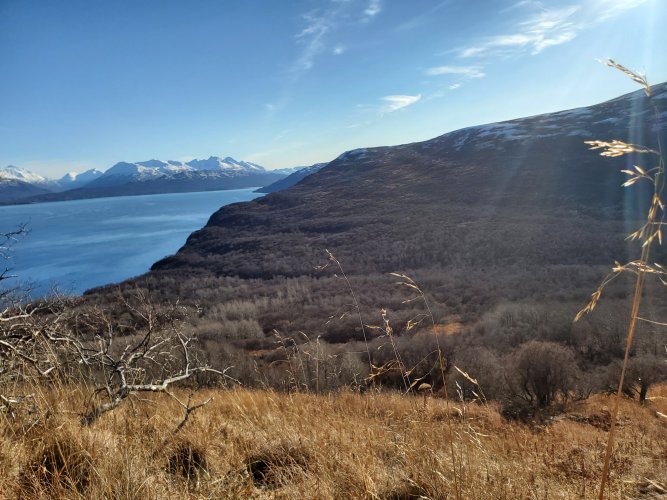 Day 3:
This was definitely the hardest day of the trip. We tried to get on to the hill where the buck was, and found a small spot in the cliffs that was somewhat climbable. 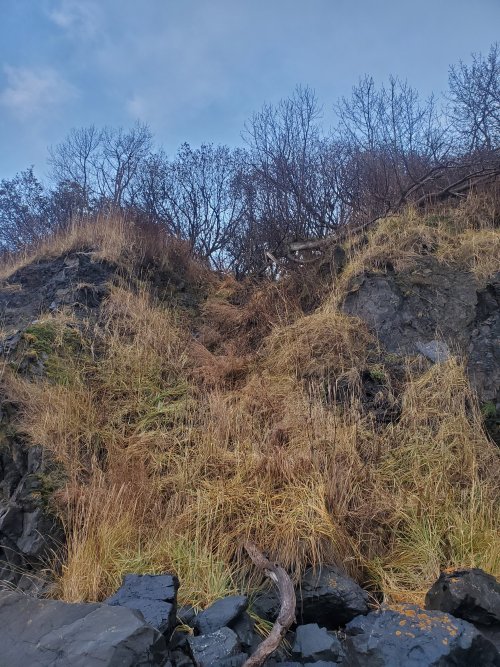 Over an hour of pushing through wet and slippery thorns, climbing a super steep hill. As soon as we got to the top and sat down to eat, it started to drizzle and the wind picked up. We climbed 1000+ feet in under 1.5 miles 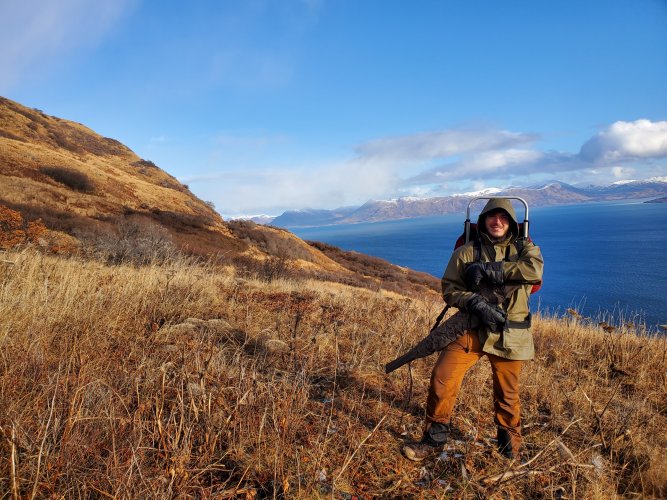 The wind started howling and it started lightly snowing so we hunkered down and glassed. There was no movement at all. We then moved down to a different spot and sat there for as long as we could until it got too cold for us. We crossed through the drainage back on to the hill we shot from yesterday soaking out boots and pants in the process. We then saw some large bear tracks that weren't in the area the day before. The tracks alone didnt scare me, but the small bear tracks following did. We followed our old trail and made excellent time back to pickup. 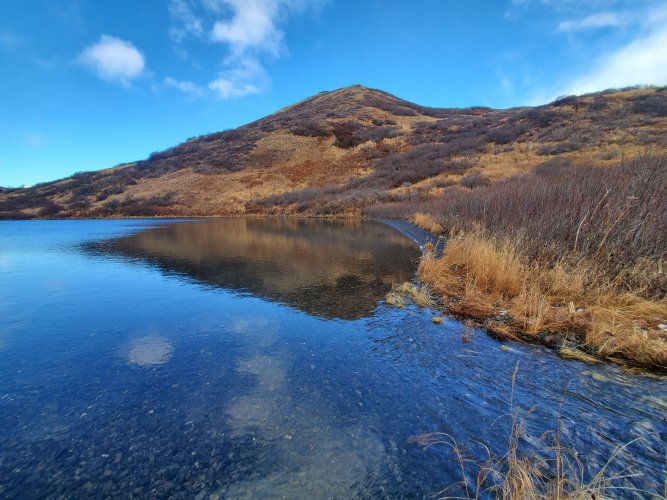 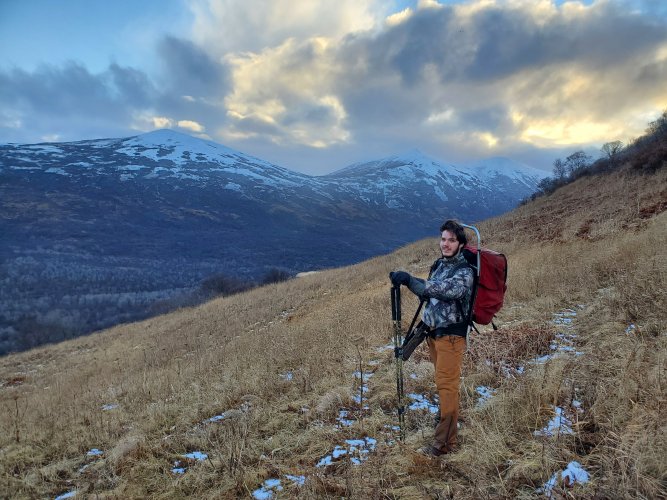 Day 4:
Because the looked overcast and to give our legs a rest, we decided to go fishing. The day turned out very sunny and we wished we had gone hunting, but there were a lot of cod so I cannot really complain 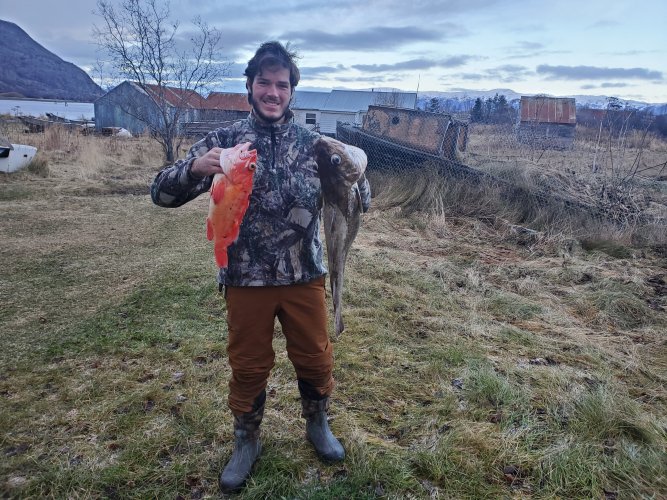 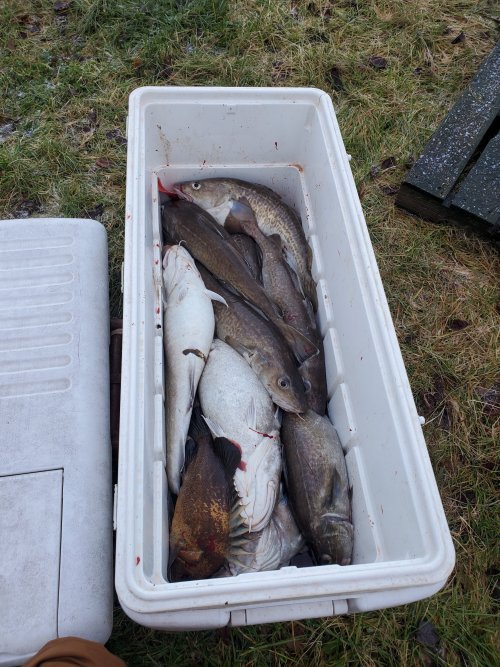 Day 5:
This was my partners last full day in Larsen. We left early to get into the spot we sat on the first day, but two other hunters had gotten there about 15-20 minutes before us. Nick dropped us off on a trail that leads to cabins he has, and it immediately started snowing hard. We sat in an open clearing for a bit calling for foxes before deciding to go to the cabins to dry out. 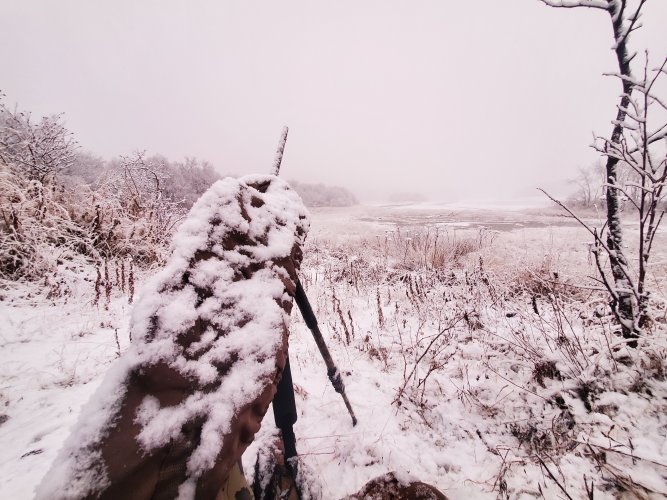 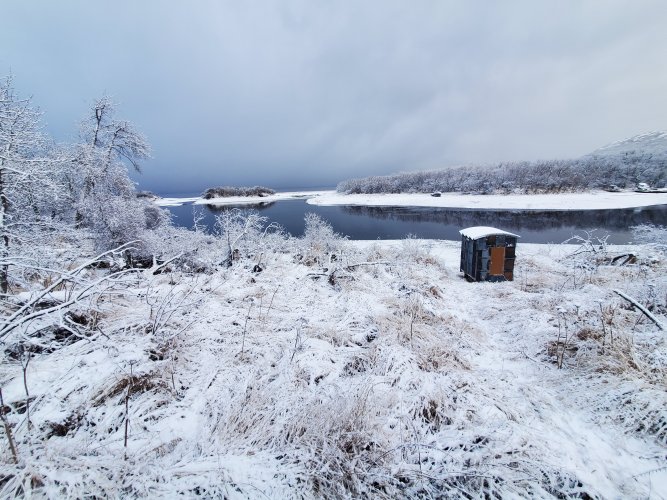 We put together a plan to hike up beach and hike up what appeared to be a clear patch, but like everywhere on kodiak, it was much steeper than it appeared on the map. We turned around to head back to the cabins but we had been cut off by the tide. I gave nick a text on the inreach and he dropped us off at another spot.
By this time, we were moving way faster over the terrain and got pretty far in 30 minutes. Hiking down into a creek bottom, I saw a tail running away along the opposite ridge. I set up my bipod and we let out a fawn call. A doe came running in and stopped about 40 feet away. I waited to see if any bucks were following, and when nothing came after, I took a shot. Dropped on the spot, just barely clipped the shoulder. Looking back, I probably should have gone for the head to save meat. We quartered the deer and left it in snow to go glass some more. Only saw does and it was getting close to sundown, so we packed up and returned to the boat. 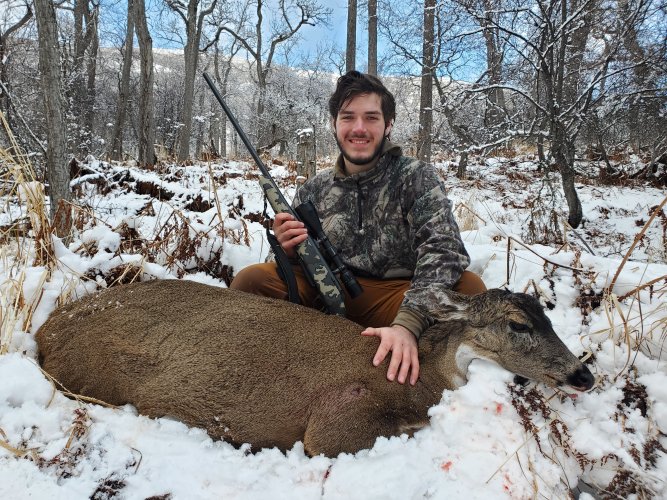 Day 6:
We went fishing for half of the day, started off slow, then we got on some cod. 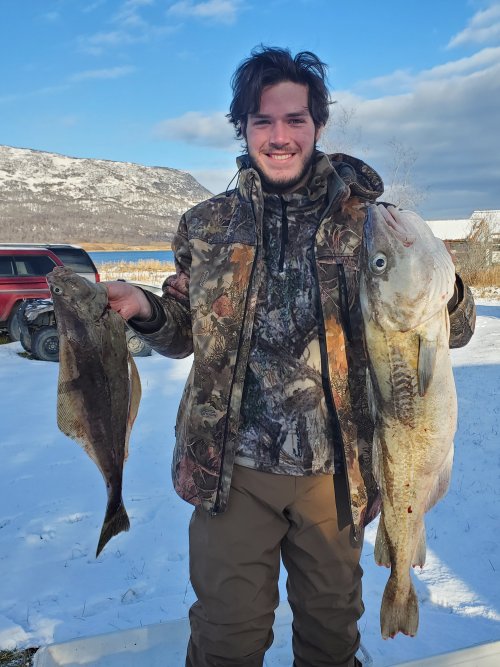 That night, I walked out on a fox, but let it walk because we were in town at night. 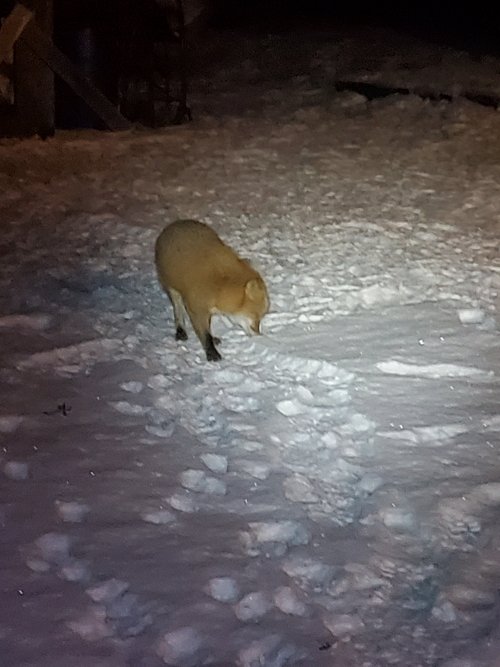 Day 7:
I went along for one last boat ride around island before heading back to the runway to leave for kodiak city 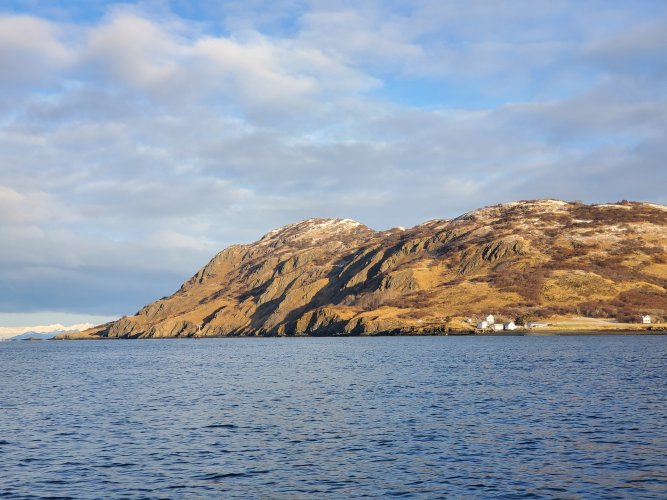 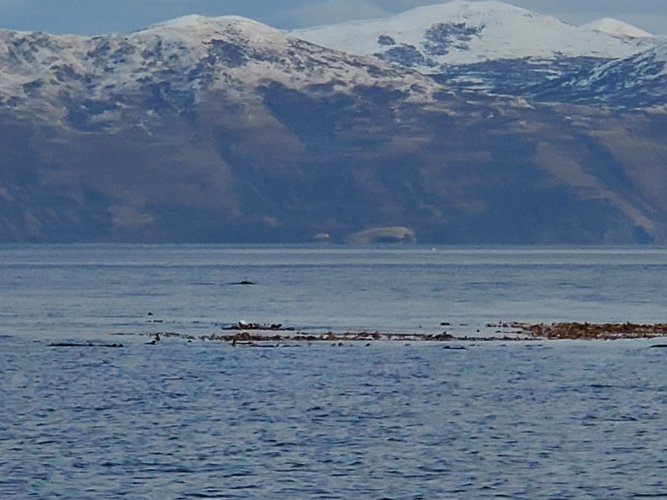 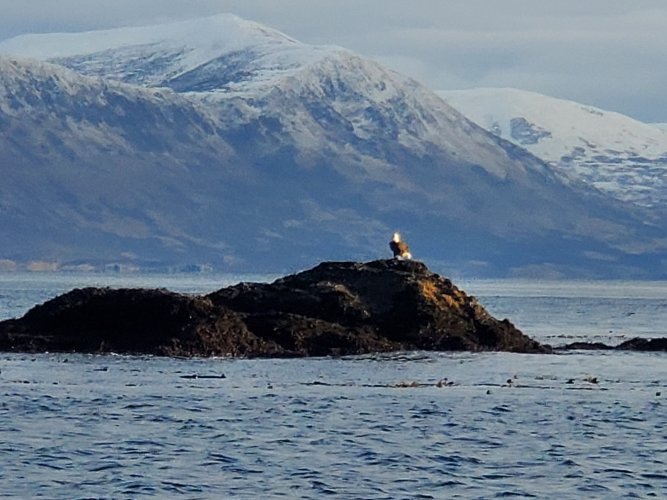 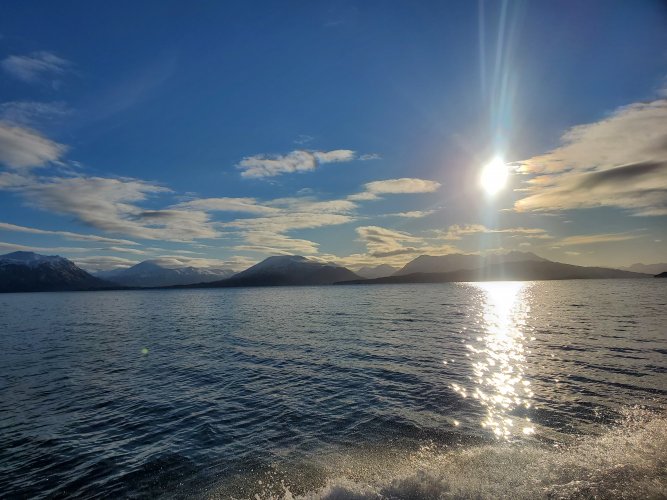 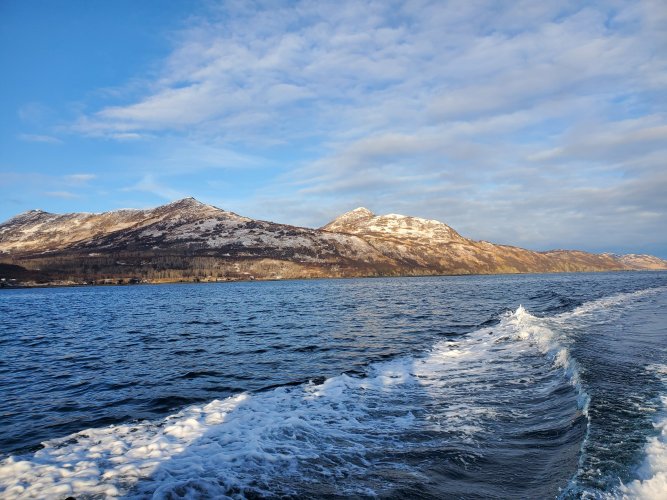 I had an awesome time on kodiak, and thats all thanks to both Nick and Max at Driftwood Wilderness Lodge. Max was an excellent cook and great to talk with. I reccomend them if you want good food, company, and transport service.

Cod are under rated. Congrats on an awesome adventure!

Kodiak is an amazing place.
G

That looks like an amazing trip that will provide lots of good meals and memories!

The Sitka deer is a awesome looking animal , congrats on your trip
A

Sounds like you had a great time. Congratulations. The Sitka deer that I have hunted, on islands out of Whittier, look almost grey in color. And in the fog are hard to see. And it seems like it's up or down terrain. But absolutely beautiful.
I've never been able to hunt Kodiak. Yet. But was on a forest fire their for a couple weeks.
R

Akcabin said:
Sounds like you had a great time. Congratulations. The Sitka deer that I have hunted, on islands out of Whittier, look almost grey in color. And in the fog are hard to see. And it seems like it's up or down terrain. But absolutely beautiful.
I've never been able to hunt Kodiak. Yet. But was on a forest fire their for a couple weeks.
Click to expand...

They blend in so well! Sometimes we would lose them while staring at them

Great pictures! Except for the snow, they look like my hunt there a couple of years ago. Several of the mountains and the lake look very familiar. Thanks for posting.
You must log in or register to reply here.