Cool pics Russ. How much water do those buckets carry?
B

All these fire pictures kind of make we want to fight fire again...sort of. I have some great memories of fighting fires.

The 212 bells usually had a 300 or so gallon payload, if my crappy memory serves me right.

The vertals I think were 750-1000 gallons if I remember right. I saw them used on a fire on the North Rim of the grand canyon in 89, they were lifting water from the Colorado River to the rim. They could make two water drops and had to refuel. Thats a long way to lift water in hot, thin air.
B

Elkchsr, heres a couple pics of the ship I worked with on a heli-tack crew...three-whisky-fox: 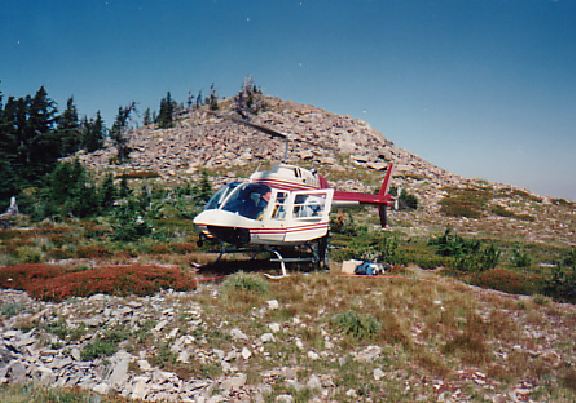 This picture was taken on Eagle Peak on the Superior Ranger district West of Missoula on the MT/ID Border.

Of all the fire pictures I took, I like this one the best, for several reasons. The guy in the picture is an old fire fighter named Bill Ross, and at the time of the picture was in his late 50's. A tough old bird for sure. 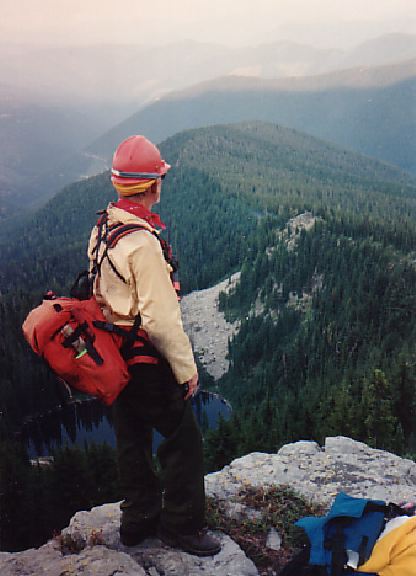 If you look close you can see the fire on the ridgeline just above the rockslide. All you can see is the smoke, it looks blue.

Another interesting thing about this fire...in 1986 I bow hunted elk on the very ridge the fire was on. At the base of Eagle peak, while bowhunting, I found an old mine site. I found an old grinding wheel with a wooden square peg in the center. I also found an old laundry iron that you set on a woodstove. I stashed those two items while I was bowhunting and thought I'd pick them up another time. I had forgotten all about them until, in 1994, I overheard a dispatch call for a fire on eagle peak. I was at the top of the fire list and Bill and I got the fire. After we put the fire out, on our hike to the helispot, I found where I had stashed the iron and the grinding wheel 8 years earlier. I put them in my PG bag and got them out the easy way.
E

Great story and pics Buzz...Thanks for sharing...
I don't remember what the biggest boy's can carry in water, but we had bucket that would hold some 15-1800 gallons of water in one haul. They were only picking up 1200 gallons and letting it go on a very steep hillside that we were working up in Glacier this last year. I'll tell you what, the hillside looked as if a river torrent had hit it and would make pretty good gully washers on the hillside where they had let that much water go. I for one wouldn't want to be under it when it was dumped, I think you would be washed down the hill... When you see the water being dumped, it doesn't look like there is really that much coming out, but the evidence is to the contrary when you hike back down to it...

Nice pictures Buzz and thank both of you for the water information. Still have those artifacts Buzz? I bet the hils inthe west are loaded with old trinkets if one knows where to look. There are lots of old mines around here, but too close to roads and easy access, so I wouldn't think anything would be left.
E

I have an old ore melting pot that I have sitting on my GPS that I still have to go get, that sucker is going to be a heavy one....

I have also found an old log skidder that is pretty much all wood, I want to see if I can get that one out also, but have to see if it can wait until I get a new peice of ground that is larger than this one...

Yea, Buzz, you still have your treasuers...

Found an old tie hackers cabin, or what was left to it, last year. Looked all around, and even did a little digging, but couldn't find a thing.
E

I want to get a metal detector, I think I can take that around some of these sites and find all sorts of treasures...