I don't have much yet, as I did not attend the meeting in Grand Junction and the audio is not yet available, but one topic I've heard discussed is Commissioner Bray indicated he would support moving the archery season to a fixed September 1-30.

I do not know the reasons presented at the meeting, but here's my personal initial thoughts.


I'm trying not to look at it from a selfish, personal aspect, but I feel I can't. I'd love to be convinced otherwise, but I don't see the benefit except for retired bowhunters, which is awkwardly the makeup of most archery organization leadership boards.
N

My major issue with that is that I like hunting deer in late August. Velvet hunts are awesome! From an elk standpoint though it would be cool to have more rut time to hunt.

HEre's a link to the meeting. I will be back with more thoughts after listening. 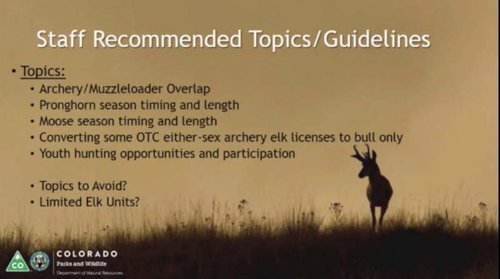 
Not sure I'll have time to listen to meetings, but I'll try.

Same discussion is going on over at bowsite too.

Commissioner Bray didn't really give any reasoning why he proposed the season change, but rather just "put it out for discussion." However, the only dissenting comment on the suggestion was that deer hunters would probably not support it.

The whole BGSS talk just got started and will go through spring of 2019, so plenty of time to form and present commentary.

vanish said:
Commissioner Bray didn't really give any reasoning why he proposed the season change, but rather just "put it out for discussion." However, the only dissenting comment on the suggestion was that deer hunters would probably not support it.

The whole BGSS talk just got started and will go through spring of 2019, so plenty of time to form and present commentary.
Click to expand...

Bray isn't real high on my respect list, I'm sure there is someone pushing this agenda through him...
P

I could be wrong, but I seem to remember the archery season dates being 9/1 to 9/30 about 15-20+ years ago. Anyone else remember those days? Maybe I’m thinks of another state.

At the recent commission meeting, there were several public comments about investigating whether its time to move elk to draw only.

Keep in mind these are just public comments, but the commission did recognize the increased pressure especially during archery seasons.

I've got to listen to the meetings from last week, but I can't see CPW putting that cow back in the barn.

Informational flyer in the scope of the BGSS:

Scan of the Archery Survey

I haven't been doing a great job of keeping up to date on this. Many of the meetings have not been broadcast and have been in-person only. One of the new things being investigated is moving the Leftover Draw to a Secondary Draw where everyone can participate, and the first "round" of Re-Issued licenses would be available.

For all the guys in the Springs(I plan on attending):

COLORADO SPRINGS, Colo. – The election season isn’t quite over. There will be another important election Nov. 28 when Colorado Parks and Wildlife (CPW) convenes a Southeast Region Sportsmen’s Caucus in Colorado Springs.

Those delegates will have an active voice in how CPW manages wildlife in Colorado and represent the Southeast Region in statewide debates on CPW policies, regulations and resource management decisions.

The caucus will convene in the Hunter Education classroom located at the rear of the CPW Southeast Regional office at 4255 Sinton Road, Colorado Springs. It begins at 6 p.m. and will end by 8 p.m.

Besides electing two delegates, CPW staff will discuss the impact of chronic wasting disease on Colorado’s mule deer population and the agency’s efforts to combat the deadly neurological disease. CPW staff also will provide an update on the hunting issues including the 5-year season structure.

But the election will be the major item on the agenda.

“The election of delegates is important because of the key role they play carrying the message of Southeast Region sportsmen and women to the statewide Sportsmen’s Roundtable.,” said Dan Prenzlow, manager of CPW’s Southeast Region. “We value our delegates and look for passionate outdoor enthusiasts to fill those positions.”

For the past two years, the Southeast Region delegates to the Statewide Sportsmen’s Roundtable were Willie Kalaskie and the late Dave Roudebush.

What: Regular meeting and election