Big game hunting into your 80's

I was looking through my hunting pics and ran across a bunch of my Grandfather. I was lucky to hunt with him alot when he was still kicking. I usually hunted with him until he had his deer and elk (whenever he drew a cow tag).

It was a challenge to get him where he needed to be sometimes, but he always managed to get there.

These first pictures are of a calf he killed out of a herd of 30 or so on opening day one year. I'd put the herd to bed the night before opening day. We worked our way up a steep ridge well before light. It took quite a while for us to get there, as Grandpa was 79 at the time. We got up where we needed to be about 1/2 hour before legal light. Right at legal light I spotted the herd feeding below us in scattered timber. The herd was scattered about 130 yards below us. I pointed them out and he said he told me to find a calf. I picked one out and he said, "OK, I'll get that one." He rests his model 70 winchester on a stump and shortly theres a pleasant "roar" and down goes the calf with his trademark shot through the neck. The herd scatters and runs down the ridge a ways wondering whats going on. I used the same stump for a rest and killed a spike out of the herd. Heres the pics. 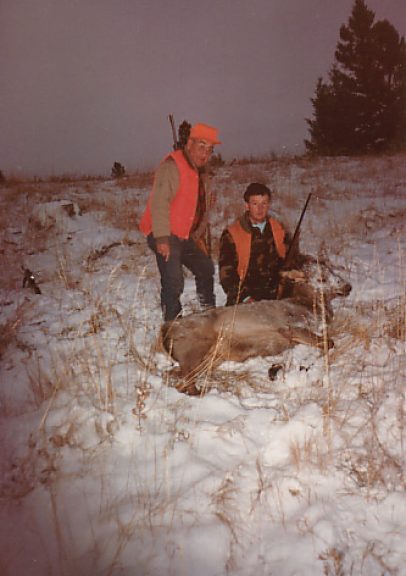 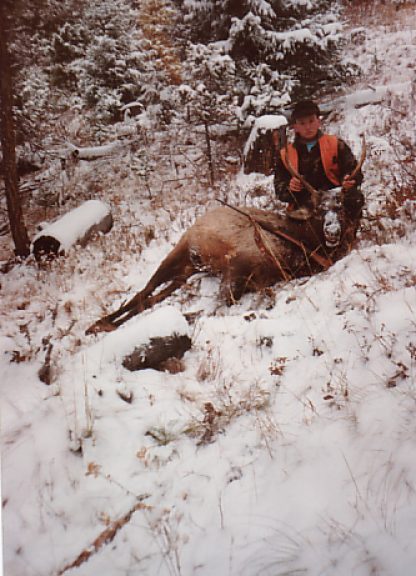 A couple years later, at 81, after already filling his deer "b" tag on a whitetail doe earlier in the day, we decided to walk an old road we knew about. I'd already arrowed a bull that year and I was thoroughly enjoying myself helping Grandpa fill his cow tag. Sure enough right at dark I spot a cow and a calf standing across a steep draw. Grandpa was having a heck of time picking them out in the timber but finally he says, "oh yeah, I see it now." He calmly shoulders his 300 mag. and shoots. I see the cow staggering down hill, obviously about to croak. He says, "I couldnt hold steady, I had to shoot it behind the shoulder." I hiked across the draw, found it dead and sure enough, nice silver dollar sized exit hole right behind the front shoulder. An off hand 150 yard shot is doing pretty good, especially at 81. Heres the picture. That was the last elk my Grandfather killed. 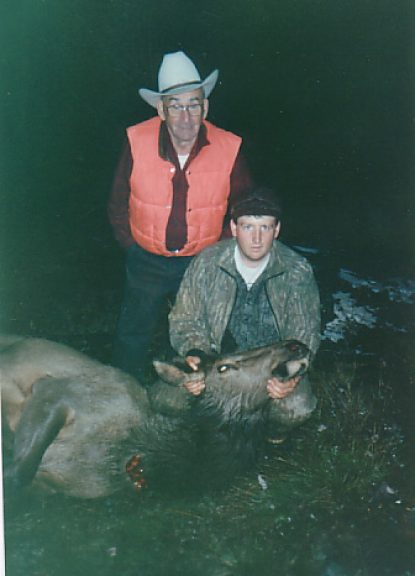 Heres the last whitetail buck he killed a couple years later. We were once again walking up an old road and this buck trots by us at about 70 yards. It makes the mistake of stopping and one shot to the neck with the 300 and that was it. I'll never forget any of the hunts I did with my Grandpa...and I'm happy I did as much hunting with him as he wanted to do. 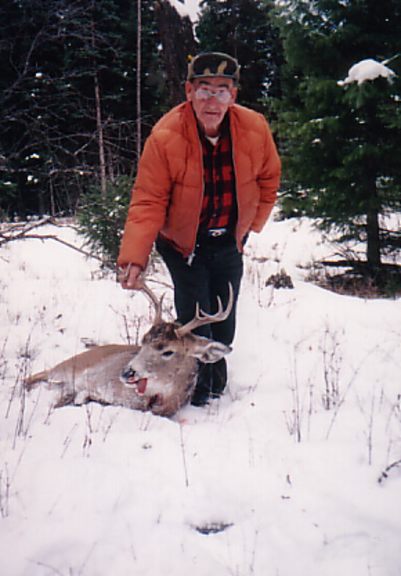 Thanks for sharing with us Buzz.

This is why I come to the hunting boards

Great pictures and great story. I never got to hunt with my grandpa, and I still kick myself and my parents for letting his big Mule Deer rack sell with the ranch. It was a big buck killed down in Utah. I do have a faded B&W picture, that is pretty important to me.

In the end, we hunt mainly for the memories and the pictures, and you are lucky enough to have both with your grandpa. Yeah, his feats of off-hand shooting are impressive, but more impressive is that he had grandkids who wanted to hunt with him. That is far more noble than the feats of marksmanship.

(Too bad your Grandpa didn't teach his Grandson to smile for the pictures. Hunting is FUN, damnit, smile next time.

I didn't come from a family of hunters, so I really enjoyed the stories. My Dad did take us camping, hiking, fishing and taught us to shoot, and I treasure those memories. My grandfather was a person who did very little, actually, for recreation. He simply liked to work, and the harder physically, the better. He did so right up until he died. One time for his 77th birthday, we showed up at his house and he was outside with a sledgehammer, breaking up his driveway so it could be re-poured.

Thanks for sharing the stories and pictures with us, Buzz.

Thanks for the pics and the great stories. They bring back great memories of hunting and fishing adventures I shared with my Grandfather. Can't think of a better way for a young kid to spend time then in the outdoors with their Grandparents.
D

Thats pretty cool about your grandpa hunting at that age.... Something for you to be very proud of.
Delw
K

Buzz thanks for sharing the stories and the pics.
Those are my best memories,hunting with my grandpa.
M

my grandfather doesn't hunt so i am envious of you, my father also doesn't hunt off of the road so it is sad to not be able to hunt with family and get animals for more than myself. i just wish that one of these times my mother will get the shot instead of me
A

Good stuff Buzz, thanks for sharing.

Thanks for sharing!
C

treehugger - you don't get to hunt with family? Moosie won't hunt with you? Bad uncle!
M

Moosie doesn't count he isn't blood he married into this family and fits right in with my brother and I and my uncle ross, much to the dismay of my sister, i think she thinks he is a bigger smart ass now because of us
E

Thanks for the pics Buzz and the stories above are really great.

Say it aint so!

A
Teaching our grandson to hunt

B
Tips For Judging Size Of Lone Cows