So I purchased this rifle new a few years back. Just liked the looks of it and bought it and had a 3-0x50 Zeiss Conquest mounted on it. I took it to the range and sighted it in, shot 4 deer with it and I put it away in the safe never to be touched again, I, like May others have several rifles and I actually prefer my 7mm-08 for deer hunting. 2 years ago when my girlfriend (now wife) wanted to kill a deer I told her that I had the perfect rifle for her and showed her the rifle and she loved it. She is somewhat uneasy around guns, never really shot much. So I thought it would be best for her not to shoot the gun UNTIL she actually squeezed the trigger on a deer. So I showed her the ins and outs of the rifle and went over gun safety a few times, she practiced aiming and dry-firing several times and she was ready to hunt. I took her hunting with me and she killed a doe and was so excited, she never felt the recoil from the rifle. Then the next trip she killed another doe. She was a deer killing machine and she loved her rifle. 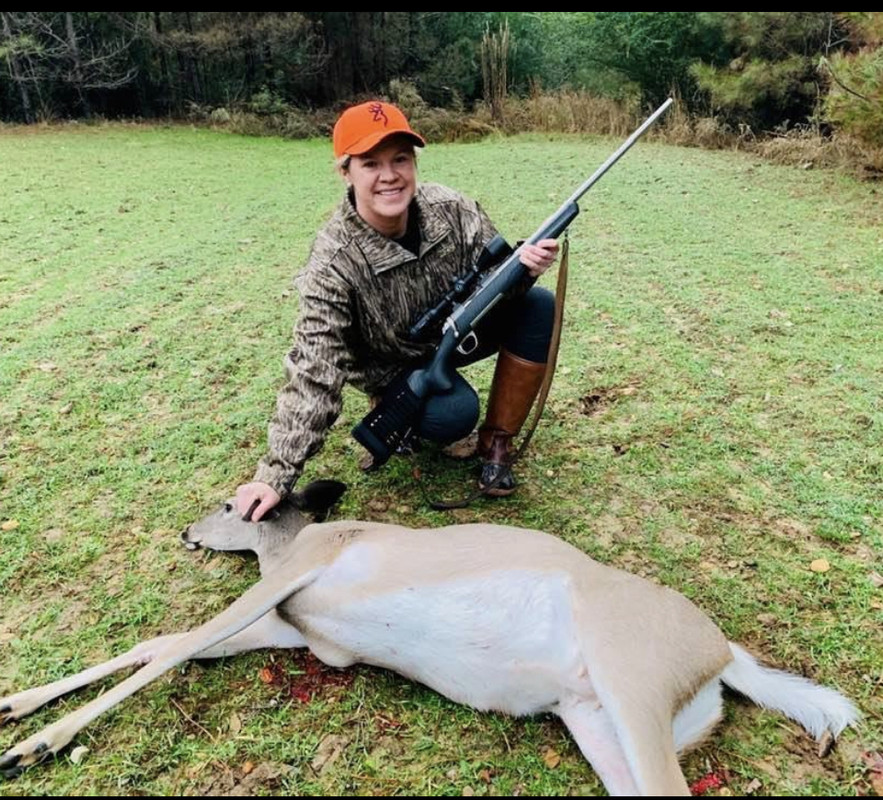 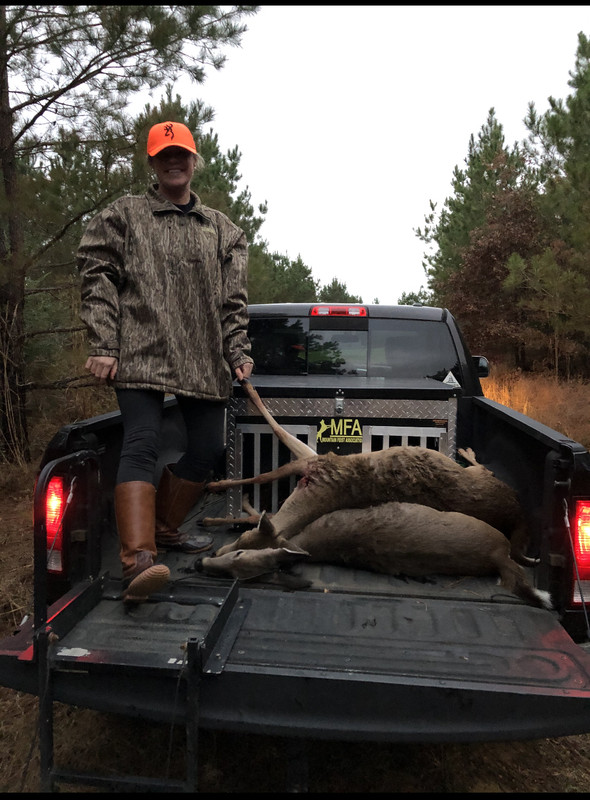 The Nightmare Hunt:
So the day comes when the wind is right the time is right and I was taking her on her first hunt where she would be hopefully take her first deer sitting by herself. I had planned on her sitting with me in a shooting house but her 11 y.o. niece was staying the weekend with us so I decided to let them sit together in a shooting house and I would sit in another one about 1/2 mile away. After all, Kasey my wife, was now an experienced hunter and was insisting on killing a buck.
I take them to the stand and get them situated, go over gun safety once again, remind them of the do’s and don’t’s, wish them luck and I head off to my stand. I start getting texts from them almost immediately letting me know that they have already seen a buck chasing a doe but “it wouldn’t stand still for her to shoot it”. The entire afternoon was narrated by text messages from Emma, the 11 y.o.
So, about 10 minutes from dark-thirty, I get a text “buck in the field Kasey is about to shoot it.” So I listening and anticipating the shot…BOOM. Then my phone starts buzzing, Emma is calling I answer the phone anticipating celebratory girly sounds but instead I can hear Kasey crying and Emma saying “aunt Kasey is bleeding really bad, we need you to hurry over here!” I was shocked and said “where is she bleeding?” Emma says “her nose”.
So I hurry over to their shooting house and Kasey is still crying, Emma is scared and there’s a dead buck in the field, a small 5 point.
Anyhow, it turns out that my wife, who is right-handed is left eye dominant. In the excitement of shooting her first buck she closes her right eye and shoots with her left eye, while shooting right-handed! When the rifle recoiled, the scope hit the bridge of her nose and gave her a big goose egg and the blood began to pour. At 34 years of age she had never had a nosebleed and it scared her to death, lol. She is a photo freak, always taking photos, ALWAYS, however, she refused to let me take a photo of her with her buck, due to the nosebleed and bruised eye and nose.

Selfie she sent me right after I left her in the shooting house on her hunt. 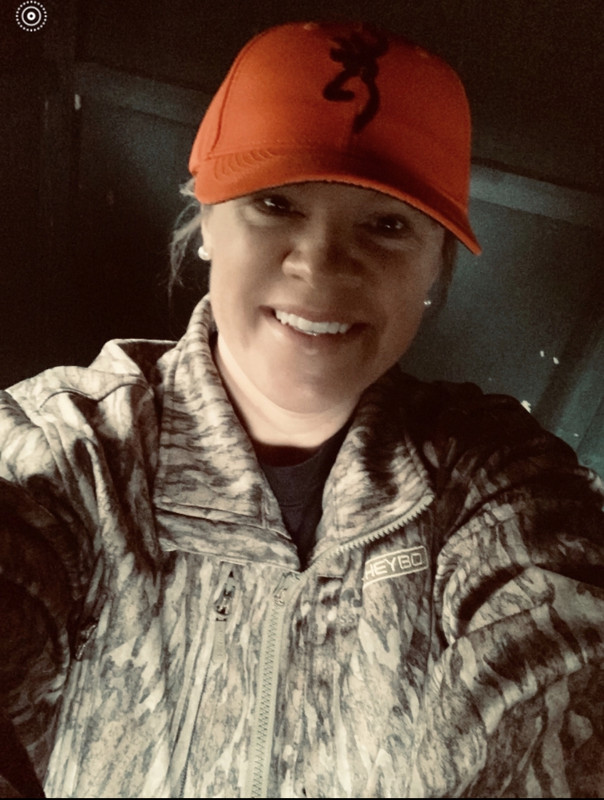 The rifle now:
So it’s been in the safe, not being used, Kasey said “I never want to see that rifle again!” So I have since given her a sweet Model Seven 7mm-08 and all is good again. So here is a really nice .308 just sitting there not being used. A couple of days ago a friend of mine mentioned that another friend was searching for a .308 for a Christmas present and was really having trouble finding one so I said “I’ve got a nice .308 I could sell her.” I was unsure of a price, and he wasn’t sure that the wanted to spend the kind of money that my rifle was worth. Anyway, I dug it out and wiped off the dried blood, yes it still had blood on it from Kasey’s nose! So, after wiping it down, and shouldering it a few times, I took it to the range and shot it some. After the range trip I have decided that I just can’t get rid of the .308. I’m going to order some Barnes TTSX 130’s and possibly some Hammer bullets and work on a new hunting round. Just can’t part with it, especially with the memories that have been made with it. 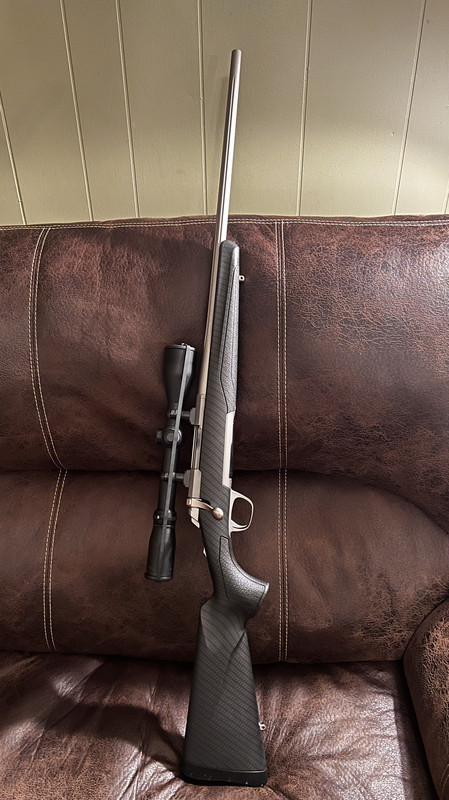 good move. Unless you really, really need the money, I wouldn't part with it.

Unwritten but often spoke of rule in my family is never sell a gun! That's a good looking rifle to boot!

That being said, I want to sell my current shotgun and get a left handed shotgun.

I have the exact same rifle in a 300 win mag and it’s a shooter.

Damn man! I almost had a heart attack reading that. Glad she’s okay, the buck was bagged and the rifle was kept.
G

She needs to learn to shoot left handed. Unless there is a medical reason, anything else is silly. I'm right handed, all my bolts are rh. I shoot left without issues. Only my AR's are LH. JMO Good on her to hunt. More than a few of us have battle scars from improper holds.

Is there a shooter/hunter that doesn't have at least one scope scar on their nose?

Beautiful X Bolt. No way I’d sell it. Glad she was ok. I immediately thought of something much worse when reading your story.

Go look at the ammo shelves in any store. .308 is a good rifle to have right now!

Wildabeast said:
Go look at the ammo shelves in any store. .308 is a good rifle to have right now!
Click to expand...

That's the case in Baker City,Or. Plenty of .308 but no other hunting rifle ammo.
L

Earlier this year I bought a Winchester Model 70 Featherweight in .308. It's my only center fire rifle that's not a magnum. I was surprised at how mild the recoil is, and the amazing accuracy with Federal Non Typical 150 gr. factory ammo. Great little gun!

Good story and you obviously have a great wife. I would have insisted on a lot more training—-shooting before I would have declared her ready to hunt though. I’m not being critical. You did mention safety a few times and that’s great but I take new shooters shooting dozens of times and I take them hunting with me several times before turning them loose to hunt. Glad it was only the minor injury and she did get the buck!

seeth07 said:
Is there a shooter/hunter that doesn't have at least one scope scar on their nose?
Click to expand...

After more than fifty years shooting I stayed clean till last fall at the range. I decided to shoot up some old reloads to reuse the brass. Those shells were loaded with Dad's funky old Herters powder measure. Gave up on its inconsistency a long time ago. Anyway, the third shell went KABOOM and whopping recoil sent my scope into eyebrow. Yeah, it drew blood but not bad. I wisely decided to pull the rest of those bullets! Duh!

My unwritten rule is “ I buy guns, not sell them”

It's a .308...sell it. That round isn't cool, it can only kill small framed animals at close range. It doesn't have a tactical name or at least an abbreviated name. Yea the round may be accurate and recoil light but it is sooo slow. It should really be used as a close range deer round at best but only in emergency situations. PM me if you want me to take it off your hands...it had caused you and your family enough anguish.
M

Ive also got that exact same rifle in a 308. Took a great bull with it this fall. Never took a step.
B

Honestly that scope looks set back really far and/or has poor eye relief spec. Perhaps investigate a different scope, a fixed lower power or low power variable and gain an inch or even two of eye relief and safety factor against future scope to face incidents.
L

Bullshot said:
Honestly that scope looks set back really far and/or has poor eye relief spec. Perhaps investigate a different scope, a fixed lower power or low power variable and gain an inch or even two of eye relief and safety factor against future scope to face incidents.
Click to expand...

Guys I ended up loading some 130 grain Barnes TTSX bullets for the .308 that are very accurate. I used it with this hand load to kill a decent 8 point on December 26th. 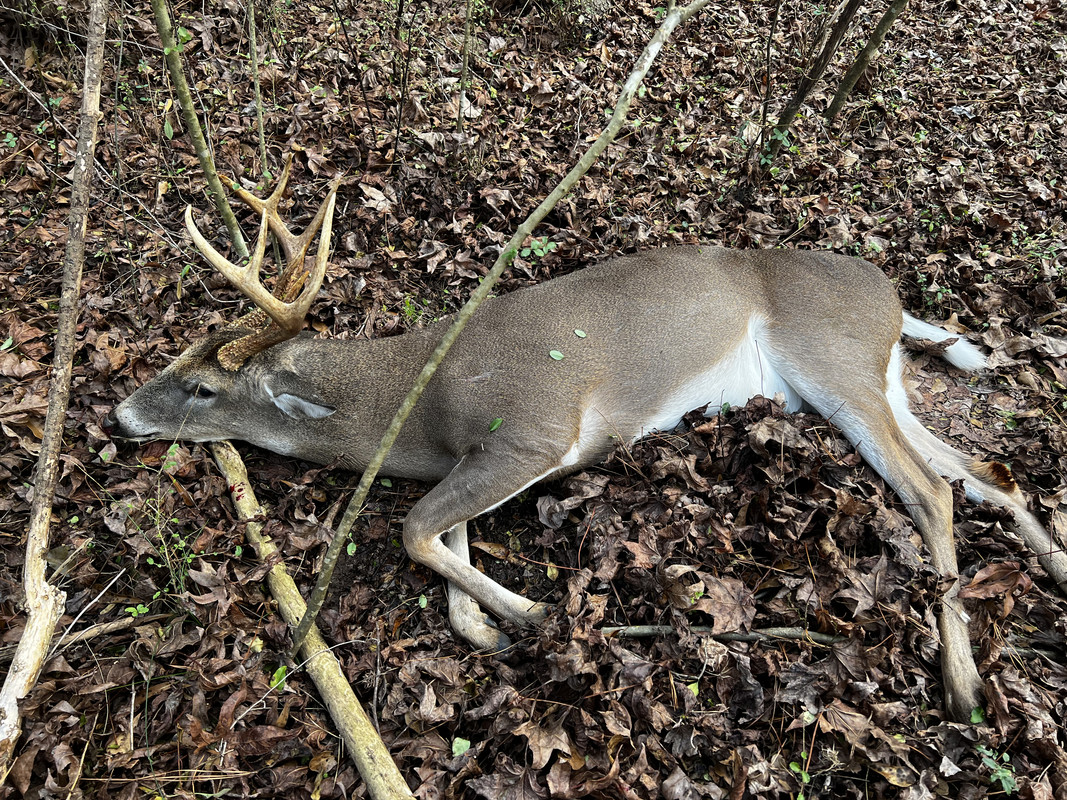 JustinsDad said:
Good story and you obviously have a great wife. I would have insisted on a lot more training—-shooting before I would have declared her ready to hunt though. I’m not being critical. You did mention safety a few times and that’s great but I take new shooters shooting dozens of times and I take them hunting with me several times before turning them loose to hunt. Glad it was only the minor injury and she did get the buck!
Click to expand...

You are correct. She actually hunted with me 6-7 times before I left her alone in the stand.
You must log in or register to reply here.

Well, it's not good. Not religious but prayers are welcomed.
7 8 9

Realization - My Mom is why I’m on Hunttalk

O
The Adoption Is Final!
2