Our newly updated Twist Rate Stability Calculator not only tells you what your SG is, but it also lets you know if you are reaching your optimized BC.

VikingsGuy said:
Somebody like @ImBillT or @brockel will need to confirm the spin/stable math, but in general, you are supposed to go down 10-15% in bullet weight when moving from lead to copper to account for longer per grain copper bullets and their zero loss of mass at impact. So, in general, if you would normally shoot a 165 grain lead bullet a 150 grain mono copper is spot on. FWIW - I shoot 150gn TTSX out of a WSM loaded hot and it is a tack driver that has taken 1,200 lb game in SA.
Click to expand...

For stability I just plug length and weight into a calculator and call it good enough.

I’m terms of reducing bullet mass because a mono won’t come apart, there are a LOT of flaws with that line of thinking, but flawed or not, whether or not you can use a lighter bullet is still complicated and very dependent on a lot of variables. First, just about all monos loose some mass on impact, and some are even designed, intentionally, to loose a substantial amount of mass. Second, there a fair number of lead cored bullets that will retain enough mass to be considered somewhat comparable to monos on that front. Third, when a bullet “looses “ mass, it’s lost INSIDE THE ANIMAL!!! Many manufacturers want you to believe that somehow that didn’t contribute to the animal’s death. The fact that some monos are designed to fragment is evidence that SOME manufacturers recognize that fragmentation isn’t always bad, and weight retention doesn’t tell the whole story. So, if you needed X grains of standard old soft point to reach an animals vitals, then yes, switching to a non-fragmenting mono would not require as heavy a bullet to reach said vitals. However, would the mono do equal damage? NO IT HAS LESS MASS!!!(of course we’re assuming same gun and each bullet is loaded to its maximum potential) In our over simplified model we got both bullets to the same depth, but I can absolutely guarantee that the lighter did less damage along the way. What if neither bullet exited, but we didn’t drop the mass of the mono so much that penetration was equal, and instead dropped it slightly, but kept it high enough to give us more penetration than the lead core? In that case, the lighter bullet did less damage, but it damaged things deeper inside the animal. That can be important. What if the mono weighs less than the lead core, or the same amount, but it exits and the lead core does not? Well in that case the mono did far less damage, it started with the same or less tissue damaging potential, and it used up so little than it ran through the animal and damaged the hillside. Keep in mind we’re not talking about increasing mass until we get an exit(which could increase tissue damage and still have potential left over after exiting), but instead we’re altering the design, so that the projectile expends less energy per inch of travel as it moves through the animal. We’re literally choosing to damage less tissue per inch of penetration in exchange for more total inches of penetration. If the animal is thick enough, this could yield equal tissue damage. It’s a balancing act, and the best balance depends on the animal, the shot angle, the impact velocity, and the shot placement. More mass yields more potential for damaging tissue. Tougher bullets put that tissue damage deeper(possibly too deep). My opinion is that the reason monos seem to perform best at very high velocities is that they are so stinking tough they need high velocity impact to fragment and do a higher percentage of their damage inside an animal. When you really need to increase penetration, and can’t or won’t do it by increasing mass and SD, then monos, or certain thick jacketed bonded core bullets are the way to go. When you really don’t need more penetration than a more conventional bullet design offers, but you want to use a mono, then high velocity, and perhaps one of the monos designed to fragment substantially is probably your best bet.

9 times out of 10, if you hit an animal in the chest with a bullet that is considered a hunting bullet, that is a weight that most consider adequate for that animal, at an impact velocity of 1800fps-3000fps you’re going to have a difficult time improving upon the results.
S

1) Monos are longer per given weight when compared to lead core bullets. Meaning that if you try to use the same weight bullet, the twist rate of the rifling in the barrel may not stabilize the mono bullet.

2) The lighter weight mono will have a faster velocity to help initialize expansion.
The solid copper won't open as readily as lead.

BradA said:
So I am going on a dall sheep hunt in 2022 and have been planning the hunt and am planning on taking my Christensen arms summit TI 28 nosler with me. I have 200 rounds of factory ammo ready for it to be broken in, sighted in and practice and get familiar with it over the course of the next 7-8 months. During a discussion with a friend about what load and rifle I’m going to shoot he thought I was stupid to be shooting nosler e-tip 150 grain copper bullets in Alaska on sheep and that they will get sent to fast out of a 28 nosler and be unstable, and suggested I use a heavier 160-180 grain lead bullet. This now has me concerned if I made a mistake with purchasing this ammo for this rifle, for this hunt. Maybe I’m just getting in my head about it because of the hunt and it being once in a lifetime for me but what do you guys suggest and what is your advice on this rifle, round and load? Should I use a lead bullet? Is a 150 grain bullet to lite of a grain bullet for a 28 nosler? My barrel is a 1-9 twist barrel. Does anyone have this same rifle, and shoot 150 grain? Does anyone shoot 150 grain out of there 28 nosler? What’s your experience?
Click to expand...

I'm little late. I did pull up Nosler data on 150gr E-Tip 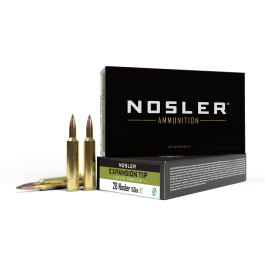 I don't think E-tip is too fast vs Nosler loading data @ high 3300fps and couple loads @ 3400fps. Your friends might be looking at that data.
You must log in or register to reply here.