2021-
This is the story of my buddy’s Idaho sheep hunt, we will call him A. We met over 30 years ago after I moved from Idaho to Utah. We’ve had some great times over the years and have even been on some sheep hunts together. A is a pretty lucky guy. He has drawn a statewide deer tag, an expo elk tag, and this year a Unit 27 rocky tag on the late hunt. As a NR that is really hard to do, like 1/2000+ odds. A is also a big time rafter and very generous with his time and equipment and including others on his adventures.

Some background: I’ve dreamed of experiencing the mountains of central Idaho for over 30 years, since I lived in eastern Idaho for a while. My wife’s parents are from Idaho and her Grandpa had a cabin on the Yankee Fork. Between family and friends, I heard tales of adventure in the White Clouds, the Big Horn Crags, and the Frank Church wilderness, but sadly I never had the time to explore the country there. After I met A, I got invited to do summer float trips on the Middle Fork with A and some guys from work, never could get away. Now days they can’t get permits.

Fast forward to 2013. My son was living in Idaho and drew a California Bighorn tag. He, his wife, and I were all there when he got a beautiful ram. The best looking animal I have ever seen killed. So the year after that, we started looking at Rocky Mountain Bighorn units. The search led to areas with familiar names: White Clouds, the Middle Fork, the Bighorn Crags, and ‘Frank Church’ wilderness. I discovered Hunt Talk and got information from some great posters here. I read some great threads, some real classics, such as T-Bone’s and Moosie’s adventures and mis-adventures. My dreaming of going on a sheep hunt in the Middle Fork country increased, but although many of the units had relatively good odds, success was not so good, and they were in extremely tough, rugged country. Depending on what my son has going, he has been alternating between the Rocky sheep draw and mountain goats, still hoping to draw.

So back to my pal A. He mainly chose unit 27 so he could have a float hunt on the Middle Fork. The 27 late hunt is a huge area and he elected to hunt the north portion, the lower river and invited 3 of us to go with. Me, JP, and L. So in later October, we flew two rafts and lots of gear, to an airstrip on the Middle Fork. These guys knew the river well, having done it many times years ago in high water, but never in low water. 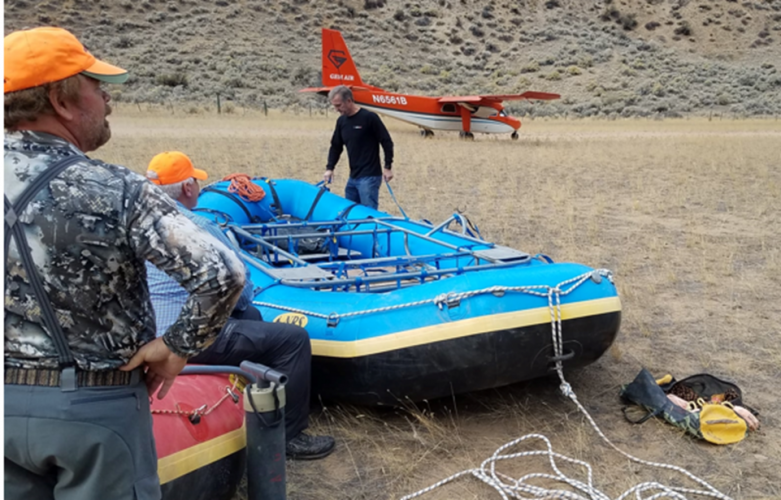 The hunt.
The weather started out great, warm and nice. Floating the river is was mostly very mellow. Leaning back, taking in the beauty and ruggedness, glassing a lot of country while sitting in one spot on a raft was sweet. However, we had to be on constant guard for getting the raft stuck on shallow rocks in the river. A few of these were very difficult to get off of; lots of work and wasted time. We started seeing some sheep on side of the river, some ewes and lambs, they showed no concern as we floated by. One morning, we saw two bunches of sheep from camp, one with a nice ram. He was a mile or so away and a couple thousand feet up, he was a good looking ram, but not big enough to go after so early in the hunt.

Hiking up above the river and glassing was the drill. We found more sheep and two rams that were big. Hard to tell how big since they were over 2 miles away in the heat waves and we only saw their heads for a few minutes, but no question they were good rams! It didn’t look like they were with ewes, and there could have been more rams. We were pumped. The rams were in a rough spot and it would it would probably take a day and maybe an overnight stay to make a play on them. Then we got a text weather report. Big storm, three days of rain and snow. Tough conditions for glassing. The decision was made to move camp again before the storm, to a camp where it is easier to hunt in bad weather. No worries, it seemed to be easy to find sheep.

The storm was not as bad as we feared, the snow level only got down to 500 feet above us, but it sure set us back on finding more sheep. Glassing was tough to impossible. We did turn up one band with another nice ram, similar to the first one we saw earlier in the hunt and lower on the mountain. Good for him it was still too early in the hunt, so he was safe. 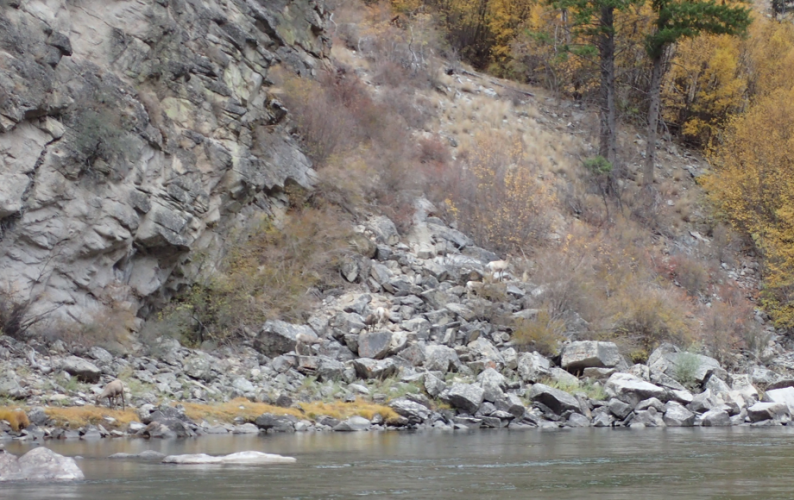 After the confluence with Big Creek, there are no more trails, the canyon gets steeper and deeper, with many places of shear cliff walls. The beginning of the ‘Impassaable Canyon’. It takes more time and elevation to get to good places to glass. The river has more flow, gets deeper and there are fewer problems with shallow rocks but the rapids get bigger. From reports, we expected to see more sheep near the river the further we went downstream. The opposite was true.
It was tough.

One thing that stood out about this country, it is so vast, but yet mostly void of animals. So much good habitat that seems empty. For the whole trip, glassing hours each day, we only found 15 elk, and less than 10 deer, with just a couple small bucks. It much easier to find sheep than anything else. 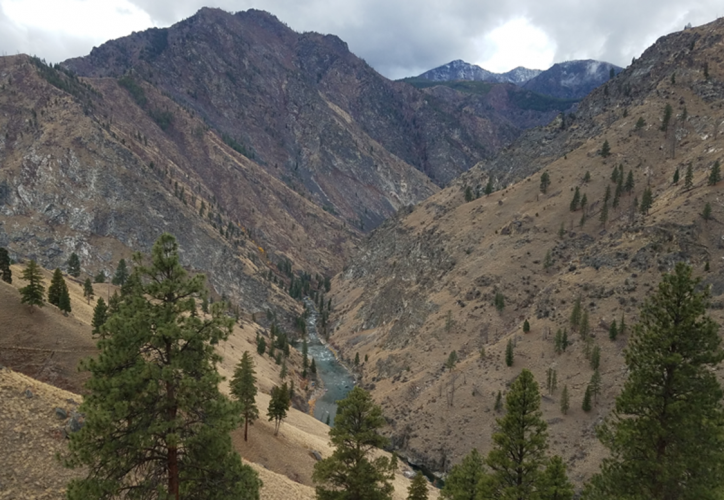 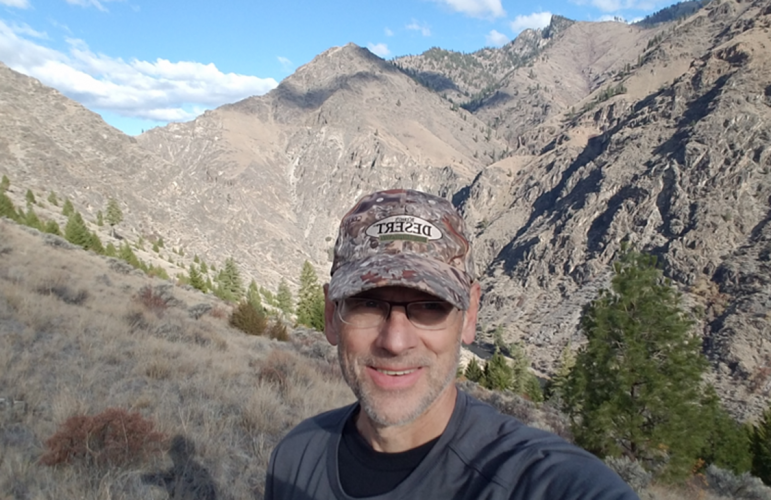 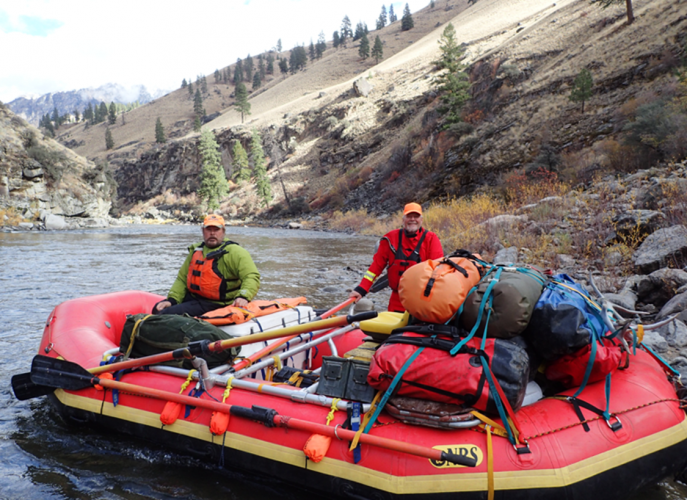 Enjoying your story and pics. Keep it coming.

This is my dream hunt. Bring it on!

Can’t wait to hear the rest of the story
R

In my experience, sheep hunting often has exhilarating highs, and some deep emotional lows. Part of this is because of the country they live in and it’s like looking for a needle in a hay stack. Sheep hunts are usually 'once in a life-time' so that adds to the pressure when you are not finding anything. We did not talk a lot about it, but we were starting to experience some lows. We were running out of time, plenty of places we wanted to hunt but time was getting too short. 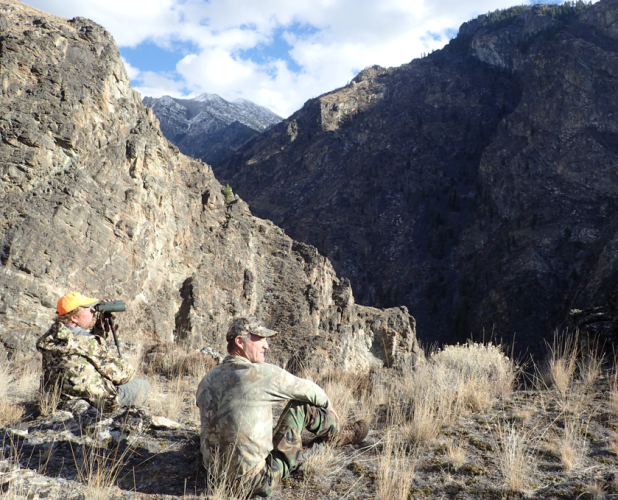 It got down to the afternoon of the 2nd to the last day; as we floated, I was glassing back up river and up on the cliffs saw two rams! We had not been able to see them until we had gone past the cliffs. They were back about 350 yards, standing, just casually watching us. L and I were in the rear raft, A and JP were 100 yards in head of us entering a rapid. We got their attention and luckily they were just able to row back up river across from us. They could not see the rams well at all, so we told them to pull across the river to our side and move up. They were nice rams, not old, but good. They looked about the same age and one had better bases and a longer curl. JP pulled his raft up on our side, right across from them. A got a great look at 150 yards and Boom! The larger ram ran up a chute where L and I could not see him. A fired again and the ram was down for good, he came sliding down out of the chute to a stop. Great! But he was only 20 yards from a shear 90 foot cliff. Not sure what happened next, if he kicked or what, but he started sliding. No! No!

We watched the whole thing in what seemed like slow motion… First he slid, then his head flipped over, then feet over head a few times and he launched over the cliff edge in free fall. He landed on a steep rockslide and tumbled for another 25 yard to a stop, only 30 yards from the river! We were sure his head and his horns would be all busted up. Miraculously, he hardly had a sign of the tremendous fall, except for left rear leg that was broken in several places. A dramatic finish to the dream hunt. A had a Middle Fork ram! 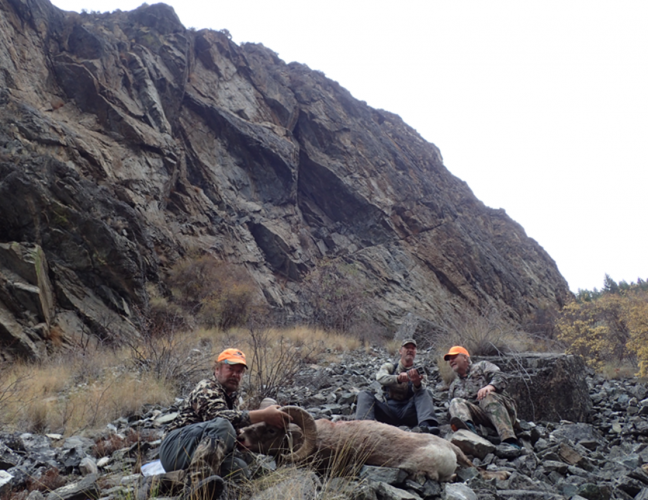 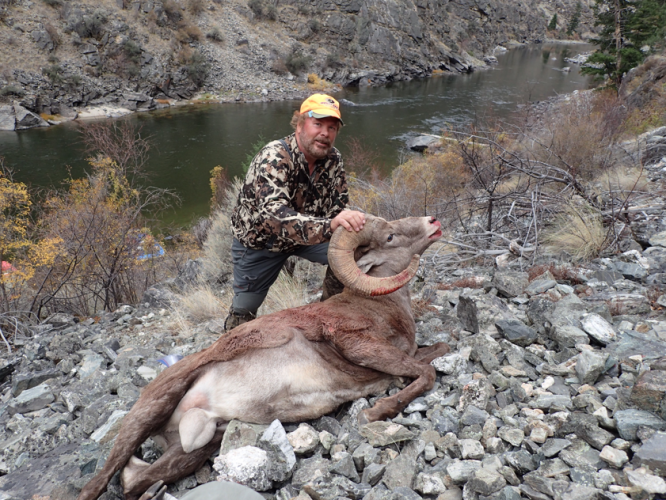 Thanks for sharing your story, James.
W

Impressive indeed! Thanks for the write up and pictures.

Beautifully brutal country and congrats to all on the ram!

Awesome adventure! It’s a dream of mine to hunt sheep from a raft down a big river canyon.

Awesome! Thanks for sharing.

Congratulations to all.
It is truly rugged, humbling awesome country to experience

What an adventure! Thanks for sharing the story and photos.

Awesome! I floated the MF two years ago and went on an unsuccessful but beautiful spring bear hunt in the Frank Church last year. Since, I have given a lot of thought towards making some sort of float hunt happen there. One of the most beautiful sections of river and wilderness I've ever experienced. This is further inspiration, so thanks for sharing your time there!

Helluvan adventure. Thanks for sharing

Great recap of your friends hunt. Fantastic pictures! Thanks for posting it.

Congratulations to all involved! Idaho is incredible and my favorite place in the entire world.
B

I have wanted to do a float hunt for several years. Congrats on the hunt!
You must log in or register to reply here.