Seems like we are in need of some hunting stories. I’ll share one that is not all smiles and back-slapping because I’m still thinking about it pretty often.

I have 3 sons, two of whom are old enough to hunt. This was my middle son’s 2nd deer season in Vermont. He’s 11 now and still too young to hunt in NY. He was a trooper in 2019, but never got his chance. My oldest son shot his first big game animal that year, a doe pronghorn at 200 yards in central Wyoming. That was a cool experience.

So this year’s Vermont youth season opener found me and middle son hunting an area of mixed farm fields and forests on the VT side of the Champlain valley. Our first-light spot was a bust, so we circled a nice oak hill and still-hunted up on the down-wind side. We busted two does out almost as soon as we started up. No shot. Then we spooked another on the way up, but again, no shot. My son has not yet mastered the art of walking quietly, while also looking around (and let’s face it, neither have I). We spooked another deer on the top of the hill and decided to sit on a log up there, that offered a nice view down towards an open field. I was surprised to have seen so many deer!

Well, we hadn’t been there long when we saw a pair of deer coming off the field and quartering towards us. They were going to pass under our hill at about 80-100 yards. I wasn’t sure we’d have a lane to shoot, but prepped the kid for how I would stop the deer if one passed into our lane. He was shooting his .308 from a sitting position, off a pair of shooting sticks. Our practice had indicated that 100 yards was pretty much his max range.

I took this photo of him just a few minutes before the deer appeared. 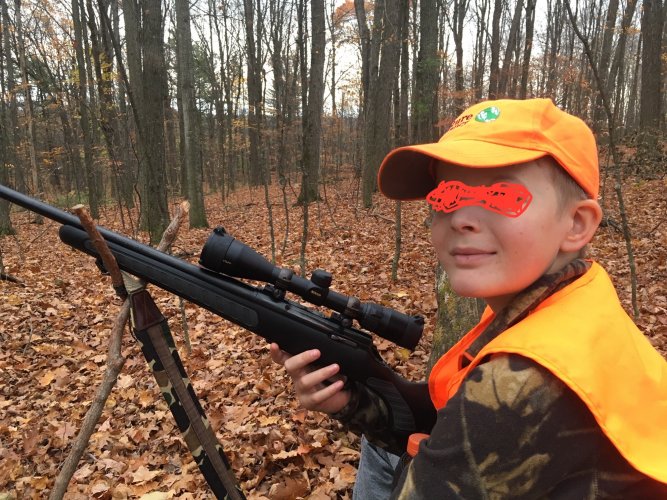 It was a tense minute or two as the deer came in and out of view. The moment of truth was drawing near. Luckily, one of the two deer stepped into the lane at about 80 yards. Just as we’d planned, I grunted, which stopped the deer. I’d told him he’d only have a few seconds to take the shot if it stopped and I remember saying, “there’s your shot.” He took it.

At the boom, the deer hunched just a bit, kind of hopped and then ran straight ahead, starting to slow as it went. It disappeared behind some brush and I didn’t see, or hear anything else.

I knew he’d hit it and I was feeling pretty optimistic about the deer slowing down. Those of you who have hunted with your kids can probably relate to what an exciting time it is to de-brief a shot as the adrenaline is still pumping. We spent half an hour waiting and talking about it and wondering if the deer was down in that brush. My son was really excited. It was just a wonderful, proud poppa moment, even though I knew this wasn’t a done deal yet.

When we dropped down to where the deer was standing, we couldn’t find any blood. We spent 5 minutes looking and my heart was starting to sink a bit, when finally, the kid found some! We were then able to follow a light blood trail through the woods to where the deer had disappeared. She wasn’t laying there, so we continued on the trail, which was sporadic and light, though there were some bigger splashes. It led out to the edge of a cattail swamp and the blood was easier to see on the tan grasses. We weren’t rushing, but we weren’t pussyfooting either, as I could tell there was rain coming in.

The deer took us along the edge of the swamp and the blood trail wasn’t too bad. Suddenly, I heard a rustle just ahead. The deer had bedded under a dogwood bush and we had just a glimpse of it getting up and running away. No shot. At this point, we knew the deer wasn’t hit as hard as we’d like. It was also starting to rain a bit. I elected to risk losing the trail to give her time to bed again and hopefully die. So we hung out for half an hour while the rain blew in. When it was over, we found the blood trail much harder to follow, but there were still visible spots. We followed that deer along the swamp for another 100 yards or so, when the swamp ended at an old road, with a fence running along it. A field was on the other side. At this point, we just couldn’t find any more blood. I didn’t figure the deer was going to bound over that fence into a really open field along a road, so I figured she’d ducked back in the woods. We spent the next hour or two circling into the woods, into the cattails, looking for any sign. We couldn’t find a thing. We talked about our responsibility to keep looking as long as we were able, because he’d definitely hit her. I tried to manage his expectations. We still had a chance, but things weren’t looking great.

Eventually we decided to take a break and eat something. I called my brother, who lives nearby and he wanted to come help. I also called several registered dog trackers in the area and was lucky enough to connect with one. He was out on a call, but said he’d come by when he was done with that.

When the tracker showed up, we were in the same spot. We returned to the site of the shot as the handler explained how dog tracking works. I always assumed they tracked the scent of blood, but apparently, that’s not the case and it’s more like an individual cocktail of hormones released by the deer at the shot. The dog was tired, but took right off and quickly had us to where we’d lost the track. To my surprise, it went right by our woods route and went to the metal fence. I hadn’t noticed a smallish rectangular opening in the fence, but the deer knew it was there. A single drop of blood was underneath!

The deer then appeared to run across the field and into a woodlot that was fearfully thick. We spent the next couple of hours crisscrossing that woodlot, but there were tons of deer trails and eventually, the dog kept losing the scent at this big crossroads area. We even started over at the fence again and still ended up with the same result. It was going to be dark soon and we had to face the fact that this deer was not hit hard enough.

I’ve never lost a deer before. It’s a frustrating feeling, but made worse, in this case, by the fact that this was my son’s first deer. It was difficult to watch the excitement of the morning change into the disappointment of the afternoon. He stuck with it all day and I told him I was proud of him, but I was a little stuck between emphasizing that this can happen and that we did the right thing (trying to make him/us feel better), and on the other hand, making sure he understood that this was a real bummer and that we put in our time practicing to avoid these situations. I didn’t want him to beat himself up and I also didn’t want him to feel completely ok about it. It’s a strange thing and I imagine that we’ll end up talking about it more in the future.

The fact is that it’s a shitty situation all-around. But, I do hope that in the end, it becomes a valuable learning experience for him (and me). I know that I think about it all the time, wishing that his first deer had been a different experience and wishing that the deer hadn't suffered like she did. We will be back out next year and we will probably get in more rifle practice than usual. If you ever find yourself in a similar situation (and I hope you don't), I would strongly urge you to get help from a tracking dog. That dog was awesome and I have no doubt that if this deer had been dead a few hundred yards from the spot we lost the track, he would have found it. 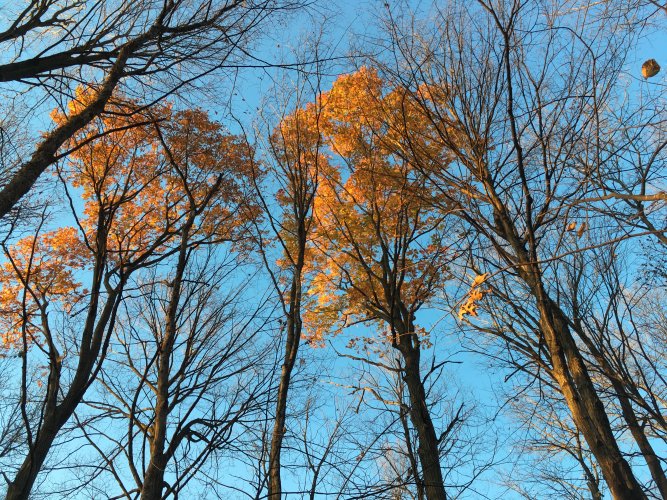 Thanks for sharing the story. It's a stinker, but great job trying everything possible to find her. Lots of valuable lessons wrapped up into one day there for your son. It can be nerve wracking hunting with kids (12 and 14 year old hunters in the house). It can be fun as heck too.

As a father I'm dreading having to go through this with my kids. Just going to be difficult. Thanks for sharing.
You must log in or register to reply here.