It has been quite the road. Two years ago I went through knee reconstruction on my left knee twice. 3 months ago I had my right knee rebuilt.

I was blessed to not sleep in anticipation of the deer opener in Washington. The jitters drove me out of my bed at 3:30 even though I was in my trailer… I meditated and prayed to center; followed by a cup of coffee for cleansing. Feeling the crisp breeze over my face through the window pushed me to leave early.

Walking through the scablands of Washington in the dark under a ghostly halo of white made me feel alive again. The last 2 years dance through my head. Powering through PT, and what seems to be endless pain got me here and a smile crossed my face.

After slogging across a wide shallow ringing creek and spooking many cattle I came to the cliff face and tree I harvested my buck from last year. I settled in for a long rest before opening light. I set 2 vibrating alarms to wake me, but I never slept. The stars were bright and gorgeous, while my heart shivered with anticipation.

In the dark I stood to stretch and do my PT, and warmup… Settling the pain for the moment.

As the classic blue ring began its glow on the cliffs I watched 2 does and a spike buck feed ghostly along into the night.

As shooting light rose two does suddenly arose from the deep sea of grass grown throughout our first rainy season in some time. Somehow i believed they had spotted me, in-spite of my diligence in choosing my spot for broken shadows and wind.

They stood and stared for what felt like an hour, when the doe to the right descended into the bowl of golden grass below me. Seriously confused I wondered what was happening. In my 3 o’clock I caught a flash just 20 yards away. Five deer had clearly fed into the bowl to my right and the does had been staring at them. They all proceeded to descend into bowl and evaporate into the sea of grass for the moment.

I had caught a glance of antlers, and had settled I would shoot the first 3 point or better buck larger than last years deer to fill the freezer.

Time ticked by and I crept behind my rifle in hopes of the deer exiting through their usual sheep trail up the cliffs. Step by step the does led the way a few minutes later. First a very small 3 point appeared, followed by a 3 point with eye guards. I rapidly decided to take the shot. I let out a fawn bleat when the buck landed on a small flat.

Following @JLS guidance I focused all my attention on the trigger as I let the crosshairs rest on his heart 146 yards. I felt the trigger break and pressed it into the guard following through well.

The buck sprinted 20 yards straight at me and turned broadside. I squeezed another round through his vitals wanting the buck to pass quickly. He had been dead on his feet, and vanished into the grass.

I waited a moment scanning the field. I stood and walked to where I believed he was. Nope… I started a search pattern, and began to panic. “Had he crawled out of here?” I anxiously pondered. I decided to climb the cliff for a vantage point. As soon as I gained elevation, I spotted him exactly where he had absorbed the second round.

I walked straight to him never taking my eyes off of a unique bunch of grass. He vanished again, but suddenly appeared under the mark. It was astonishing to realize I had walked 5 yards away from him.

Why do I tell this story? I am so blessed. Thank you to @JLS for working up an amazing Absolute Hammer cartridge. Thank you to my buddy Les for giving me the privilege of hunting his land (WA is primarily private in this area). Thank you to my amazing wife, Kim, that loves wild game. Thank you to all of those that have motivated me through so much rehab through your direct words and stories.

Hopefully some day, I won’t be so damn sore after a 3 mile hike and processing a deer. I celebrated with coffee and arthritis cream. Keep grinding Hamm!!!! 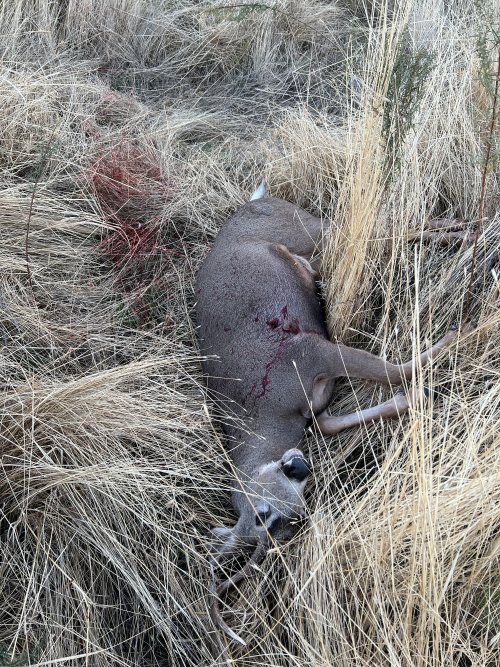 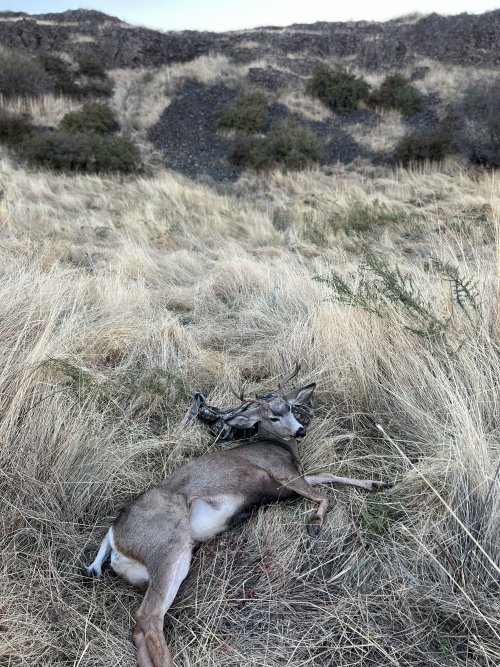 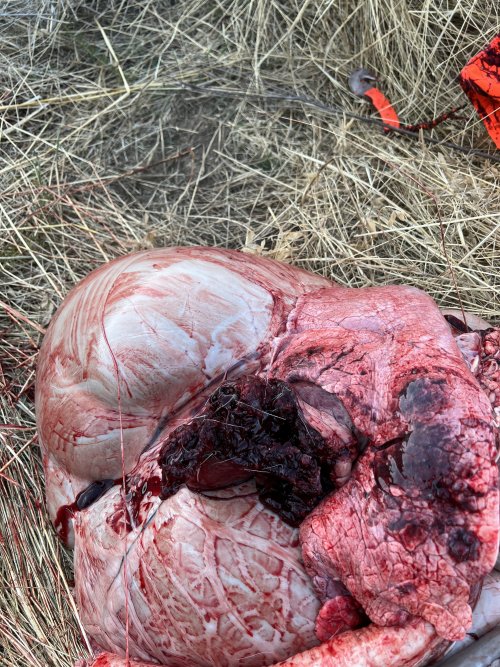 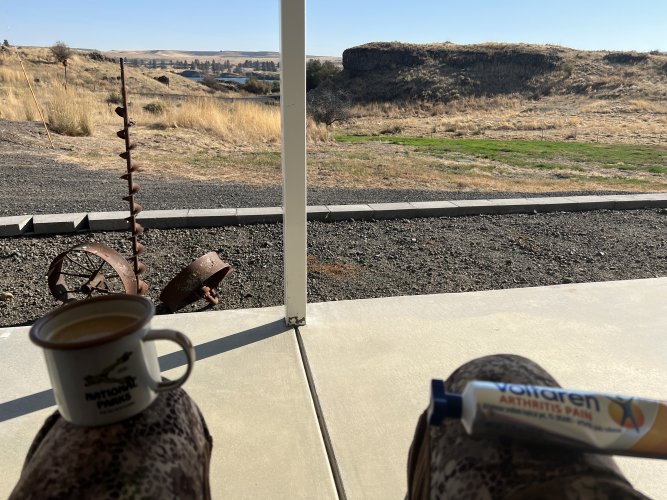 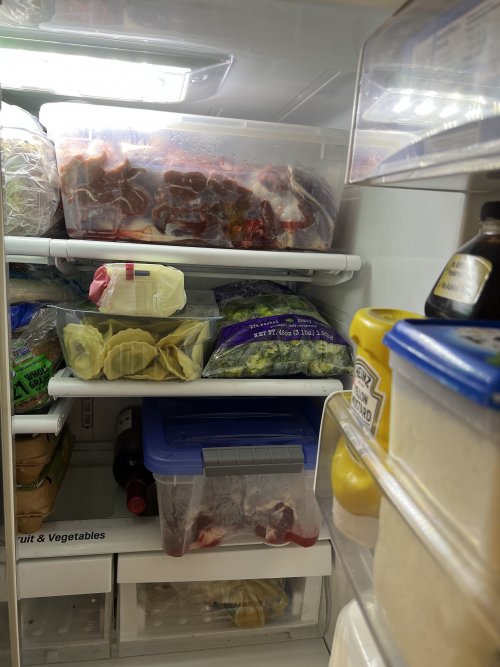 Way to get back in the saddle. Gotta feel good to be back on the path of normalcy.
Congrats on your success.

Awesome write up. The Voltaren pic made me laugh. Way to get back out there! Congratulations

Loved your write up! Absolutely gorgeous country and buck. Congratulations

This is great news! Congrats on your success. Not just with the buck, but with the physical and mental recovery! I hope this is a new beginning for you- and every season is filled with successes.

My father just had his other hip replaced. After the first side, he assured me he was a new man…
he was hurting bad within .5 mile.
I felt awful for dragging him out.
Now with the other side done, he promises he feels better than ever. I hope he takes the recovery and PT as serious as you have

Thank you all. This site has been a place of inspiration and accountability for me.

@FoodIsMemories , it’s a tough road. I’ll be praying for his health and recovery. I also know what it’s like to be on the outside of a situation like that. Prayers and positive vibes to you.

Super stoked for you!!! Glad you got meat in the freezer!! Even happier that you got the job done. 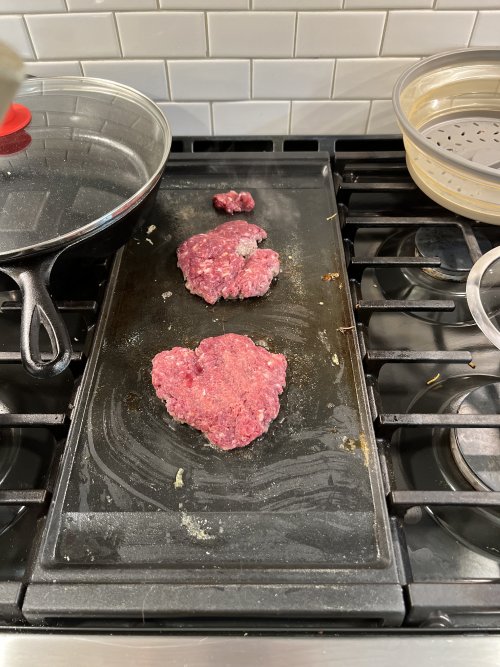 Field to fryer! Deer Bacon Maple Sausage. A little less spice than I like. I’ll adjust my recipe next grind.

I can imagine that this buck, and every subsequent buck and/or outdoors adventure will be sweeter for having gone through the tough times.

Nice of you @Hammsolo to hat-tip JLS and your gracious landowner.

This is a great thread. Love it. Big Congrats!
S

Congrats!!
You must log in or register to reply here.