Last month I got a call from Utah DWR asking if I wanted a turned-in tag for my first choice antelope unit. The answer was a quick resounding "absolutely!"

Several sources told me I should expect a good buck, mid 70", but you just might turn up a smoker. I thought to myself, ehhh that'll work for me. So I called my brother in Utah and made quick arrangements for travel and lodging to get it done.

The month went by fast as I didn't have a lot of time to focus on the antelope hunt. I had just started my new Army assignment at a new post, and I was dealing with all of the challenges of moving the family into a new house and starting the kids back to school. But, in the back of my mind I secretly waited for September 18th to kick off my first antelope hunt.

Opening day arrived and we shopped for quite a while and built a hit list with a lot of great bucks. None were giants, just good representatives of the species.

The next day we decided to explore a couple more spots and found a few more average bucks, but again, they were just more bucks so we moved on.

While driving to the next area, we found a great glassing spot overlooking miles of prime antelope country, so naturally, we took a walk and pulled out the glass. We found a few bucks in the distance and a few on nearby hillsides, but little did we know, we were standing in the middle of what was about to be a territory war.

All of a sudden, we were surrounded by pronghorn bucks. I looked over at least a half dozen in a few short minutes. All of them were great bucks, but then a loud grunt drew my attention to a beauty stepping out of a draw directly behind us. He didn't care we were there. He was dead focused on the other bucks moving into his area. He was THE buck and he was standing 100 yards behind me. I took one glance at him and I knew this gorgeous buck was mine.

I quickly ran to my pack, grabbed my rifle and chambered a round. While grabbing my rifle, my buck slipped away from me over a slight rise towards a one of his nearby challengers. The rise he slipped behind was just high enough to prevent me from getting a shot from where I stood.

As I made my final move on him, I noticed he was laser focused on another buck. This distraction allowed me to sneak to the top of the rise to hopefully get a shot. Once there, the buck caught my movement and looked straight at me. I was pinned, but I needed to gain another 10 yards to get a clear shot. Fortunately, he couldn't shake his territorial focus on that pesky onlooker.

I steadily crept forward and got into a solid prone position with the buck perfectly broadside at 165 yards. I quickly settled the reticle behind his shoulder and perforated his lungs. He made a mad dash out of sight into the draw, but I knew he was done.

I stood up from my shooting position and waited for my team to join me. We quickly found the blood trail and saw where the buck went down. My emotions peaked as the old boy grew with every step I took towards him. His green measurements feature 21" of mass, 5.5" prongs, and 15" length on each side. I had no expectation to kill an 80" buck here, but I did, and I'm ecstatic about it. 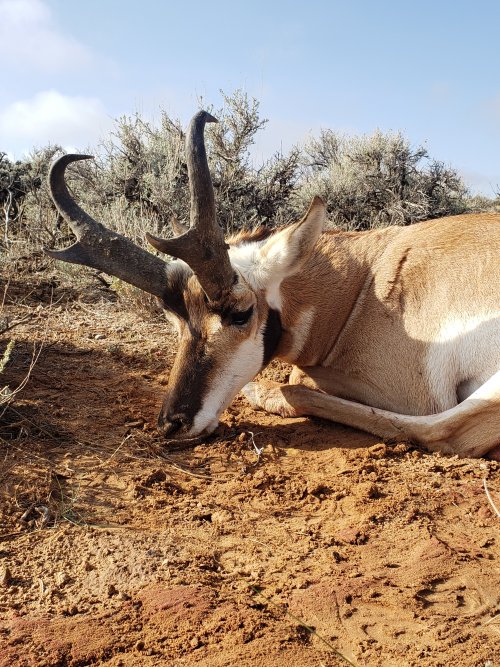 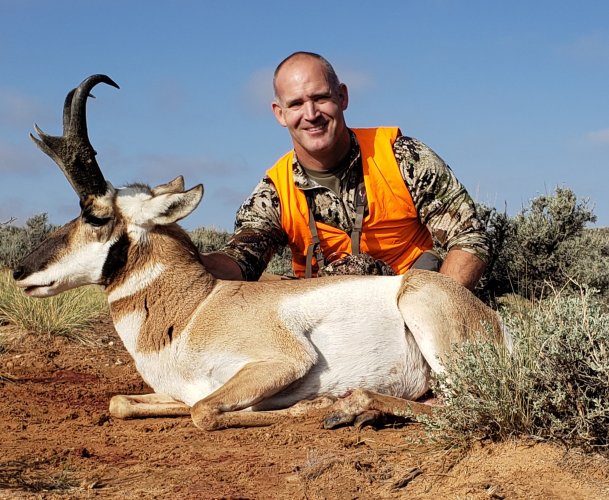 That's a great buck, congrats!
I

Location
Wherever the bugles are

Sounds like a great hunt and buck. I can’t see a photo though.

That’s a really great story. Congrats man. It’s always a great feeling when you spot “The ONE”. Thanks for sharing.
M

Congrats on a great buck
S

Congratulations on a great speed goat. Good job on having the patience to wait on the right one.
M

Beautiful Buck! Thanks for sharing

cahunter805 said:
Sounds like a great hunt and buck. I can’t see a photo though.
Click to expand...

Do you see them now?

Excellent! Great write up as well.

Great when it all comes together, nice goat sir!

Brentc said:
Do you see them now?
Click to expand...

That’s a stud buck!! Congrats again
You must log in or register to reply here.