This was my 3rd DIY hunting trip to Alaska, after 2 successful caribou hunts, I was going with a resident friend for moose. We were approx. 270 miles north of Fairbanks, and had river access with my friend's airboat. We made it to the river and had camp set up by 6pm on the 11th, and spent the evening cow calling every 30 minutes. The next morning around 11am, I spotted a big bull down river about 600 yards away. I made my way to the down river end of our gravel bar island, with hopes that the bull would hear our calls and turn way. I suddenly heard grunts coming from the opposite direction, and to my surprise another bull was coming in from the up river direction. I made my way back to the other end of the gravel bar and found a good seat on a drift log. I had a good rest on my shooting sticks as the bull stood broadside 200 yards away. I probably should have kept calling in an attempt to bring the bull across the river, but the anticipation of harvesting my first moose took over!. I could see that the bull sported 4 brow tines on his left side, so I didn't worry about trying to estimate if he was 50 inches wide. I put the 200 yard crosshairs of by BDC scope on his chest, about 8 inches down from his spine, and 8 inches behind his left shoulder. On the first shot I saw him hunch his shoulder a bit, but he just stood there. I chambered another round and fired again, and he continued to just stand there. I moved closer by about 10 yards and rested my Winchester Pre 64 Model 70, chambered in .270, on the limbs of a willow bush. I shot again, and this time he started to move toward the timber, and I threw another round at him, although I don't think it hit. We spent about 45 excruciating minutes before loading up in the airboat and traveling across to where he disappeared into the timber. It was a short search, as he laid not more than 30 yards away. He measured 55 inches and had 4 brow tines on the left side, and 3 on the right side, with another one broken off. Three shots connected in a 2 1/2 inch group. The rest of the day was spent quartering him out and moving the meat to a safe area. Two days later my friend filled his tag with a 52 1/2 inch, 4x5. We were done and off the river in 6 days, and before the bottom fell out of the weather. 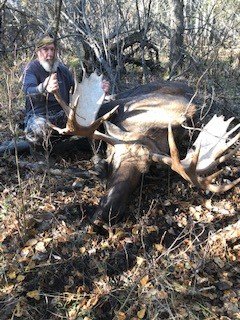 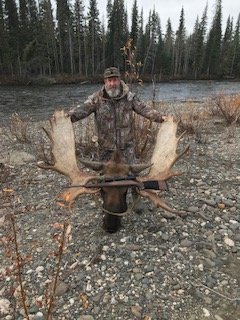 Mine similarly soaked up 1920 grains of lead before tipping over. I was so worried he would walk into deep mud and water.

Beautiful bull!!! AK is on my list for within the next couple of years!

What weight bullet were you using?

OntarioHunter said:
What weight bullet were
Click to expand...

OntarioHunter said:
What weight bullet were you using?
Click to expand...

I shoot HMS Berger 130gr VLD's in my gun, as they have proven to group well out of my rifle. I know most will say they are too lite for moose, but the rifle has a lot of sentimental meaning to me. My father took 12 moose with the same rifle back in the 50's, 60's, and 70's, albeit Canadian moose in Ontario, that were probably a bit smaller than an Alaska Yukon moose.
A

Congrats, I would love to ado a DIY Moose hunt in Alaska. Nice write up
S

That is a dream hunt right there. Congrats
G

Nice!
You must log in or register to reply here.

A
The moose i scared to death

Close But No Dice