Well I’m finally getting around to a quick write up of my dad and I’s first ever Montana deer hunt. We decided to finally give the general hunt a shot after a couple years of talking about it and with some prodding from a friend of ours with experience in the area we ended up hunting.

Day 1: we pulled into town in the morning and grabbed a room at a small local hotel. We did some grocery shopping and then decided we would go for a drive just to get the lay of the land where we planned to hunt. I was surprised by the number of white tails in the river bottoms around town and on our way out to our area, including some really nice bucks. After driving around the chunk of ground we liked, we decided to do a quick 30 minute hike up on to a ridge line to do some glassing for the last hour or so of light. I split from my dad, and as I walked up into the saddle I was aimed at, I immediately started seeing deer. I sat down and watched a couple of does, a small forky and a small 4-point that was harassing the does. I took a couple pictures and starting looking at some other draws when I started hearing a bunch of grunting down by the deer I had seen. When I looked back, I saw a buck that got my heart pumping chasing a doe. I slipped my pack off and settled in for a 250 yard shot as he stopped broadside. First shot was great, but he didn’t move so I gave him 1 more right next to the first and he stumbled down over the hill. I ran off the saddle to find him piled up only 25 yards past where I had last seen him, and boy was I excited. It was the second biggest deer I had ever killed! Dad eventually found his way over the ridge to where I was at. We boned the meat out and packed it all out that night, only about a mile back to the truck. 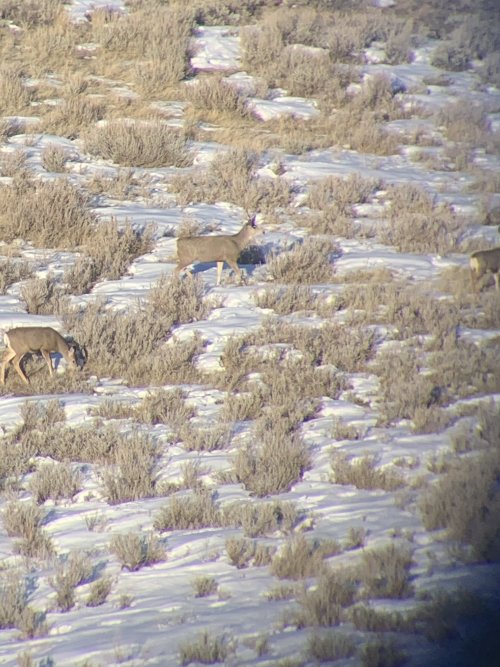 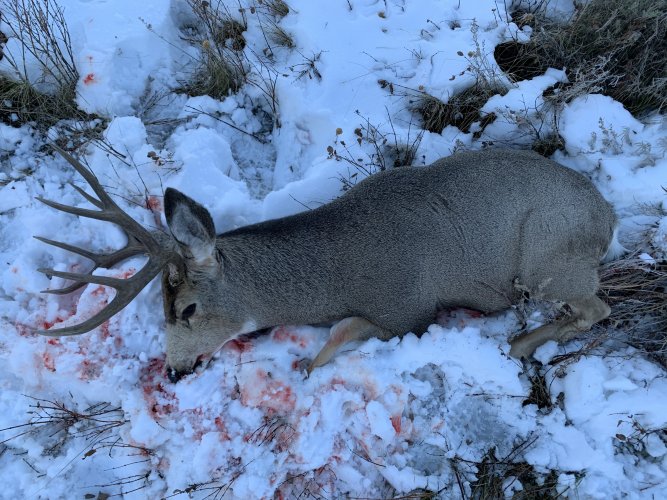 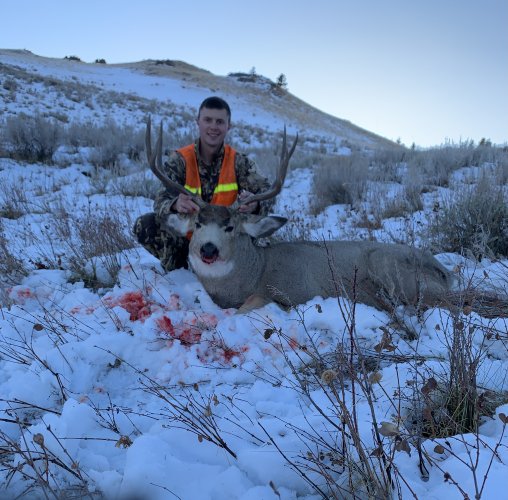 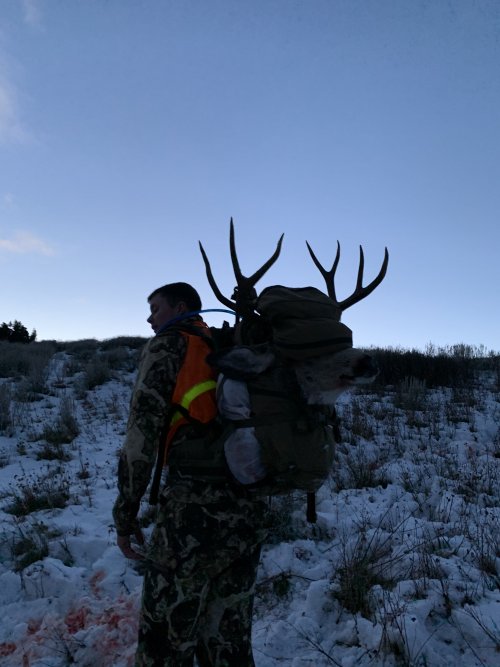 Day 2: we opted to check out a couple of smaller public pieces closer to town, and glassed up a decent 4 point just over the border on to private. We hiked over to where he might cross but he opted to head down into the draw in the private with his does. That afternoon, we got in touch with a friend of ours in town, who wanted us to try a big sagebrush and timbered draw well east of where we had originally been hunting. We spent the whole night glassing a couple thousand acres seeing 0 deer and a fair number of boot prints (along with quad tracks where they should not have been). We went back to the hotel with plans to go back to the same area that I harvested my deer the day prior. 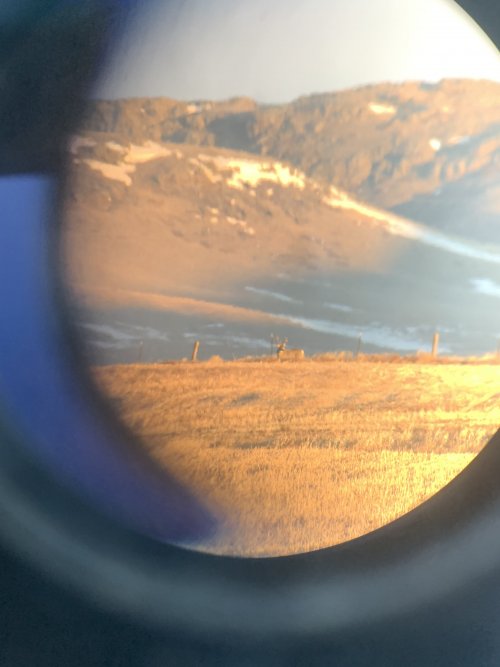 Day 3: on our way out to our desired spot, we stopped and glassed a small chunk of public near the road, which resulted in us seeing a decent 3x4 walking across a large field. We hustled out of the truck and popped over into a draw to see him standing there staring at us at 150 yards. Dad pulled up and took a shot, which appeared to miss just high, and the buck took off. We watched him for quite a while as he crossed over to private, and he looked 100% healthy. We also found no blood at the site of the shot, so we settled on the fact that it was a clean miss.
We motored down the road 15 minutes to a small walk-in property and took about a 4 mile round trip hike back into a spot where we could glass a couple of good looking draws. We saw 3 bucks on that piece (the biggest was a younger 3 point) all of which dad opted to pass on.

We finally got back to the chunk where I killed my buck around mid-afternoon, and set out up a river bottom and climbed up on a knob that allowed us to glass 3 draws off of the ridge we had hunted the day prior. We watched a couple whitetail does and a small buck work the River bottom below us, but other than that it was a dead zone for about 2 hours. Finally, and hour before dark, the deer popped out of the woodwork. I spotted what I knew was a nice buck at about 1300 yards, and we took off up the draw. As we climbed up, we saw another group of deer with a mature 3 point at about 400 yards. Dad decided to pass knowing we had a good buck spotted just around the corner. As we climbed over a knob to look into the draw where the bucks had gone, I didn’t see anything and got antsy thinking we needed to keep cruising up to catch this deer. Dad thought we should just sit a second and see if he wasn’t hiding in plain sight. Smart man my dad is. 2 minutes later I spotted the buck 110 yards across the draw still as a statue behind a small fir tree. Dad got set up and made a great shot to drop the buck right there. Biggest deer ever for my dad, we were both elated! 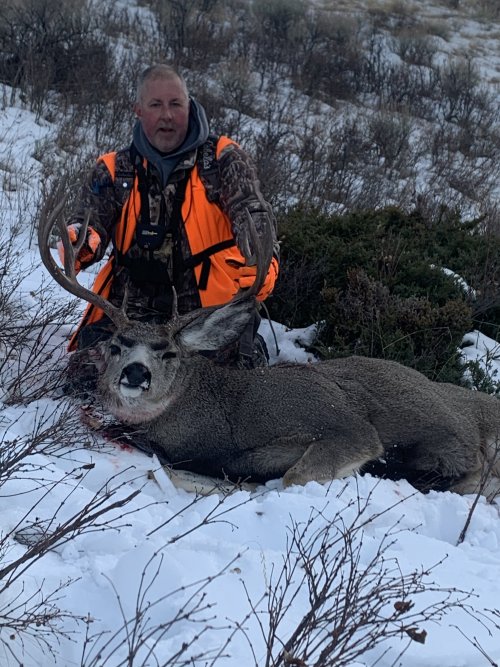 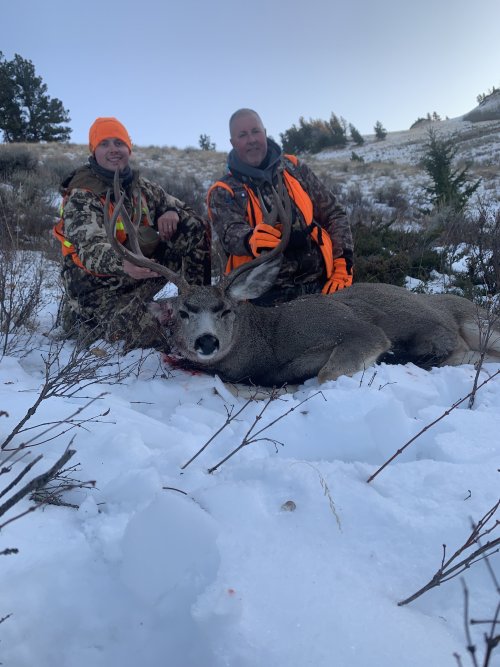 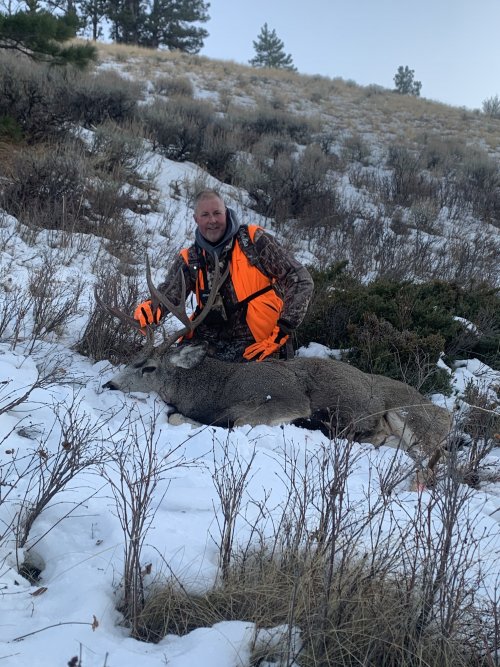 A big thanks to the state of Montana for the opportunity, this was an extremely memorable trip for both of us. My dad even said out loud “this is the best deer hunt of my life” which isn’t something I have ever heard from him. Probably not the biggest deer in the area, but these were 2 absolute trophies for us. Thanks for reading 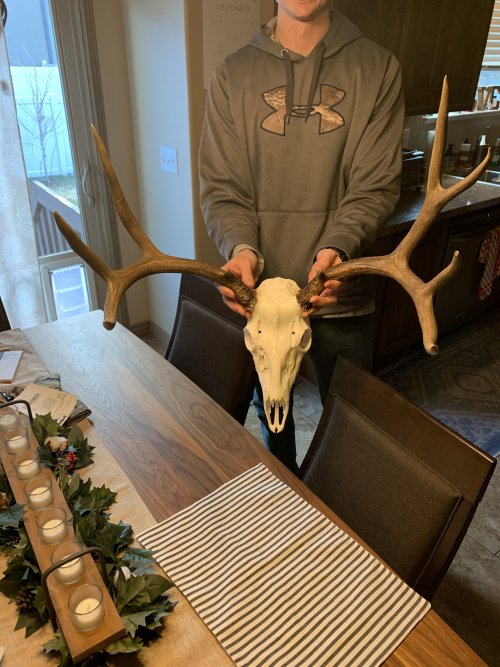 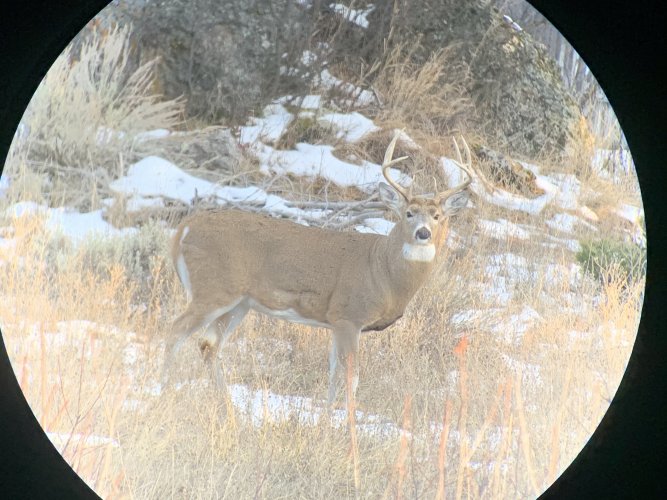 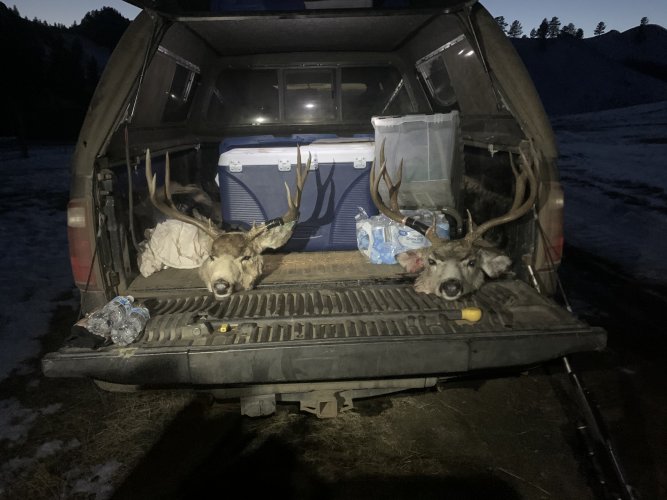 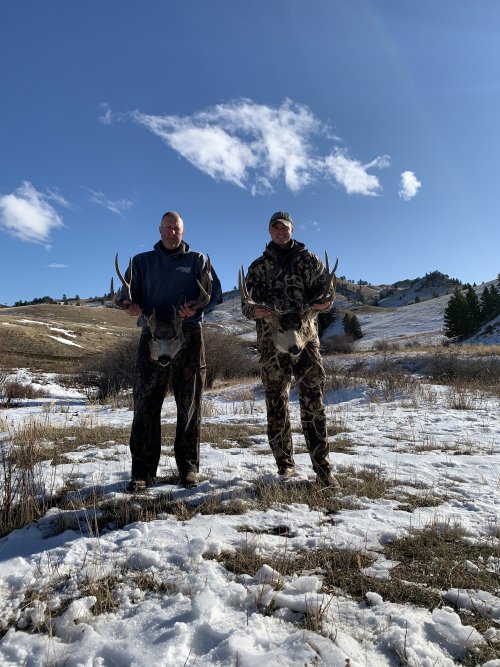 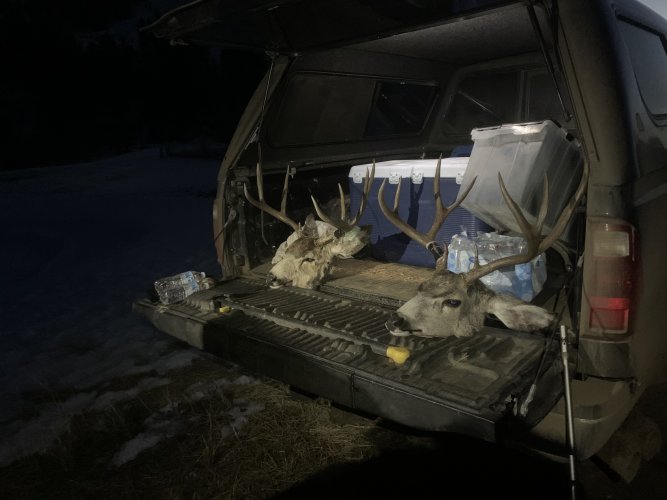 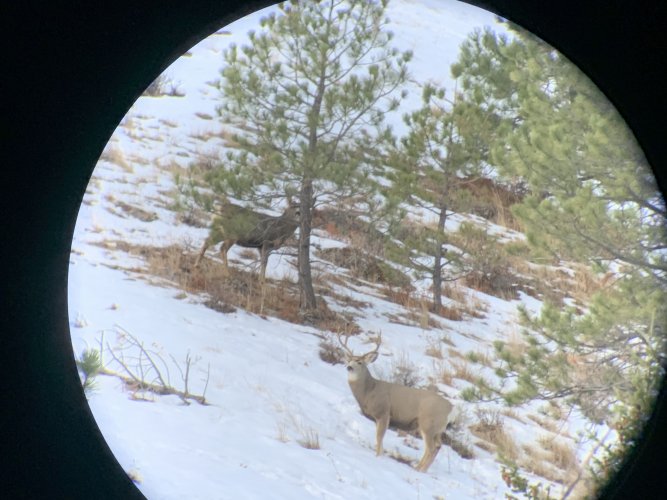 Memories to last several lifetimes, father & Son, that is what hunting is all about....congrats to you both!
R

What a great hunt. Sounds like a lot of action. Two great bucks too. And nothing beats hunting with your dad. Thanks for sharing

You betcha loved it! Hunts with dad's are truly special.

Awesome stuff. Congratulations to you and your dad.
F

Congrats to you and your Dad on a couple really nice bucks ! Memories you will have for a lifetime. I see you are from Ogden, Utah. I spent a couple years at Hill AFB several years ago and really enjoyed my time there and still try to visit the area when possible.
F

Thanks for the write up. 2 really nice bucks. I suspect you and your dad will talk and reminisce about this hunt often. Congrats

Fine looking deer. Antlers aside, hunts like that are what dreams are made of.

That is a great Montana buck, May well have been the best in the area.

Congratulations on the great bucks

Thank you all. No question that the greatest aspect of this experience was sharing it with my dad

fulldraw said:
Congrats to you and your Dad on a couple really nice bucks ! Memories you will have for a lifetime. I see you are from Ogden, Utah. I spent a couple years at Hill AFB several years ago and really enjoyed my time there and still try to visit the area when possible.
Click to expand...

That’s where I am at right now, and we love it here. Next assignment taking us to Vegas this summer but hoping to be back at Hill some day.
L

Awesome write up of your hunt and congratulations on a couple
Great bucks. Those are memories that will last a lifetime for sure.

Congrats on a great hunt! Well earned memories. Thanks for sharing the write up.

Enjoyed our story and it's nice to read this time of the year when the draws are just around the corner and hunting stories are few and far between. Very nice MT deer!

Enjoyed the read very much
love the eye guards on your dad’s buck
congrats to you both
You must log in or register to reply here.