2020 was a great year in the deer woods for my household. Deer season is a year round thing for us; trail cams, food plots, shed hunting, hanging stands, and setting ground blinds. We are blessed with some fantastic deer hunting properties that we have exclusive hunting rights on as well as some we own.

Season really kicked off in August when I got pics of a giant. They weren't the best pics but they were good enough to determine he was at least a 7×7. I didn't put a whole lot of thought into him at that point. I was distracted with my hunts out west at that point and those were the only pics I got of him during the summer.

My fall plots came up nicely this year and I had several deer using them. When bow season rolled around my main target buck was a 4½ or 5½ year old 130 class 8 point with a nice drop tine. As they do though, he seemed to disappear not long after shedding velvet. I did have several other 2 and 3 year old deer on that property that I can't wait to see next year. Most of them made it through and are still hitting that plot digging through the snow to the clover and turnips.

We have a 1 weekend youth season here in MO which usually falls on the last weekend of October. My 7 year old was counting down the days. He killed his first deer last January in our alternative season with his AR pistol. It was a 140 class 10 point and was going to be hard to top.

The first morning we hunted a blind I had set up by a big scrape in the timber. We saw 5 different bucks one of which we tried to shoot but couldn't make it happen.
The next morning we were back in the blind and the first deer to come by was a deer I had pics of. I thought he was a clean 10. I stopped him at about 65 yards and my boy put perfect shot on him. He went about 40 yards and piled up although we couldn't see him fall. He was headed toward the property line so we snuck out for a bit. My wife tagged along for the recovery. I saw him almost immediately and sent them up the trail while I videod. We were quite excited when we got our hands on him and counted 14 points. 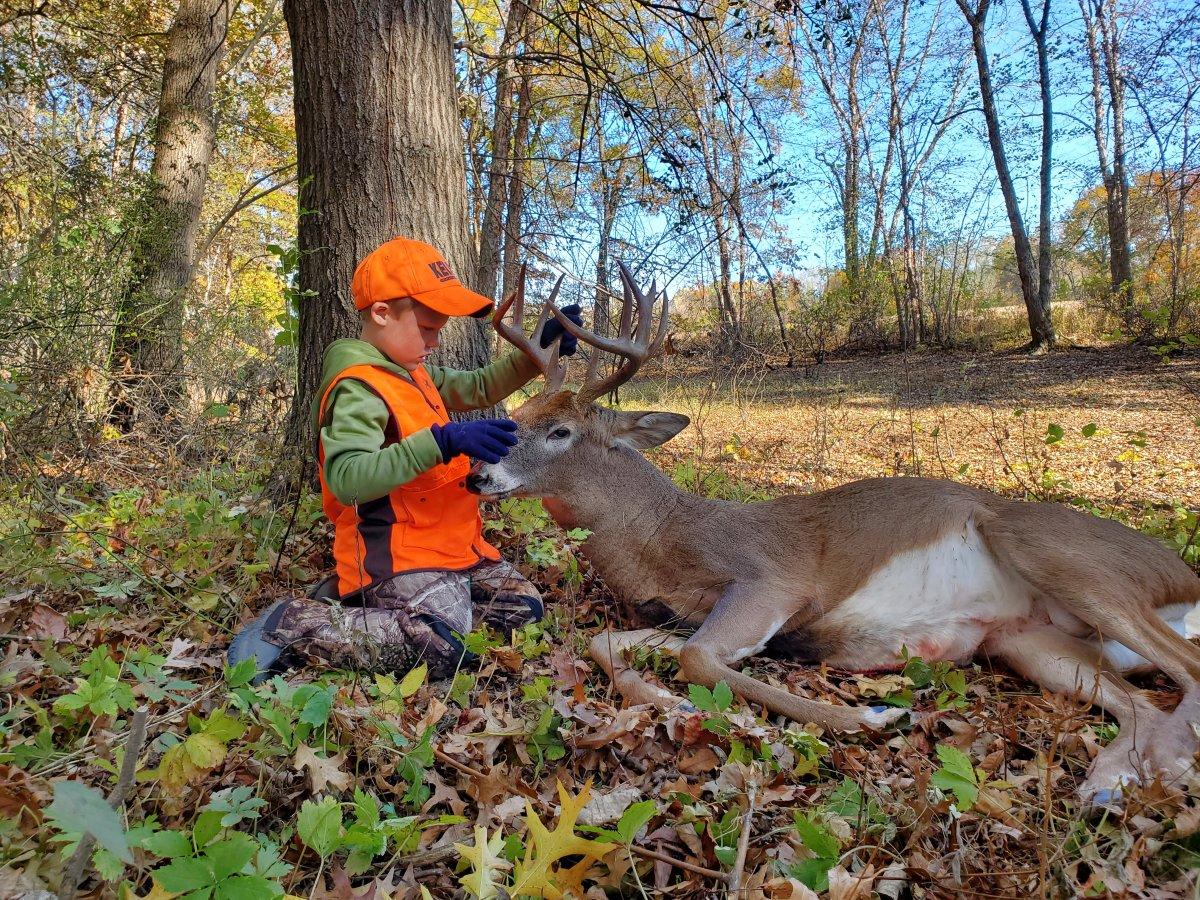 After youth season passed I was back to bow hunting. On November 5th I pulled a couple of camera cards and was very surprised when I got a daylight pic of the giant from August. He had walked by the camera 12 minutes before I pulled the card. 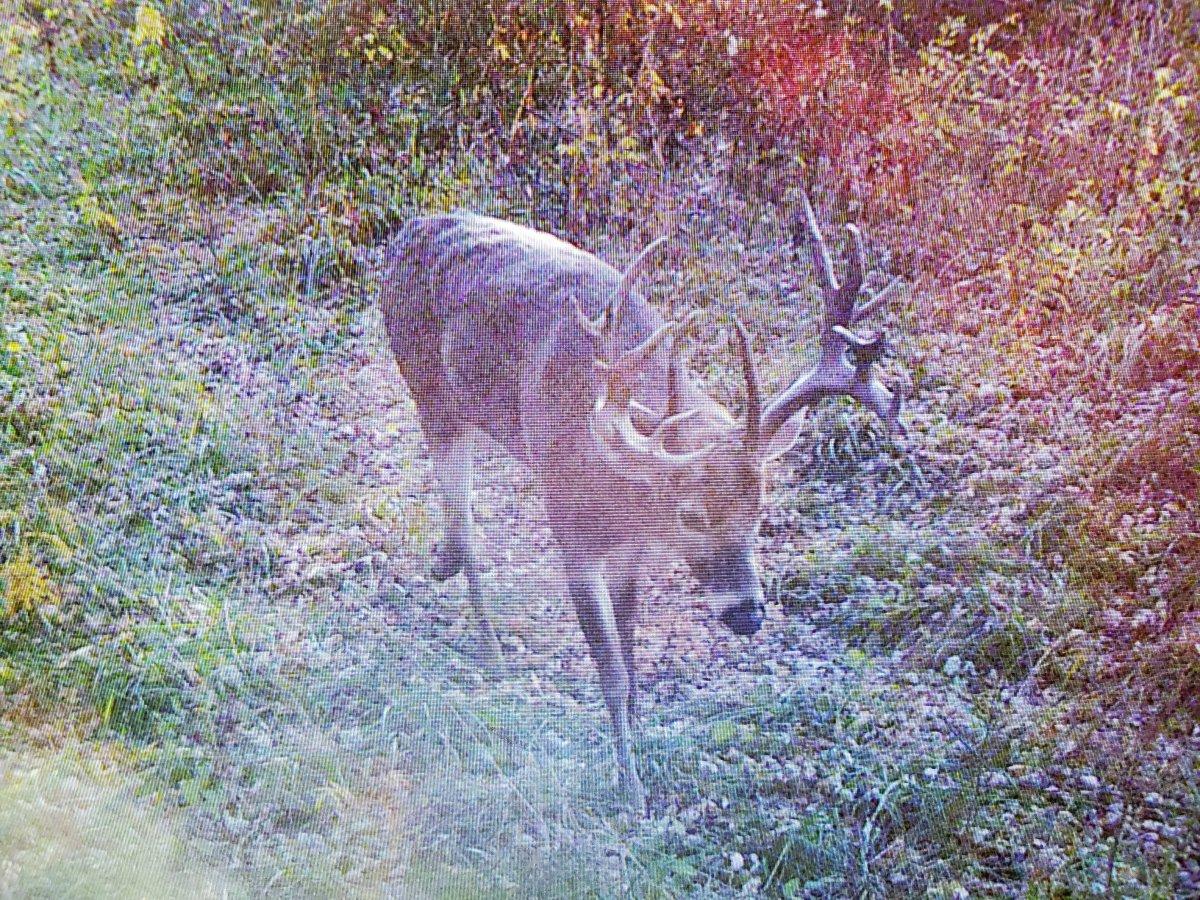 I decided to take off of work and hunt him the last week and a half of archery season before rifle opened. I did get 1 more pic of him on the 9th and even saw him once but I couldn't make it happen with the bow.

Rifle season opened up and my wife and I were both at it. She went to her honey hole and I went to the property I had spent hours and hours on the last week and a half. I had only been hunting the edges for fear of blowing him out. This place is thick on one side and he seemed to be pushing does in there.
I cut my morning hunt short since I had no action and my wide was covered up with deer. I was on my way to relieve my mother in law of kid duty when my wife called and said she had killed a buck at 12 steps and he was "kinda wide." The kids and I loaded up and we went to get the buck out. He was wide for sure. 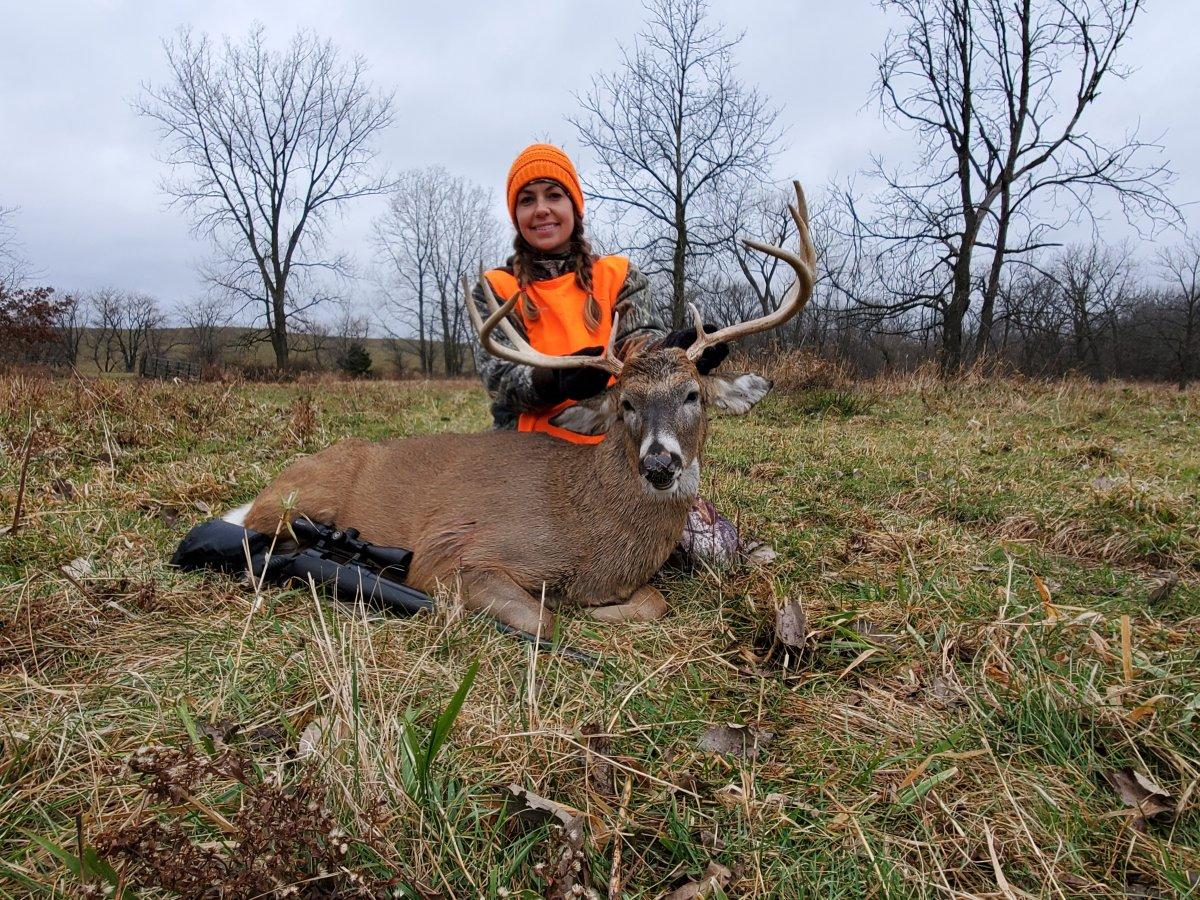 I spent the rest of the day hunting the big deer and ended up busting him and a doe on my way back to my truck...I was devastated.

I had to go to work Monday and didn't hunt. Tuesday I had to leave early to meet some clients at my shop(I am a taxidermist HOPEFULLY full time soon.) Once I was finished with them I got my wife and 2 boys loaded up to go pick up our middle child from daycare. I put on my orange and took the rifle so I could glass the big buck property on the way. We pulled into a field entrance and as soon as I put my binos to my eyes I saw a big buck pushing a doe through the draw. I bailed out and tried to get to the crest of the hill for a shot. I got on him and ranged him but it was too thick I was afraid to try it. I told my wife to go on to the daycare and I made a big loop around the draw. I couldn't turn him up and was about to give up. About that time my wife pulled buck up to the edge of the property where I told here to pick me up. I then noticed a doe and a fawn on the crest of the hill. They were looking back so I eased up there. I then saw another doe and then him. At this point I didn't know if it was THE buck but I knew he was too good to pass. I eased up as far as I could all the while checking. my phone for legal shooting time. 300 yards was as close as I could get. My wife was able to watch me shoot through here binos although she couldn't see the deer. When I walked up to him I lost it. It was HIM. Had to get some good field photos the next day since it was very dark by the time we got him out. 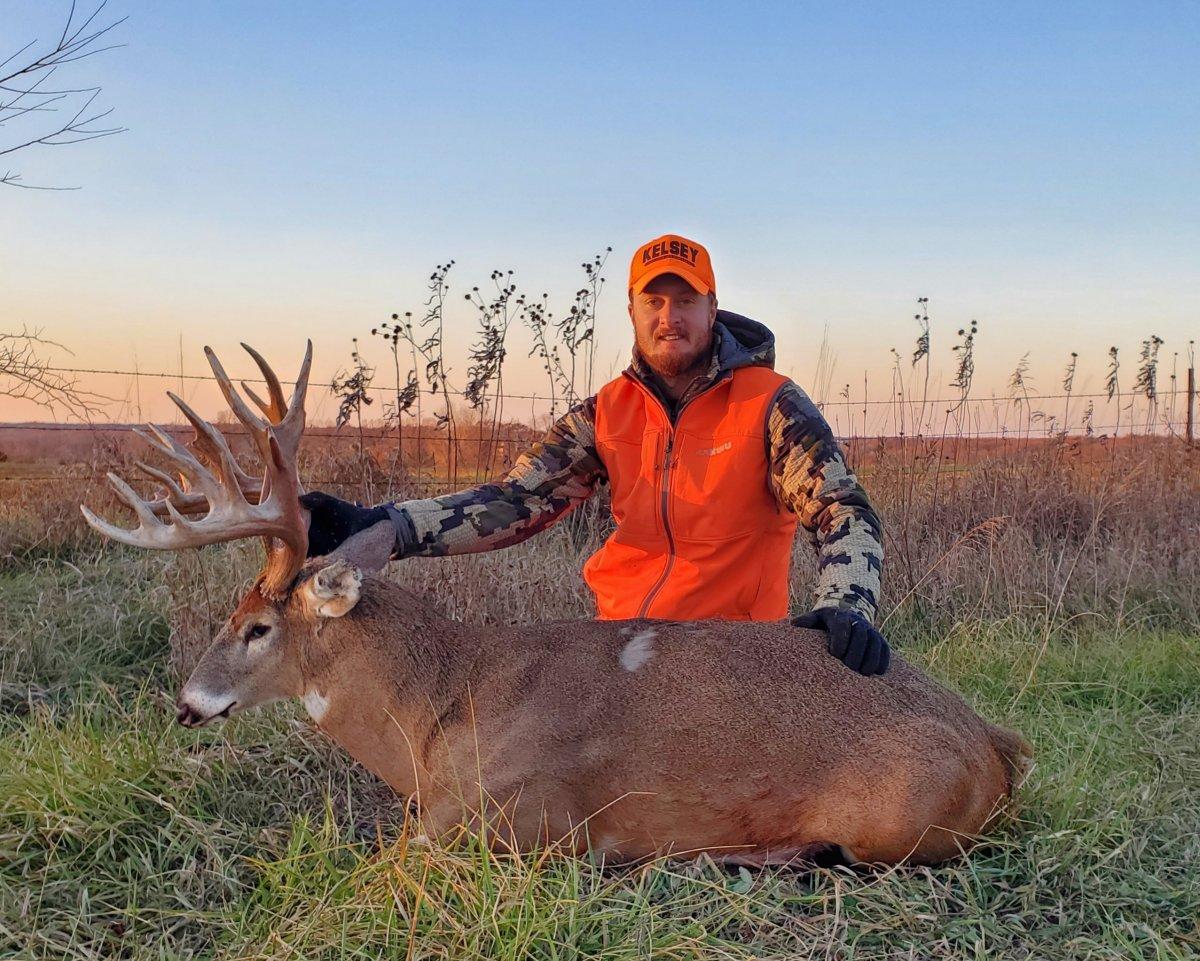 I sent his teeth in for aging and he was only 4½ which blows my mind. Very excited about the genetic potential.

My 7 year old added a doe to the freezer a couple weeks ago and I may try to do the same with my bow before season is over.

I am going to offer a very limited number of semi guided archery hunts next fall. Mostly to offset some of my management expenses. So keep me in mind if your thinking about a whitetail hunt next fall. I have a lot of good deer that made it and can't wait to see what they turn into.

If my soybeans do well I may offer a late muzzleloader hunt, but want to be sure I have the food first.

Thanks for reading...cant wait to see what this year brings!

Those are some great deer. Congrats to all of you!

You guys didn't fart around, those last two bucks are studs!!!

Holy smokes! I’d be happy with any one of those bucks! Congrats to you and the family!

Great deer and a great season!

Man that is awesome. Congratulations to you guys.
F

What a great season! Congrats

Thanks guys...don't know if we'll ever top it but we can sure try!

I was able to add another doe on the 14th. 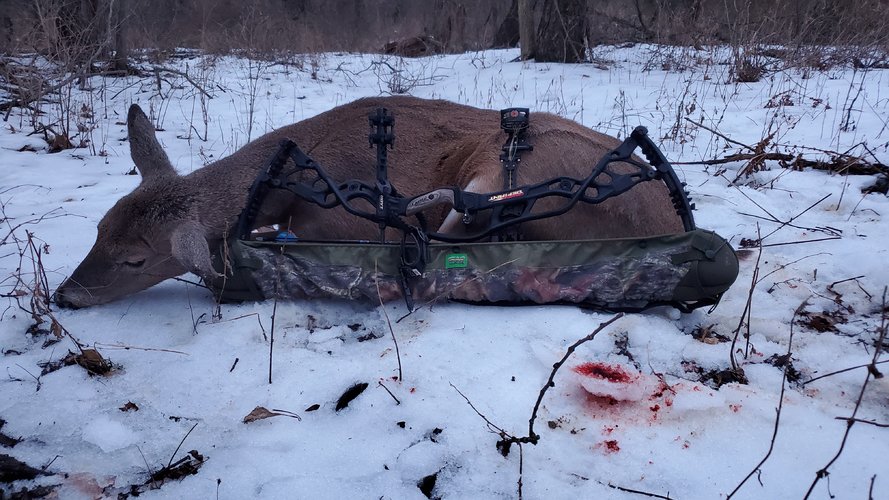 That buck is unbelievable! Congratulations to you and your family on a great year!
J

Quite the family affair. Looks like you're doing it right. Congrats!!!

Got the official score Wednesday on my deer. 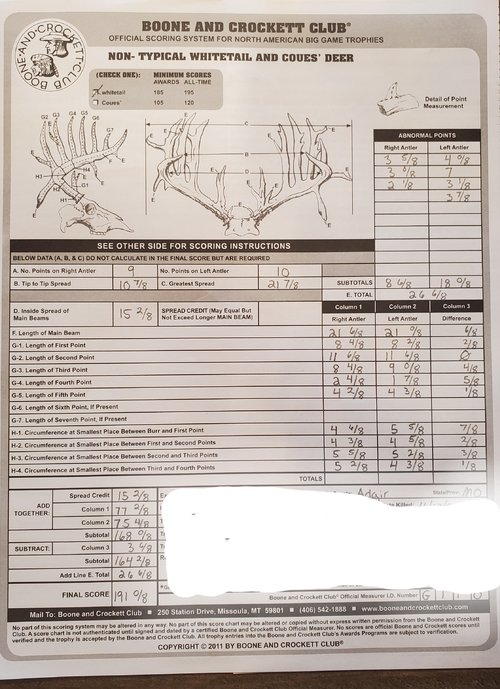 Great part of the world for a hardcore deer hunter. Congrats to the fam. Do you happen to have any Iowa land? I need to burn points in the next few years.
1

Very well done!! Quite the year.

Lord those are nice deer! The idea of year round management sounds pretty cool.
B

Congrats Redwood ! Looking forward to the fine mounting job you will ‘bliss’ that fine buck with !! I can imagine you might have some help over your shoulder on your son’s deer, and maybe a suggestion or two from your wife on hers too ! I know you will do them proud !
H

If you ever need a secret shopper to check out your operation, ping me.

Nice! Congrats
You must log in or register to reply here.