Choking up on the scope too much while trying to compensate for glare when shooting towards the East shortly after sunrise. A quick scope bite and a few stitches later, I was a much humbled hunter. The salt in the wound is that I missed the deer.

Not respecting "mud season".
Slipped on my ass on a downhill slope.
Next day slipped at the exact same spot and ruptured the quad tendon.
Luckily had surgery the next day...doc drilled holes in the patella and attached quad tendon. 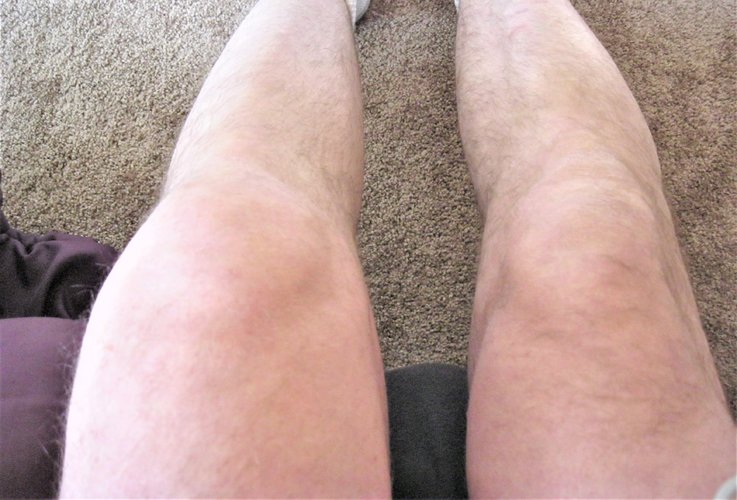 I was in a great spot where I have always seen plenty of nice sized bear. There are berries everywhere, and a small creek. Not many people know about this spot, but a few do. So I got in to the spot early. At this spot you can see about 1200 yards down into this old clear cut. There is an old over grown logging road that zig zags down to the bottom. It is very steep and brushy but from the top I had a great vantage point. When the sun came up I was surprised to see that there was not a single bear to be found. I looked over this spot for about an hour before a bear appeared, I say appeared because there is really no way in or out of this spot that I wouldn't see him coming and going. So he must have been laying in the thick brush and finally got up to eat. It was a really nice bear, not huge but a great first bear. I ranged him and he was 480 yards away and a hard angle down. I don't shoot out further than 300 yards while practicing and don't really even shoot more than 100 mostly. I really was not comfortable with the shot. I sat there and looked at that bear through the scope for 10 minutes. I decided it just wasn't a doable shot for me, and decided to start stalking. I started down the hill and got on to the overgrown logging road where I could easily stalk in closer and cut the angle of the shot down. This is where I screwed up! Instead of going nice and easy down this old road I decide to take a "short cut", and cut off some of the distance. So I cut through the brush and end up seeing where they had cut the road in and left a pretty steep cliff like edge that I was now at the top of. Well I should have just turned around and hit the road again. Instead I decided I could slowly slide down the steep grade. There was nothing slow or quiet about what happened next. First step off and my foot slid and hit a tree root. Next thing I know I am not sliding but tumbling. I hit the road with a thud. Through all of this I had hugged my rifle tight and it was undamaged, not that it mattered that bear couldn't get out of there fast enough. Every once in a while in the back of my mind I think I should have taken the shot from the beginning, but that is not where I messed up. I know that if I would have continued the stalk the way I had planned, it would have been a much different outcome. I am still glad that I didn't take a shot that I wasn't absolutely sure about.
Last edited: Jan 13, 2021

I guess I was about 20 years old and decided to bow hunt during rifle season. Had the biggest whitetail I’ve ever seen come by under 100 yards but well out of my bow range. Could have had him legally with a gun but I “ had to bow hunt “. Now I carry a gun in gun season.

Man I was reluctant to start this thread when this happened just because I was so mad And hated admitting what happened. Well after reading all these replies and hearing everyone else’s F’ Ups I’m glad I’m not the only one to make a stupid mistake out there like I did.

Last deer season I had a decent muley in my crosshairs, pulled the trigger, *click*. No round chambered.
You must log in or register to reply here.