She Brought Home the Bacon

My girl friend has slowly got the hunting itch and now on her second season she wanted to kill a pig. I've focused on lining her up on places of family land by the house where we can get to quickly and she has a steady prop. Saturday evening we finally had a few pigs come out during day light on camera. A sow and 3 shoats. Her and I sat Sunday evening. Saw a yearling doe, but no pigs. She has been studying her butt off for exams to become a teacher next year. Monday evening after work she decided to go hunt by herself rather than study. Nothing showed Monday. For Tuesday, she first decided she would study after work, but decided to hunt. That's what I was hoping to hear!

I had to work a little later than normal Tuesday, and would be getting home little after dark. The very end of shooting light right now is about 5:30pm. At 5:20 she texts complaining that she hasn't seen anything yet. I remind her that's normal and that she still has 10 minutes of prime time. A few minutes later she calls.....

Her: ASIDFHOSIH SDIHSONW WOEURHOERN WEORUWEROHWROOOO
Me: Slow down I can't understand you.
Her: OIOEUIRWERN QNOUSTY CKUTNSLSUITHE ANCOIWT
Me: I need you to slow down I can't hear what you're saying.
Her: ASLUIERNQ "I SHOT A PIG" AMWOUNELWEOUN "WHERE ARE YOU"
Me: I'm on my way home. I'm almost there. Just stay in the stand.

I wish I could have that conversation recorded, so I could remember it all. It was great. I got home, grabbed boots, backup light, and went to where she was. I met my dad, jumped on the 4 wheeler with him and road to the stand. We got to the shot site, got the details of the shot, and started looking for blood. Initially there was none, and I started to get nervous. She said she knew she it because it paused a second before it ran. Then my stomach churned. It began to look and sound like a miss. Then to mine and Dad's surprise... "Here's blood!" Sure enough she found a tiny sliver of blood at the shot site that we overlooked. We followed specks of blood for a few yards. At one point I found a piece of bone, and began to worry it may have been hit in the leg. My dad found blood before it crossed a fence. I walked around through a better opening to look for blood on the other side of him. Before I crossed the fence I shined the light in the general direction it went and saw good blood. A huge sigh of relief. Followed good blood in the thicket for another 20-30yds and found the sow. Very nice size sow. Ended up being a good shot that took out part of the heart. It didn't exit and took a little while for it start bleeding good.

Seeing her reaction was great! Happy dance and all! We got the pig quartered and in the fridge. Tonight will be tenderloins for supper. 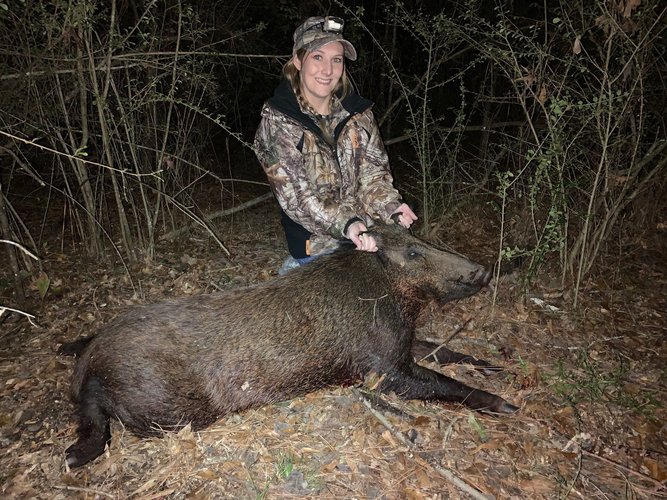 This is awesome! Congrats!

It’s always worth it to go hunting instead

Congratulations to the hunter!

I'm in to this hunt. Very cool.
I want to congratulate your wife but don't want to be treated like Chris Collingsworth complimenting female Steeler fans.
F- it.
The truth is FINE JOB!!!
R

Nice, you saved a lot of deer corn and property damage also a memory you will never forget!!!
H

Congrats!! Always fun to see the ladies get excited about hunting.

That's awesome. I hope everything else is going good your way.
G

Congrats! Thanks for sharing!
C

YEEEAUHHH! All alone too that’s so awesome. Congrats! Always wanted to try a wild hog
You must log in or register to reply here.

O
A birthday gift for my wife