My dad, the lucky bum, stayed home in PA while I went hog hunting in TN (thread). He got this bear on opening day of PA's bear season on the neighbor's farm. He was hunting alone, but benefited from a group of hunters pushing a field of standing corn. The bear ran out 90 degrees to the intended direction of the drive, by my Dad who happened to be standing there. Three shots with his 9.3x62 as it ran, and then one shot to finish it. He was able to drive his truck and trailer within about 15 yards to recover it intact. It weighed 308 pounds when checked in with the Game Commission.

Coincidentally, this is the second bear my dad has shot off a drive by the same crew of hunters. First one was about 25 years ago and 10 miles away, also a complete coincidence of being in the same area at the same time. I was a little bigger than my son is now, but that bear was only about 70 pounds. I'll try to find and post the picture of me and my little brother with that bear. 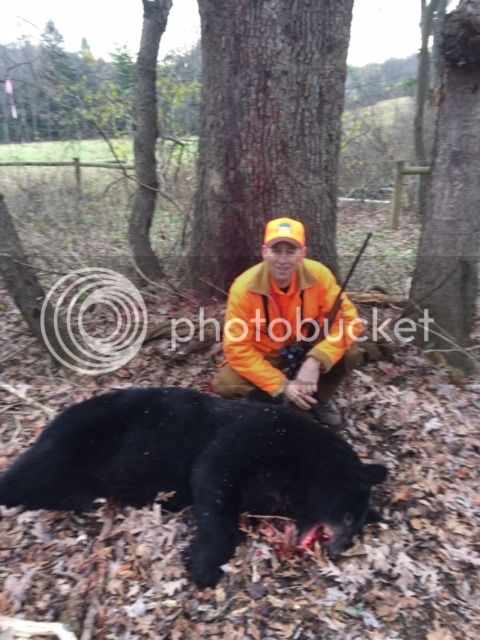 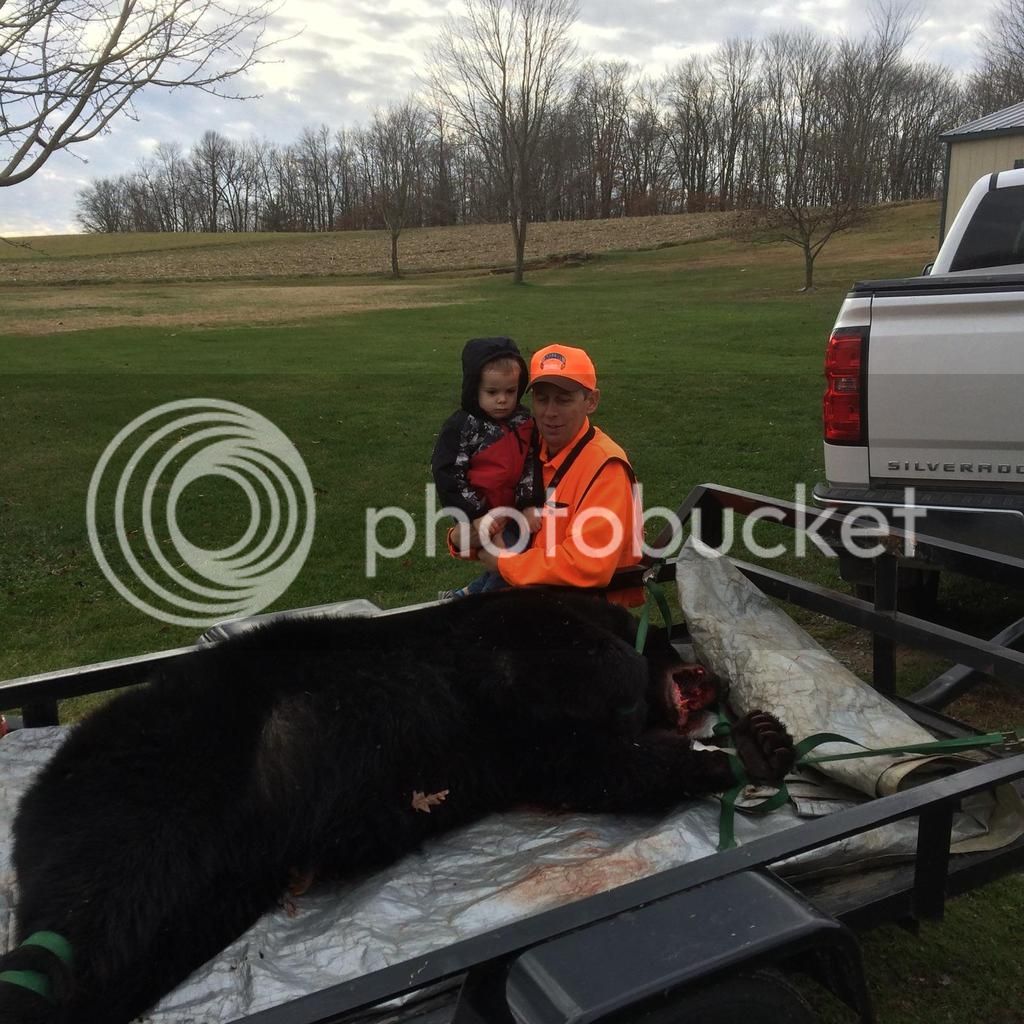 First day of buck season rolls around, and Dad hunts from his newly constructed permanent stand on his farm. My Mom went along to watch and shoot a coyote if she had the chance - Mom's first day of hunting ever. Dad had looked up legal shooting hours the day before. When he looked at his watch and it was time he leans over and tells my mom it's legal hours. About 2 minutes later she spots this buck, taps my dad's arm and points out the deer, and he drops him with his .243.

This buck has made a living out of surviving close calls with us over the past 3 years. He stopped broadside right in a shooting lane in front of me on the last day of rifle 3 years ago, when I had already filled my buck tag and had to pass him up. He's come by my dad 3-4 times in the bow and rifle seasons since, always just out of range or behind some brush. He's a main frame 10-pt with little sticker points on the end of each main beam. 20" outside spread and 10" G-2's. 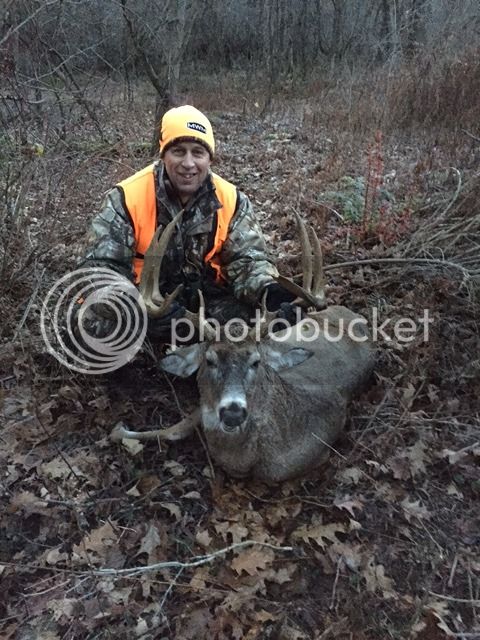 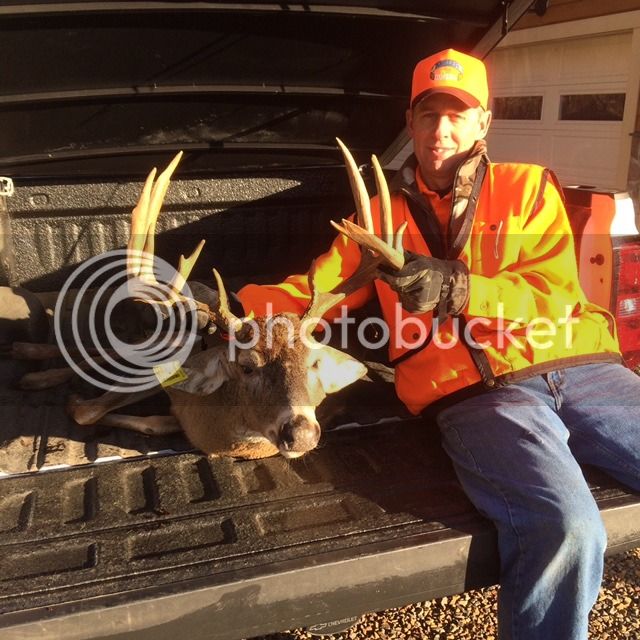 ETA: The buck was clearly a big buck 3 years ago when I had to watch him walk by, so I'd estimate he was 3.5yo then and 6.5yo when killed. Dad also thinks he has a shed from this buck, so I'll post that picture when I get the chance.
Last edited: Dec 2, 2015
K

I grew up deer hunting in Pennsylvania. That's one of the nicer deer I've seen from that state in quite some time. Congrats to your dad on the bear and a great deer.
1

That's a banner year! Congrats to your dad!

Wow.. Great buck and bear too. Looks like the bear tried to climb that tree?

Awesome year! Nice bear and brut of a buck for PA!
Congrats to dad!!
M

Great bear and even better buck! I lived in PA before I moved to Colorado and still try to get back every other year for Thanksgiving/deer season (but not this year). What part of PA does your Dad live in? These pictures definitely make me miss PA hunting. Western hunting is wonderful, but the tradition of Pennsylvania hunting just can't be replicated .
T

We're in Brookville, in the western part of PA, in mixed farm/woods country. My dad and I don't work our farms ourselves, but we each let a neighboring farmer grow crops or take hay from our places. Add in a couple food plots for hunting over, and it's a pretty nice setup for deer.

LCH - You're right - the bear did climb the tree a short ways, but was hit hard by that point.
S

That is a pretty bear! Great hunt.

I grew up deer hunting in Brookville (Coolspring, actually)! A family friend's 'farm'. They called me 'half-rack Jack' for more years than I care to remember. Fun country to hunt deer and grouse in. At least one from our camp would encounter a bear every year.

Used to love stopping in Puxy for lunch. Place made 'burgers' but they were crumbled ground meat on hot dog buns. Were like 4 for $5 or something - killer good!
Last edited: Dec 2, 2015
D

Festus said:
I grew up deer hunting in Brookville (Coolspring, actually)! A family friend's 'farm'. They called me 'half-rack Jack' for more years than I care to remember. Fun country to hunt deer and grouse in. At least one from our camp would encounter a bear every year.

Used to love stopping in Puxy for lunch. Place made 'burgers' but they were crumbled ground meat on hot dog buns. Were like 4 for $5 or something - killer good!
Click to expand...

Our original family farm was in Knoxdale, so not far from Coolspring at all. We've probably grouse hunted some of the same hillsides. My grandpa and great-uncle were involved with the Coolspring Engine Show at the beginning, before the power museum took things over. I've been going to the show every year since I was a kid.

wow those are both dandies
7

Holy Crap! Banner season for sure. Nice!
B

WOW! What a season for him. Hope he gets the Triple Trophy
D

big28hunter said:
WOW! What a season for him. Hope he gets the Triple Trophy
Click to expand...

He took both of his animals to our taxidermist, who's a serious turkey hunter and offered to help him get a gobbler in the spring to mount. It would be pretty cool to have a Triple Trophy season and have them all mounted.
P