I took a couple of my daughters out into the hills last weekend. My oldest daughter had a NM youth tag burning a hole in her pocket. On opening morning, we immediately located deer feeding on the hillside. There were a couple forkies in the group, but nothing we were interested in. A few minutes later and from a different glassing knob I located a buck emerging from a pocket of brush low in the canyon. He was followed closely by four other bucks.

After looking the bucks over for a few minutes, we decided there were two bucks in the group that were worth taking home. We made a plan and hustled to get into a solid shooting position. It didn't take long for the oldest buck in the group to give us a broadside look at 275 yards. I helped Abby find the buck in her scope and shortly after, the trigger broke and the bullet perforated the buck's vitals. The buck immediately kicked, ran a short distance, and tumbled into a draw near the canyon floor.

All three of us celebrated together for several minutes while taking pictures and recounting the moments leading up to the shot. Opening morning was a success and Abby came home with her best mule deer. 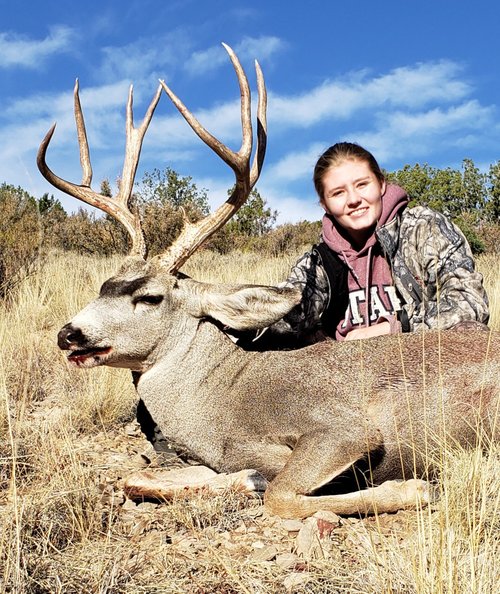 Nice buck for the wife
2