History Found In the Field

diamond hitch said:
Theat, the piece of machinery in your picture is an Ingersall Rand compressor.
Click to expand...

Most likely used to power air drills. Gardner-Denver used to be one of my accounts back in the early 70's. 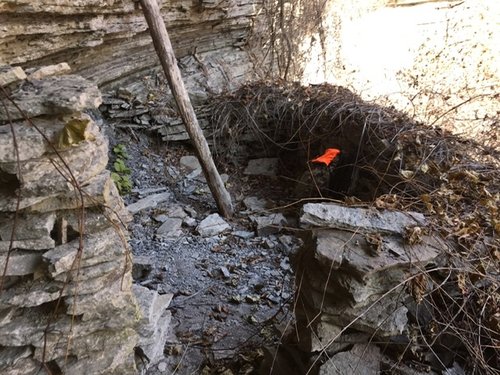 I’ve wondered if this is some old historic relic, or perhaps the work someone more recently. Either way somebody took the time to stack up a bunch of slates in the side of this rock face near a waterfall. The spot is in a cut of the mountain so it’s a large natural over hang. Pics don’t do it justice but in the front of the picture to the left and right is the entrance. And where my pack and rifle is leaning is the rest of the horse shoe. The front of it, now grown up in vines, looks out of the eroded hollow.

It’s in a wilderness area in Arkansas. Not far from an old road in the woods. As many public places it’s likely more visited that I suspect but if you do a google search of the waterfall where this is located there’s only a couple write ups on hiking pages visiting it as opposed to every Tom Dick and Harry going to look other water falls in the mountains. The people I spoke with at forest service office have never been there because of the long walk.

If it is something of history, my guess is that it was where someone had a stile back in the day. In another drainage not too far away, there’s some caves that were used by a couple outlaws in the early 1900s. Maybe a relic from them. Or maybe others like me felt the need to add a rock to the wall before leaving the area.

This is a photo taken while standing from the makeshift hide out. 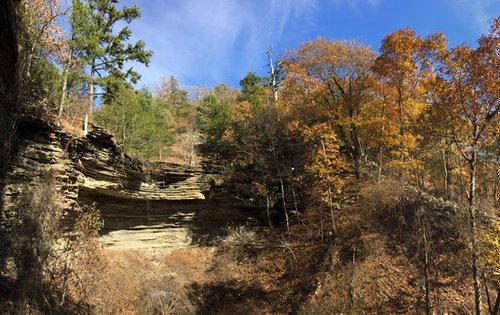 Tarheel, I stand corrected. Must have been a brain fart. They powered drills, slushers, tuggers and a variety of other air powered tools.
D

We found this rifle on our ranch. We were able to get it cleaned up enough to find the serial number and I sent it off to the museum in Cody Wyoming and get some information about it. 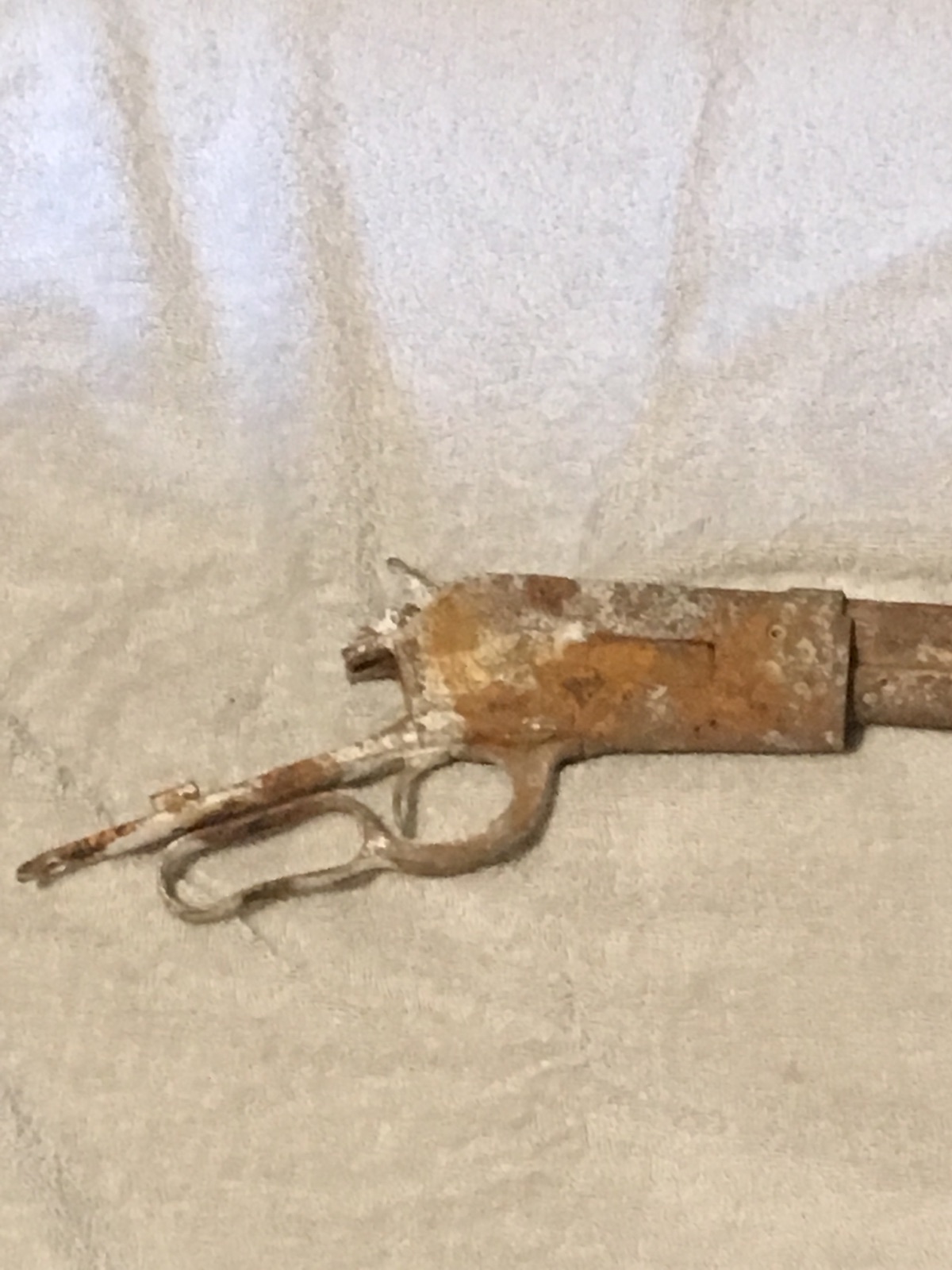 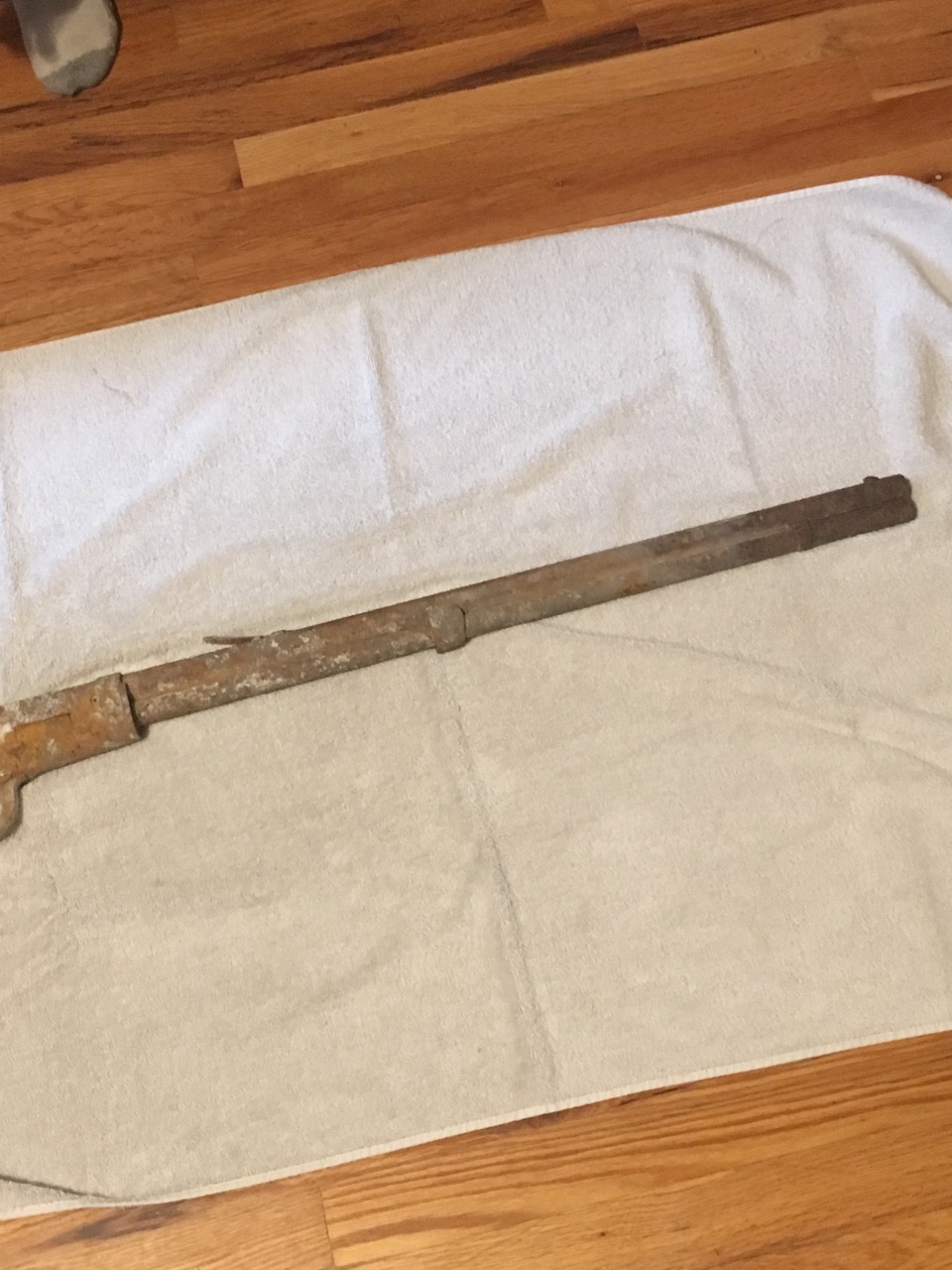 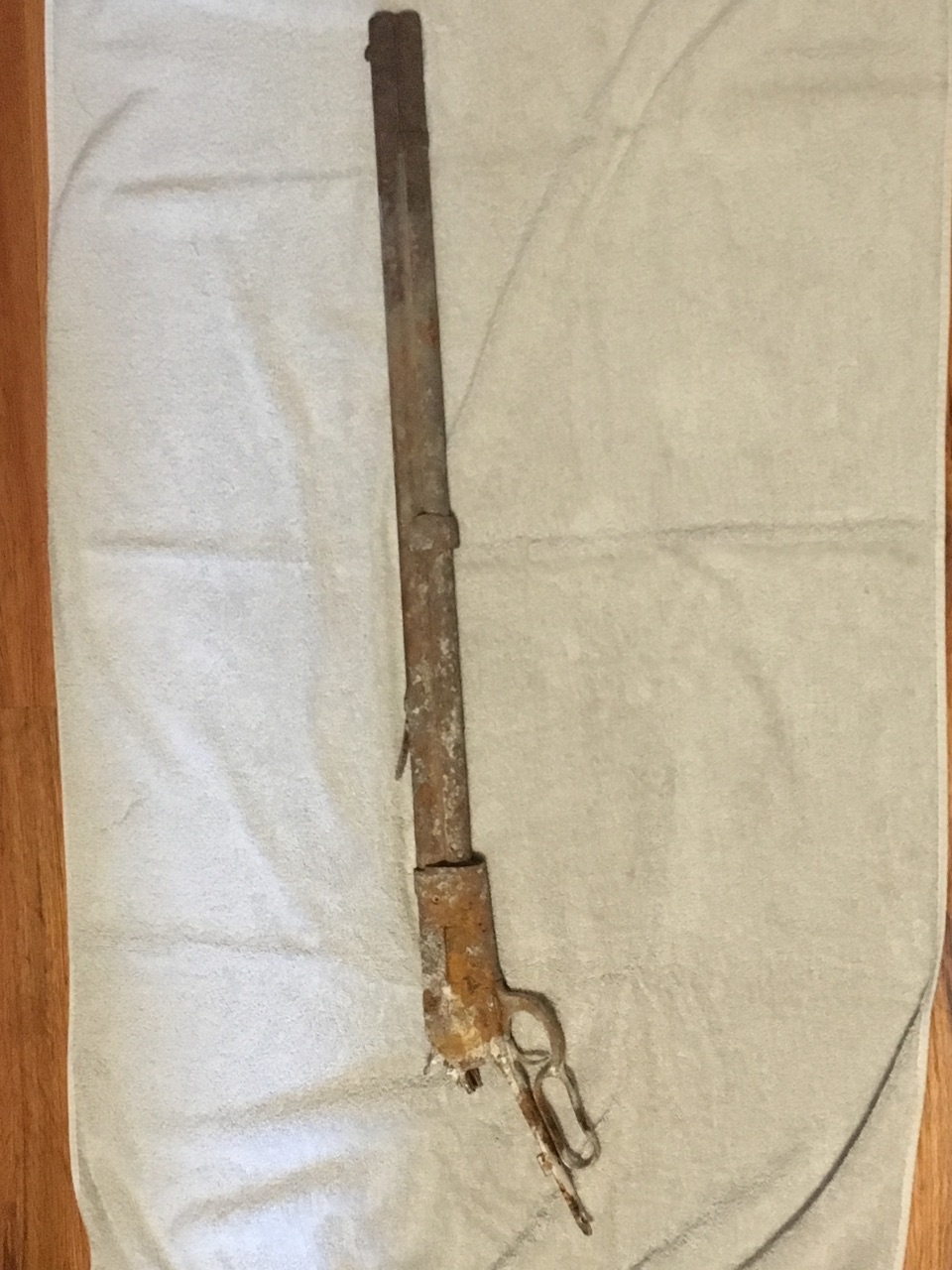 Found an small old homestead type dump off a logging road up in the coast range had bottles in it 2015 and pulled this out , it mid 1960’s I believe and couldn’t believe it had been in the woods 50 years and somehow the painted type label never faded 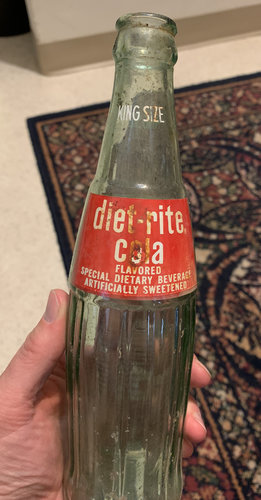 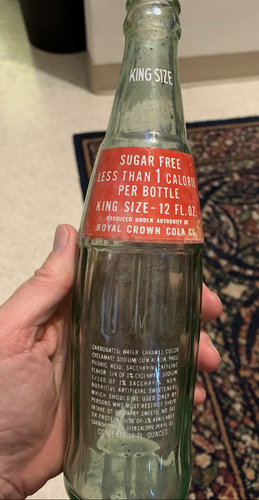 I also found these 2 old what I assume to be small glass beer bottles in the same dump, but since I was born in 1969 I wouldn’t have a clue what brand they would have been , the green one has raised lettering that says “ No deposit no return“ on one side and “ Not to be refilled “ on the other side ...Ha, the old days , On the bottom of the brown bottle it says “ no deposit “on one side and the other it says “please help fight litter” 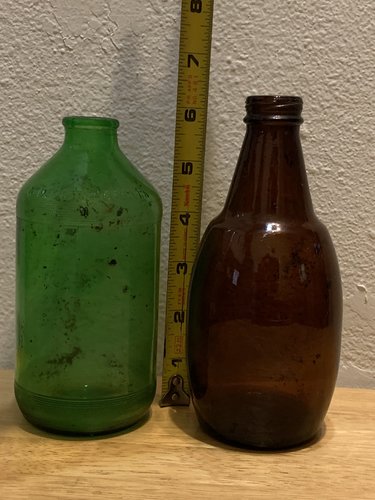 A customer of mine in the deep south was doing some remodeling of a facility along a river and they dug up an old cannon ball
from the civil war. From what they could find out, the site was an area where the Confederates ( no doubt Lamb's ancestors)
test fired cannon's.

The brown bottle looks like a Heidelberg Beer bottle. Screw top tho so not that old.

Claim corners and Tundra Buggy...and I mean WAAAAAAAY in the middle of nowhere. 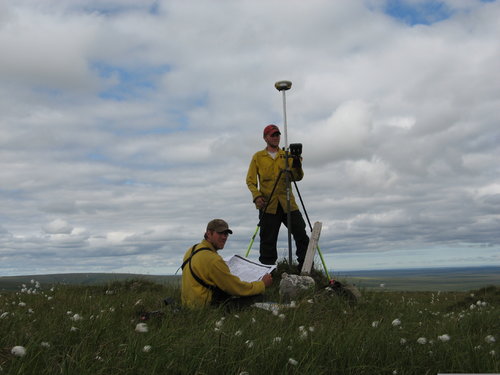 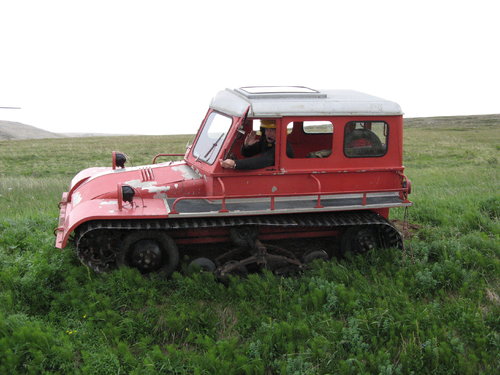 Wow, I bet you could make that sucker run. I would love one of those!

Found an old well on an isolated part of the property. The owner had no idea it existed. 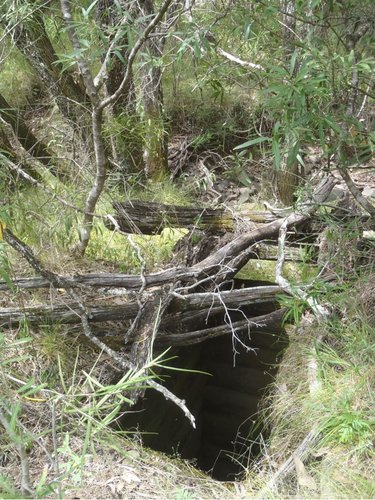 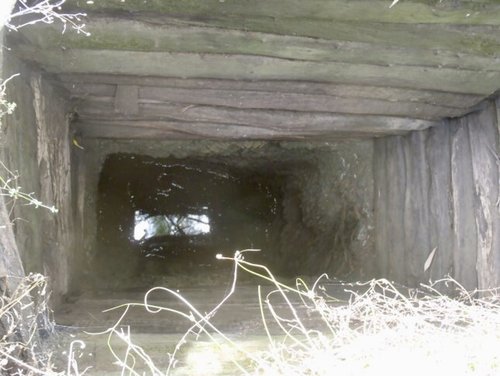 Nunyacreek said:
Your arboreal inscription reminded me of the best one I ever saw/found. It was on a huge aspen in the blacktail of SW Montana and it said
"And God said to the cowboy
Get the hell out of here
This is sheep country"
It was high on a mountainside at the end of an old road with the carcasses of some long abandoned 1940's sedans with trees and brush growing up through the bumpers.
Who says sheepherders have a lot of time on their hands?
Click to expand...

More like tell the sheep herder to get his domesticated beast out of wild sheep country but yea that’s a good one.

I had just found a flint scraper and showed it to him and explained how the Indians had used them to scrape their animal hides. So he started wandering around to also look. Pretty soon he picked something up and brought it to me asking what it was.

He got excited and asked what leaverite was.

So I told him "it's just a rock. You leave it right there."

He then called me a portion of my anatomy.
L

I found what I have been told is a wolf or lion trap in an area that hasn't been trapped for 75 years or more. It was still set and when I slammed it on the ground it slammed shut! Based on where I found it, it probably washed in during a desert flood.

There is a few old logging camps around where we hunt. Couple cool bottles and cans left behind as well as an old late 20's truck that broke down and abandoned.

Just up from our cabin there are tipi rings from where native Americans would winter. I have found a couple bison skulls submerged in the river bank over the years and we have found dozens of arrowheads and Flint tools as well.
You must log in or register to reply here.
Share:
Facebook Twitter Reddit Pinterest Tumblr WhatsApp Email Link
Top