Listened to this one over the weekend. Interesting.
Good to hear from the AZ side on subject & views.
We get nothing really from NMG&F.
Interesting to be hearing the "they eat Coues,Turkeys & rabbits mainly" , here too lately.
I have seen 2 packs & 3 loners in 10 years. I watched the 1st pack eat a elk calf live from my truck.
I have seen many dead elk carcasses. Lots of the Gila has NO deer sign present.
I have heard of neighbors loosing several head of cattle too & have to battle FW to get repaid, if they do get a determination of death.
I have seen one cow carcass that I think was Canines of some sort....I do know dogs do it too. Kill for fun.
A grey wolf could easily take my Doberman, who devastates coyotes.

How long have these wolves been in AZ? Has there always been a resident population or did they migrate up from Mexico?

NM & AZ.
I am sure of the start date of recovery program. 2000-2005?
I know some of the wolves were from rescue centers & supposedly a few wild ones captured.
Find it hard to believe any are in Mexico.
90% of original range was Mexico. 10% was AZ & NM.
I also do not know if any are pure Grey Wolf.
I don't know a whole lot as the story seems to change.

Was a great podcast. Very informative.

Yeah, i shook my head a lot while listening to this podcast. My parents and uncle both own ranches in basically ground zero of the wolf reintroduction in the late 90's, early 2000's and i spend a lot of time around them. Some things i can add are:

1. there are a LOT more wolves than they want to admit. If they were honest of their speculated numbers, their objective would have been reached a long time ago. I see them nearly every time I am in their core range (AZ unit 1 and 27). Most wolves i see anymore are not collared. seeing packs of 5-10 is not uncommon.
2. they DO NOT only eat turkeys, coues and rabbits. They kill a LOT of elk, deer and cattle. Got a photo a few days ago of one harassing my uncle's cattle(below). I find it hard to believe it was trying to make friends with the calf. Just last week, a friend found a bighorn ram that was either killed by, or just fed on by wolves.i have seen them actively pursuing and feeding on elk many times. FW NEVER reimburse ranchers for cattle loss due to wolves. they always blame the death of the cow on something else.
3. They are not 100% pure Mexican Gray. although the bloodline is probably mostly pure at this point, the original bunch of reintroduced wolves had a good percentage of domestic dog blood in them. They aren't much more impressive than a coyote in looks and size. I bet most of them that get shot is because of mistaken identity. you really have to look hard to figure out if they are a wolf or coyote. at a quick glance, it is near impossible to tell a difference. You can tell more so by behavior, rather than looks. 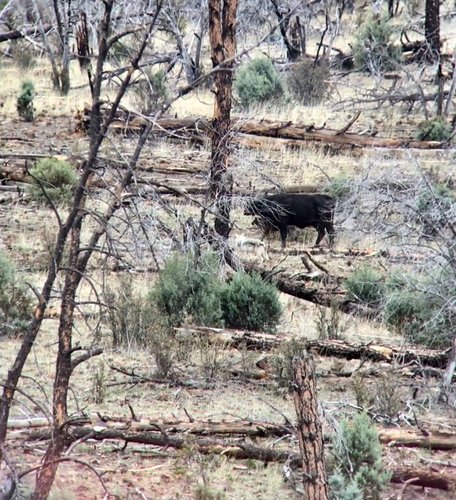 I like the mistaken identity is why they are shot. Absolutely right, Breed to fast and NMG&F cannot count. Scourge to the Gila. Hope they do not migrate to central or SE NM.

They have been sighted in the Bosque near Socorro & around Grants. So much for zones.
They do eat lots of elk deer & cattle.
They are all mixed breed canines from refuges....wolf/dog refuges.
They can weigh 75 lbs & breed with coyotes & dogs.

Really good podcast. Steve Rinella just had a wolf biologist on too and that was also interesting.

Good podcast. Good info in the posts above too. There is rumbling of introducing wolves into CO. Apparently wolves just moving in naturally isn't fast enough for some folks. Asinine. The AZ guy with Randy was even against CO introduction of the gray wolf since since that would certainly mess with the Mexican wolf population in AZ and NM. I never cease to be amazed by people who think animals care about state lines.