So been bored this last week and started a quick project. Over the years I’ve given a majority of my deer racks to a buddy that had more use for them (knife handles, drawer pulls, lamps, etc.) than I do with them gathering dust. There are a few I’ve kept and now want to tinker with.

One was my first Oregon bow kill from years ago. It’s a small buck, velvet was coming off at the time and has completely turned to dust over the years, along with the skull plate splitting and flaking away.

So I bought one of those Mt. Mikes fake euros (yeah…I know

) and began playing with the old horns. 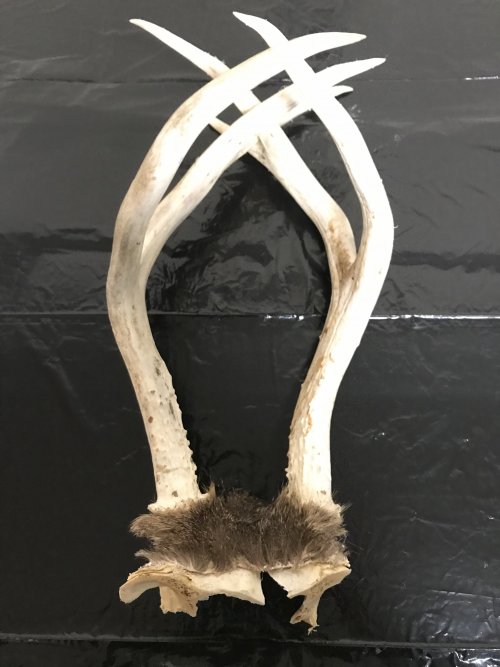 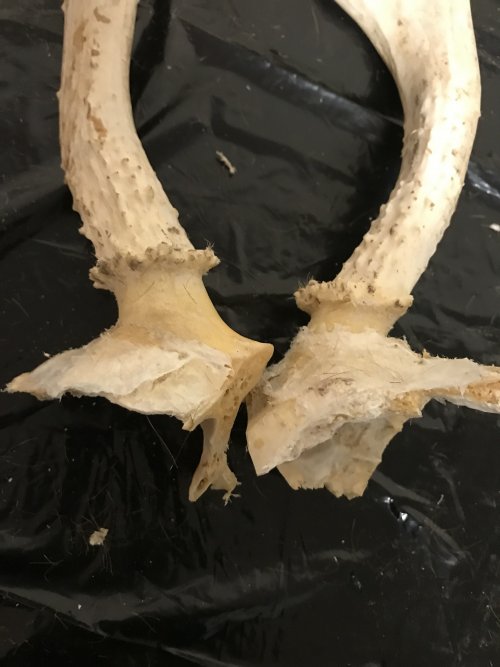 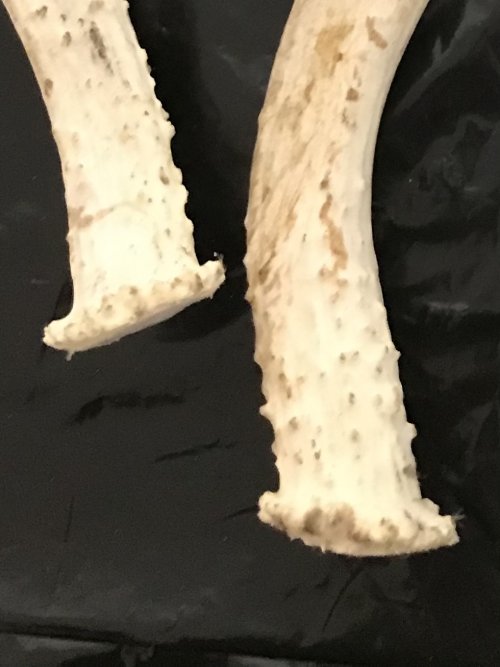 Measured between the fronts so it would be similar to the original spread, stripped the rest of the velvet, and cut the horns of the plate. 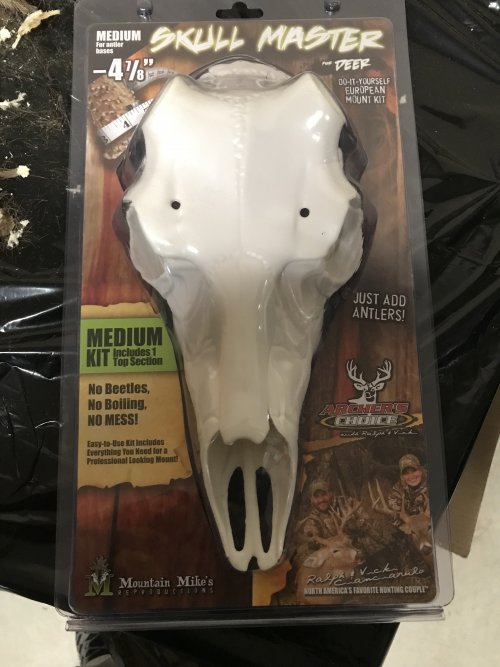 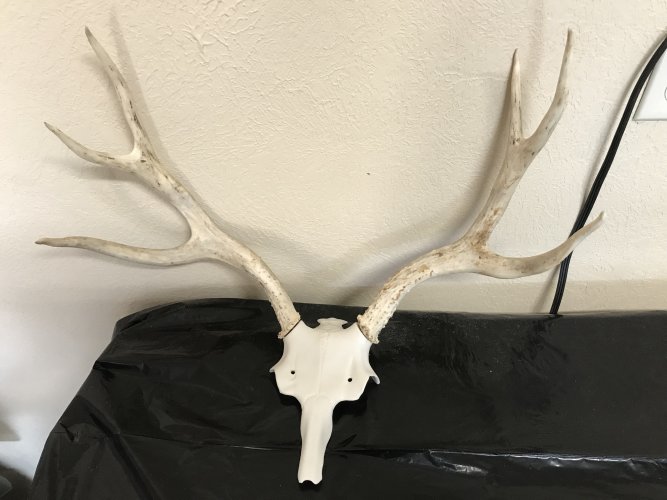 Then I had taken a ride out to the reservoir and found a mud patch (lakes low, lots of colors to choose from) to grab a bucket of goo. 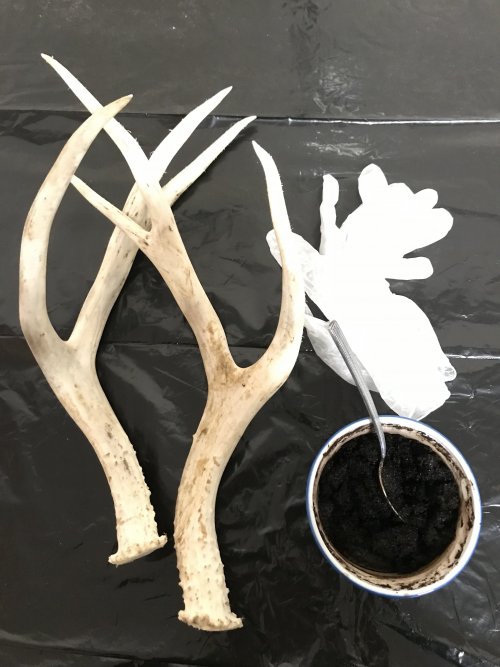 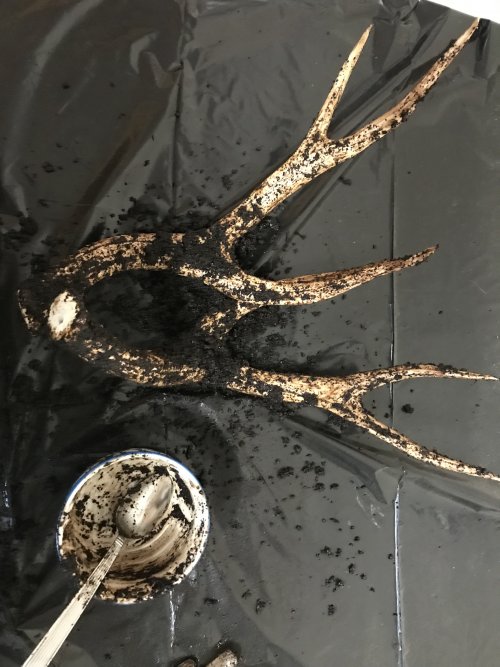 Came home and lightly sanded the horns and then rubbed in the mud. It was coming out lighter than I had wanted so I added some coffee grounds to the mix. Let dry, and then repeated till I was happy “enough” with the color on the horns.

Screwed it all together and “walla” it looks just like horns on a piece of plastic. 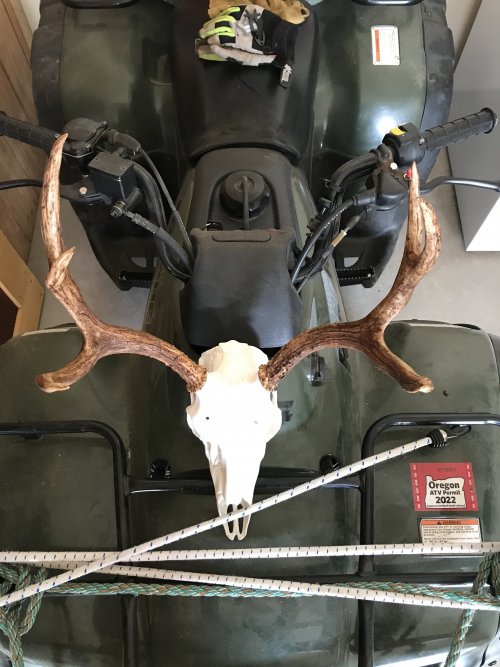 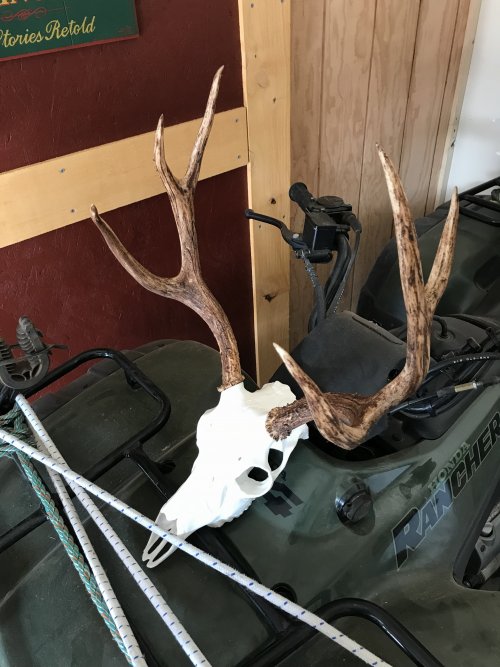 Ergo my question to the group, any suggestion on what a how to paint the plast-o-skull so it looks at least halfway decent and that the paint will actually adhere decently??

How about a wood rasp/file, then wood stain and
wipe it down with a sponge?
If that doesn't work you can boil it and make a European mount. lol!

Looks pretty good! If the plastic will take paint, maybe just a coat of an off-white matte paint to mimic bone?

Yeah kinda a quandary…my real euros I wish were whiter, this I wish wasn’t 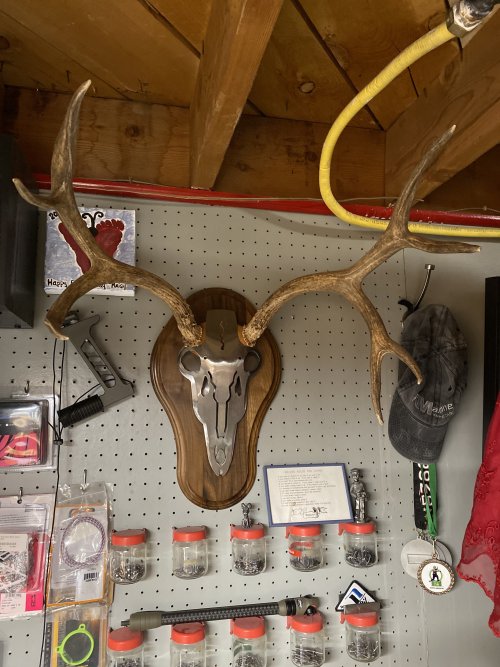 I did this with one I regretted skull capping.

Outlaw Skulls and Pinchback Counterfeit Repros are the way to go. 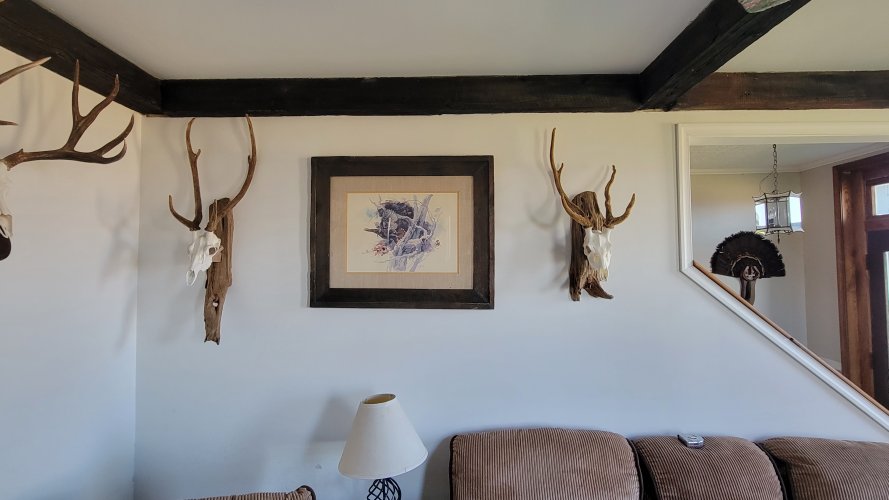 JT13 said:
Outlaw Skulls and Pinchback Counterfeit Repros are the way to go.

The one on the left is the fake. 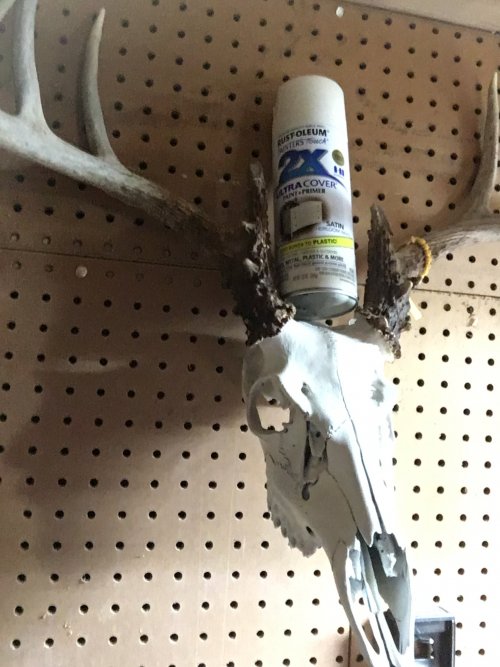 Color is “heirloom white”. It’s a good bone color. Just 2 light coats so it’s not too glossy. They didn’t have a matte version at the store, it would have been better than satin.

jeremys4 said:
The one on the left is the fake.
Click to expand...

It's an Outlaw Skulls spike buck whitetail repro with an axis deer set of antlers. Looks pretty good though, huh?

After much comparison and deliberation, it was the closest anatomical match to an axis skull we could find. A little to "white" and "clean" but otherwise, looks awesome

After much comparison and deliberation, it was the closest anatomical match to an axis skull we could find. A little to "white" and "clean" but otherwise, looks awesome
Click to expand...

I cheated I went back to your honeymoon post and verified which had the skull.

jeremys4 said:
I cheated I went back to your honeymoon post and verified which had the skull.
Click to expand...

I agree with the offwhite rattle can idea. Matte is ideal. I actually sprayed a few actual skulls that were in rough shape.

Rzrbck918 said:
I agree with the offwhite rattle can idea. Matte is ideal. I actually sprayed a few actual skulls that were in rough shape.
Click to expand...

How did those turn out, I have one that I buried that got stained with the minerals in the soil that will lot come out. Had a taxidermist that I no longer use try to fix it to and ended up spraying it with some kind of vanish and now it just pisses me off. Planning on painting mine and probably using some lemon oil or something to lighten up the deer antlers because the soil darkened them a bit too

They turned out ok. From 5 feet away you cant tell they are painted. Closer than that you can tell but it was better than the alternative.
You must log in or register to reply here.

How to do an open mouth bear euro.

How to do an open mouth bear euro