Thinking about taking the dogs out west for sharptails and sage grouse this year. I have never hunted them anywhere with cactus. Is there anything I can do to help them besides boots?

I lived in Las Cruces for a bit and hunted quail there. The terrain was brutal on the dogs feet. Boots are a must IMO, and about the only thing you can do.

Ive heard of guys putting Horse hoof treatment on the bottoms of the dogs feet to help toughen up the pads. Not sure if it works but Ive thought about trying it.

Even in Idaho we have some places with enough prickly pear I can't imagine taking a dog into, boots or no. I'd worry about it getting in between the pads.
I would also like to hear what some more cacti experienced k9 owners do.
I 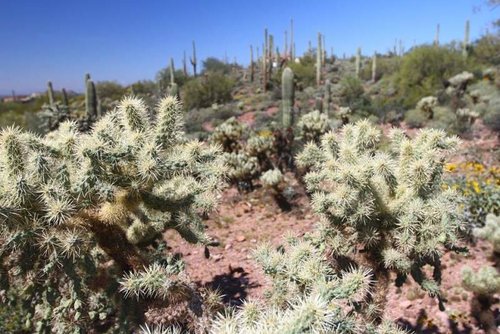 The dog and I are down in AZ for a few and he does great at staying out of the pokie stuff except for these. They fall off in spine balls and end up in the path between patches. had one of the balls end up in his foot yesterday. He let me pull them all out and kept going like nothing happened, he was more upset the ground squirrel outran him.
H

I have never tried them, but I think the dog booties would be the best bet.

I took my dog out for a central Montana shed hunt, and we covered a lot of ground that was covered in prickly pear. We came to an old two track at a right angle, and my dog came to a dead stop on the road and wouldn't follow me into the brush. He had enough, and he was smart enough to know it! I really felt bad for him as I was picking his paws for a week or more.

My brother had a golden retiever that we too quail hunting once in that Cholla cactus country. As soon as he got out of the truck he took off running and came back about 10 minutes later covered in cholla cactus.
It took us about half an hour to get them out from his coat and between his toes. When we finally let him up he took off and did again.
Needless to say we locked him in the truck the rest of the day.
D

I've been hunting prickly pear/pincushion cactus country for about 45 years and have never put boots on any of my dogs, since they learn to avoid clumps of prickly pear pretty quickly, and pincushion cactus mostly show up in heavily over-grazed areas that the birds avoid, too.
In a dozen years of hunting real cactus country, in Arizona, I have avoided places with too much teddy bear cholla, since there are other places to hunt. But, all cholla drops pieces, and unlike the fuzzy teddy bear clumps, several other kinds turn brown and can't be seen as well by the dog. I booted my female Lab with Lewis dog boots, which she hated but tolerated, but have not put boots on my current dog, a French Brittany. After three winters in AZ he has become adept at avoiding some cactus and plants like catclaw. His feet take a beating, but not enough to cause problems hunting. I rest him after a few days.
You shouldn't have much of a problem in sharp-tail/sage grouse country, but I always carry a Leatherman just in case, to pull cactus spines.
You must log in or register to reply here.

My Dusky Dreaming Can Begin😀

Z
Flying with a Dog