Cramps for Gramps - or - Misadventures in early cow hunts 2022

I've had some misadventures on my early cow hunt this year. But I've found a place that is so magical that I'm going to have to name it. If I were on a high dollar NR tag I would be frustrated by these events, but I'm hunting from home. I'm having a blast. (As you will read about below....)

Day one Monday August 1st. It could have been a 2 hour hunt, but I had forgotten my coolers and it was way too hot on opening day. I quietly backed out from the elk. I watched a whitetail doe nurse her fawn for about ten minutes. Then I had another doe and her fawn walk in to within 4 yards of me from upwind. I was standing still on a skid road out in the open. The doe finally figured something was up and we had a staredown while she stomped at me. They turned and stiff-legged out, but never really blew up.

Next day I got into the elk in almost exactly the same place. I set up on a cow which was a little separated from the rest. I snuck in to less than 100 yards, took off my pack and laid my rifle across it. I'm fond of the neck shot for cows because it's a quick kill. less meat damage, all that. "Quick kill or clean miss", Dad used to say. I dialed up the scope and settled in. When I squeezed off, the cow turned little circle and disappeared. I hurried over to where see where I was sure she would be laying. She was in depression standing there looking at me. As I was shouldering the rifle for a finisher, she and a dozen other elk blew out. I spent until long after dark looking for blood, hair, or signs of hit. Nothing. How could I have missed such a chip shot with a zeroed rifle and a solid rest? I got home really late and was pretty disgusted. MRS was convinced I must have tagged out when I drove in after 10 PM. I guess Dad was right.

Got tied up at work on Wednesday, sat home with MRS on Thursday. I wanted to give my spot a couple of days of rest.

Next evening (Friday) I left the 7mmRM at home and took my never-miss .30-06 out of the safe. No elk that day. Lots of fresh sign. More importantly, no carrion birds, so I did not wound and lose the cow I had shot at.

Saturday, MRS and I went to Costco. That was an entirely different misadventure.

Sunday, after church, I took four elk guns to the range and checked zeroes again. My .'06, 264WM and 7RM, and my buddy's 338WM which I have been trying a make shoot better than 4 MOA for him. All my rifles shot lights out. His 338 still shoots 4 MOA and gave me a scope kiss shooting prone off sandbags from my truck hard tonneau cover. The mystery of how I missed was resolved. The 7RM is the only rifle I do not hand load for. Somehow I had gotten 175 grain Federals in my pack that day and the rifle is dialed for 150 Federals. The 175's group OK, but hit about 4" high and left. Just enough to miss a neck shot at 100 yards. When I got home I ran all those Federal rounds over the scale to separate the bullet weights and labelled each round with a sharpie pen.

Yesterday. Tuesday August 9th was the greatest misadventure of all. I finished work early, refreshed the ice in my coolers, and headed out. It was pushing 90°F when I got to the trailhead. I went in about 1/2 mile to my golden spot and decided I was too early and it was too hot. The only sensible thing to do was to find some shade and take a power nap until evening. I don't know if it was the chicken I cooked Monday night, but some kind of dysentery hit me right after I laid down. At first I tried to ignore it, but it was getting really urgent. Rather than soil my fancy hunting pants, I grabbed my poop kit and ducked walked into the timber, clenching. I left my pack, trekking poles and rifle where they were. I didn't have time to dig a hole, I dropped trou and set the new world record for distance. I seriously thought for a second I should measure it with a trekking pole. And then, while I am there with elbows on knees, holding my Sitka suspenders out of the line of fire, a cow elk calmly walks past me at 40 yards as if I was not even there. I was utterly helpless and would be for the next ten minutes. When I got to the cleanup phase, I realized I had sprayed the pack of wet wipes I had laid on the log. It was another ten minutes and a whole bottle of hand sanitizer later before I got cleaned up and all the paper buried. I hunted another two hours after that, but that cow was long gone. I was laughing at myself the whole evening. No more explosive events, though.

44hunter45 said:
I grabbed my poop kit
Click to expand...

A garden trowel, roll of paper, pack of wipes, small bottle of hand sanitizer. Your post is especially funny because there was an outfit at BHA Rendezvous selling a fancy "poop kit" for $50. It was a trowel and some fancy color coded tablets you are supposed to put in the hole with your pile to make it degrade faster. BYO paper and wipes. For $50 I want that provided on subscription.
Last edited: Aug 10, 2022

You may need to see a doctor

I actually wondered for a second if somehow the bowel prep powder had gotten into my water supply..

Colonoscopy jokes - The jokes are on me.

Well, my appointment is tomorrow at 10:00. I'm sitting here typing between trips to the throne room. I'm getting these random thoughts... Thinking of Big Fin's NM chili story. I'm thinking of a NSFW song by Frank Zappa with the lyric, "Buns up...." Things like "When the fluid runs clear, its...

Everyone needs a pilgrim season at some point to educate them.

mdcrossbow said:
Everyone needs a pilgrim season at some point to educate them.
Click to expand...

re-educate? 30 years in Idaho now and no two seasons have been the same. I still make bone headed mistakes that keep me out of the elite, "elk every year" crowd.
S

Closer to "The Silver Saddle. "
K

Blow out ridge sounds good to me.

44hunter45 said:
And then, while I am there with elbows on knees, holding my Sitka suspenders out of the line of fire, a cow elk calmly walks past me at 40 yards as if I was not even there. I was utterly helpless and would be for the next ten minutes. When I got to the cleanup phase, I realized I had sprayed the pack of wet wipes I had laid on the log. It was another ten minutes and a whole bottle of hand sanitizer later before I got cleaned up and all the paper buried. I hunted another two hours after that, but that cow was long gone. I was laughing at myself the whole evening. No more explosive events, though.

How about Poop Chute (or shoot)?

You reminded me of the day I was similarly though not so desperately occupied, cow walks up, I had gun within reach and I got her w pants around ankles. But they weren't Sitkas.

Ahh, then it needs to be dubbed, the Ivy leaks...

elkduds said:
You reminded me of the day I was similarly though not so desperately occupied, cow walks up, I had gun within reach and I got her w pants around ankles. But they weren't Sitkas.
Click to expand...

My Dad got his biggest muley buck this way. Rookie mistake on my part not to have my rifle with me.
O

Sounds like my mess this morning for the deer opener....

I took my project AKA Toyota POS. I have been messing with it for a while and have it running ok. A few weeks ago, the battery went dead. I traced that to a bad ignition, and leaving the key in. I put the battery back in the other day, and it has been starting and running fine.

I am hunting 10 minutes from the house.

Got to the spot I wanted to park, lights started going dim. I shut it off, amd dead, nothing. Damn... alternator not charging I thought.

Whatever, I'll hunt and then when I'm ready I'll walk out and call my wife...

Go to grab my pills, and main med is gone. Likely sitting on the table where I took them last night and failed to put them back I the bag..

Uneventful morning, and I do see a few does and fawns. But no bucks. Get a message out to my wife, and she says I have your meds..

I let her know I need a jump, and have her come up.

She arrives a few minutes later and takes me the mile back up to my Toyota. I pop the hood, and look things over.

Negative battery post popped off. I failed to tighten it when I put the battery in the other day

Put it back on, starts right up.

Thanks for my meds honey, and we parted ways.

Now I'm home because of a flood advisory, and it did flash flood up there yesterday. I don't want to be caught in that crap.
B

If you dialed your rifle for a 100 yd shot, where do you normally have it set at?

BenInMT said:
If you dialed your rifle for a 100 yd shot, where do you normally have it set at?
Click to expand...

I used the word "dialed" in this case for magnification. I don't have CDS in that scope. It is a Zeiss Conquest HD5 2-10x42. I walk around with it on the lowest setting and I cranked it up to 10x

It has this reticle, which pretty close to my ballistics. I zero dead on at 100 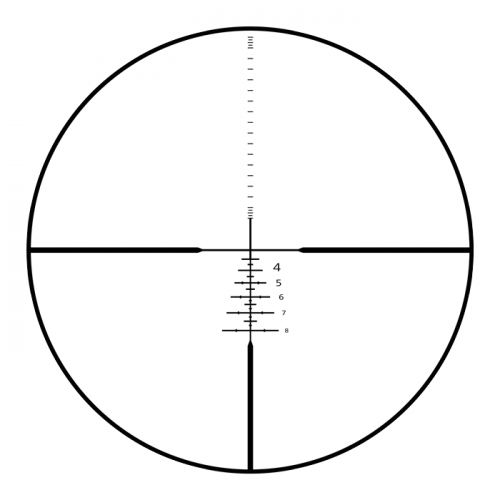 I was on an older skid road. Right as it opened into an active logging deck, I spotted an elk butt sticking out of a thicket. The thermals were against me, but it was across a small valley a little up the other side. I was hoping there would be a steady thermal down the valley bottom to divert my scent.

I got out of my pack and set it up for a rest. Ranged it at 163 yards. I still couldn't see the elk's head. I settled in behind the rifle and waited for it to show its head. I was wrong about the thermals. It was a cow and there was a calf with it. One of them winded me and they barked and blew out.

I gave them my best, "I'm a cow too" chirps on my diaphragm call and they stopped. The cow was facing left quartering away. The calf was too, in front of her, covering her vitals!
I blew the cow call again and the valley erupted with whitetails. The elk blew off into the timber and I never had a clean shot.
I ranged the spot where they were stopped at 260. Still a dead on hold for me zeroed at 200.

I am having fun, but I would kind of like to get this done so I can fill the woodshed and hay barn.
Last edited: Aug 17, 2022
You must log in or register to reply here.

Saturday at 10:16 AM
duck wrangler