Been a fun deer season for me so far even though I havent pulled the trigger yet. Second morning of archery I helped put a young man on his first buck with his brother by his side.

Now, opening day, I sent my buddy into a spot I know and he filled his tag with his first buck! He was there with the brothers and I during archery for their buck, but this time he was solo. Hats off to a guy who backpacks in solo for his first buck.

So I told him Id help pack it out if he got one since he didnt know what he was doing to cut it up, and to just call me. I live a few hours away. 8:30 this morning I get the call and off I went to the mtns.

On the way up to where he shot it, I stash a few beers for us high on the mtn in a creek on a steepish northern slope, just off a meadow, on a game trail. I continue on another 1,000 feet and meet my friend.

Congratulations, pictures, and down to work “we” go. I had him butcher his whole deer under my supervision cause thats how you learn! Also hes a government worker so I figured he was used to having someone watch him work with little to no other contribution.

Once the buck was all cut up, I took his backpacking gear on my pack, and he took his whole deer on his pack. Figured that was fair and a right of passage for a first buck. The look on his face said it all but it really was an easy packout - a little over a mile downhill to the truck. So off we went.

A quarter way down, we cross the creek where I stashed the beers to get cold. My buddy said grab em and we will just drink em at the truck since its not too far. Sounds good. But there was a problem. I was missing a beer!!!

I put two beers in the creek, between rocks, and this creek is small - foot wide, half a can deep. They didnt float off. On the other side of the creek - big boot prints. So to the beersquatch who decided to just take one of my beers…. That will catch up with you one day.

We finished the hike out and I gave my buddy the cold beer - he earned it. I had a luke warm one from my iceless cooler. Lesson for anybody thinking about being a beersquatch - dont do it. May as well catch you sleeping in my bed. 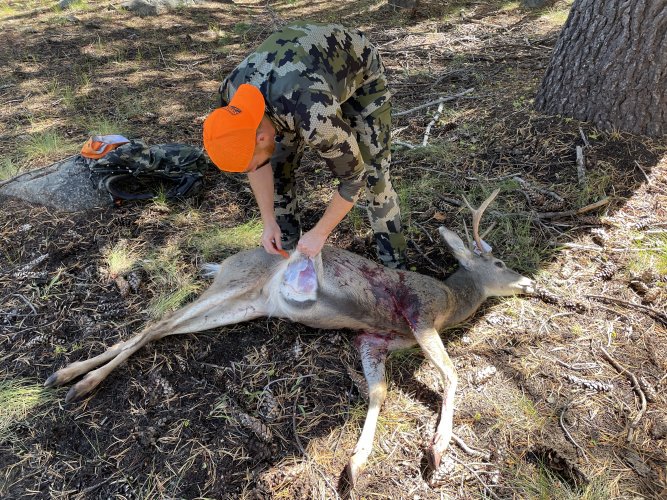 A new life for an old gun